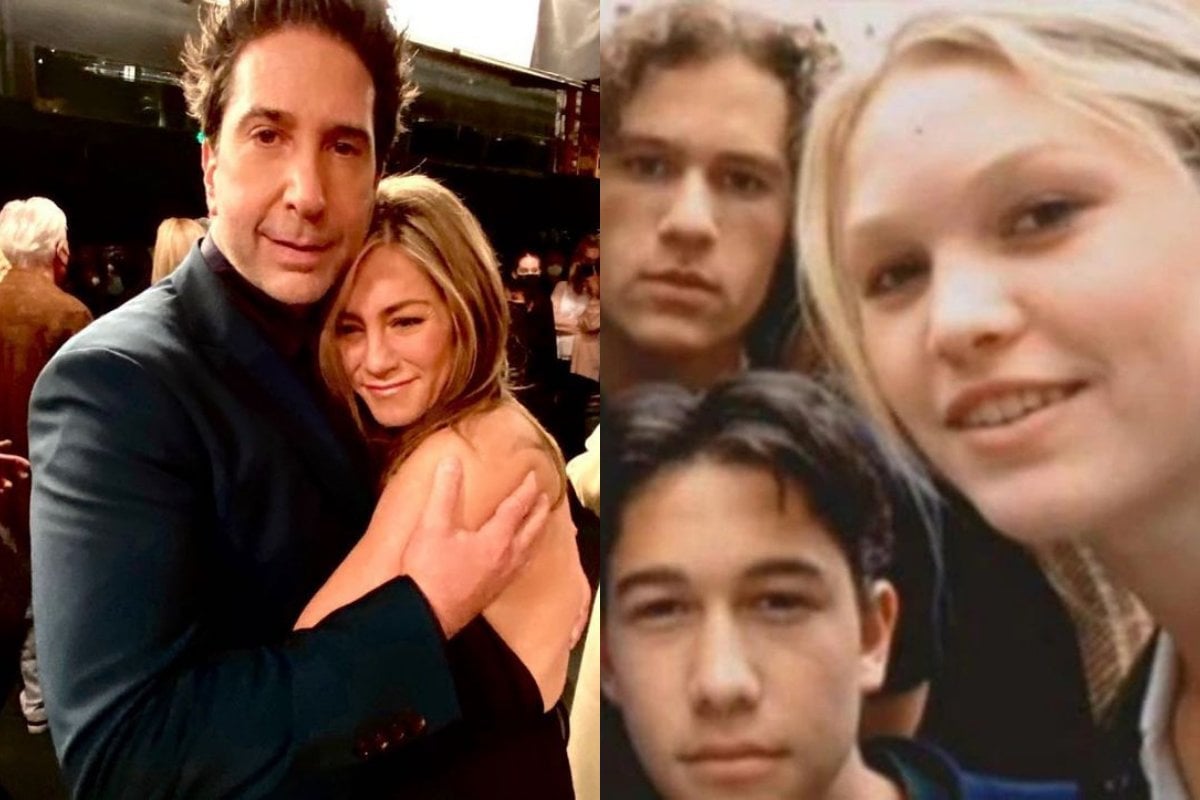 In case you missed it (how?) Friends: The Reunion aired on Binge a few weeks ago, and our all-time favourite couple, Ross and Rachel confessed that they were crushing on each other IRL throughout filming.

"Yeah, in the first season we… I had a major crush on Jen," David Schwimmer admitted, before Jennifer Aniston added that it was "reciprocated".

Watch the trailer for Friends: The Reunion right here. Post continues after video. 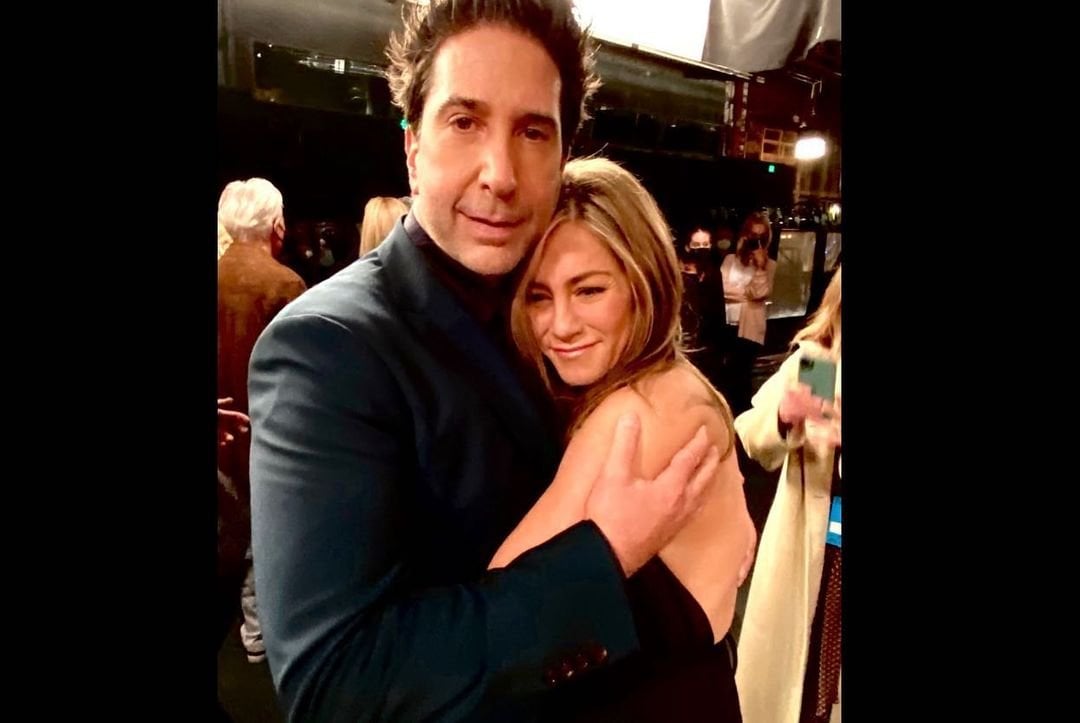 Safe to say, we were Mind. Blown.

There is something so romantic about actors and actresses channeling their romantic passion into their characters and it got us thinking; what other celebs have gotten it on behind-the-scenes of our favourite shows and movies?

As it turns out, quite a few!

So, we decided to take a look back at six celebrity couples that secretly dated on set.

From Ryan Gosling and Eva Mendes to Gwyneth Paltrow and Brad Falchuk here are some of our favourite couples with semi-sneaky origins. 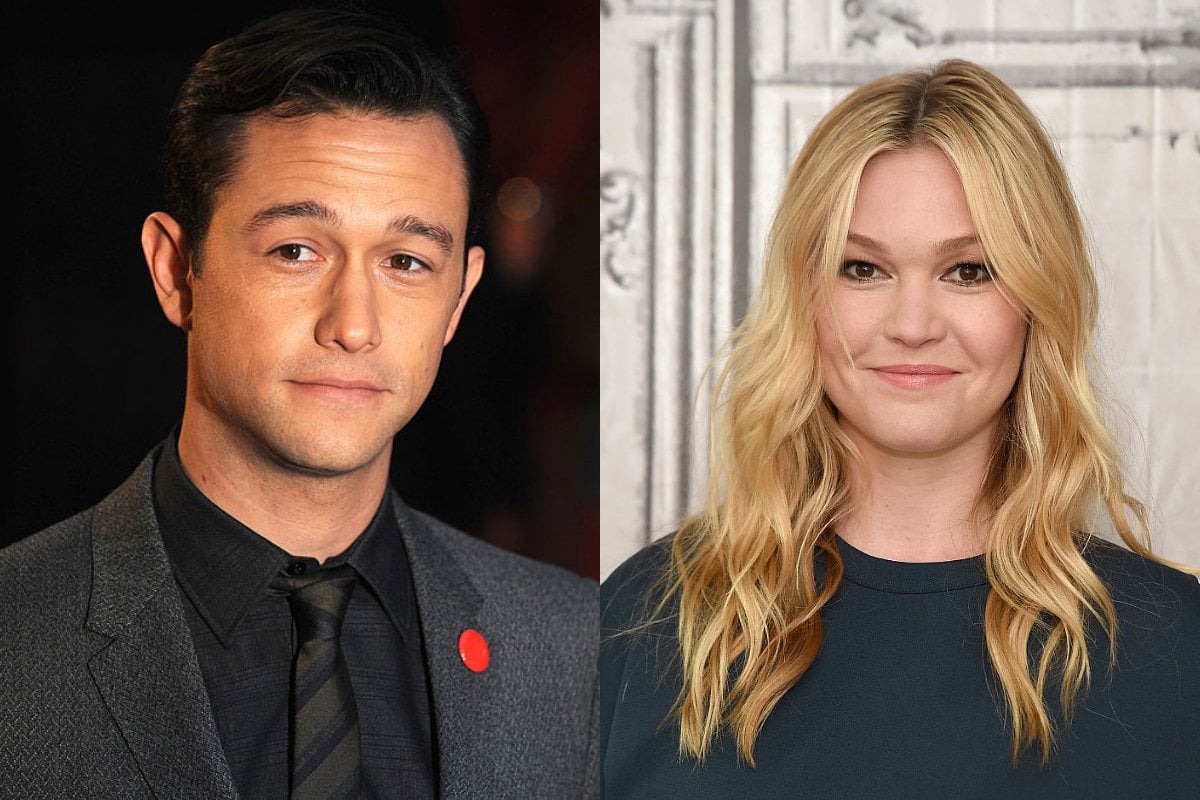 While many rumours circulated that Julia Stiles and her on-screen love interest, Heath Ledger, dated in real life while shooting 10 Things I Hate About You, director Gil Junger has since admitted that there was another co-star who stole her heart.

When discussing Stiles' performance in the infamous poem-reading scene, Junger told Spanish outlet, Mira A Quien Encontre: "I asked her — I said, 'Where did that come from?' And she told me, 'I was just thinking about'... that person’s name that she was deeply in love with at the time."

And just when we thought he'd leave it at that, Junger added: "It wasn’t me, certainly, but it wasn’t Heath either. She, for a minute or 10, went out with Joseph Gordon-Levitt."

"They were very, very attracted to each other," he continued.

"She’s professing her love to (on-screen boyfriend Ledger) and she’s in love with a guy waiting in his trailer to shoot the next scene.

"Watching them, it was beautiful how much they enjoyed each other." 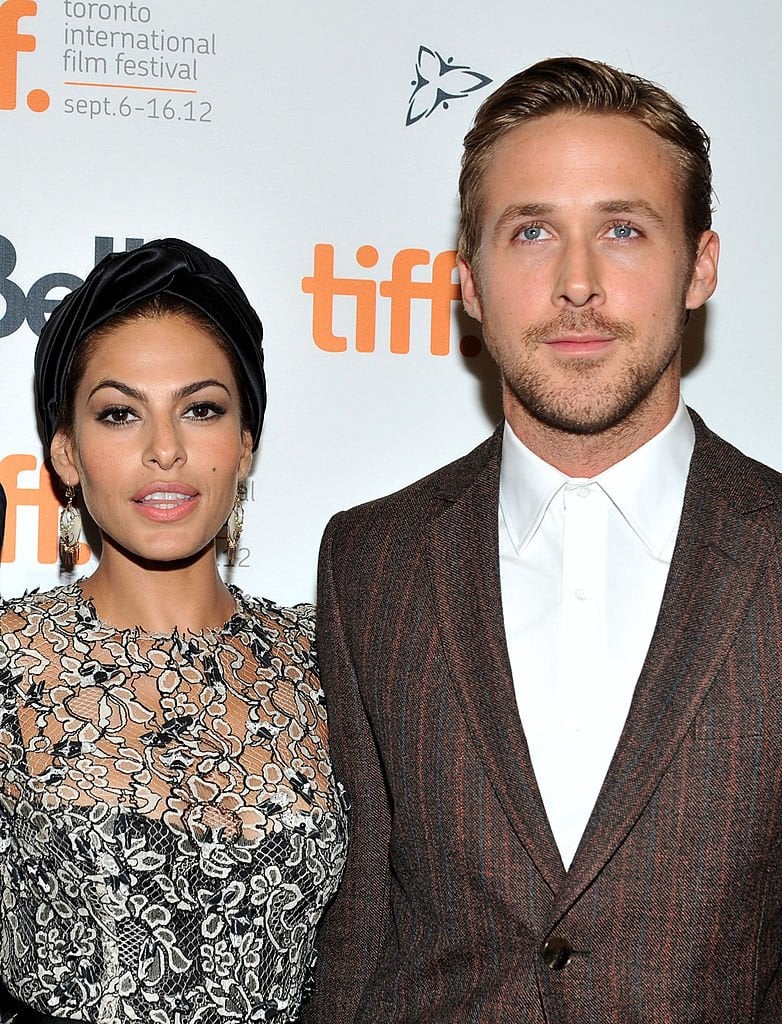 Eva Mendes and Ryan Gosling met on the set of The Place Beyond the Pines in 2011, and have maintained a very private relationship ever since.

In the 2012 drama, the pair played former lovers who shared a son together,

"They were very playful. Eva was skipping around like a little girl… She would lean into him and she held his arm the entire time," a source told Us Weekly.

"There's always been this strong chemistry between them… this was just a matter of time."

When asked about the relationship later on Ellen, Mendes did her best to avert the question by playfully pretending she didn't know him.

Gosling and Mendes since confirmed their relationship, and share two daughters together. 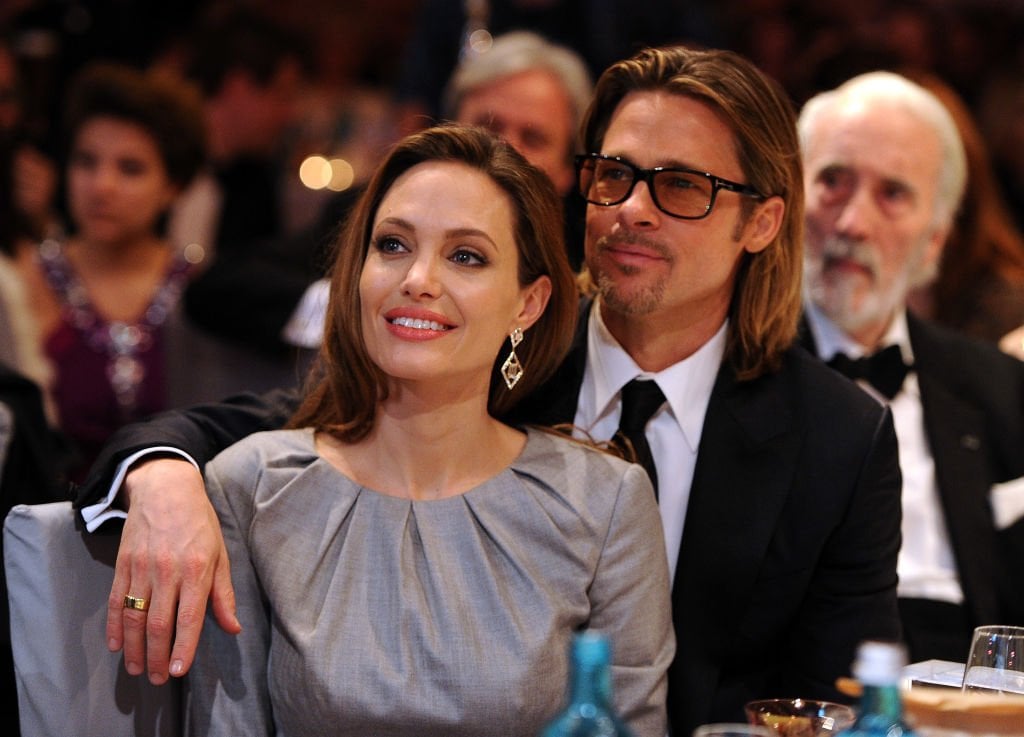 Angelina Jolie and Brad Pitt met on the set of Mr. and Mrs. Smith in 2004 when Pitt was still in a relationship with Jennifer Aniston.

At the time, the pair denied rumours that they were in a relationship, until Pitt officially announced his divorce from Aniston in 2005.

"Because of the film we ended up being brought together to do all these crazy things and I think we found this strange friendship and partnership that kind of just suddenly happened," Jolie told Vogue in 2006.

"I think a few months in I realized, 'God, I can't wait to get to work.

"We just became kind of a pair. And it took until, really, the end of the shoot for us, I think, to realise that it might mean something more than we'd earlier allowed ourselves to believe." 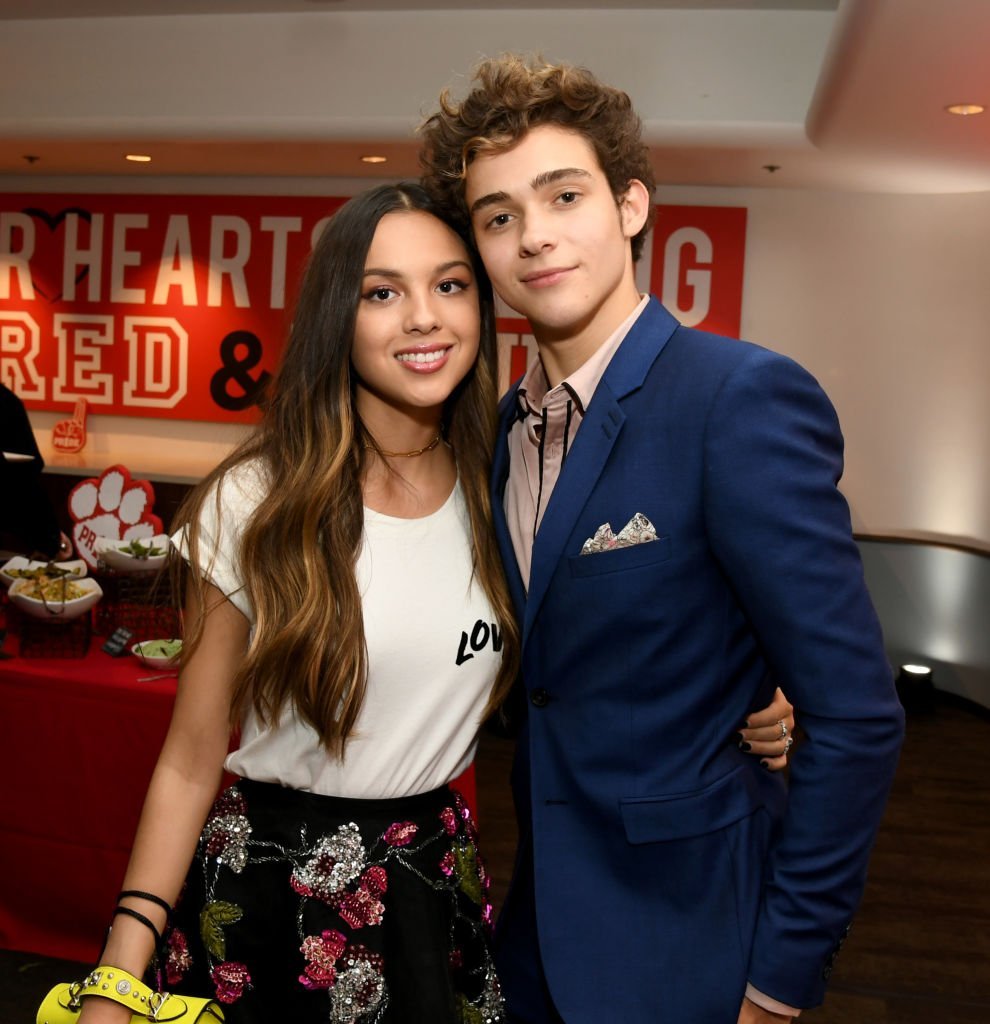 Disney stars, Olivia Rodrigo and Joshua Bassett met while playing love interests in High School Musical: The Musical: The Series, and while they've never confirmed their relationship, their music all but has.

In March 2020, Rodrigo shared a video where she sang a love song with the lyrics: "brown-eyed grin and messy hair", which fans linked to Bassett.

One month later though, Basset released a break-up song, and the pair stopped liking each other's posts on Instagram.

...Since then Rodrigo has released her debut album, SOUR, where she tracks her heartbreak - which of course has been linked to Basset too. 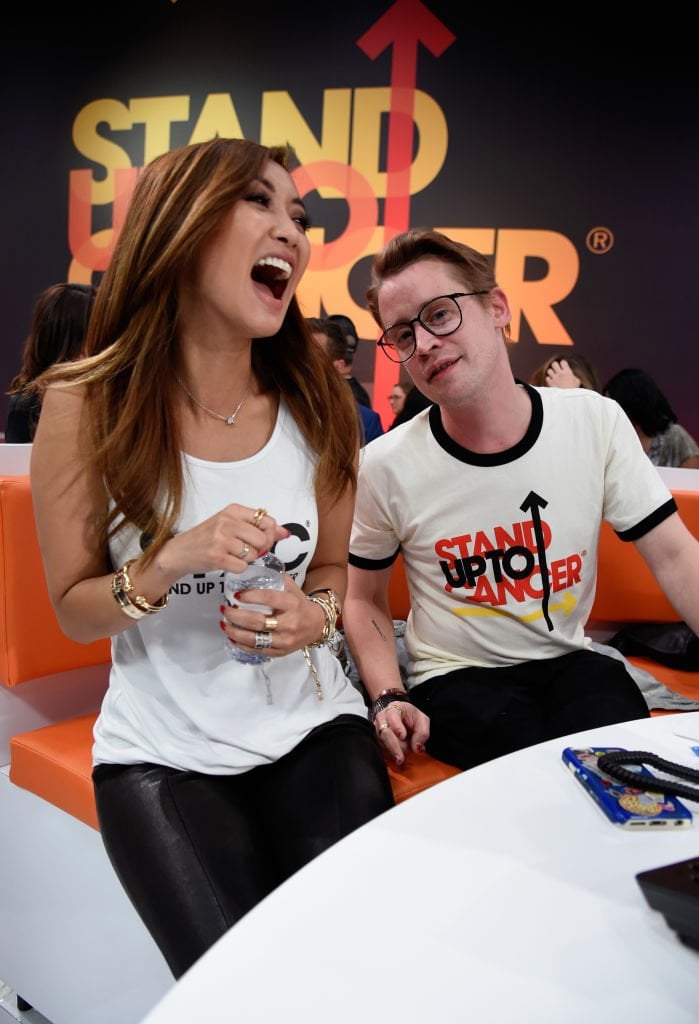 Brenda Song and Macaulay Culkin met on the set of the movie Changeland in 2017.

"Child actors, we don't even get to talk about it, you just look each other in the eye and you nod and we know," Song, who starred in Disney Channel's Suite Life of Zack and Cody, told Entertainment Tonight of working with Culkin in 2019.

While the two have kept things pretty private, we can confirm that the pair share one child together. 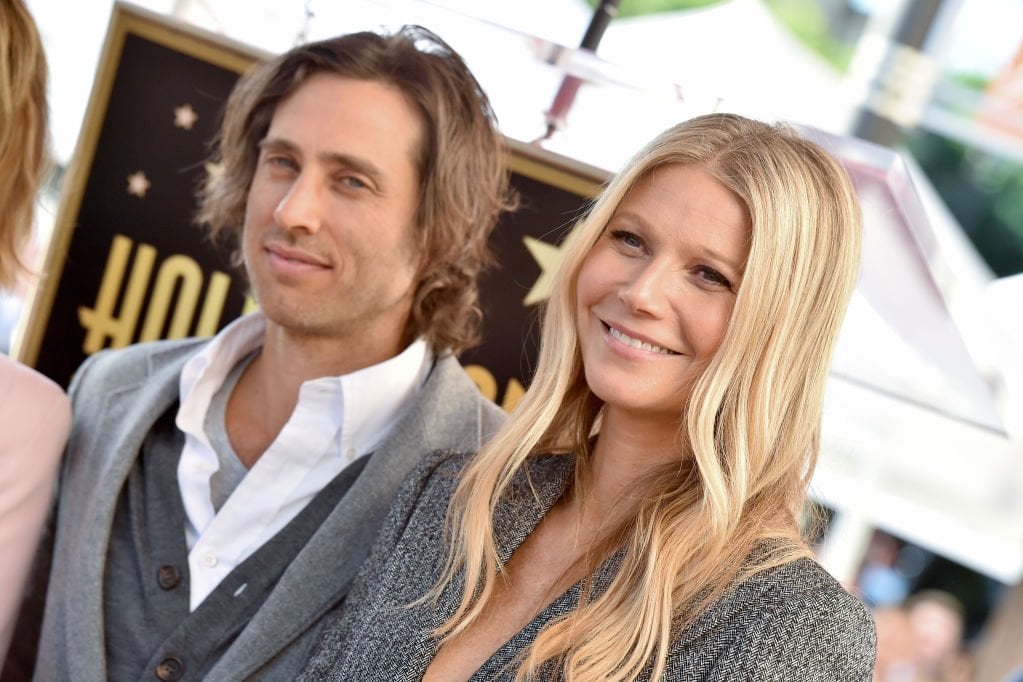 Gwenyth Paltrow and Brad Falchuk met on the set of Glee in 2014, where Paltrow was guest-starring, and Falchuck was a co-creator of the series.

On-screen Paltrow's character Holly Holiday had a relationship with Will Schuster but off, she and Falchuck's relationship turned romantic.

A year later the pair were spotted together for the first time, and by 2019, they were married and are still togetherto this day.

Feature Image: Getty / 10 Things I Hate About You.