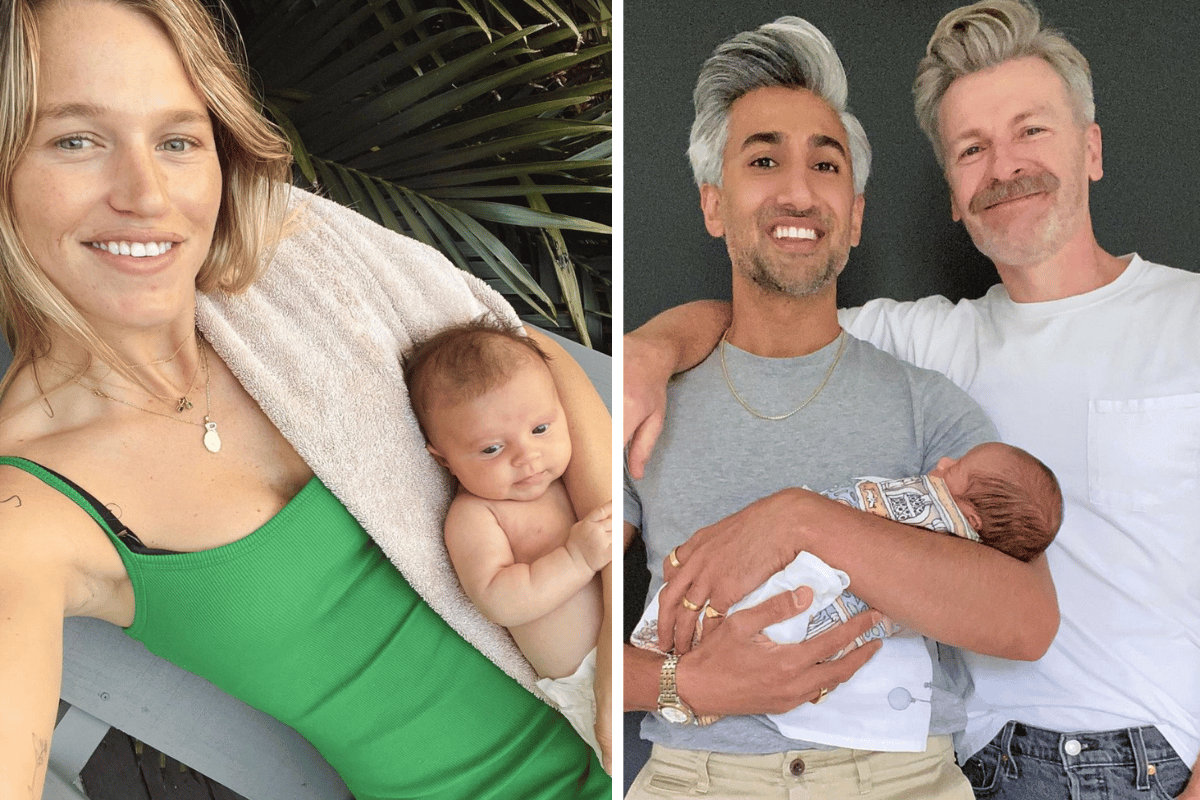 We love a fabulous celeb pregnancy reveal and birth announcement, and luckily for us, 2021 has been full of little baby surprises.

From the likes of Scarlett Johansson and Tan France, to more local figures such as Laura Byrne and Fiona Falkiner, it appears the reports of a pandemic baby boom may have come true.

Here, we unpack some of the wonderful baby arrivals that happened in celeb homes this year.

It's been over a year since Aussie snowboard champion Alex 'Chumpy' Pullin died in a freak diving accident. The 32-year-old Winter Olympian was pulled from the water after he was found unresponsive while spearfishing on the Gold Coast last July.

Now, his girlfriend, Ellidy Pullin, has welcomed their child together, who was conceived through IVF after his death.

Back in June, Ellidy announced she was pregnant, saying: "Your Dad and I have been dreaming of you for years little one".

She continued: "When my love had his accident, we all held onto hope that I’d be pregnant that month. We’d been trying for a baby. IVF was on our cards but it wasn’t something I ever imagined I’d be tackling on my own. Bittersweet like none other, I’ve never been more certain or excited about anything in my entire life."

Em Rata has spoken about the wish for gender stereotypes to not constrict her child, saying to Vogue: "I want to be a parent who allows my child to show themself to me.

"And yet I realise that while I may hope my child can determine their own place in the world, they will, no matter what, be faced with the undeniable constraints and constructions of gender before they can speak or, hell, even be born." 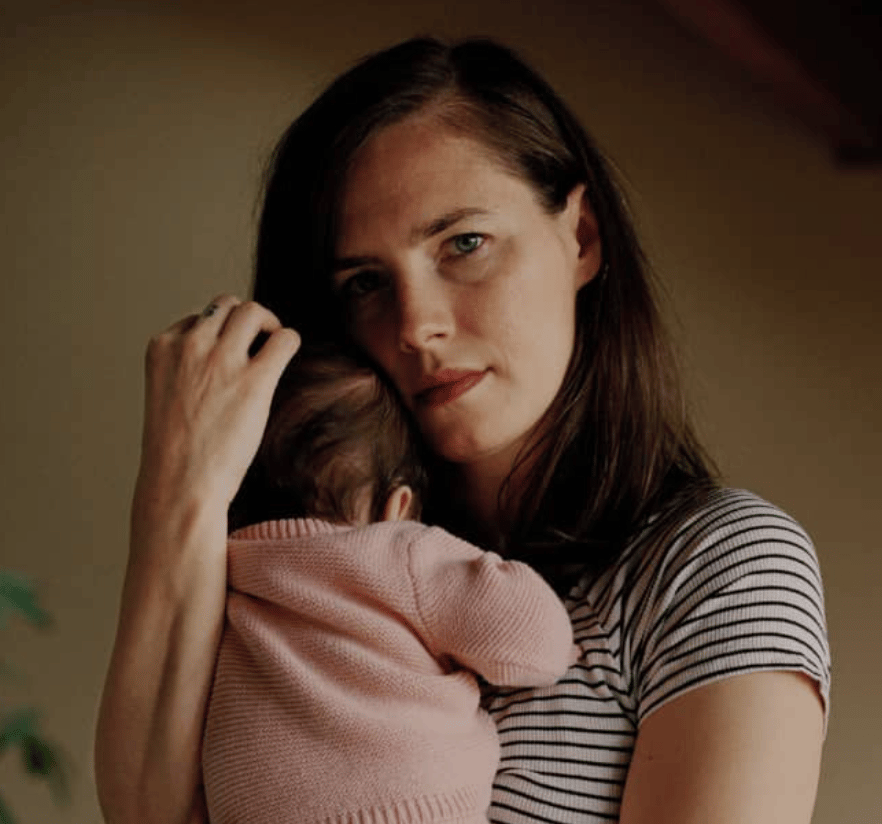 Image: Instagram/ @amandaknox  Amanda Knox's name will forever be associated with the murder of British student Meredith Kercher, who was found stabbed to death in her bedroom in Perugia, Italy in 2007. Exonerated from the crime, Amanda Knox has focused on activism work, aiming to prevent wrongful convictions.

This year, she welcomed a baby with her husband.

"Since my exoneration, I've struggled to reclaim my identity and protect the people I love from being exploited as tabloid content. It's not easy. I know that I cannot 100 per cent protect my daughter from the kind of treatment I've suffered, but I'm doing the best I can. Which is why this will be the only picture of her I will ever share on social media," Knox wrote.

"I'm so grateful to everyone who has wished us well on our journey to parenthood. Thank you for believing in us."

Speaking about her pregnancy experience with Mamamia, Falkiner said: "Pregnancy was a real wide ride and I think because of the IVF, I couldn’t really allow myself to feel it was real until I was holding Hunter in my arms.

"Looking back now, it all went by so quickly and I wish I had spent more time connecting. Hayley used to sing to my bump each night and now he is really soothed by her voice, which is beautiful."

Comedian John Mulaney and actress Olivia Munn were first linked in May 2021, three days after his separation was confirmed.

Munn has not publicly acknowledged their relationship, but Mulaney said they were "very happy" and that Munn had helped him in his sobriety.

"I got into this relationship that's been really beautiful and with someone incredible who has dealt with the non-coked-up version of me. That's been very incredible, and she kind of held my hand through that hell."

It is unsure however whether the couple are still together, with reports suggesting they have split. In November, they welcomed a baby boy.

"Meet Malcolm Hiệp Mulaney. He has his whole life ahead of him. I'm very in love with him and his whole deal. Happy Holidays," Mulaney wrote on his Instagram.

In August, fashion designer and Queer Eye co-host Tan France announced he and his husband had welcomed son, Ismail France, in July.

"He came 7 weeks early, so he’s been in the NICU for the past three weeks. But, today, we finally got to bring him home. We love him so, so much. Like, fully obsessed," the television personality wrote on his Instagram at the time.

"Our surrogate is doing so great post-labour and we couldn't be more grateful for the greatest gift in our lives."

The couple announced the news in February, Laura captioning her post: "You are perfection. You are dynamite. We love you and your 95 percentile head endlessly."

Listen to Me After You: Laura Byrne's very busy year. Post continues below.

Prior to her pregnancy with Lola, Laura had experienced the heartbreak of miscarriage.

"Pregnancy after miscarriage is such a unique experience. I couldn't feel excited while pregnant with Lola because of the anxiety of having had such a recent pregnancy loss and also because I was in a lot of pain," Laura shared on a bonus episode of Me After You.

As for life currently, Laura also noted she and Matty J are interested in having another child, but "maybe in a couple of years from now".

She concluded: "Having kids is literally the best thing I ever did and I absolutely love being a mum."

Cardi B and Offset

The WAP and Bodak Yellow rapper welcomed her second child with husband Offset, a fellow rapper, in early September.

Cardi B and Offset are also parents to daughter Kulture. The couple have not yet revealed the name of their 3-month-old son.

"We are so overjoyed to finally meet our son," the couple said in a statement shared with PEOPLE at the time. "He is already loved so much by family and friends and we can't wait to introduce him to his other siblings."

Aussie actress Teresa Palmer and her husband Mark Webber welcomed another child to their brood, Prairie Moon, born in August this year.

The couple's additional children include Bodhi Rain, Forest Sage and Poet Lake, as well as Mark's child Isaac from a previous relationship.

"No words can describe what it means to me to be given the gift of motherhood," she wrote on Instagram.

Bennett captioned a recent Instagram post saying Usain Bolt was "the rock of this family and the greatest daddy to our little ones. We love you [in our] world without end!"

Princess Beatrice and her husband announced the arrival of their daughter in September. They named her Sienna Elizabeth Mapelli Mozzi.

The Palace released a statement saying, "Her Royal Highness and her child are both doing well, and the couple are looking forward to introducing their daughter to her big brother Christopher Woolf," who is Edoardo's son from a previous relationship.

Recently, Gillies has also shared her experience of IVF and egg retrieval with her audience in a bid to make other parents feel less alone.

“One of the biggest reasons I decided to come back for this season [of RHOM] was because I felt that I needed to be open about IVF and my journey,” she said in a livestream Q&A hosted by comedian Joel Creasey.

Hollywood actress Scarlett Johansson and Saturday Night Live comedian Colin Jost announced the arrival of their son, only days after Jost confirmed her pregnancy in August.

"Ok ok we had a baby. His name is Cosmo. We love him very much. Privacy would be greatly appreciated," Jost wrote in his Instagram, adding the hashtags #wegotawaywithitforalongtime and #we'regoingtodisneyworld.