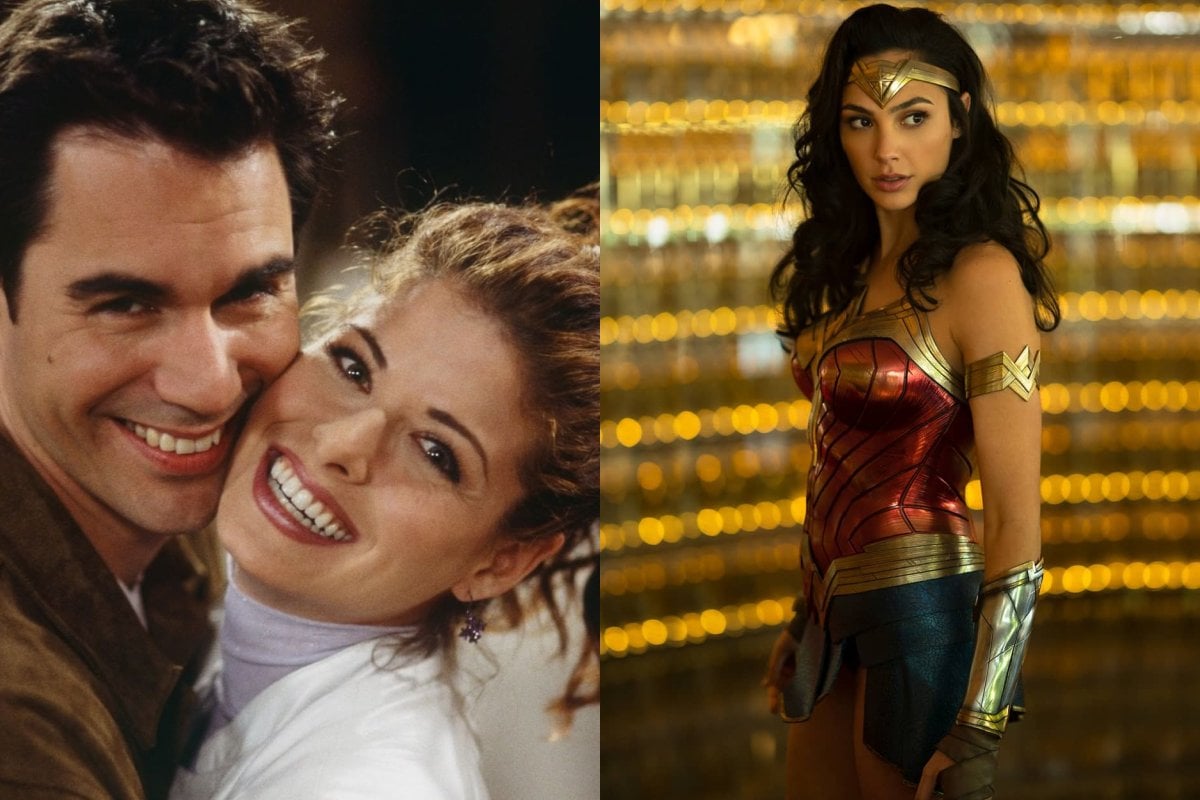 Ever wondered what happens when an actress gets pregnant smack bang in the middle of filming a movie or tv show? Like, what if the filmmakers can't write it into the storyline? And what if they can't kill the character off or send them on a 'holiday' because they're playing a leading role? What happens then?

Well, they get creative! More often than not, the filmmakers are so good at it you barely even notice. But sometimes, there are sneaky giveaways - like characters wearing progressively more oversized clothing. Or suspiciously holding things in front of their bellies.

Watch: Speaking of celebrity pregnancies, check out how Emily Ratajkowski announced her pregnancy. Post continues below.

Did you know Courtney Cox was pregnant in Friends? Or that Gal Gadot was expecting during the filming of Wonder Woman? Or that Sarah Jessica Parker was having her first child in Sex and the City?

We've pulled together 14 celebrities who filmed iconic roles while rocking a bump.

Sarah Jessica Parker filmed season five of Sex and the City while pregnant with her first child, and honestly the entire crew deserves a gold star cause we had no idea. The costume department got creative with her clothes, dressing her character in lots of flowy dresses, while sneaky camera angles diverted the attention away from her bump. The season was also cut a little shorter than the rest (it went for eight episodes in total) so Parker could go on maternity leave. 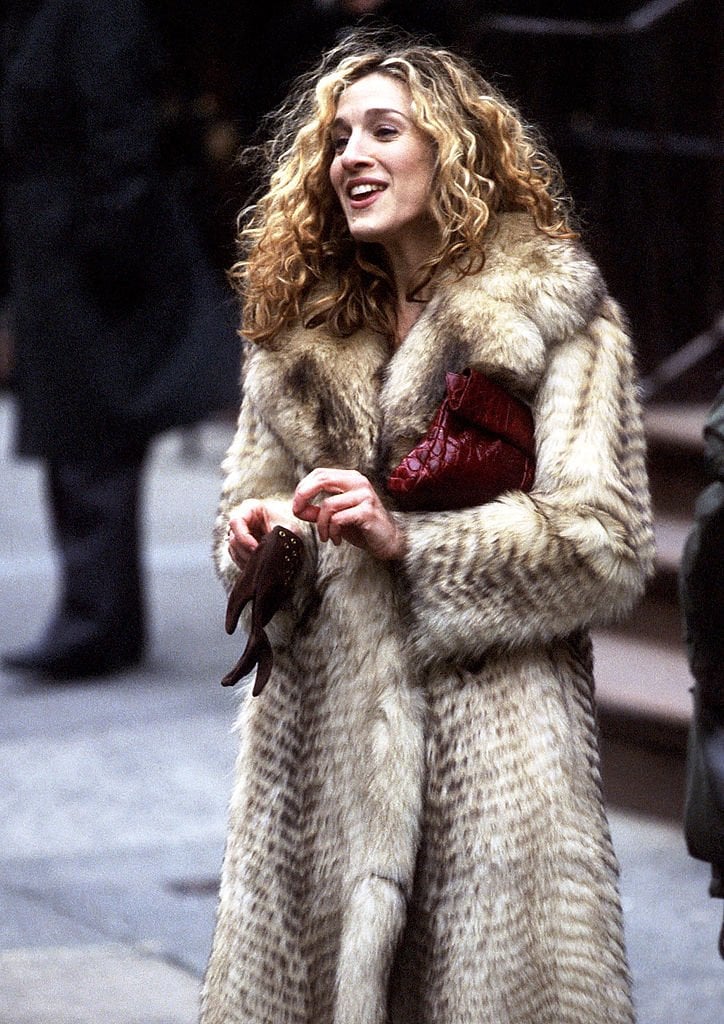 If you're anything like us, Friends is just one of those comfy series' that you can watch again and again. But while you might be able to recall what happened in ALL of the episodes, ever, did you know that during the filming of the show, Monica Geller, played by Courteney Cox, was pregnant?

Listen to Mamamia's Get Me Pregnant podcast, where we talk about putting your eggs on ice. Post continues below.

While the writers would've included her pregnancy in the story line, the entire season revolved around Chandler and Monica's inability to conceive a child... so they kinda couldn't. Instead, the show decided to camouflage the bump with coats, groceries and laundry baskets. Nailed it. 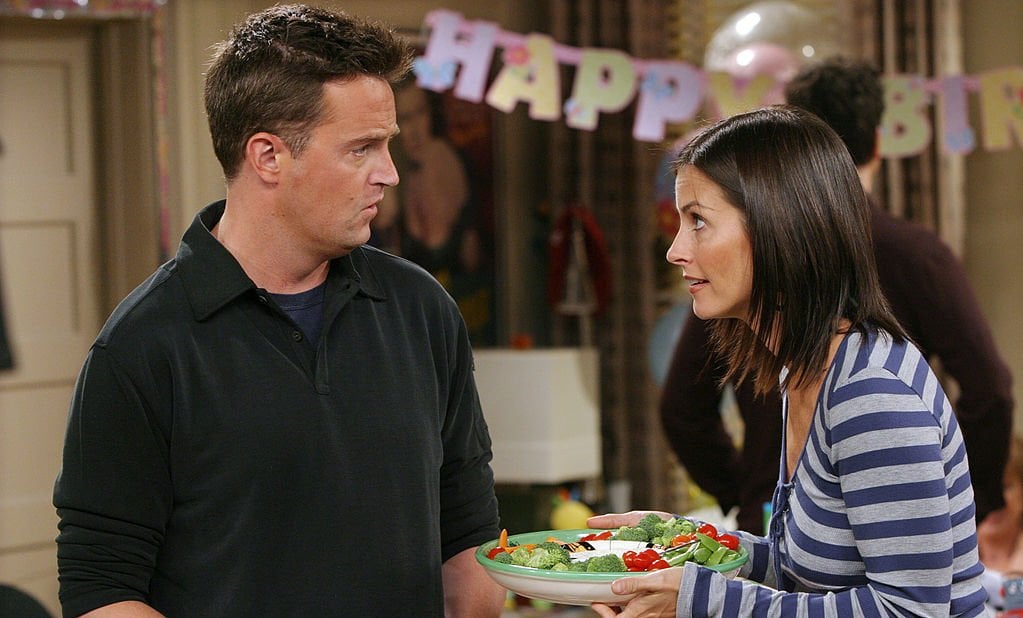 Debra Messing got pregnant in season six of Will & Grace, but her character didn't. While most other shows got crafty when they couldn't tweak the script, tbh the show didn't really do a whole lot to try to hide it.

Apart from a few tea towels and some large tables here and there, there wasn't a whole load of effort put in to trying to hide Messing's baby bump. She went on maternity leave in the eighth month of her pregnancy, and was written out of the season's final four episodes. 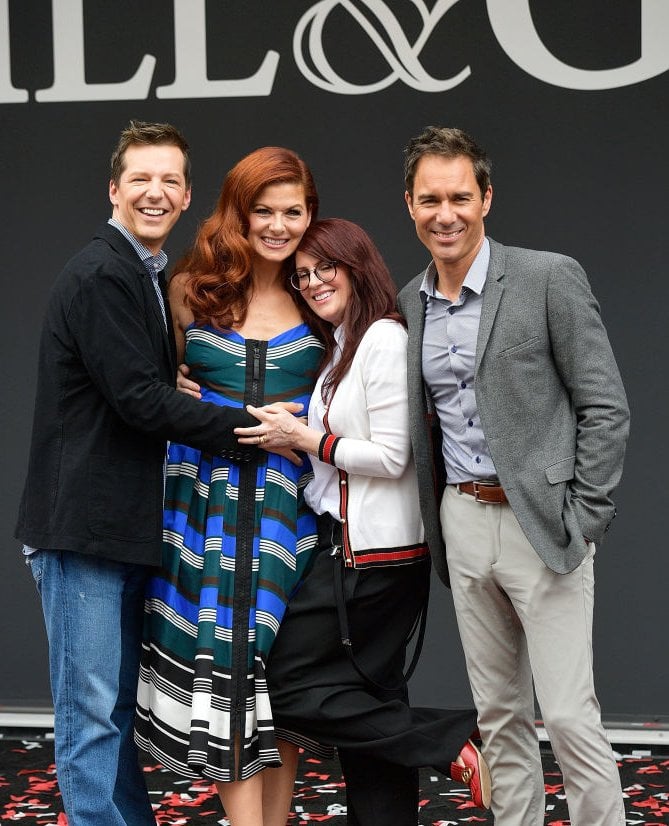 Playing a superhero would be hard enough, but imagine trying to do it when you're five months pregnant! In case you don't know, Gal Gadot is known for doing all her own stunts (especially in the Fast & Furious franchise), so she wasn't about to do things differently when it came to her role as Diana Prince in Wonder Woman.

During the final editing and reshoots, Gadot eventually had to wear a green cloth over her bump that would be removed during final editing. So sneaky.

Julia Louis-Dreyfus wasn't just pregnant once, but twice during the long-running comedy Seinfeld. But thanks to her character Elaine's off-beat fashion styles, the show was able to conceal her baby bumps along with some handy camera work.

She told Vogue in an interview in 2019: "All this oversized clothing was very helpful to me as a pregnant person, both getting more and more pregnant and then becoming less and less pregnant after giving birth."

Remember when January Jones donned a fat suit in Mad Men? Can you guess why? When Jones got pregnant, rather than writing it into the storyline the producers got ~extra~ creative with a subplot revolving around Betty gaining weight.

In an interview with Jimmy Fallon she said, "It was very difficult getting bigger and having to change the fat suit and the prosthetics. I had to arrive at work at 3 a.m. for six or seven hours of prosthetics." Sheesh!

To hide star Ellen Pompeo’s pregnancy in the beginning of season six of Grey’s Anatomy, you'll notice throughout the show she was mostly shot from the back, neck up, or sitting down. (Anyone else going to use this as an excuse to watch it all over again? Anyone?).

When it was time for her maternity leave, producers had her character, Meredith Grey, donate part of her liver to her father. This allowed the star to take time off the show as Meredith went home to 'recuperate'.

Kerry Washington was pregnant with her first child when she filmed season three of Scandal. Playing the badass character Olivia Pope, the show tried every trick in the book to hide her growing bump.

From clever camera angles to outwear (there were a lot of structured coats going on) and the classic prop-in-front-of-the-bump trick, most people never even noticed she was pregnant.

ScarJo was pregnant while playing the Black Widow during the filming of the Avengers movie. HOW? We hear you ask, as you think of that slinky black suit she wore throughout the film.

The producers used CGI to remove the baby bump from most of her scenes. Along with visual effects they made it work with three Black Widow stunt doubles, close-ups, concealing costumes and angles. Pretty nifty.

Alyson Hannigan - How I Met Your Mother

You might not realise this, but during the fourth season of How I Met Your Mother, Alyson Hannigan (who played Lily Aldrin) was pregnant for most of it. However, the show was shot during the winter, so coats, scarves and jackets worked a treat for covering up her baby bump.

However, in one particular episode, the writers decided to embrace the baby bump, having Hannigan's character compete in a hot dog eating competition, allowing her to show off her bump in guise of a bloated stomach. So. Good.

Lisa Kudrow was another Friends star that fell pregnant during filming of season four, except unlike Courteney Cox, they wrote her pregnancy into the show.

If you're a Friends fan, you'll know that Phoebe Buffay's pregnancy was unusual as hell - she offered to be a surrogate for her brother's triplets.

Like Gadot, Blake Lively shot a whole heap of stunt-heavy scenes while carrying her second child during the filming of The Shallows. Lively plays a surfer who is fighting for her life after being attacked by a great white shark in the waters off a remote paradise. Not ideal.

"They didn't hire a stunt double till the last two weeks of shooting," the star told ET. "Every single day there wasn't a single scene that wasn't stunt-heavy."

Angelina fell pregnant with TWINS during the filming of her movie Changeling, where she plays the mother of a kidnapped child. She chose not to reveal her pregnancy until the premiere of the movie.

In an interview with Los Angeles Times she said, "I got pregnant right in the middle of it and I think partially because of it. I was so emotional about children, that something in me kicked into gear."

In other superhero pregnancies you probably didn't know about, Halle Berry was pregnant during the filming of X-Men: Days Of Future Past. Yep. When she had to wear that ridiculously skin-tight leather suit.

The Oscar-winning actress said in an interview on the Queen Latifah Show, that being three months pregnant was an absolute "battle against the clock", with all her scenes being pushed to the beginning of the production due to the zip-tight costume. "I was busting out the suit!" she said.

Which show do you think handled a surprise pregnancy the best? Share your comments with us in the comment section below.

Take our short survey to tell us how we can help and for a chance to win $50.

Reply
Upvote
On The Nanny when Lauren Lane who played CC got pregnant, they just made jokes about it. For one scene, she was even talking about watching Seinfeld, and how it was so obvious that JLD was pregnant because they kept hiding her behind these huge props - then she leaves the scene randomly carrying a huge pot plant. I love that they didn't even try to hide it!
News
General
Opinion
True Crime
Politics
Sport
Explainer
Entertainment
Celebrity
Reality TV
Movies
TV
Books
Rogue
Royal
Lifestyle
Beauty
Fashion
Weddings
Home
Wellness
Health
Fitness
Travel
Food
Parents
Before The Bump
Pregnancy
Baby
Kids
Teens
School
Parent Opinion
Work & Money
Money
Finance
Career
Lady Startup
Relationships
Sex
Dating
Separation
Friendship
Family
Real Life
Couples