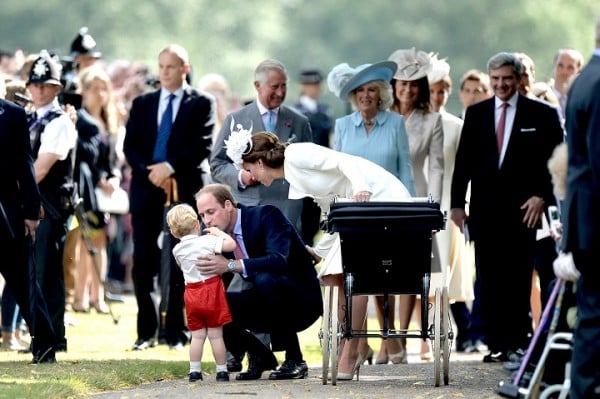 Today, I signed up to the Carole Middleton Fan Club. I moved from ‘bloody-Carole-Middleton-pushy-mum and I mean seriously those-skinny-jeans and I bet her-breath-was-a-bit-rank-at-the-royal-wedding-because-of-the-Atkins-diet and …’ to ‘Carole Middleton: love her. Nope. Won’t hear a word against’.

First, there were the images of gorgeous George, all toddly and chubby knee-ed at his sister Charlotte’s christening – and Carole in the background, craning her neck and smiling an indulgent, grandmothery smile at her grandson.

Then this weekend - and this is the clincher -  she was snapped at the Australia vs England rugby match, pouring a Shaz and Trace-like baby bottle of cheeky sav blanc into what looks very much like a plastic wine glass.

... then ripping into a packet of chips (she's clearly off the Atkins). Then throwing back another glass.

Which, presumably, was enough to loosen things up to the point where she yelled and despaired and generally wore her heart on her puffer jacket sleeve.

It was easy to believe Carole was a pushy, wannabe posh mum hellbent on snaring a posh prince for her eldest daughter because, well, that's what all those prigged-up toffs put about.

Take this from the Daily Mail in 2007, just after Kate and Prince William split:

... "Carole is seething at her daughter being humiliated. All her plans have gone up in smoke and she really wasn't expecting it. She has invested years in this.

"There's no doubt that Kate loved William but it hasn't helped that, in the background, Carole has been encouraging her forward every step of the way."

Indeed, it is a trait that has earned Carole the moniker of Meddling Middleton among some of William's circle and "raised question marks" over her at the highest levels of that circle.

"Put bluntly, the Queen seems to like Kate's father, Michael, but the courtiers sense that there are big question marks over the mother," according to one Royal source.

"She is pushy, rather twee and incredibly middle-class. She uses words such as "Pleased to meet you", "toilet" and "pardon".

"The irony is that Carole has been so busy pushing her daughter forward and doing her best to groom her for Royalty that she's rather missed the point that she might not fit in herself."

I'm kind of delighted those 'Royal sources' might now have to kow-tow to "incredibly middle-class" Caz. That she's perched up near Harry at the footy and that her riff on a scarf looks better than the Queen's or Princess Anne's.

And that for all their bollocks, pin-in-the-mouth disapproval, she's stuck it out.

Here's to you, Carole. You're definitely someone I'd clink a plastic cup with.

*(Okay, she's not really a royal. But her daughter is. Near enough for me).