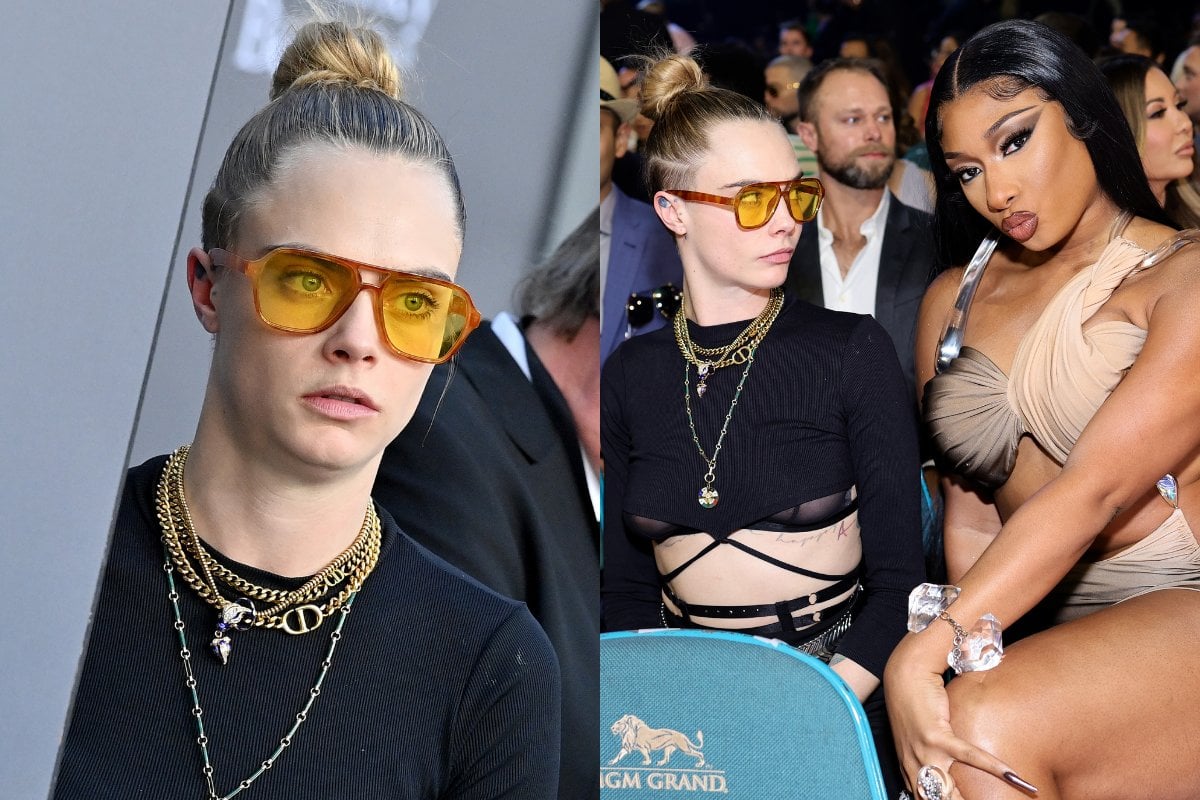 Cara Delevingne has everyone talking.

On Sunday night US time, the 29-year-old supermodel attended the Billboard Music Awards in Las Vegas.

While no one's quite sure why she was there, it's suggested the model-turned-actor was Megan Thee Stallion's plus one. However, that doesn't explain her strange behaviour towards the rapper during the night.

Before the show even started, Delevingne stole the show.

While the supermodel didn't walk the red carpet, she was spotted making faces, talking and watching from a distance, as Megan Thee Stallion posed for photographs.

After a few minutes, Delevingne hopped onto the carpet, grabbing the train on the 27-year-old rapper’s dress and throwing it up in the air, seemingly trying to make it float in photos.

She did this numerous times.

Inside the show, Delevingne sat front and centre next to the rapper and made her presence known.

In a video recorded by a fan, Megan Thee Stallion is seen having a conversation with fellow female artist Doja Cat. The two - who were both up for big awards that night - were talking when Cara popped her head over and chimed in.

"Oh my god. Hi, Cara Delevingne," Doja Cat said, seemingly having no clue she was there prior to joining in on their conversation.

In the now-viral clip, both Megan and Doja seemed to laugh off the encounter and appeared pretty unfazed by the surprise interruption.

Another time, she even got on the floor to take a picture of Doja Cat, Fat Joe and DJ Khaled.

Cara Delevingne on the floor taking photos of Doja Cat, Fat Joe and DJ Khaled at the #BBMAs. pic.twitter.com/8MtwBJi0W7

She stuck her tongue out near Megan's face and once again, fiddled with the train of her dress, as she stood up to receive her award.

why every time i see cara delevingne her tongue out and she in megan’s face 😭😭😭pic.twitter.com/JdKdflV1Lv

Then after the show, Megan shared various photos on her Instagram story to celebrate the night and her win. And one photo in particular had people talking.

In a picture, which Megan reposted to her story from a fan account, she and Doja are smiling and posing together from their seats.

Quickly fans noticed that Delevingne - who was sitting next to the rapper in the original photo - had been completely edited out of the shot.

Though Megan didn't comment on it or make the photo herself, fans started questioning whether the repost was intentional and a subtle nod to the online commentary surrounding Delevingne's behaviour.

That being said, others were quick to point out that in the unedited picture the supermodel looked blurry, prompting the theory that the edit was made because she wasn't camera ready.

Either way, it got people talking even more about the supermodel - Megan's biggest hype woman - and the event.

Neither women have commented on the situation.

Neither women have commented on the situation.