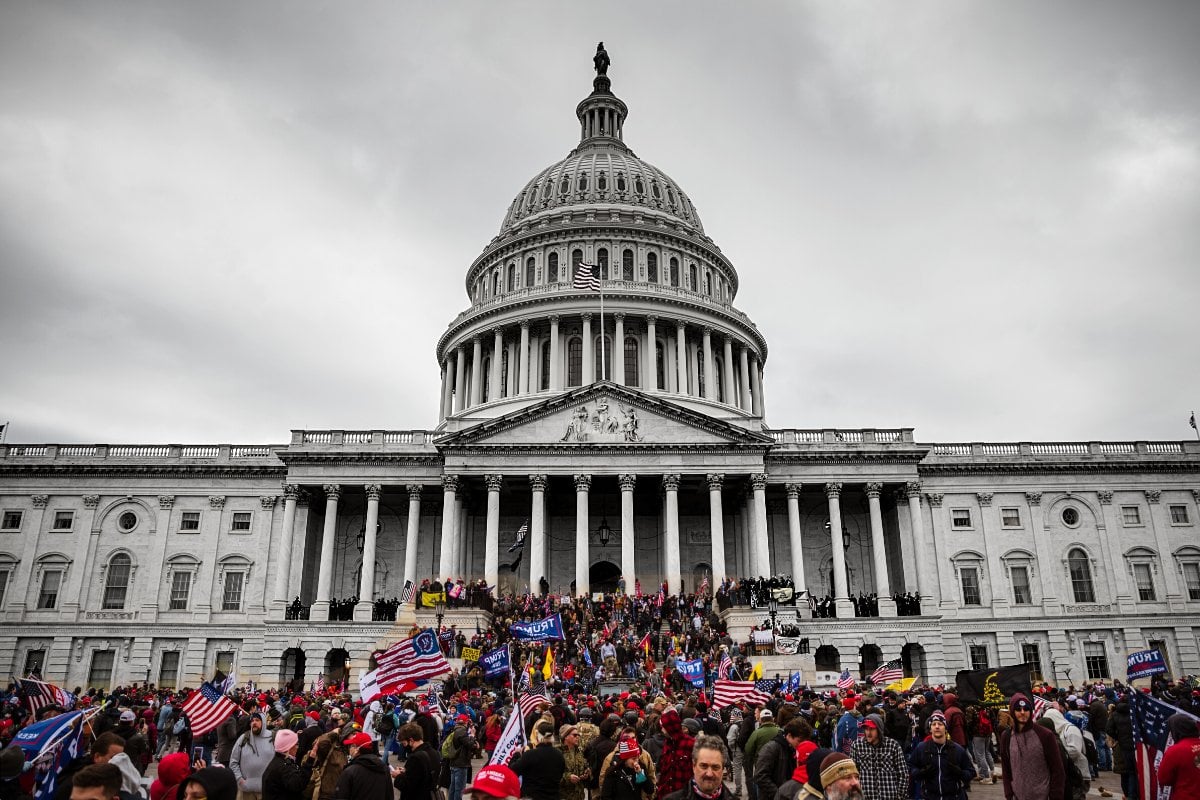 On January 6, 2021, a pro-Trump mob that surpassed into the thousands stormed the U.S. Capitol building, all in bid to halt Congress from formally confirming Democrat Joe Biden as the next president.

They battled with armed police brigades, and the protestors who broke into the building sent lawmakers and journalists into lockdown.

When inside, the trespassers looted items from offices, waved confederate and U.S. flags and insisted the election had been stolen from the former president Donald Trump.

Five people died as a result of the attack.

A large number of the rioters came directly from the 'Save America Rally' that had occurred just hours before at a park near the White House,

Trump told the crowds: "Our country has had enough. We will not take it anymore, and that’s what this is all about. To use a favorite term that all of you people really came up with, we will stop the steal."

Watch: CNN's Van Jones urges his Republican friends to ask themselves an important question about the Capitol siege. Post continues after video.

It's been a year since the U.S. Capitol riots, and 700 people in total have been arrested over the incident since then.

Trump was impeached by the US House of Representatives for "inciting" the riot, but as of last month he continues to maintain he had little to do with the insurrection - which he claims was a "completely unarmed protest of the rigged election".

Trump may have dodged legal repercussions for the riot so far, but his supporters have not.

Here are the legal implications some of the most infamous faces of the U.S. Capitol riot are dealing with.

Jacob Chansley, AKA the ‘QAnon Shaman’. 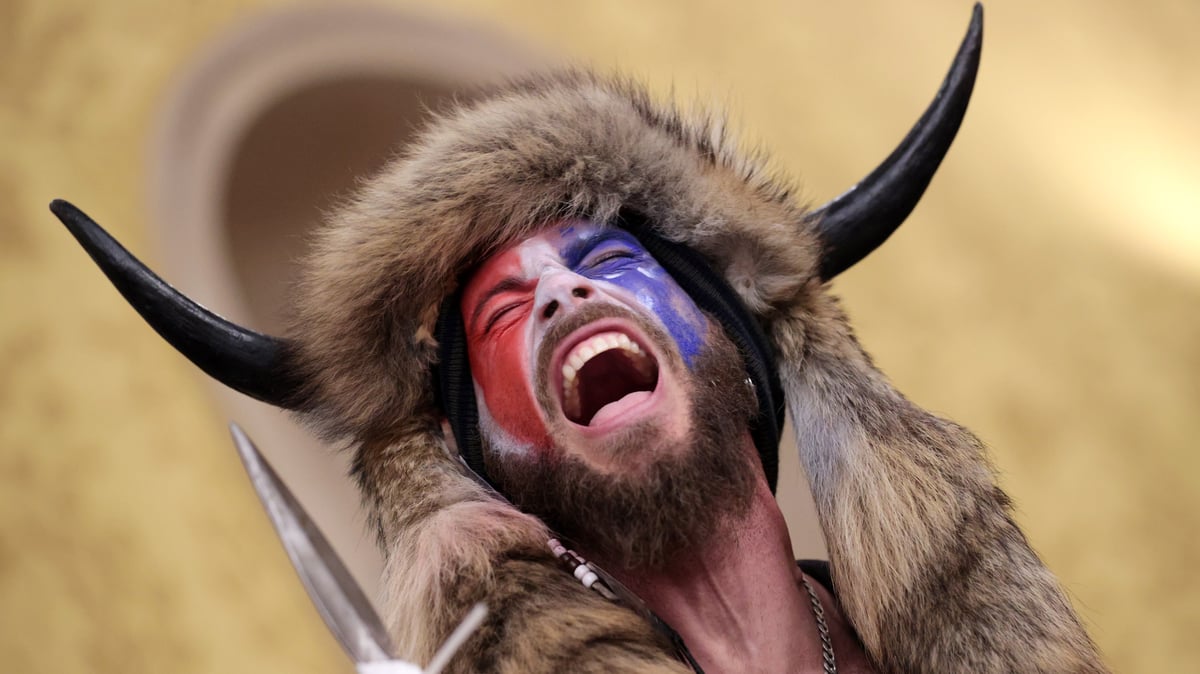 Jacob Chansley - who has dubbed himself the 'QAnon Shaman' - rose to internet infamy after images of him shouting while inside the Capitol building went viral. He quickly became one of the main faces of the U.S Capitol Hill attack.

He was arrested on January 9, and according to Al Jazeera, he was initially charged with a six-count indictment.

Chansley was accused of scaling the Senate dais, and footage taken by a journalist caught him sitting in the chair that Vice President Mike Pence had occupied the hour prior.

He eventually took a deal and pleaded guilty to obstruction of an official proceeding. He was sentenced to 41 months in prison.

The judge who gave his sentencing said Chansley had "done a lot" to show he was "on the right track".

The court heard that Chansley had been diagnosed with schizophrenia, bipolar disorder, depression and anxiety.

"The hardest part of this is that I know I am to blame," Chansley said in a statement, and later wrote: "I am sorry for having aroused fear in the hearts of others. That was wrong. Period."

His defence lawyer, Konder Watkins, accused Trump of inciting the riot "by and through his actions and words".

"Mr. Chansley is not a political prisoner. He does not seek to be labeled (sic) such. Rather, this case is about a frail and vulnerable human," the lawyer wrote.

In his statement, he also voiced his disappointment in Trump for not pardoning him and other suspects who were part of the January 6 riots, before leaving office.

Court has set a May 2022 trial in the high-profile US Capitol case of Kevin Seefried of Delaware, who is accused of carrying Confederate flag thru Capitol pic.twitter.com/FmSguOVlj2

Kevin Seefried quickly became one of the most recognisable faces from the U.S. Capitol riots when images of him waving a Confederate flag from inside of the building went viral.

The flag has become a symbol of racism and hatred for many in the United States, however its proudest defenders maintain it represents southern heritage and history.

Seefried was taken into custody on January 14, 2021, with his son Hunter.

The father has been charged with five counts that are related to unlawfully entering the Capitol, including obstructing, influencing and impeding an official proceeding.

His son, Hunter was charged with eight counts, including engaging "in an act of physical violence within the United States Capitol Grounds and any of the Capitol Buildings," according to official records.

Seefried has been free on bond and pleaded not guilty in May. According to Reuters, his trial date is set for June 2022.

Richard Barnett of Gravette, Arkansas has been arrested for his seditious behavior at the US Capitol.

Now he can cool his heels in jail. pic.twitter.com/402ITsXsIz

One of the most viral photos from the riot shows a smug Richard Bennett sitting in Nancy Pelosi's (the speaker of the US House of Representatives, and the third in line of succession for the presidency) office at Capitol Hill.

Barnett also goes by the name 'Bigo' and said outside the Capitol in a viral video that he had "put a quarter on her desk even though she ain’t f**king worth it. And I left her a note on her desk that says ‘Nancy, Bigo was here, you b***h."

Barnett also held up an envelope that he claimed he took from Pelosi’s office.

He was arrested two days after the riot, and spent over three months in pre-trial detention.

He was accused of bringing a stun gun into the capitol and was therefore posed as a threat to the community. He was later released in April.

Barnett faces seven federal charges, including entering and remaining in a restricted building or grounds with a deadly or dangerous weapon. The maximum sentence for the charge is 10 years in prison, and a date has not yet been set for his trial.

He has pleaded not guilty and since his release, and Barnett has spoken openly about what he believes is unfair imprisonment.

Federal judge reverses bail for Capitol rioter Richard Barnett. The stun gun-carrying insurrectionist photographed with his boot up on Nancy Pelosi’s desk has been ordered to remain in jail and brought immediately to DC, so his case can proceed. pic.twitter.com/0BVS4AnsSb

"As far as apologies or regret… no comment," he told a local Arkansas news outlet in November, according to Al Jazeera. "You can pretty much guess how I feel, but I can’t comment on it."

Robert Packer was among the hoard of rioters that stormed the Capitol building, and stood out particularly for his black hoodie with a skull logo that is associated with the Nazi SS.

It also read the words "Camp Auschwitz" and "Work brings freedom". The phrase is translated from the German quote which stood over the gates of death camps: "Arbeit macht frei".

Better look at the guy with the 'Camp Auschwitz' hoodie from yesterday. Not only does it feature the SS 'totenkopf', but an English translation of 'Arbeit Macht Frei'. No wiggle room, no joking here. This is who these people are. (via @MrTAchilles) pic.twitter.com/i6zjuIAQbx

Packer has pleaded not guilty to charges of entering a restricted building, and violent entry and disorderly conduct.

Meet Doug Jensen. Doug was at the insurrection on January 6th. More importantly, Doug is a f***ing moron standing next to the Capitol building.

Doug Jensen was seen on camera footage chasing Officer Eugene Goodman up a flight of stairs during the riots. He donned a QAnon-branded shirt.

Jensen is believed to have led the chase and has pleaded not guilty to any charges, that of which include assaulting officers and obstructing an official proceeding, as reported by ABC News.

He is currently awaiting trial.

Eugene Goodman has been awarded a Congressional Gold Medal for drawing Jensen and other protestors away from the Senate chamber.

In June 2021, Jensen asked to be released while he awaits his trial, after his lawyer claimed he was "languishing" in jail.

Jensen said he’s "a victim of numerous conspiracy theories that were being fed to him over the internet by a number of very clever people, who were uniquely equipped with slight, if any, moral or social consciousness."

His motion... is quite something. Criticizing Trump, explaining QAnon & calling himself victim

He was initially released from jail on the "most restrictive bail guidelines" but it was revoked after he was caught listening to Mike Lindell's cyber event. Lindell is a right-wing political activist and the CEO of U.S. brand My Pillow.

"Frankly, I think it’s probably a logical inference that there are no conditions that I can impose that will ensure Mr. Jensen does not pose a risk to the community," his Judge Timothy Kelly said at the time.

"I made Mr. Jensen’s conditions of release extraordinarily clear." 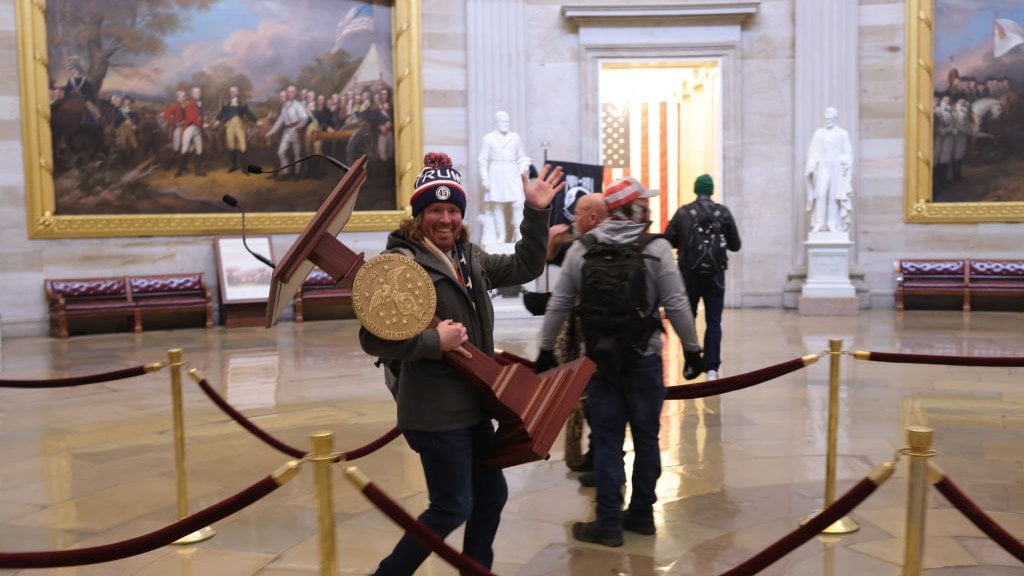 Adam Johnson's grinning face while carrying a lectern used by Nancy Pelosi, made him one of the main faces from the U.S. Capitol riot.

Johnson, who is based in Florida, did not take the lectern home with him. It was later found in another part of the Capitol building.

Johnson took a plea deal after he was charged with entering a restricted building, stealing government property and violent and disorderly conduct.

He pleaded guilty to only the first charge, but he is yet to be sentenced.