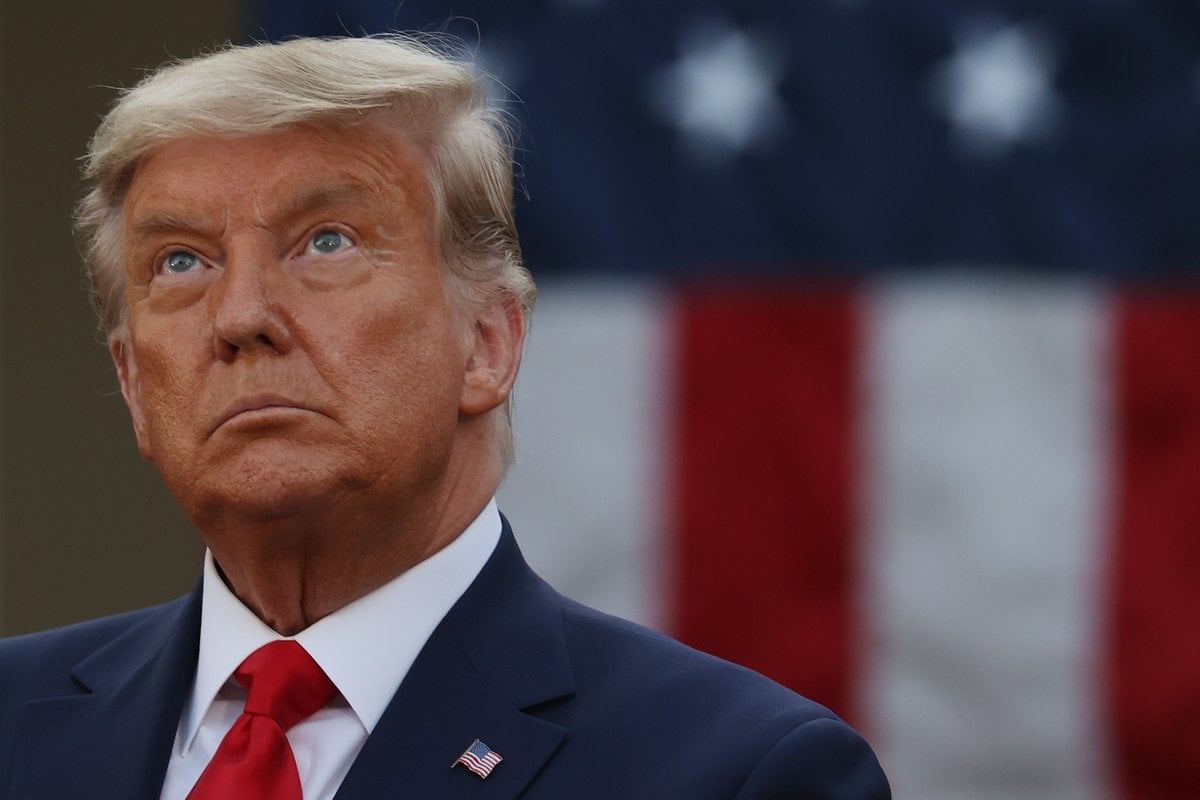 On Wednesday January 6, 2021, a mob of pro-Trump rioters stormed the U.S. Capitol building as Congress gathered to confirm Joe Biden as the 46th President of the United States.

After breaching barricades and security checkpoints, the protesters entered the building forcing lawmakers and journalists into lockdown. They were ordered to wear gas masks, and many made their escape via underground tunnels.

Five people died as a result of the mayhem, as the trespassers looted offices, waved Confederate flags and screamed that Donald Trump was the "real winner of the stolen election."

Watch: The double standard of the Capital Hill siege. Post continues after video.

The world watched on in horror as Trump's speech - given just hours before the violence erupted - was quickly accused of inciting the riot.

"We will never give up. We will never concede. It will never happen. You don’t concede when there’s theft involved. Our country has had enough. We will not take it anymore," he'd declared, before retreating to the White House to tweet.

But here are just seven things that've happened in the four days since the riot.

1. Trump has been permanently deleted from social media.

Twitter was the first to act, locking President Trump out of his account for 12 hours as the violence unfolded. Within a few days the social media giant decided to make the move permanent.

"After close review of recent Tweets from the @realDonaldTrump account and the context around them — specifically how they are being received and interpreted on and off Twitter — we have permanently suspended the account due to the risk of further incitement of violence," Twitter said in a statement.

Trump still managed to tweet for a short time — not from @realDonaldTrump, his suspended account, but through the official @POTUS account reserved for the current President of the United States. 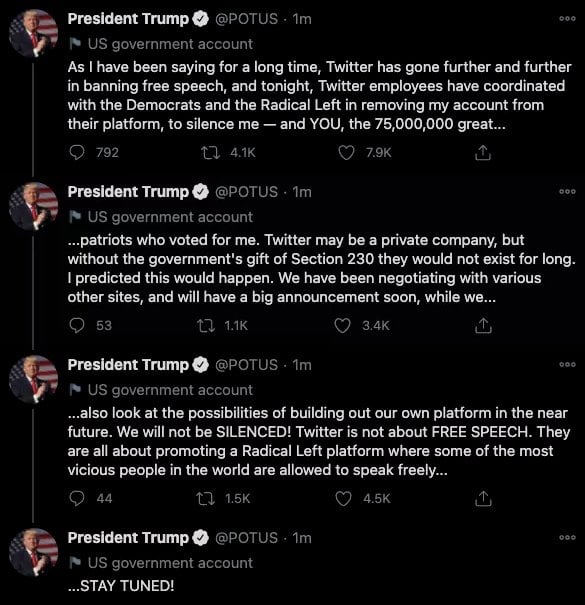 His message, before it was deleted, cryptically suggested that he will “have a big announcement soon” and that he was looking “at the possibilities of building out our own platform.”

“We believe the risks of allowing the President to continue to use our service during this period are simply too great,” Zuckerberg wrote. “Therefore, we are extending the block we have placed on his Facebook and Instagram accounts indefinitely and for at least the next two weeks until the peaceful transition of power is complete.”

Donald Trump's son hit back at the de-platforming of his father, writing "Free speech is dead & controlled by leftist overlords."

Free Speech Is Under Attack! Censorship is happening like NEVER before! Don’t let them silence us. Sign up at https://t.co/835Eak6Ghi to stay connected!
If I get thrown off my social platforms I’ll let you know my thoughts and where I end up. pic.twitter.com/bO7wbfWWVr

Snapchat and Twitch have also joined in suspending the president's accounts, while Reddit has closed a forum popular with Trump fans, saying it was inciting hate.

The U.S. attorney's office for D.C. has filed 18 cases in federal court and at least 40 others in the Superior Court in the days since the riot.

Cases in the Superior Court are mainly for things like gun crimes, unlawful entry and curfew violations, but among those facing federal charges are Richard Barnett, the Arkansas man shown sitting in House Speaker Nancy Pelosi's office with his boots on the desk. Barnett is charged with crimes including theft of public money, property or records.

From his feet on Nancy Pelosi's desk to an Arkansas jail. Here's a mug shot of Richard Barnett, who was arrested this morning and is now facing federal charges pic.twitter.com/rpSJ3BvyAm

Another man being tried in federal court, Lonnie Coffman of Falkville, Alabama, was arrested after authorities say they found guns and 11 Molotov cocktail explosive devices made out of Mason jars, golf tees and cloth rags in his pickup truck.

Prosecutors expect to hand out more charges, as they sift through photos from the riot and identify perpetrators.

No charges have been laid as of yet in relation to any of the five deaths that occurred as a result of the riot. U.S. Capitol Police Officer Brian Sicknick, 42, died after he was hit in the head with a fire extinguisher as rioters descended on the building. Ashli Babbitt, 35, was shot to death by Capitol Police and three other people died after medical emergencies. Benjamin Phillips, 50, suffered a stroke, Kevin Greeson, 55, died of an apparent heart attack, and it's been reported Rosanne Boyland, 34, was crushed to death.

US Army Secretary Ryan McCarthy has also confirmed at least 25 domestic terrorism cases have now been opened with "additional measures" to be taken on the day of Biden's inauguration.

3. Donald Trump is facing impeachment as Republicans turn on him.

House Speaker Nancy Pelosi says the House "will proceed" with bringing legislation to impeach President Donald Trump to the floor.

Ms Pelosi made the announcement in a letter late on Sunday to colleagues.

If the resolution doesn't pass by unanimous consent, and it most assuredly won't given likely Republican resistance, then the measure will be brought to the floor for a full vote on Tuesday.

The resolution calls on Vice President Mike Pence to respond within 24 hours.

"[W]e will proceed with bringing impeachment legislation to the Floor." pic.twitter.com/fF3IlLKWTH

"I think the president has disqualified himself from ever, certainly, serving in office again," Toomey said. "I don't think he is electable in any way."

Republican Sen. Pat Toomey says he thinks President Trump should resign: "I think at this point with just a few days left it's the best path forward" #CNNSOTU https://t.co/3LzY9t4nuO pic.twitter.com/XIjPVqUdK9

Another idea being considered was to have a separate vote that would prevent Trump from ever holding office again. That could potentially only need a simple majority vote of 51 senators, unlike impeachment, in which two-thirds of the 100-member Senate must support a conviction.

While many Republicans have criticised Trump, most feel that impeachment would be divisive in a time of unity.

The impeachment articles, if passed by the House, could then be transmitted to the Senate for a trial, with senators acting as jurors to acquit or convict Trump. If convicted, Trump would be removed from office and succeeded by the vice president. It would be the first time a US president had been impeached twice.

4. Trump has recognised a Biden victory for the first time.

A day after his supporters stormed the Capitol building, Trump released a video message effectively conceding that the Biden administration would take over on January 20.

He vowed to spend his final days in office working on a smooth transition of power, in a speech that was dramatically different in tone to his normal addresses.

"The demonstrators who infiltrated the Capitol have defiled the seat of American democracy.

"To those who engaged in the acts of violence and destruction, you do not represent our country. And to those who broke the law: you will pay," he said in the video.

His speech came just hours after Democratic House Speaker Nancy Pelosi called for Trump to be removed under the 25th amendment, and was seen by commentators as Trump's attempt at "damage control."

Top White House officials have handed in their resignations after the Capitol Hill riots, including first lady Melania Trump's chief of staff.

While Stephanie Grisham, who spent a year as White House press secretary before becoming chief of staff to the first lady, did not give a reason for her leaving, the ABC reports the violence was the last straw for her.

.⁦@WhiteHouse⁩ Deputy Press Secretary Sarah Matthews resigns from the Trump Administration in response to today’s events. I have always known her to be a good person who has the best interests of the nation at heart. pic.twitter.com/4ZMfmM2Zl3

Among others to hand in their notice was education secretary Betsy DeVos who called the violence that disrupted Congress "unconscionable."

“There is no mistaking the impact your rhetoric had on the situation, and it is the inflection point for me,” she wrote.

Special envoy to Northern Ireland and former White House chief of staff Mick Mulvaney announced that he "can't stay" after watching the president encourage the mob that overtook the Capitol complex.

6. Members of Congress might've been exposed to COVID-19.

On Sunday it was revealed that several lawmakers who went into lockdown during the riot did so with a person who has tested positive to coronavirus.

"On Wednesday January 6, many members of the House community were in protective isolation in room located in a large committee hearing space,” Brian Monahan, Congress's attending physician, said in an email to lawmakers, according to The Washington Post.

Public health officials have also warned that the Capitol Hill riots could turn out to be a super spreader event, with most of the demonstrators unmasked and in close proximity during the violence.

There has been widespread criticism about the glaring difference in how police treated Black Lives Matter protesters just a few months ago, when compared to their treatment of a predominantly white, pro-Trump crowd that assaulted the U.S. Capitol.

"There is no doubt in my mind that if those were Black Lives Matter protesters yesterday breaking into the Capitol Building, there would be dozens and dozens of people dead today," Mitch Morrell, former acting and deputy director of the CIA, told CBS News Thursday.

“They've killed us for less!” the NAACP tweeted.

On Thursday, President-elect Joe Biden noted the double standard, saying he had received a text message from his granddaughter, Finnegan, of a photo showing “military people in full military gear — scores of them lining the steps of the Lincoln Memorial” during a BLM protest last year.

“She said ‘Pop, this isn’t fair,’” the president-elect recounted.

“No one can tell me that if it had been a group of Black Lives Matter protesting yesterday ... they would have been treated very, very differently than a mob of thugs that stormed the Capitol,” Biden said.

“We all know that’s true. And it is unacceptable,” he added.