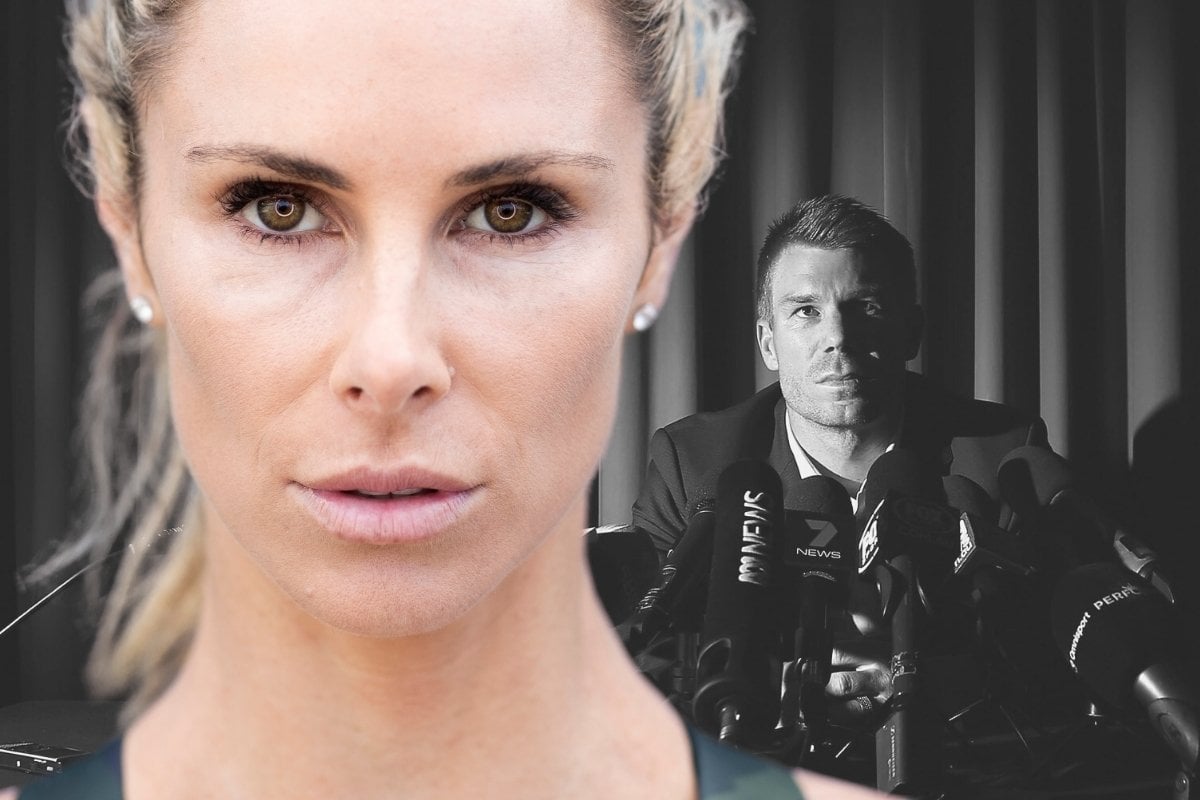 Warning: The following deals with pregnancy loss and suicidal ideation.

Candice Warner has hit rock bottom twice in her life.

She was Candice Falzon then, known best as a successful IronWoman until she was mercilessly slut shamed by the press and online commentators over a sexual encounter with rugby league star Sonny Bill Williams. A member of the public had filmed the pair without their knowledge, the media acquired the footage and committed the details of their drunken liaison to paper for the entire country to gape over.

Predictably, only one reputation was scarred.

Watch: Why Candice Warner stepped back into the spotlight for SAS Australia.

Reflecting on the fallout on Mamamia's No Filter podcast, Warner hunts for the silver linings. There was no social media, for one. But most importantly, though the enforced shame dragged her into a dark place, she found a way out.

"It got so bad that I remember pulling to the side of the road and [thinking], 'I just can't take anymore'... There was a part of me that wanted to end my life, to be brutally honest. I did not want to be here anymore. I did not want my family to suffer. I couldn't shame my family anymore.

"But I think it was that moment that needed to be had to wake me up and go, 'Okay, you can do something about your life and move forward in the direction that you want to go. Or you just continue down this path of— I don't know if it's feeling sorry for yourself, or just taking the blame and hiding from everyone, from life.

"So that was the first time I hit rock bottom. I got through that. So I knew I was quite resilient."

"I couldn't believe what I was seeing."

The events of the Australia versus South Africa test series are infamous.

There have been thousands of column inches, hours of television and radio commentary, books and documentaries dissecting it; from the tea-break altercation between David Warner and South Africa's Quinton de Kock, to the "Sandpapergate" ball-tampering scandal.

Candice Warner's perspective, though, isn't about sporting conduct or wounded national pride. It's about public shaming, two small children, and a spouse's succour in the face of a deep personal loss.

"I was just at the cricket watching my husband play, like any other time, with my kids there... We're in the crowd. And all of a sudden, he's walking off. And there was an exchange in between the change rooms where one of the South African players had said something to David about me [Warner has never revealed the comment, but previously described it as "vile and disgusting"].

"So from that, David retaliated. He didn't hit him, but there were words. David got fined for sticking up for me, which I don't have an issue with because he was defending his wife... Look, there are different ways to approach situations; maybe his approach wasn't the right way. But when you grow up in Maroubra [where Candice was raised] or Matraville [where David was raised], that's just how you deal with things — that's all we know."

The next match, South African fans got personal.

PHOTOS: While security was instructed to confiscate Sonny Bill Williams masks, these ones did get into St George's Park. #SAvAUS pic.twitter.com/D0jtTEJw5h

"I turned up to the game and, all of a sudden, there were people wearing [Sonny Bill Williams] masks, there was a songbook written about me that was handed around the crowd. I'm sitting there with my mum next to me, because she travels with us at times, and my two daughters. And I couldn't believe what I was seeing. People were tweeting me, photographing the songbooks, photographing the signs.

"It was humiliating. It was so hard. And also knowing that my husband was there, seeing all this, hearing all this, and trying to perform and play the best that he can for this country. I felt guilt because of my past — it's affecting his performance, it's affecting the team's performance. I was embarrassed. I didn't know what to do. The one thing I did know is that I had to keep turning up, keep supporting my husband and showing these gutless people that I'm stronger than they are."

Then, during the final match in Cape Town, Australian player Cameron Bancroft was caught covertly roughing the ball with sandy sticky-tape to make it swing more when bowled.

He, along with captain Steve Smith and vice captain David Warner were banished from the tournament and packed onto flights home. 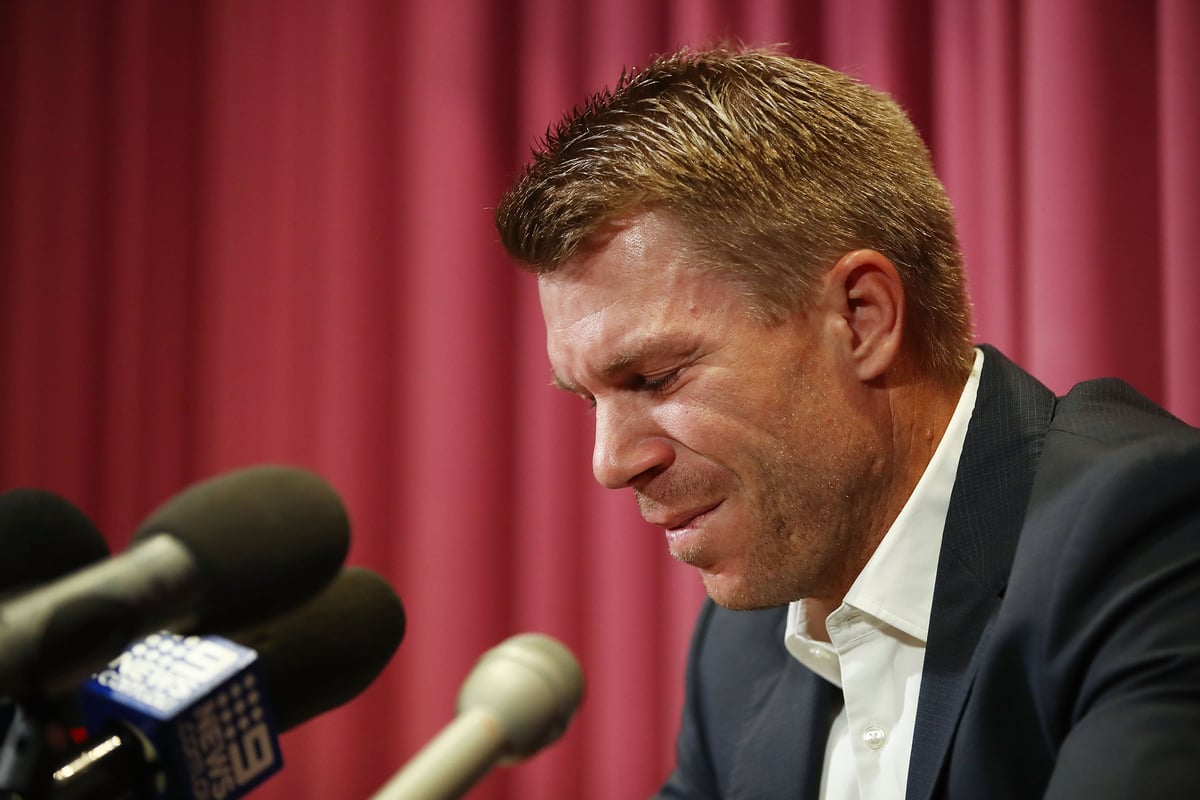 David Warner at a press conference after the ball-tampering scandal. Image: Getty.

"It wasn't until we touched down and we got the heads up how much media was going to be there. And we got ushered through the secret way, or whatever they call it. And that's when I started to feel like we were criminals, and I just broke down. I just didn't think we deserved to be treated like criminals. And when you've got two kids, you're pregnant — and no one knew I was pregnant — so obviously, I was highly emotional. And for my kids to have to be confronted by the flashes of the cameras and the microphones in our faces... As a mother and all you ever wanted to do is protect your kids. It was it was very, very, very difficult.

"People said that we used our kids as human shields, and things like that. It's like, we're parents, what do you want us to do with their kids? Should they walk out on their own?"

David was suspended from the sport for 12 months and charged with bringing the game into disrepute.

"All while doing this, I had my miscarriage, and we kind of just had to just park that. Because although it was extremely important, my husband needed me more than I needed me. It was a really, really hard time. It's like a big blur because it was just anything that we did was wrong. Anywhere we went, there were cameras. My poor kids were just always like, 'Why is there this? Why is there that?' And then having to just live — try to live — without [being] embarrassed. Because people make mistakes, people do things. And we should still be allowed to live as best as we can."

David ultimately made a successful return to the Australian team in 2019, and Candice recently appeared on the grueling reality show SAS Australia — a chance to achieve something of her own again, to reclaim her identity.

"[Shame] is just something you learn to deal with. You just know that every day gets better and better. And we are very lucky, we have sport, because with sport you have redemption. So you have the opportunity to prove yourself wrong, you have the opportunity to score big score, and people go, 'Wow, look how well he's come back.' ... You just have to learn to deal with it, and you know that through hard work and just doing the right thing, people will eventually see that and appreciate it."

You can listen to Candice Warner's interview on the 'No Filter' podcast here.

If you or a love one has experienced pregnancy loss, 24-hour phone support is available from Sands Australia. Please call 1300 072 637.