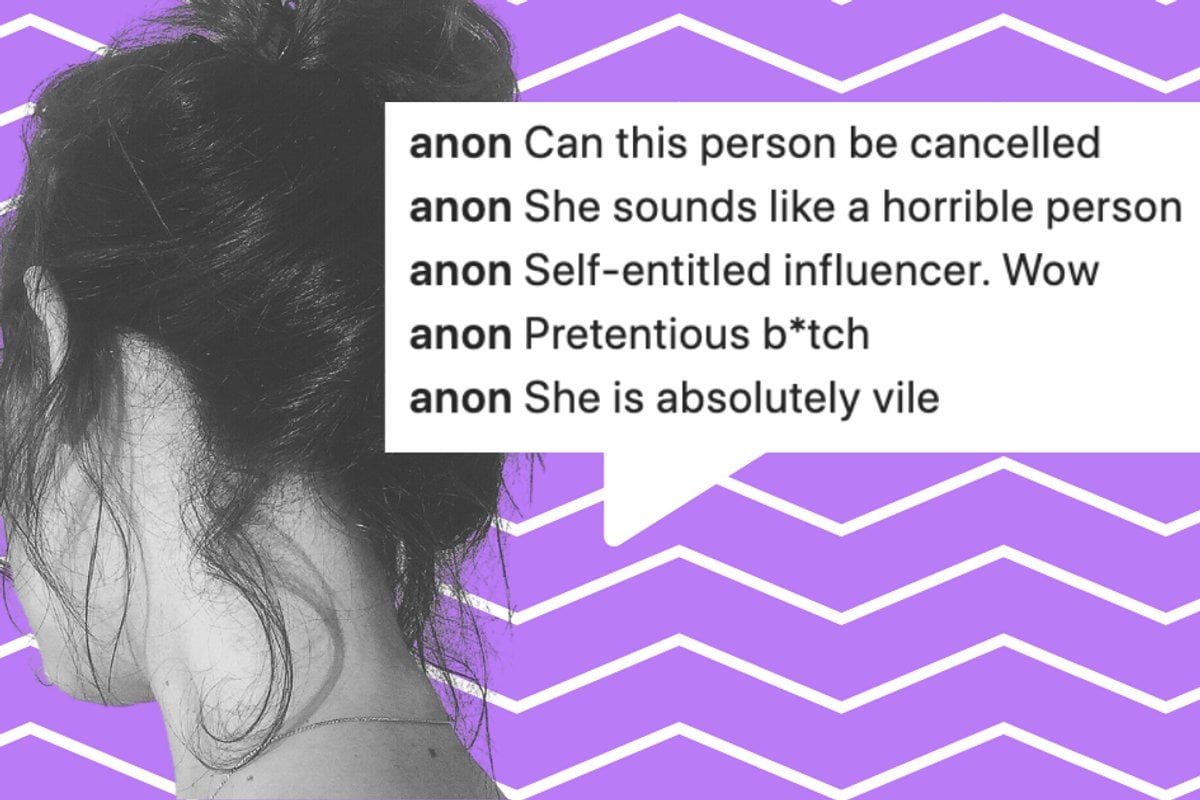 For nine months, I've co-hosted a comedy podcast called Cancelled. It tackles the ridiculousness of cancel culture, while re-examining the stories of those people or TV shows or institutions that frequently come up alongside the word 'cancelled'. But alongside the humour, an uncomfortable truth has emerged time and time again: the stakes are different for women.

No one is hated on the internet like a woman who's done something that's not that bad.

Let me start with a story.

It’s a real one, but I’m taking out the names of the people involved because this isn’t about them. It’s about the phenomenon that happens over and over again, that we never get to properly interrogate because we want to talk about THAT WOMAN SPECIFICALLY AND HOW HORRIBLE SHE IS.

A young woman books a hotel for her honeymoon and after having to cancel her wedding because of COVID, she wants a refund. The accommodation won’t allow it unless it’s re-booked, and so as the date of the original honeymoon approaches, the woman shares a post with her half a million followers.

The company, which she’s tagged, won’t refund her, and she thinks it’s unfair because she gave them eight months' notice. After posting about her predicament, she did receive a refund. But not before her request was shared by an Instagram page that claims to hold influencers to account, criticising her for ignoring the terms and conditions of her booking.

The horse had bolted. The young woman was entitled, privileged, exploiting small businesses, oblivious to the way many Australians had struggled throughout the pandemic, using her following to be a bully, and entirely out of touch.

What a f**king brat

What a horrible person

Will someone tell her she’s not funny too?

A number of Australia’s major news organisations followed the story, with one youth publisher posting updates for weeks. They covered her inadequate apologies, her leaked emails and other bad behaviour from the same influencer - it was, in the online space at least, front page news. 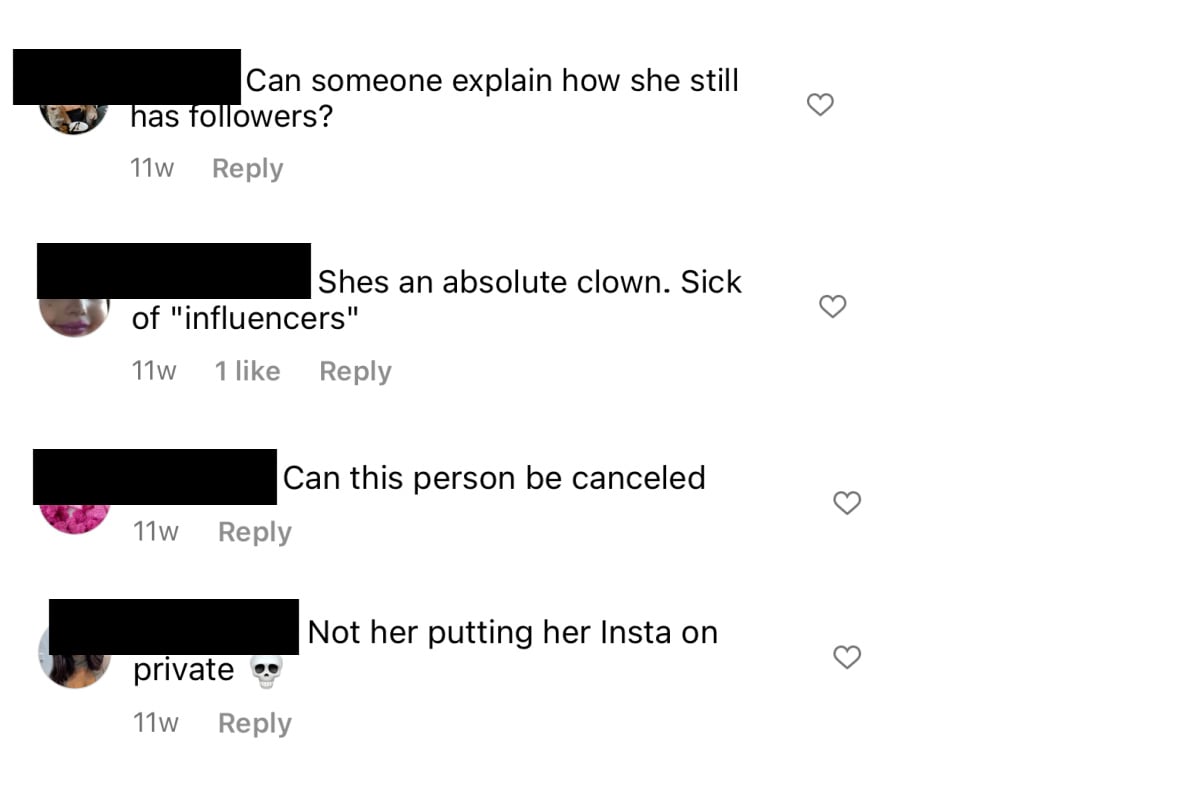 And look, it’s not entirely ridiculous. Today, you vote with your clicks. Businesses are built on clicks. Platforms are established and wealth is created and careers are birthed. Withholding your ‘follow’ is our tiny power as an individual, and we don’t want to follow people who are at odds with our values.

But it doesn’t work.

I’d argue that if being a good person matters to you, many inescapable elements of the online world are at odds with your values. The medium itself breeds narcissism and greed and envy. Ironically, it’s in this morally corrupt environment that we demand pure, perfect ethics from the people who take up space. Loud voices follow them persistently, calling them out and holding them to account and demanding they take responsibility. Paradoxically, when this happens, the Bad Person’s platform often grows. It did for the ‘f**king brat’ who asked for a refund.

This reality - the one where highly criticised people continue to work and have a voice and cultivate an audience - is often used to discredit the controversial concept of ‘cancel culture’ and prove that it doesn’t exist at all.

No one is really cancelled, it’s argued. There’s no such thing as cancel culture because most of us can’t point to a person who’s truly been cancelled - who has been silenced to the extent that they’ve lost everything.

But perhaps that’s not what we mean when we talk about cancel culture. Maybe cancel culture doesn’t refer to being ‘cancelled’ like a bad TV show - removed from the schedule, never to return again - but the phenomenon I’ve just described. The cycle of a person doing something questionable, a wave of outrage accumulating force, and ultimately crashing down with impenetrable, mass hysteria. It’s the spectacle of trial by Instagram or trial by Twitter, where a defence only serves to make you more guilty.

The individual at the centre of it might not be unemployed for the rest of their lives, but they will always have a mark against their name and their reputation. Whenever they’re mentioned, the thought will cross a listener’s mind: what did they do again?

But back to the story. Because the clue as to how it would all unfold was in the first three words: A young woman.

I don’t really agree with asking a business for a refund in front of your half a million followers. But people behave in ways we don’t agree with all day, every day. When a man does it, it folds into our nuanced, multifaceted understanding of who he is as a person. When a woman does it, it proves what we’ve always known about her: she’s everything that’s wrong with the world, personified. 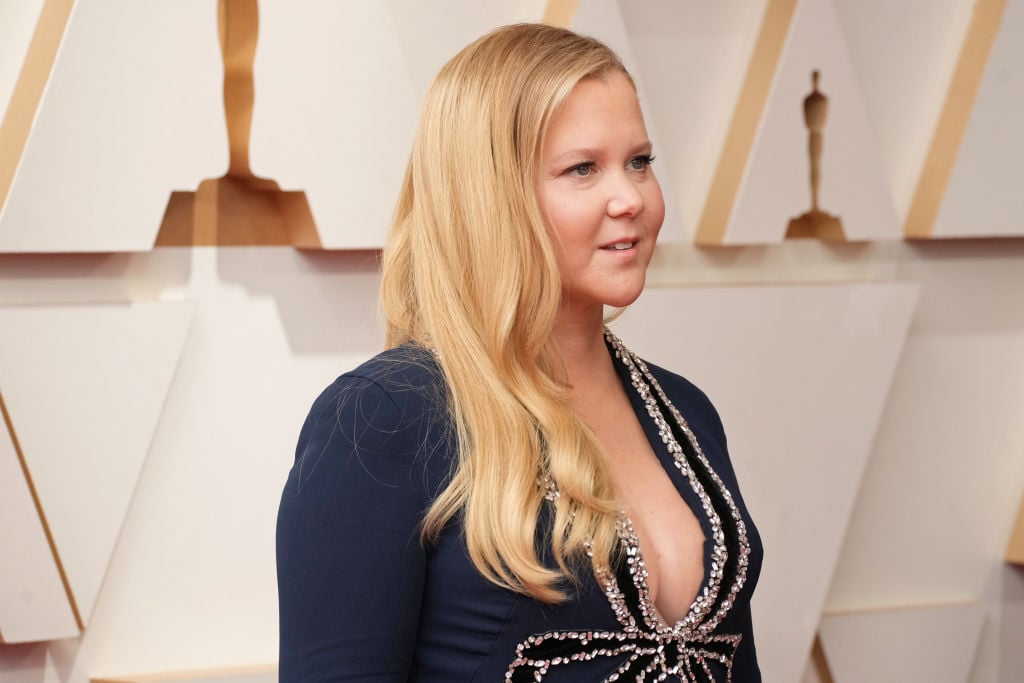 Amy Schumer is a recurring target of internet hatred. Image: Getty. This double standard is obvious in a few ways. First, a woman has to do far less than a man to incite masses of hate. If a man asked a hotel for a refund, would we know about it?

Instagram watchdog pages and podcasts are almost entirely dedicated to interrogating female creators, a reality made more complex by the fact that it’s women following them and engaging with them. Women want to know what other women have done wrong. It’s internalised misogyny, and it serves to police women’s behaviour and silence them.

Culturally, we expect more from women. We want them to be sensitive and fair and kind and considerate and inclusive - which are all admirable traits. But the fact that we have such rigid ideas of how women should behave means it’s far easier for them to step outside those boundaries.

A man can say something silly and have it just be silly. They can ask for a refund because it’s their money and they want it back. Their work doesn’t have to lift other men up or make the world a better place.

Take a recent example. Few people elicit hatred on the internet quite like comedian Amy Schumer. Hosting the Academy Awards, she was accused of sexism by making a joke about Kirsten Dunst, insensitivity around incest by referring to Maggie and Jake Gyllenhaal’s ‘marriage’, and joke theft, because one of her lines bore a striking resemblance to a tweet from 2020.

A recurring joke after the awards show was that it was a shame it wasn’t Schumer who was slapped.

Somehow, the vitriol towards these two comedians was on par. As though jokes that can be wilfully misinterpreted as sexist are the same as actual, institutionalised sexism. As though stealing a joke (which most mainstream male comedians have been accused of doing) is a crime in the same realm as sexual misconduct.

The second way the ‘cancellation’ double standard exists is when it comes to men and women facing completely different consequences for the same behaviour.

Consider how Ellen DeGeneres was dragged through the media when allegations emerged of a toxic work environment on her show. Compilation videos were stitched together showing the daytime TV host being ‘rude’ to guests. A viral Twitter thread accused her of being “one of the meanest people alive,” and encouraged users to share stories they’d heard of her cruelty, promising to donate to a food bank in return.

Of course, there was no way to verify these online accounts. After an internal investigation, Ellen faced the camera and apologised for what went on at the show. In 2021, it was announced that Ellen would come to an end in 2022.

When the Dr Phil show was also accused of having a toxic work environment, the response wasn’t quite the same. You could argue that Dr Phil has another level of responsibility, given that the show deals with vulnerable guests, but the story just didn’t take off in the same way.

Listen to this episode of Cancelled on Dr Phil. Post continues after podcast.

Meanwhile, David Letterman is notorious for employing very few female writers on his show. In 2009, there were zero. In the same year, he confessed to engaging in sexual relationships with several female employees while being married to Regina Lasko. She was also a former staffer.

Allegedly, the women who had sex with him found themselves with more opportunities than the women who didn't. One woman was still a student. Another was his personal assistant, and after his on-air announcement, she was placed on a 'paid leave of absence'.

Staffers always said he wasn't particularly pleasant to work with. One told a journalist, "there comes a moment when he turns on you," while others described him as deeply unhappy, abrasive and "crudely sexual".

But Letterman has always been understood to be a complex, nuanced human being, in a way DeGeneres wasn’t allowed to be.

There is a certain brand of vitriol reserved for women who are guilty of small, almost meaningless crimes, with an ambiguous victim.

Not being funny. Not being relatable. Not acknowledging their privilege in the specific way the internet would like them to. Not reflecting everyone’s experiences in everything they say, all of the time.

Our attention, collectively and individually, is finite.

But while we're focusing on the woman who asked for a refund for her honeymoon, what are we missing? What is the consequence of that misspent energy?

Equally, what are we truly trying to say? That one ill thought out act makes you a terrible person? That one post on social media can be extrapolated to paint a full and comprehensive picture of who you are and who you always will be?

Of course, the last thing you're allowed to say in the middle of a pile on is that what the person's done isn't actually that bad, lest you become just as guilty by association. But any phenomenon that manufactures hate disproportionately against women needs to be interrogated.

Maybe the woman who asked for a refund is fine. Maybe the national commentary about her behaviour didn't crush her, and she's learnt to live in a way that isn't dependent on other people's opinions.

But again, this isn't about her.

It's about a phenomenon that ends with a woman at the bottom, lambasted for a transgression that the internet decided was horribly, horribly wrong. Like a shark who goes after a barely perceptible fish when a far bigger one is just outside its field of vision.

For more from Clare Stephens you can follow her on Instagram or TikTok. You can also listen to her comedy podcast, Cancelled, on Apple podcasts or Spotify.

Reply
Upvote
1 upvotes
So serious question: how should celebrities and people who make money on social media be held accountable? This silly idea of "be kind - if you don't have anything nice to say, just scroll on" basically means that celebrities and social media profiteers can carry on in an echo chamber, with impunity and no censure at all.
I quite agree that women are held accountable more often and to higher standards than men - this is the case in real life, too. But conflating that issue with the very real conundrum of giving celebrities and social media individuals a free pass when they act unethically or disseminate misinformation or lies is not helpful.
C
cat a month ago

Reply
Upvote
@mamamia-user-482898552 I guess the idea is that people just stop following & then they lose their influence? That would work for people behaving badly. It would be dangerous when it comes to disinformation, which really needs to be called out, either by people challenging it in the comments or by platforms & even regulatory bodies removing it.