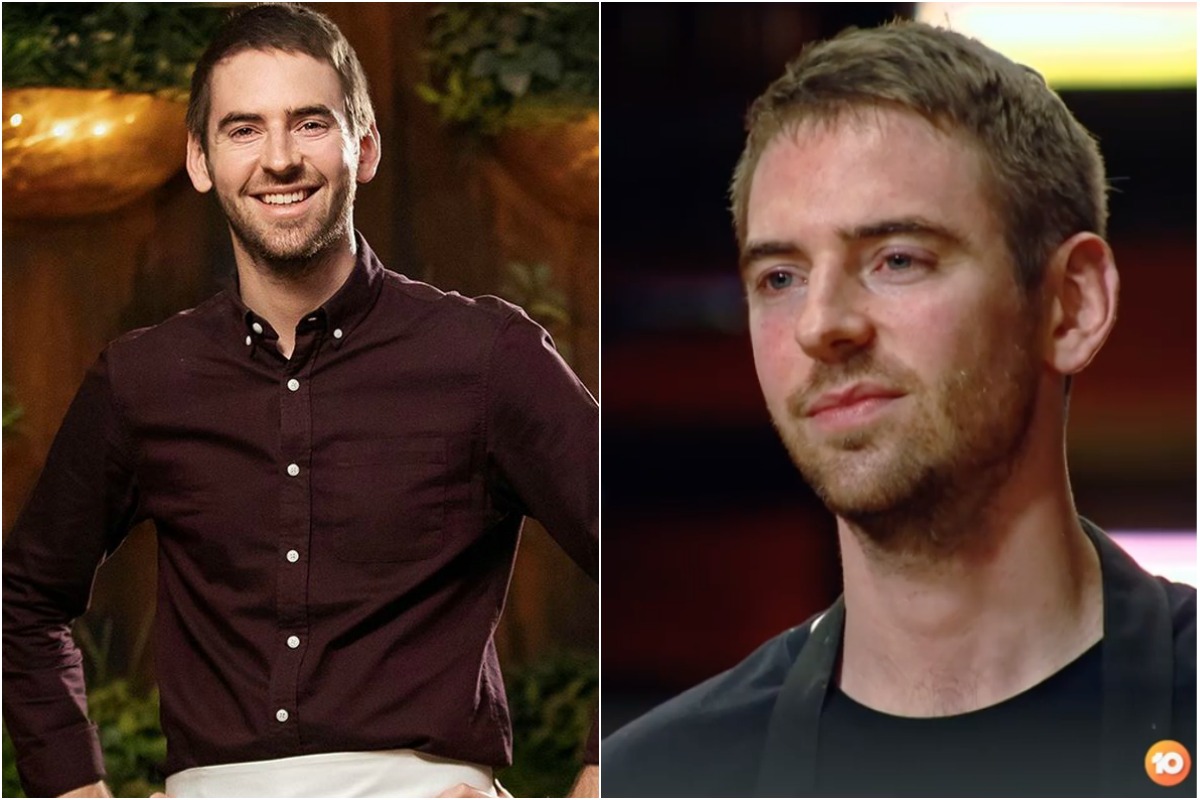 There are only a few days left until the stressful, nail-biting end of MasterChef: Back to Win.

And after one of the most emotional cooks of the entire competition last night, Callum Hann was eliminated, leaving Laura Sharrad, Reynold Poernomo and Emelia Jackson to battle it out in the semi finals for the MasterChef crown.

If you’re not watching this season of MasterChef, this trailer might make you reconsider. Post continues below.

On Tuesday night, Callum and Laura - both great mates from Adelaide who have worked together previously - cooked in the second round for their spot in the top three, after Reynold wowed judges in the first round. Callum opted for a fish dish, while Laura made a strawberries and cream dessert.

Unfortunately, Callum's fish let him down, and he was eliminated from the competition with an emotional farewell.

Everyone, and we mean everyone, was devastated that the nicest (and of course, unbelievably talented) chef was sent home.

"The name Callum Hann is synonymous with this competition," Melissa Leong told a teary Callum.

"Ten years ago you might have walked into this kitchen as a boy, but this time you’ve returned as a dad. Every time you walk through those doors, humility and integrity has always followed. We are so proud of you."

Then Laura shared that after fan-girling over Callum for years, she was so proud to be cooking together with him in MasterChef: Back to Win.

"I never thought that we would be here together. We’ve worked together, we’ve hung out, we’re really good friends and it’s been really amazing to do it with someone who is as amazing as Callum. He’s so loving, so humble, so gracious.

"He’s an amazing dad. He should be really proud of himself," Laura said.

While Adam Liaw, who beat Callum to win season two of MasterChef, confirmed, just like the others, that Callum is truly the most wholesome guy on television.

You all really need to know that @callumskitchen's wholesome nice guy persona on #MasterChefAU is all an act.

In reality he's actually even nicer.

It was an emotional end for one of our MasterChef favourites and we can't wait to see what he does next.

Here's everything you need to know about the MasterChef 2020 top four contestant, Callum Hann.

Big news! I’m (temporarily) swapping my @sproutadl apron for a @masterchefau one. I’m excited to be back in the kitchen as a contestant. Wish me luck! #sproutadl #masterchefau

In 2010, Callum was 20 years old and studying at university when he decided to apply for season two of MasterChef.

"I was studying Mechanical Engineering and Sports Science at Adelaide Uni and I was working at a restaurant… Cooking was my thing to get away from maths and science," he told This is Radelaide.

And despite being the youngest contestant in the competition, he came runner-up behind Adam Liaw, after the pair had to recreate Quay’s Peter Gilmore infamous dish, the ‘Snow Egg’ in the final challenge.

After appearing on the show, Callum moved to Melbourne for a few months to work in George Calombaris’ restaurants, The Press Club, Hellenic Republic and Maha.

He then opened his Adelaide-based cooking school, Sprout, with dietician Themis Chryssidis, in 2011.

When speaking to This Is Radelaide, Callum explained that his aim is to educate people on how to eat healthy without breaking the bank.

"A lot of people think that eating healthy is expensive, which is a real shame, it’s this strange perception," he explained.

"The other thing is convenience. People go, 'It’s easier for me to dial up a pizza than it is to cook something at home.' But I think that’s a little bit lazy. Also, you do have to prioritise, you have to put cooking as an important thing in your life and I think the easiest way to do that is to make it fun, and that’s what we try and do at Sprout."

He also released his first cookbook, The Starter Kitchen.

In 2012, Callum returned to the MasterChef kitchen for the second time.

In that year, MasterChef changed its formatting and brought back returning contestants, just like they are now. The season, which was titled MasterChef: All-Stars, brought back familiar faces who competed again this current season, including Poh Ling Yeow, Hayden Quinn, Chris Badenoch and season one winner, Julie Goodwin.

And 22-year-old Callum took home the winning title during the finale, beating Chris when making the Snow Egg... again.

Following his win, Callum released two more cookbooks, I'd Eat That and Quick. Easy. Healthy, and became a host of the state-based travel show, SA Weekender in 2017.

On a personal note, Callum married his partner Crystal Jagger in 2018.

Today is my two month wedding anniversary. I can say with 100% confidence, that @crystal_jagger you are the best wife in the world. So proud of everything you do with @jaggersleepwear.

And in October 2019, they welcomed their first child, Elle Madeleine Hann.

Welcome to the world Elle Madeleine Hann. I’m excited to start this next adventure!

"Crystal and I are excited to become parents," he told Confidential.

"Right now we are enjoying every precious moment. I'm a little biased, but I think she's pretty damn cute!"

And soon after the arrival of their daughter, Callum entered the MasterChef kitchen for the third time.

"I was so umming and ahhing about whether I should come back or not because it’s one of those things," he told HuffPost Australia.

"The first time you’re on the show, you’re doing it to see if cooking is the life for you I guess. So, it’s a real change of lifestyle."

He also explained that after all the success that came after his first two appearances, he wasn't sure if he needed to go back.

"I’m doing the things that I wanted to do. I’m running my cooking school, I’m running my catering business and food education so I’m kind of living my dream life I guess," he shared.

However, as many other contestants have shared, you cannot beat the feeling that kitchen gives you. So Callum decided to bite the bullet and return.

While the show has been full of exciting mystery boxes, pressure tests and guest-judges, Callum explained that the COVID-19 pandemic created some difficulties for the contestants who travelled interstate to compete.

"I live in Adelaide and it’s filmed in Melbourne. So at the start I wasn’t seeing my family very much," he told HuffPost Australia.

"My wife and baby were coming over to visit and I was trying to go back to Adelaide on the weekends, but with the borders closing it was like, 'Well if you don’t stay here, I might not see you guys until we finish the competition.'

"So fortunately, they’ve been able to stay for a little bit which is really nice."

"It was really difficult," he told TV Week.

"When the South Australian border looked like closing, I had to really think about what I was going to do. I couldn't face being separated from Chrystal and Elle for weeks."

Despite that slight inconvenience, Callum only has positive things to say about returning to the show.

"One of the interesting things about the show is that we’re all in direct competition with one another, but it is such a positive, supportive environment and everyone is friends and genuinely wanting each other to do well," Callum told In Daily.