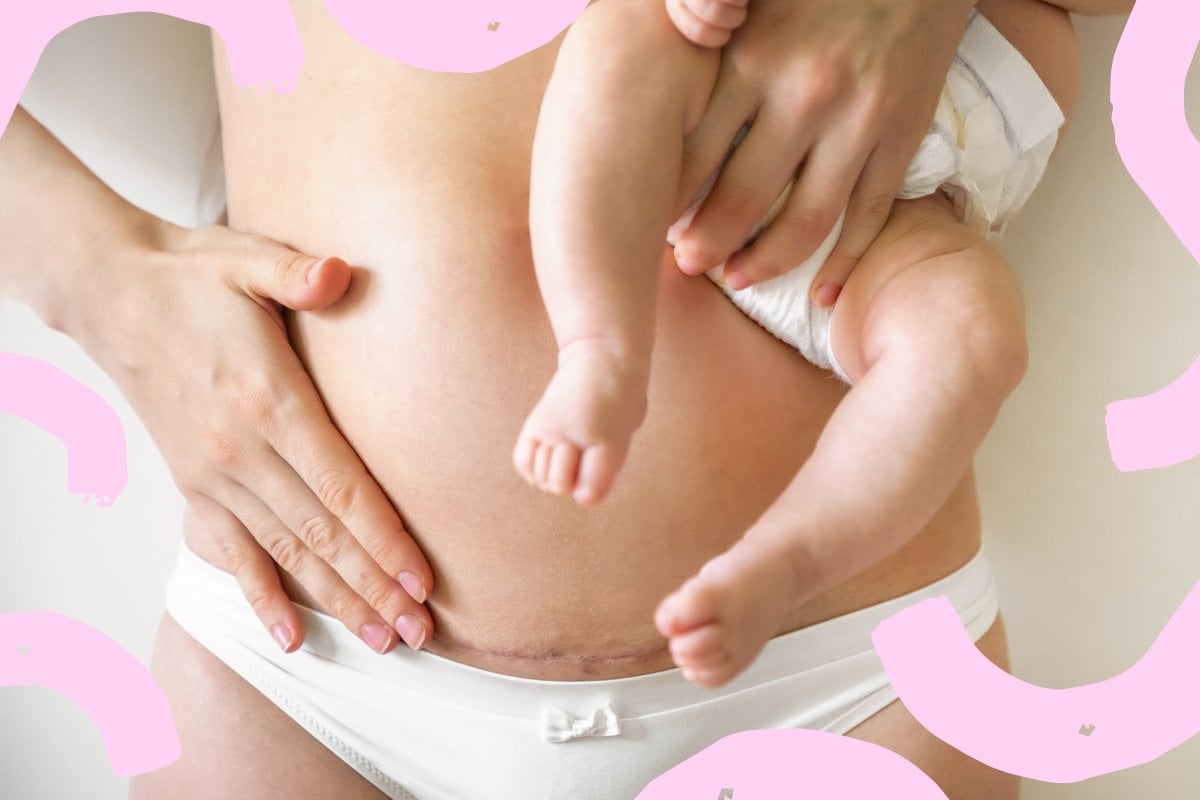 Whether your c-section birth was by choice or needed in an emergency, recovery from major abdominal surgery while caring for a newborn can be a physical and emotional challenge.

Mamamia heard from 16 women on what surprised them the most about their c-section and the recovery process; from the good to the bad and the occasionally funny.

Watch: The thoughts you have while giving birth. Post continues below.

I didn’t really appreciate how hard a c-section is on the female body until I had one and had to learn how to safely lift myself up out of bed.

It took much longer to recover than I thought - a good five months. I still remember six weeks postpartum trying to do a pushup on my knees and collapsing to the floor because I didn’t have the strength to push myself up and then doing my first HIIT class at four months postpartum and walking out in tears.

We need to remember to really look after ourselves and cut ourselves a little bit of slack!

2. Amanda-Leah on the emotional strain.

I found out while in labour with my third that she was in the breech position.

I tried to still deliver her vaginally but ultimately ended up having an emergency c-section. I was teary and more emotional after the c-section than the previous two vaginal births. I also hated being in hospital for the two nights.

I found it frustrating at times being restricted by what activities I could do while recovering, especially since I already had an 18-month-old and a three-year-old to look after.

For me, it was harder emotionally after having a c-section but am very grateful I have a healthy baby because if it.

3. Alyshia on her husband stealing her thunder during the birth.

I LOVED my birth! Loved, loved, loved! I was induced and didn’t dilate, so the next morning we opted for an emergency c-section.

It was so calm and relaxed - we were cracking jokes throughout. And then once my bub was out my husband fainted - so he kind of stole my thunder!

Our first family photo is him lying on the floor with his legs up and me on the operating table holding our daughter.

4. Rahni on having a bad experience.

The recovery was awful with the most sore and tender scar. I had to wear knickers up to my boobs because anything that sat on or near the scar was so painful. Getting in and out of bed or a chair was impossible and made it so hard to learn how to breastfeed.

I was only managing a walk around the block weeks after. And OMG the bloating - my legs and thighs looked like those rolled roasts wrapped in string because they were so swollen.

Apparently my experience was a tad worse than others due to it being an unplanned one and them needing to use forceps to get bub out - so don’t be scared if you’ve got one coming up.

My first was an emergency c-section and naively I figured they’d kind of “suction out” all the blood and afterbirth.

I mean they had you open on the table, wasn’t there some magic medical vacuum to sort all that out? So, for me the bleeding was the biggest and most unexpected thing.

6. Alexandra on the difference between planned and emergency recovery times.

I had two c-sections, one emergency after a long labour and the other a planned c-section due to [baby being] breech.

I noticed a huge difference in the recovery time and pain between the two: the emergency c-section had a much longer recovery time. Also, the planned c-section took a lot longer, as they [the medical team] had the luxury of being able to take their time and go carefully, as opposed to just trying to get it done.

7. Tessa on suffering with unexpected ‘shakes’.

After being induced and having a very long painful labour they decided it was best for me to have a c-section.

I had pretty much every drug so there were a few things I didn’t expect, one was the shakes during the procedure.

Apparently, it’s [caused by] the pain medication but I honestly couldn’t stop shaking and my husband thought I was freezing but I wasn’t - I just couldn’t stop.

8. Amy on shaking, sweating and numbness.

Shaking like a leaf during the surgery and afterwards for about an hour; showering the next day and sweating so much trying to dress myself after that I really shouldn’t have bothered with the shower; feeling like my guts were about to fall out every time I rolled over for about a week after surgery... Also, numbness above the incision even 15-months post-partum.

9. Kylie was surprised by mum guilt.

I had an emergency c-section and my baby was rushed off to special care straight after. I didn’t feel any immediate bond with him as a result, and for the first 24 hours, didn’t even really care to ask about or hold him.

After we got home, I had a lot of mum guilt - because my baby missed out on skin-to-skin, formula was his first feed (not colostrum or breast milk) and his first night was in a special care nursery.

It took me a really long time to bond with him, and then an even longer time to forgive myself for all the mum guilt that came with it.

The biggest surprise was gas!

I had awful pain in my stomach and didn't know what was going on. I was told they put air in you during surgery and I needed to get up and walk around and just fart a bunch, get the gas out and I'd feel better!

11. Haidi on scarring and feeling regret.

Physically, I had a textbook recovery. Was fairly mobile straight away, bleeding stopped six weeks post-partum.

The main downside is the scarring - I am prone to keloid scarring and my scar from the surgery is quite angry and pronounced. Even though it’s under the bikini line, I am always a bit taken aback by it, as a stark reminder of how much motherhood has changed me, and changed my body.

I would say the emotional part didn’t kick in until much later, months later.

My daughter is now 18 months-old and part of me wonders if I should have pushed myself to, well, push.

But somehow as I settle into motherhood, that’s an emotional fullness of the whole birthing process I wish I had experienced. If we have a second, I think I would like to try a VBAC [vaginal birth after c-section].

12. Sian on the initial pain and a fast recovery.

I choked on some mashed potato the next day (after the birth) and I thought I was going to die from the pain that the coughing caused.

But then after about three days I was off pain medication apart from Panadol and was really amazed by how quickly my body recovered (after hearing lots of horror stories!).

13. Kat on slowness of recovery.

The biggest shock for me was walking into the operating theatre and the room being huge and the medical team consisting of 20 people.

I didn’t know that I would shake from the spinal. I knew that the first walk after would be brutal (I did it at 3am, eight hours later with zero help) but it was still harder than I thought.

I knew that it was major surgery but for some reason I just thought I’d bounce back!

14. Kasey G on overcoming her anxiety.

My mum died less than four weeks before I had my son. She had end stage multiple myeloma (blood cancer).

She bled heavily from the nose and mouth in the days leading up to her death and it was just awful to watch and not be able to help.

I had an extremely traumatic vaginal delivery with my daughter in 2016 (now four years old) and doctors all agreed from the outset that a c-section would be safer for me and bub.

On the day I was terrified and anxious about the blood after everything I'd seen with mum. The operating team were incredible and handled everything so sensitively and did everything they could to help manage how anxious I was.

I get vertigo quite frequently. I didn’t anticipate that I would get it so bad whilst being transferred from the operating table to bed, back to the ward and all that evening when moving in bed. It was awful.

16. Amy on the unexpected happy vibes.

I’d heard so many horror stories and negativity about c-sections, so I was surprised that I really loved mine!

I had a planned c-section and loved how calm everything was. We arrived at hospital, checked in, unpacked our bags and got ready to go upstairs.

In theatre there was lots of laughter and music and a super relaxed vibe from my OB and everyone in the room.

Beforehand I had been terrified about the needle more than anything, but my anaesthetist and his assistant joked around with us the whole time and put me totally at ease.

Reply
Upvote
Nice to hear a variety of experiences! So often you only hear one or the other - either the horror stories or the super easy baby-just popped-out ones, not often do you get the middle of the spectrum.
mamamia-user-105701183 4 months ago

Reply
Upvote
1 upvotes
I had 4 c- sections. The first was emergency and was under a general. Physically I was in a lot of pain afterwards but still recovered quickly and it was managed well with medication. The others were all elective and what I wasn’t prepared for was the overwhelming nausea from the spinal block. Have never experienced anything like it and was by the far the worst part of the experience. So much so that I would have preferred to go under as I didn’t experience any nausea from the general. The 4th was also quite stressful - a lot of bleeding and subsequent quite slow and emotional recovery rate after losing so much blood. I found the physical pain of recovery the easiest part of the procedure.
News
General
Opinion
True Crime
Politics
Sport
Explainer
Entertainment
Celebrity
Reality TV
Movies
TV
Books
Rogue
Royal
Lifestyle
Beauty
Fashion
Weddings
Home
Wellness
Health
Fitness
Travel
Food
Parents
Before The Bump
Pregnancy
Baby
Kids
Teens
School
Parent Opinion
Work & Money
Money
Finance
Career
Lady Startup
Relationships
Sex
Dating
Separation
Friendship
Family
Real Life
Couples