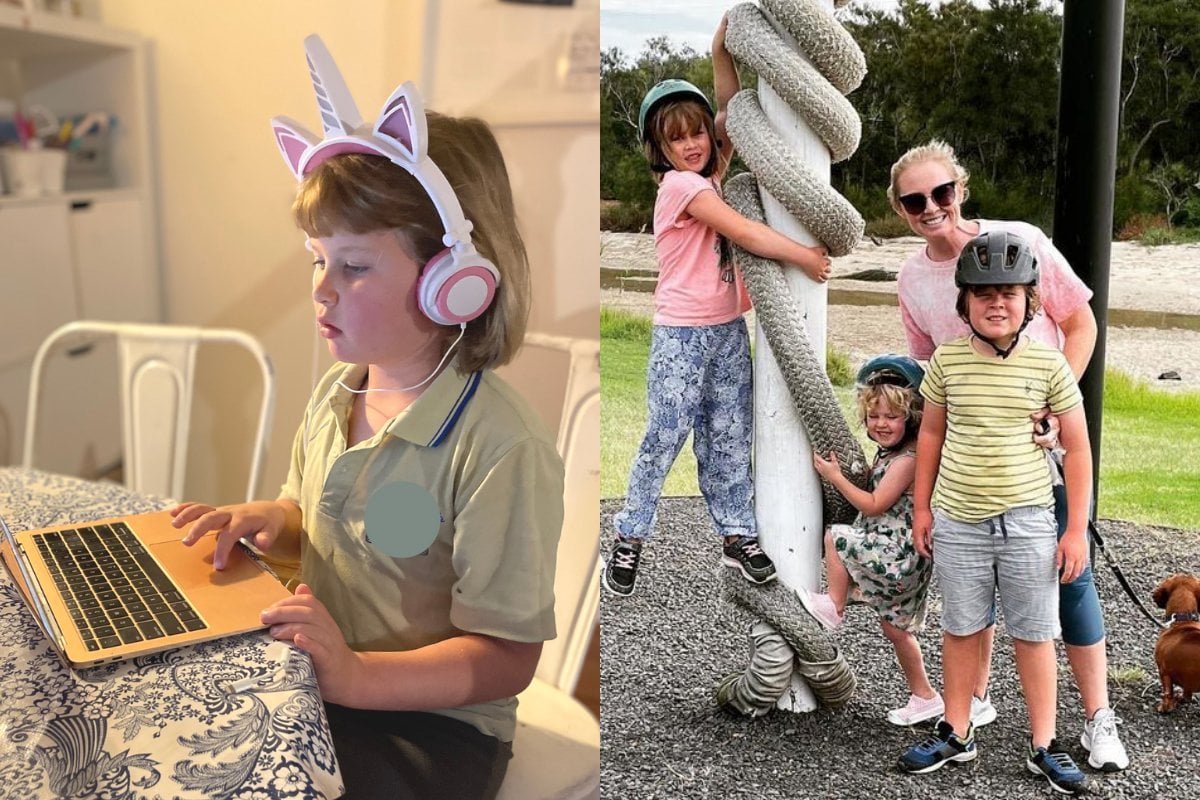 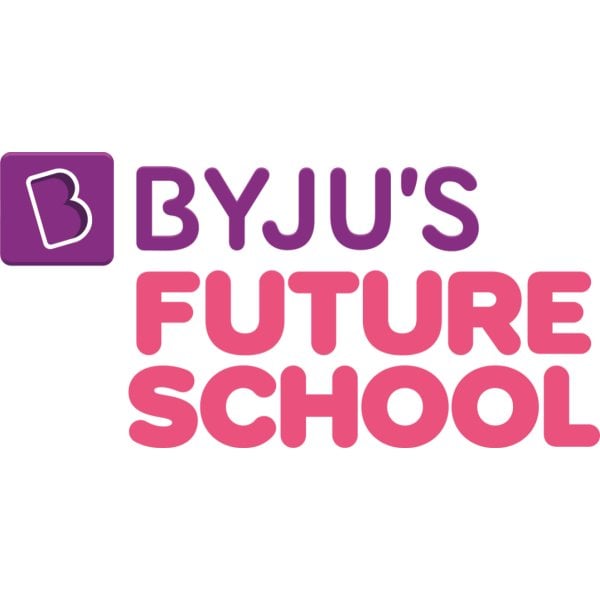 Thanks to our brand partner, BYJU'S FutureSchool

May I confess something?

Despite using technology to track everything from our day-to-day calendars to my dogs’ vaccination status, I am not exactly tech-savvy.

Sure, I use it, I appreciate it, heck I work in an industry (media) that has been transformed by tech, but understand how it works? Yeah, not so much.

I once got lost in the backend of a website and, let me tell you, knowing next to zero about coding, it was a befuddling and humbling 45 minutes.

Thankfully, my children possess skills that far surpass their mother.

But, while my son, at 9-and-a-half years of age has had his fair share of tech immersion, my 7-year-old daughter Evie hasn’t yet had the same opportunity.

And as an app-loving, Minecraft-playing, digital (almost) tween, she was the perfect fit to try a free 1 hour online coding class with BYJU'S FutureSchool.

It's an online learning platform that offers fun and engaging classes for kids aged 6-18 years. BYJU'S that allow them to flex their creative muscles through building, exploring and problem solving their way through the exciting world of code.

I signed Evie up for a free introductory coding class where she would be able to tackle complex puzzles and create animations using block-based command code.

This was like another language to me, as a coding novice, but knowing that Evie would have her own individual teacher who would tailor the class to her individual skill level, I was reassured she would be a-OK.

While Evie was initially dubious, as she had attended countless Zoom classes during last years’ home-schooling stint, she soon perked up when she found out she’d actually be involved in creating and personalising something super cool, not just watching or using the finished product. 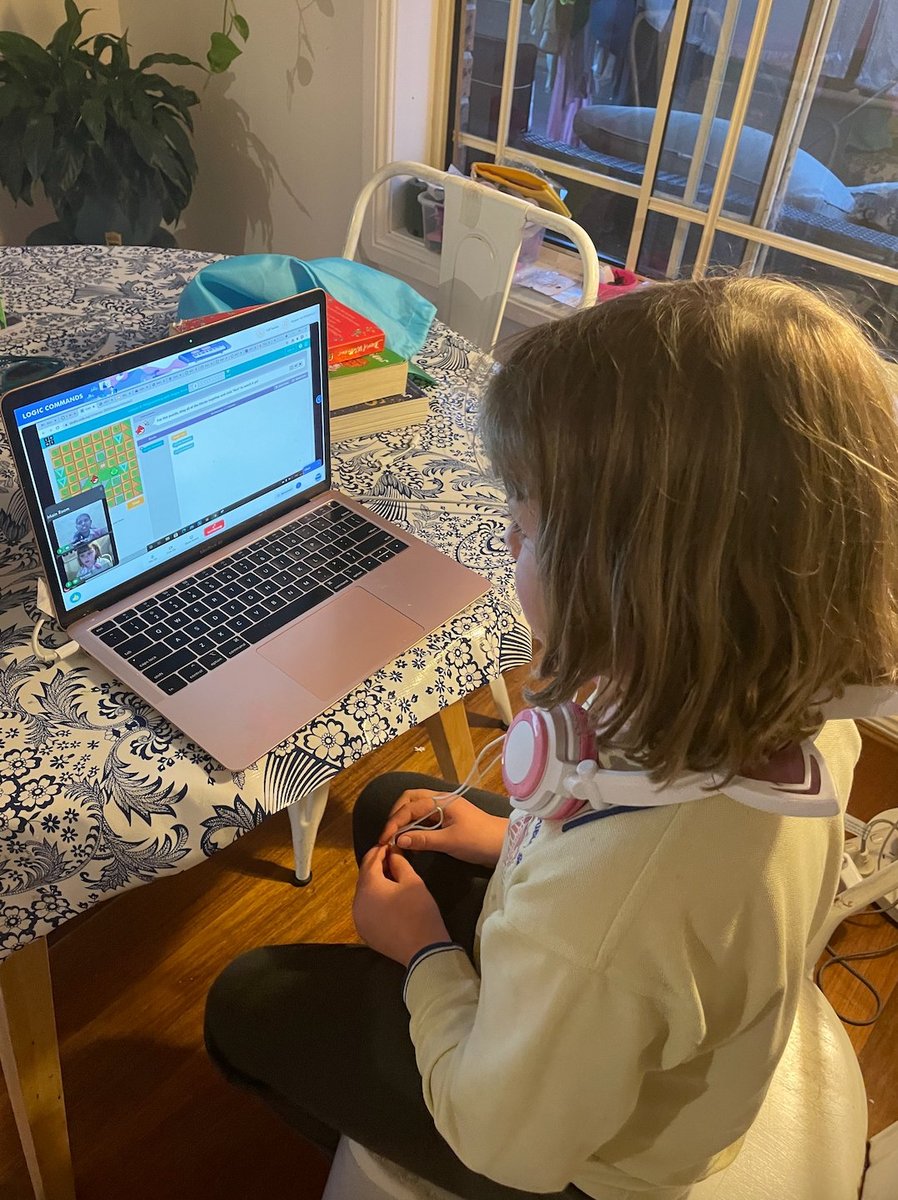 We'd been super keen to find something for Evie that was more leaning towards the creative, fun and engaging activity that isn’t played on a soccer field.

BYJU'S online classes are a fabulous option for us, offering her a creative outlet where Evie can learn a whole bunch of new skills, and deep-dive on making and designing cool things herself (which are outside of having a paintbrush or pencils in hand).

She's a very creative thinker, so we loved that her strengths there could be married so well together with coding. Something which surprised me is that coding isn't just for maths lovers or those with exceptional maths skills: it doesn't matter if you're more of a "left-brained" or "right-brained" thinker.

Evie's problem solving and creative thinking skills are two things she really excels in. I loved that she could flex these skills and build on them with an after-school activity like coding; something that I'd hoped we'd find more ways to get her to practice in real-world scenarios.

Once we’d signed her up for a class, she couldn't contain her excitement.

On the day of her scheduled one-on-one class, we logged on to meet Evie’s teacher who quickly set her at ease with some easy, getting to know you questions which were also designed to gauge Evie’s level of understanding. 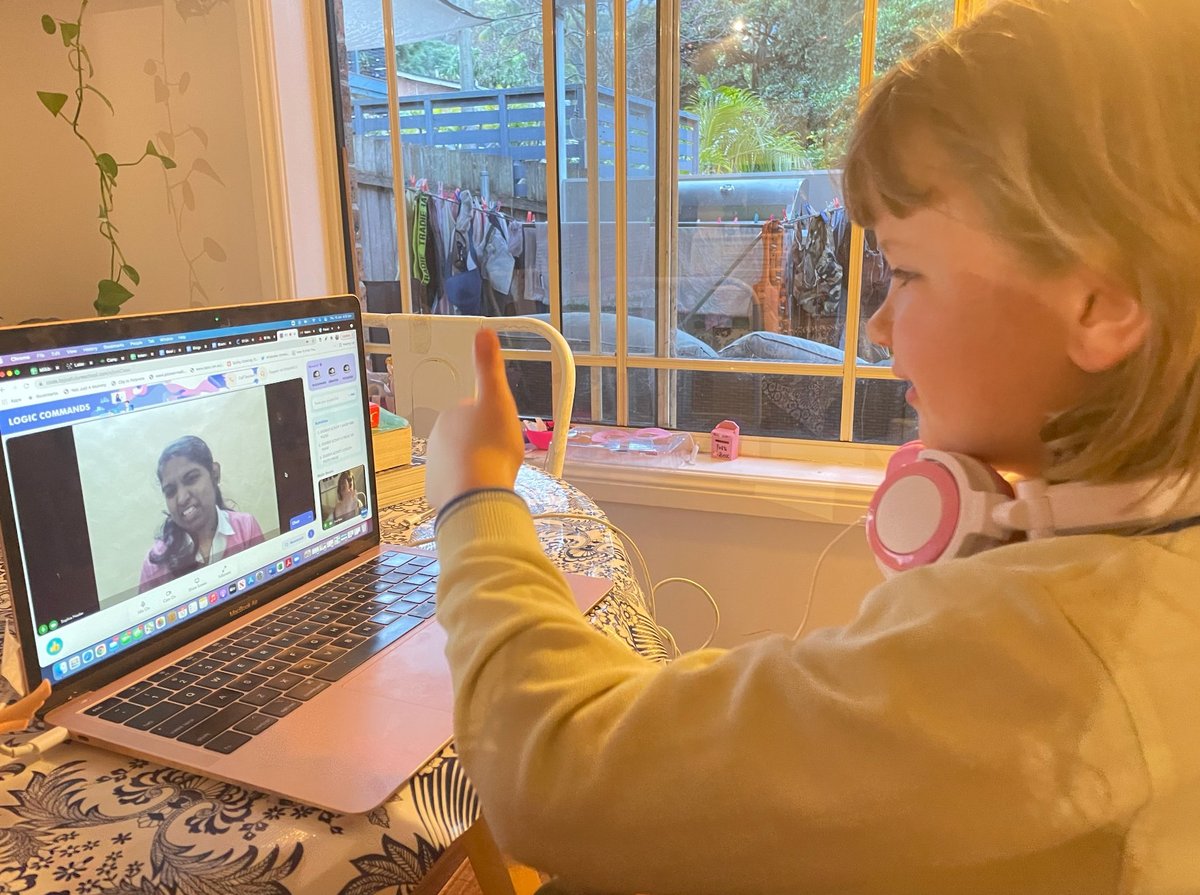 While I was on hand to offer ‘tech support’ (big lols to that), the platform and virtual classroom were easy enough for Evie to navigate solo.

After a rundown of some coding basics, we were onto our first activity, a jaunt into the world of Angry Birds where Evie was familiarised with how code is set up. 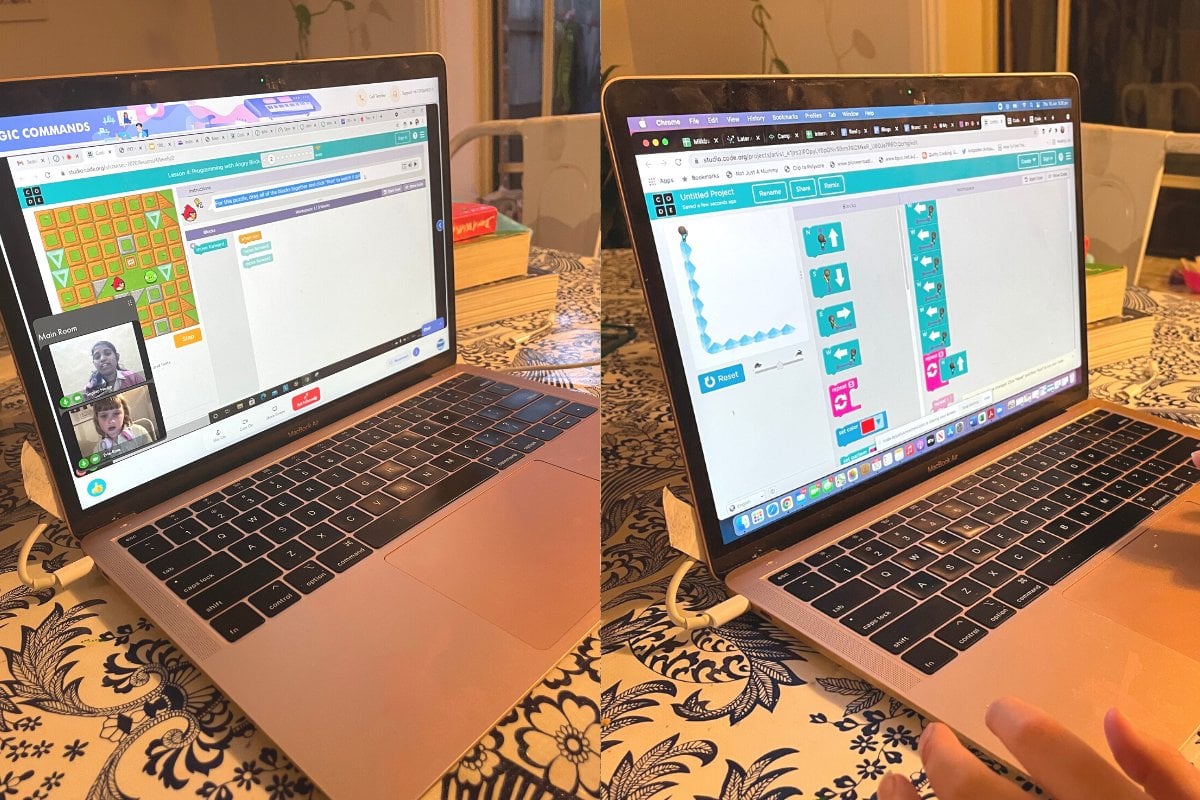 Using block commands that she would drag into place to move her Angry Bird, Evie used her problem-solving skills to write three lines of basic code to manoeuvre through the puzzle. She was so proud of herself when she completed the task and quickly moved onto the next puzzle, where she’d use slightly more complex block commands to move her character across a pond safely.

I was fairly riveted watching the way she, with the guidance of her teacher, familiarised herself with the commands then began creating a sequence to animate her character and help them ‘hop the pond’ to safety.

For this activity, Evie dove straight in using block-based code to create a series of actions that designed her frame.

She worked creatively by choosing her own patterns and colours to complete the activity; an artistic way of working that pencils and paper can't match. She was so impressed when she saw what she’d created all on her own (because we all know, I had nothing to do with it) and her teacher was enthusiastic and encouraging, awarding her points for her concentration, creativity and persistence.

Evie loved the experience and happily rated both her teacher and lesson as "beyond great" after the class finished. 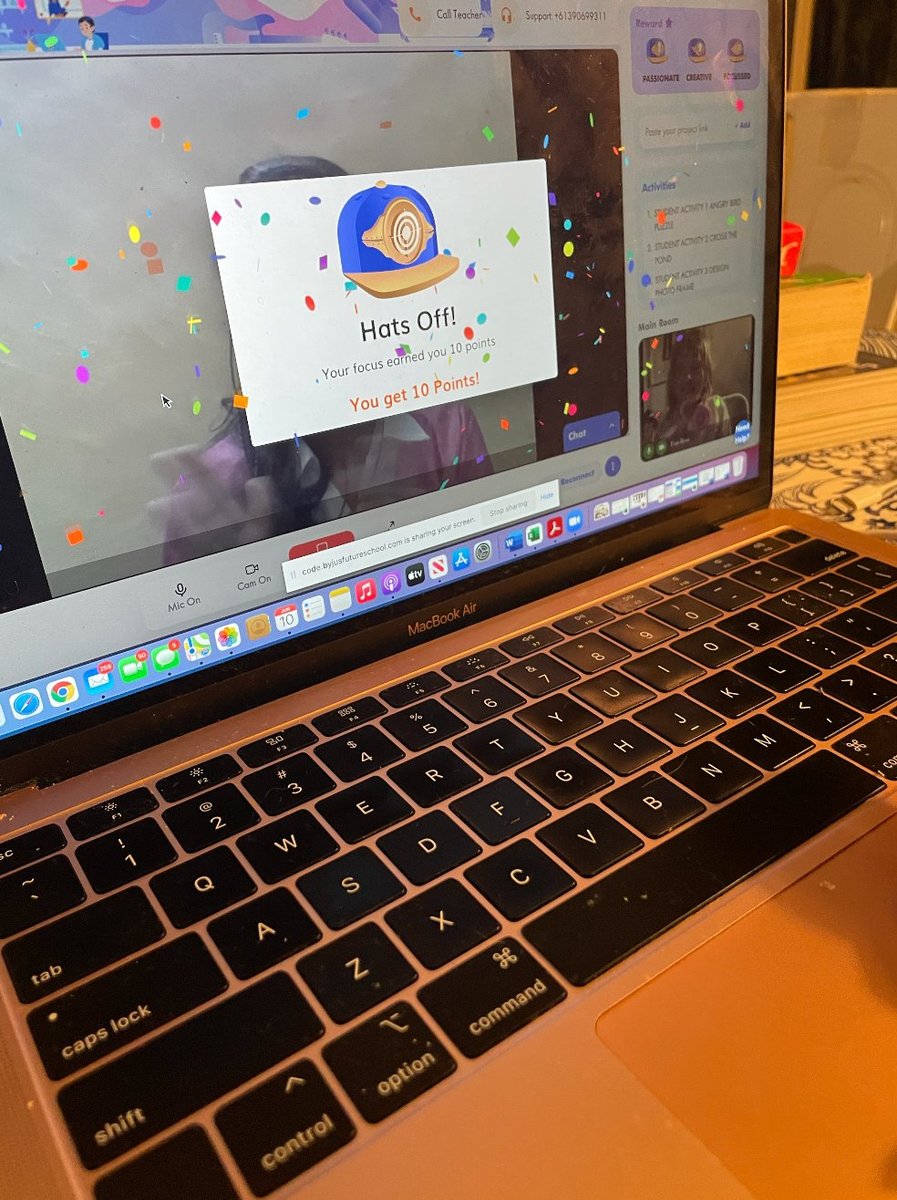 As a parent, it was wonderful to watch my child learn and then master skills she previously had no grasp of. By expanding her horizons early in what creativity can looks like, a healthy interest in the world of coding and creating things from scratch is already starting to grow.

I think she's caught the coding bug, and we're thrilled our daughter has found something she can be artistic with outside of the norm.

I really enjoyed watching Evie use her creative and critical thinking skills and challenge herself to create something that she never would have been able to even an hour earlier.

I couldn't recommend BYJU'S FutureSchool highly enough to other parents. They're on a mission to empower children to take on an active role in creating technology as opposed to just consuming it, and get those creative juices flowing while doing it.

It's super handy as a weekend or after-school activity to keep young minds busy and learning. I love that students from 6-18 years can learn the fundamentals of coding online through BYJU'S expertly designed, completely interactive and, most importantly, fun classes.

Coding as an after-school or extracurricular activity for our kids is definitely underrated.

My other kids kept looking over Evie's shoulder too, and I think they want in on the coding action with their own classes next.

If your kids want to learn to code, or create with maths, sign up for a free 1 hour trial of a BYJU'S FutureSchool class! Check out www.byjusfutureschool.com

BYJU'S FutureSchool's mission is to empower a whole generation of kids to become creators versus consumers of technology. We teach fundamentals of coding; logic, structure, sequence and algorithmic thinking to enable kids to generate creative outcomes e.g. websites, animations and apps. At BYJU'S Future School, we offer a fun and easy way for children to learn coding and maths that is outside a text book. *Free trial class is a one off, only one free class per account.