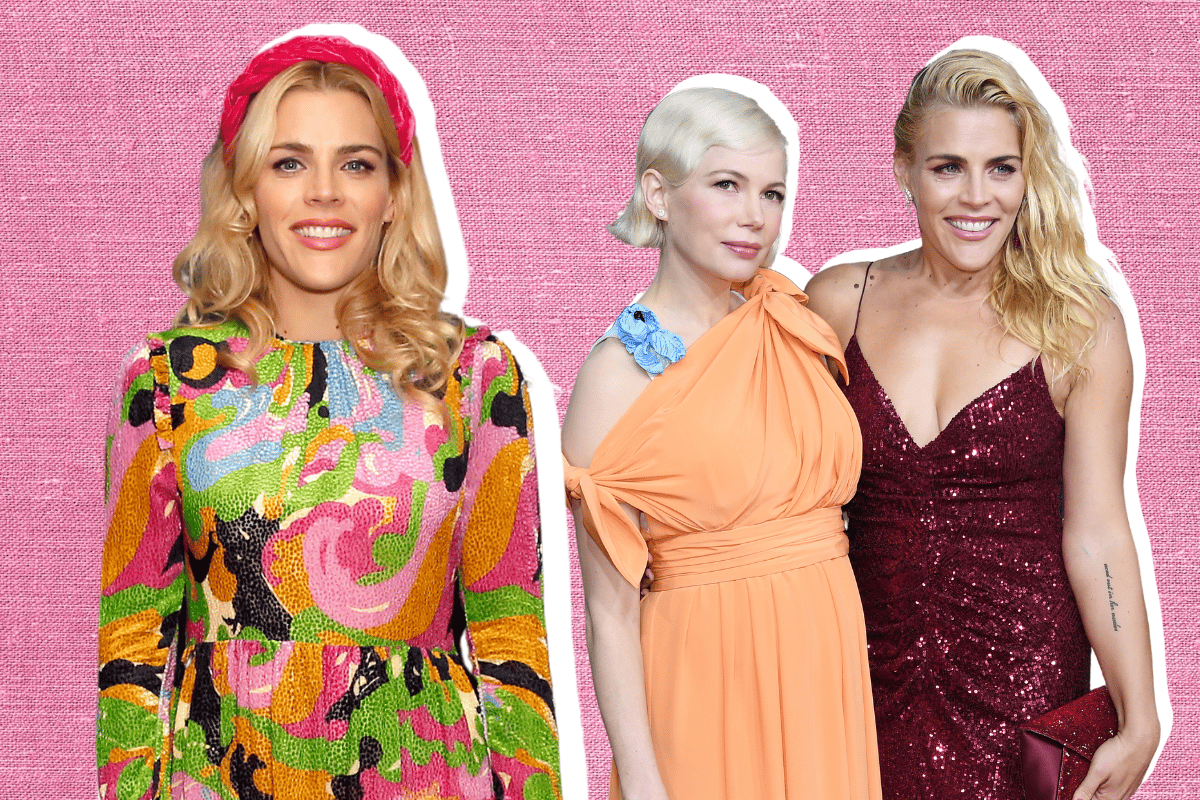 Dawson's Creek actress Busy Philipps is known for being open and candid.

Over the weekend, the 41-year-old shared that she's done a "bad job" with pronouns when it comes to her oldest child, Birdie, who she announced is gay.

"Birdie, my out kid, prefers they/them," Philipps said on her podcast, Busy Philipps Is Doing Her Best. "I f**kup sometimes, but I'm trying my best at that too."

"Birdie said that they would like their pronouns to be they/them and I haven't been doing it because I have this public persona and I want Birdie to be in control of their own narrative and not have to answer to anybody outside of our friends and family if they don't want to," she said.

Aside from raising her two kids, Philipps also keeps herself busy as an actress and podcast host.

Here's everything we know about Busy Philipps' private life.

Busy Philipps' teenage years and having an abortion at 15.

In 2019, Philipps opened up about the time she had an abortion when she was just 15 years old.

The actress spoke about the experience during a segment on her talk show Busy Tonight, in response to anti-abortion legislation in America.

"I had an abortion when I was 15 years old and I’m telling you this because I’m genuinely really scared for women and girls all over the country," she said.

She explained that "being a f***ing woman" means "having a regular Tuesday and then suddenly being reminded that people are trying to police your body. And then you just have to go back to work".

Philipps, who first spoke about her abortion in her 2018 memoir, This Will Only Hurt a Little, later started a social media movement encouraging women who have terminated their pregnancies to share their stories via the hashtag #YouKnowMe.

I spoke about my abortion on my show tonight because I can not sit idly by while women’s rights are stripped away. https://t.co/Vk4kh4ZBJq

It wasn't the first time, Philipps had been open about her teenage years.

In 2018, the actress shared that she was sexually assaulted when she was just 14 years old.

"This is me at 14. The age I was raped. It’s taken me 25 years to say those words," she wrote on Instagram, alongside an old school photo.

"I wrote about it in my book. I finally told my parents and sister about it four months ago. Today is the day we are silent no more. All of us. I’m scared to post this."

Philipps also wrote about her sexual assault in her memoir, where she detailed her experience in the eighth grade with a boy who was three years her senior.

In 2001, Philipps joined the cast of beloved 90s teen drama, Dawson’s Creek, when she landed the role of Audrey Liddell.

But behind the scenes, the young actress had a hard time connecting with her co-star, Katie Holmes.

"Katie was very sweet, but we didn’t spend that much time together. I knew she worked out a lot," she wrote in her memoir. "She didn’t seem to like to drink very much, and while I knew she’d sneak a cigarette every once in a while, she wasn’t really like a hang-out-and-smoke kind of girl."

But while she may not have been close with Holmes, Philipps made a lasting friendship with her other castmate, Michelle Williams.

"It was like, you know, how people say love at first sight? We had that thing. We had that friend connection. It was just an immediate," Philipps told Entertainment Weekly in 2018.

"Of course we're drinking wine and smoking cigarettes and getting in bar fights. We just had an immediate love for each other that's continued over the years."

Williams also spoke about her friendship with Philipps, saying, "When I met her, she was the coolest girl I had ever seen".

"She had a nose ring. She wore her hair in braids. She wore overalls. And she had this attitude like, 'I know who I am and don’t cross my line'. I just thought, 'I want to be this person when I grow up'. She was my first real friend I ever had."

The pair have been inseparable ever since.

Becoming the host of her own late-night talk show.

After Dawson's Creek, Philipps went on to star in the hit 2004 film White Chicks before landing the role Laurie Keller in Cougar Town in 2009.

The 41-year-old eventually became the host of her own talk show, Busy Tonight in 2018. At the time, Philipps joined Samantha Bee as one of the only female hosts on late-night TV.

Sadly, a year later, she announced her show was being cancelled after just one season.

"Here’s the thing, you guys. My show, Busy Tonight, is not going to continue on E! after May 16. They decided not to pick it up," she wrote on her Instagram stories at the time.

She added it was "lame" that there would "just be one woman in late night at a time".

"I feel like we’ve been able to accomplish so much creatively and, I guess, culturally, and I think that we’ve had a real point of view. And I’m so proud of all of the things that we’ve done, that we’ve been able to do, and I feel the show is really successful in that way, but, you know . . . I don’t know what to say."

A year later, she launched her podcast Busy Philipps Is Doing Her Best in 2020.

Outside of acting and hosting a podcast, Philipps is busy raising her two kids with her husband Marc Silverstein.

The 41-year-old spoke about quarantining with her husband and their kids during an interview with US Weekly in May last year.

"It’s the worst. I mean, I obviously couldn’t do it without him, but ugh," she said about her husband. "Listen, it’s been a process — like everything — but we have been making a point to make sure... that the other one gets time to themselves."

She also explained that the couple try to prioritise date night.

"We’ve been making it a point, recently especially, to have really nice dinners together. He’s been cooking."

"I am very, very lucky. He’s like a gourmet chef. It’s totally nuts, the kind of stuff he is able to whip up in this quarantine time. So he’s been making these really beautiful dinners for us. Then he’ll bring it up to the balcony and we’ll eat out there together and have some nice time."