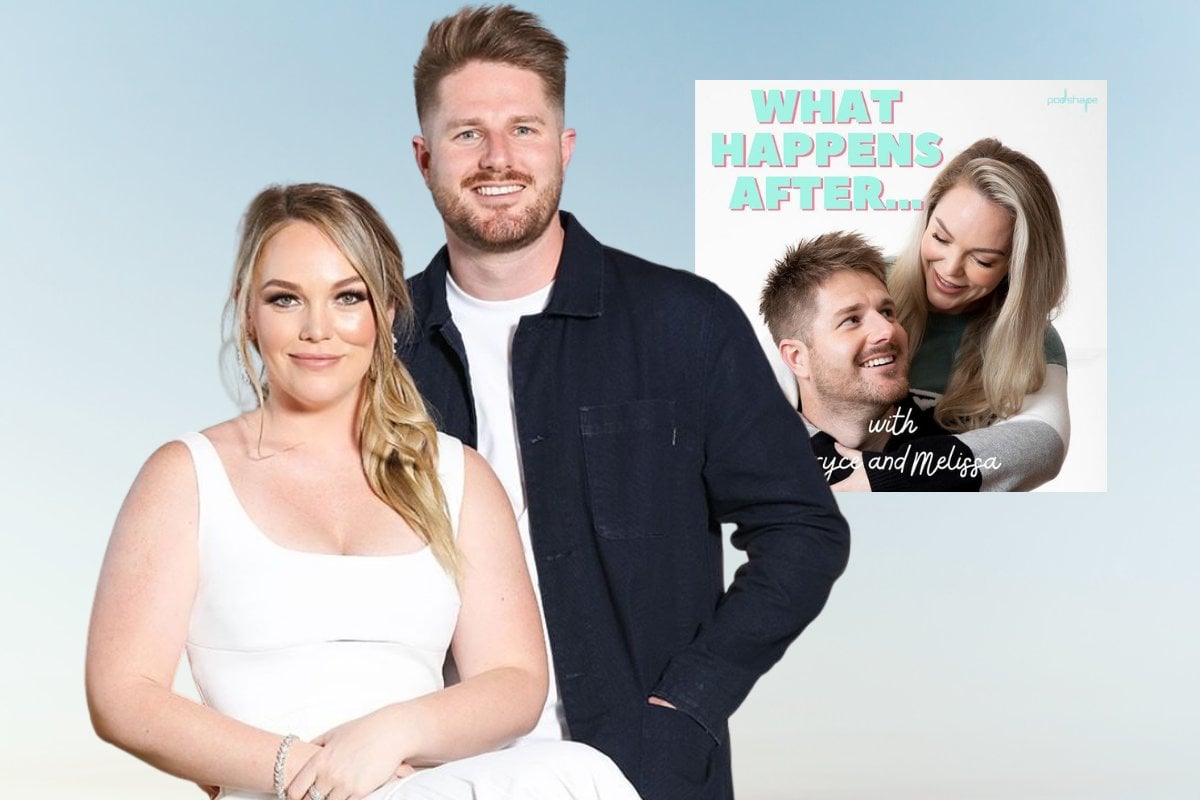 When news broke that Bryce and Melissa were releasing a podcast, the response was... well... lacking love.

And with good reason. Australians had just witnessed the mayhem that was the latest season of Married At First Sight - where a big bulk of the drama surrounded Bryce and his treatment of his wife, Melissa.

In fact, Mamamia alone published not one, not two, but SIX opinion pieces on Bryce's questionable actions on MAFS.

Watch the moment Melissa and Bryce get some harsh feedback from their parents on Married At First Sight. Post continues after video.

But because we're in the business of being across all news - good, bad and trashy - we of course had to listen to the first episode of What Happens After to see if the couple discussed, justified or just flat out ignored what happened on Married At First Sight.

"We want to show you the full relationship, warts and all," stated Bryce before Melissa candidly shared: "Plenty of warts in this relationship."

So let's go through the aforementioned warts. One by one.

Bryce signed up for MAFS a mere five days after breaking up with his fiancée.

The application process for MAFS was very different for Bryce and Melissa, with Melissa admitting that she started and then gave up on applying to the show.

"I got a quarter of the way through the application - because there were so many questions - and I left it at that. About a month later I got a text message from a producer, and that's where it started. The whole process took about six months."

"You always hear about people getting approached for these shows, and, yeah, I was one of those people," says the ex-radio announcer.

He also went on to explain just how long it had been since his engagement fell apart and him signing up for MAFS.

"There's no secret that I was previously engaged up until just after Easter last year - just over a year ago. And yeah, I'd been watching the show for the last couple of seasons and had known people who had done the show and heard various pieces of feedback. I ended up getting a phone call out of the blue one day from one of the producers. I'm not sure how they got my phone number - maybe through a social media avenue like LinkedIn? I was doing some Instagram Live stuff with contestants from last year too."

"The phone call came five days after breaking up with the ex," he added.

While Melissa jumped in to exclaim, "Whoa! That's a quick turnaround!", Bryce was quick to defend his actions, saying: "I've made it no secret that I had emotionally checked out of that relationship. So as far as I was concerned, when I had ended the engagement I was free as could be. I had myself to worry about, and we were still living together at the time, but we were in separate rooms and trying to end things as amicably as possible."

Despite the car crash we saw on Married At First Sight, where Bryce not only made zero friends, but actually gained around 20 enemies on the show - and a nation of 'haters' across Australia - Bryce is apparently "really good" at making buddies.

Due to his "transient" lifestyle as a radio announcer, he claims he's learnt to quickly make friends and now has a huge bunch of pals.

Melissa confirmed this by saying, "I'm always seeing your phone blowing up with new people". Which, to be honest, makes us nervous because of that whole secret girlfriend dilemma...

Listen to this episode of The Spill, Mamamia's pop culture podcast, where hosts Kee and Laura discuss the not-so-happy ending of MAFS. Post continues after podcast.

That being said, Bryce has also lost A LOT of friends because of the show.

While he's really good at making friends, Bryce admits that he's lost a lot of connections because of the show. He also claimed that a fair few pals have tried to 'use' his platform and have shared things with the media to "get a leg up wherever they can".

"It's been quite evident where I've had people I thought were my friends get involved with gossip pages and media outlets to try and make a name for themselves."

Melissa attempted to justify Bryce's ex-friend's actions, saying: "They may have seen elements of you that they didn't like, and that's why you've had a falling out."

Bryce still has a 'type' of girl that he's attracted to. So, no growth there.

"It's no surprise to anyone that I have a certain 'type'. The beachy, blonde type," Bryce shares on the podcast.

But he goes on to admit that while he was single (yes, those five days between his engagement ending and signing up to the show) he had a 'proper think' and realised that obviously this 'type' wasn't really working for him.

Melissa, at this point in the podcast, calls out Bryce and says, "The blonde hair, blue eyes thing is very judgemental". YEAH GIRL. "A specific colour of eyes does not make a person."

When it was brought up if she would ever wear blue contact lenses, Melissa plainly said: "Absolutely not."

Melissa explains why she tapped out of media interviews for a month.

Married At First Sight fans were quick to notice that Melissa was decidedly absent from a lot of the promotional interviews that happen during the show's airing. While many assumed that perhaps the couple had broken up, Melissa set the record straight during the podcast, sharing that her mental health had taken a tumble.

"It was a really difficult time from when the show aired to when it ended. There was a period of three weeks where I really struggled with my mental health. I didn't want to communicate with anybody. At all. Not even my own family and friends.

"I get that I put myself out there. I put myself on national television. I was made aware of the consequences and the changes that would happen - so there are no negative associations with that. But with my type of personality, I definitely did struggle with my emotions.

"I've had mental health issues in the past. I've struggled with depression and anxiety from quite a young age. It was definitely documented throughout my process of applying for the show. And I was supported, but I had some very dark days.

"There were days when I couldn't get off the couch. I didn't want to get dressed. I couldn't work. I barely ate. My sleep was all over the place. It has taken a bit of time to get back to where I want to be mentally, and [Bryce] you've been a great support, but nothing could have prepared me for that."

While Melissa credited Bryce with supporting her, he awkwardly admitted that he found it tough to deal with and looking after his MAFS wife took a toll on him too.

"I've never been with someone who's visibly struggled in front of me. Watching you go through it, I was very concerned for your mental health. And helping you get through it wore me down as well."

Listen to this episode of The Spill about the most dangerous moment on MAFS. Post continues after podcast.

Getting their social media accounts back was rather confronting.

When they got control of their Instagram accounts back (as producers manage their social media while they're on the show), Bryce was expecting a whole heap of hate from his new followers. However, he was happy to report that it's only 20 per cent bad.

"80 per cent of people are nice and friendly and can see through everything that was shown on the show, and the other 20 per cent have their own opinions - and they're entitled to those."

That being said, Melissa flagged that they have received death threats over social media - and it's made them question bringing a child into a world where that happens regularly.

"I am terrified to think they would have to deal with this body-shaming and hating. I would want to shield them from all of that," Melissa shares.

What's next for Melissa and Bryce's podcast?

Bryce and Melissa teased what would be coming up on future episodes, and it looks like their parents will be appearing on the show, along with some of their MAFS friends. Melissa then said she's excited to share what it's like to live with Bryce - to which Bryce said he has a recording of them in bed, which he "can't wait to share".