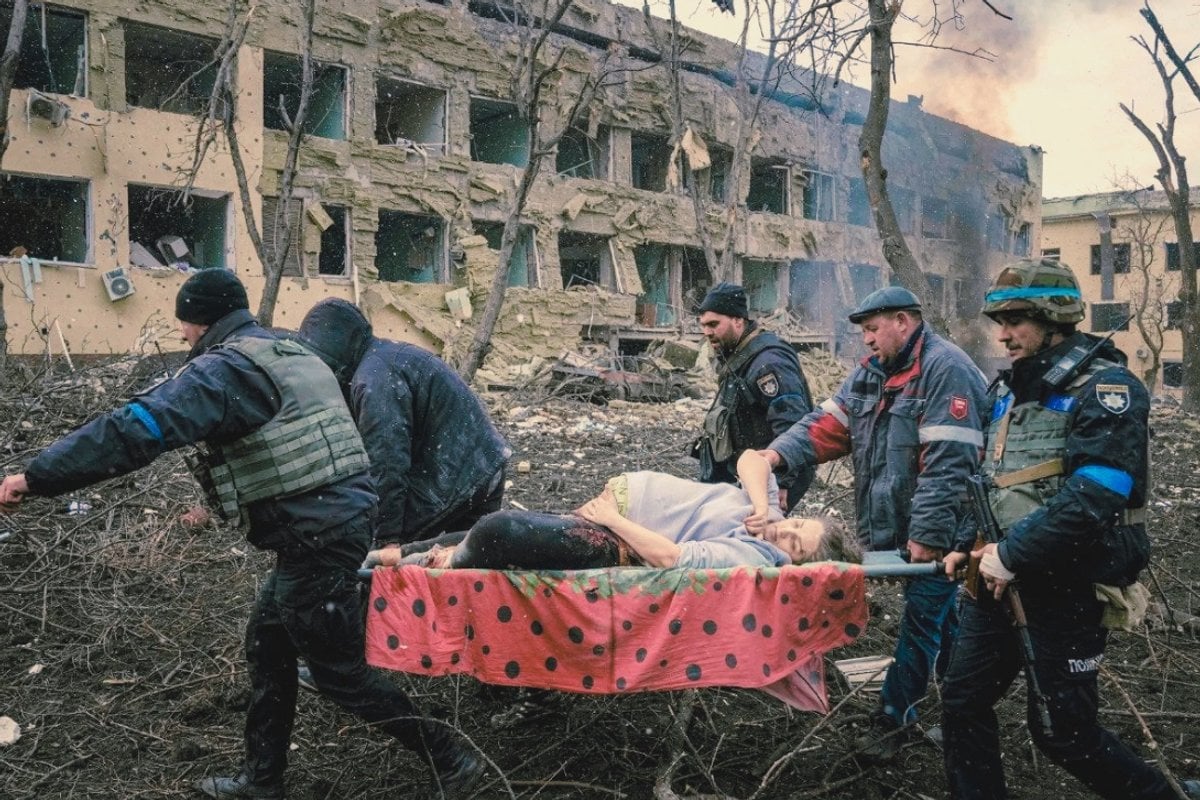 This article discusses infant loss and distressing topics that could be triggering for some readers.

The photograph will be seared into my mind forever:

A young woman lay atop a stretcher, her arm clutching at her swollen pregnant belly. Her pants are stained with blood and she stares blankly into the sky above. Four men carry her through the rubble where the Russian bombs detonated. The earth is blackened, covered with bare branches and twigs. Smoke billows in the background against the building which has now been reduced to a shell of post-it notes.

The building that was once Maternity Hospital No 3 in Mariupol, Ukraine.

The women victims of the bombed maternity hospital in Mariupol, Ukraine. Post continues after video.

They were the words the woman reportedly cried out to medics as she realised she was losing her baby. She was crashing. Her pelvis was crushed and her hip detached. Once reaching another hospital, her baby was delivered by caesarean section. Doctors then fought for over 30 minutes to resuscitate her.

Tragically, both mother and her baby lost their lives.

As I read the account, and saw the photograph and footage, I felt my stomach wrench and contort.

And in the film footage of her being stretchered from the apocalyptic site, I saw her hands; her french manicured fingers. So familiar. The same style I often wear on my own nails.

She looked around my age too.

"She" because we don't know her name.

Because in the midst of the mayhem, medics didn't have the chance to record it.

But "she" does not – cannot – encapsulate a life.

The life of a daughter and wife; This we know, because her husband and father collected her before she was buried in one of the mass graves for the dead of Mariupol.

"She" was no doubt a friend and colleague too.

"She" was a whole person, who almost certainly laughed and cried, who had hopes and a most-loved song; fears and a favourite meal, and quirks and regrets and dislikes.

Instead, “she” is remembered in her basest final moments. In one dimension. A victim of barbarity.

War steals more than lives; it dehumanises, devastates, pilfers identity, and stories, and leaves chairs forever empty around the dinner tables of families.

And when captured in a lens, that victim – that person – is catapulted from the realm of private to public: A symbol of war, an iconic photograph memorialised into the annals of history, and etched into collective memory.

But “she” was an individual. Someone’s entire world… and just one of many “entire worlds” that have been lost to the depravity of Russia’s war on Ukraine.

Listen to The Quicky: What will it take to end the war in Ukraine? Post continues after audio.

And how many more unknown names will be killed or maimed or uprooted tomorrow?

And next week? And next month?

Ironically, it was the Russian revolutionary Vladimir Lenin who said, "The lens can write history quite well. It's clearer and more understandable… There isn't a single artist who can come close to touching what a camera can see.”

And yes, we see very clearly.

And we understand too.