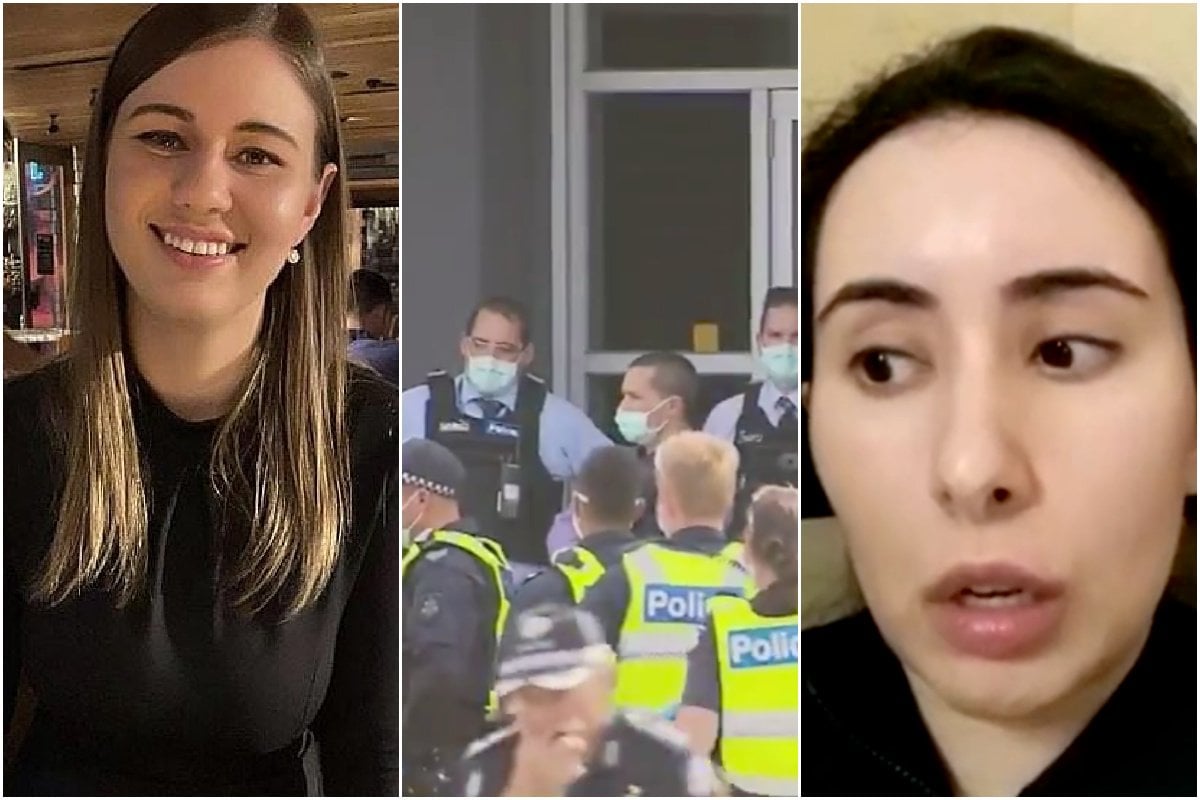 Brittany, a former Liberal Party staffer, alleges she was raped by a colleague inside Parliament House in 2019 when she was 24 years old.

The inquiry findings, reported by Samantha Maiden for news.com.au also discovered that security officers returned to the office to "determine what happened to the woman" and "found Ms Higgins disorientated and half-naked in the Defence Minister's office."

The former director of security operations at Parliament House quit his job in the wake of “tragic” alleged rape of Brittany Higgins after raising concerns over how the matter was handled. He won’t comment but says he’s happy to cooperate with any inquiry https://t.co/qT9HkBs9YR

Instead of discussing what might have happened in the room, there were discussions about whether the office should be cleaned before people returned to work on Monday.

Peter Butler, a former sworn New South Wales Special Constable, and former director of security operations at Parliament House says he quit his job after raising concerns over how the matter was handled.

"No woman should have to go through what she has been through," Senator Reynolds told parliament.

"That trauma that comes not just in the immediate aftermath of an assault, but in the many months and the many long years that follow it is what those of us in this building failed to acknowledge."

Senator Reynolds said she deeply regretted calling a meeting with Ms Higgins in the place of the alleged attack.

#Auspol THREAD: Just saw Brittany Higgins’ extraordinary interview w @Lisa_Wilkinson. Wanted to put some things on the record. 1. Of the many women politicians we called for @4Corners Inside the Canberra Bubble, only one who refused to speak & hung up phone was Linda Reynolds.

"At the time, I truly believed that I and my chief of staff were doing everything we could to support that young woman who I had responsibility for," she said.

"At all times, my intent and my aim was to empower Brittany and let her determine the course of her own situation, not by me, not by my staff, not by the government as a whole, but by Brittany."

The minister refused to say whether she had ongoing contact with the alleged perpetrator after the incident.

Senator Reynolds said his employment was terminated for a "security breach" and she could not recall any contact with him since.

While she has been aware of the incident nearly two years, the Prime Minister's office said it only found out on February 12 and has since announced two reviews aimed at improving workplace culture and handling of complaints.

However, Morrison's response to the entire incident is being questioned.

ACTU president Michele O'Neil is among those critical of Mr Morrison for explaining his response to the allegations from the perspective of a "father with daughters".

This 👇 was my question to @ScottMorrisonMP (& his answer) following the remark his wife Jenny told him to think about what he would want for their daughters if they were in Brittany Higgins' position. @10NewsFirst @Studio10au #auspol pic.twitter.com/wHvX9K2VhU

"For the prime minister to say that a worker needs to have a boss who has a daughter to be safe at work is unacceptable," Ms O'Neil said.

Victoria has recorded a day without new locally-acquired COVID-19 cases, putting the state in a good position to exit lockdown.

A meeting of government officials is currently underway to decide whether to lift Victoria's snap five-day lockdown as planned on Wednesday.

All the new cases recorded over the past days have been linked back to the Holiday Inn outbreak, with no mystery cases, giving authorities confidence the state had stemmed the spread.

The state's third lockdown was initially imposed until midnight on Wednesday, after the highly-infectious UK strain of the virus escaped from a quarantine hotel.

But Premier Daniel Andrews warned on Tuesday that it was unlikely the state would return to the old rules immediately.

Dozens of police have stormed a gym in Melbourne's north, arresting three men, after officers arrived to find the business operating as normal.

"We can't afford to close the gym so we've been trading as per normal during the lockdown," Al Pope, part-owner of the gym told 9News.

Police have flexed their muscles at a gym in Melbourne's north, allowing customers to pump some iron, despite the lockdown. @Elisabeth_Moss9 #COVID19 #9News

175 people, plus members, trained on Tuesday and no masks were worn.

The national employer association has called for an end to the uncertainty.

"Businesses cannot flick on and off, and despite the positive signs and signals from the government, there remains uncertainty and confusion," the chief executive of Ai Group Innes Willox said.

A daughter of Dubai's Sheikh Mohammed bin Rashid Al Maktoum, who tried to flee the country in 2018 is being held in a "jail villa" apparently located in a UAE skyscraper.

While trying to escape, Sheikha Latifa bint Mohammed Al Maktoum was detained in a boat off India.

In new videos obtained by the BBC and released on Tuesday, Sheikha Latifa says "I'm a hostage. I can't even go outside to get any fresh air."

In 2019, Latifa began to send secret messages to her friends, via a smuggled phone

She described being held, against her will

The UAE has previously said Latifa is "safe in the loving care of her family"#MissingPrincesshttps://t.co/WCWIJKcqLd pic.twitter.com/ngyi4nbnTO

"I don't know when I'll be released and what the conditions will be like when I'm released," she says. "Every day I am worried about my safety and my life."

She describes all of the windows being barred shut, with five policeman stationed outside and two policewomen inside.

"I don't really know if I'm going to survive this situation," she tells the secret recordings.

The UAE has previously said Latifa is "safe in the loving care of her family".

The Queensland government is backing a private outback quarantine camp, but it wants to the federal government to help pay staff.

The Wagner Group wants to build a quarantine facility which would host up to 1000 travellers and 300 staff at Wellcamp Airport near Toowoomba.

The state supports the project, which could be up and running within 14 weeks, as it will reduce the risk of COVID-19 outbreaks in cities.

As the federal government negotiates a third expansion of Darwin’s Howard Springs facility, a Queensland plan could be paid for by private owners. https://t.co/MCrhjRS6yH

Deputy Premier Steven Miles says the state is now waiting for the federal government to respond to the proposal.

A purpose-built facility would also have proper ventilation, unlike city hotels, which will avoid the "corridor effect" of the virus spreading via common areas.

Premier Annastacia Palaszczuk warned earlier on Tuesday that the risk of the virus getting out of hotel quarantine could remain for months if nothing changes.

Alternatives to the "populist view" of criminal justice that relies on harsh penalties and long sentences will be explored when the disability royal commission continues in Brisbane on Wednesday.

Commissioners were told the story of 'Melanie', an Indigenous woman with an intellectual disability who was regularly kept in isolation for 23 hours a day and gave evidence using a pseudonym.

"The feeling that I had visiting those seclusion rooms was one that I will never forget and will never leave me," NSW Public Guardian Megan Osborne said on Tuesday.

An Indigenous woman with an intellectual disability was regularly kept in isolation for 23 hours a day and could have her freedom limited further depending on behaviour, a royal commission has been told.https://t.co/mEnNGPw8AT

"I felt quite anxious and overwhelmed and knew that I wouldn't do very well if I had to spend any period of time in those rooms."

Melanie lived in the isolated environment "almost constantly" after being transferred from prison to a forensic hospital.

She is now out of the seclusion unit and living in a room on a sub-acute ward.

The eight-day hearing will include evidence from 33 witnesses as it examines indefinite detention and the "cycling in and out" of the criminal justice system by people with disability.

Western Australia's government has blamed activists for putting up homeless people in a Perth hotel, declaring it will not pay the bill despite earlier promising to accommodate rough sleepers from a dismantled tent city.

The owners of Perth City Apartment Hotel say the standoff has left them with no choice but to ask more than a dozen homeless guests - including young families, pregnant mothers and a woman who gave birth last week - to leave.

In a statement, co-owner Eddie Kamil said he had been waiting more than three weeks for payment.

But Premier Mark McGowan on Tuesday said the bookings had been made by "activists" and not the government.

WA's Department of Communities also issued a statement claiming the bookings had been "supported" by homelessness advocate Jesse Noakes.

Mr Noakes has denied booking anyone into the hotel.

Djokovic battles on through injury, as Ash Barty plays for a place in the final.

Novak Djokovic says he is facing the greatest injury challenge of his grand slam career after securing a place in his ninth Australian Open semi-final.

Djokovic has not been training in between matches as he attempts to recover from an abdominal strain.

"I have had a rollercoaster tournament," the 33-year-old said.

Novak Djokovic’s pursuit of a record ninth Australian Open crown is in doubt after the world No.1 battled through an abdominal injury to creep into the second week at Melbourne Park | @scottspits https://t.co/wrIeXJ2sFG

"I have never experienced this kind of injury during a grand slam and (been able to) keep going.

"The positive thing is that I actually felt the best from the beginning of the second set until the end of the match that I have since when the injury happened."

She is just two wins away from a place in Saturday's final.

- Myanmar's military junta has promised that it will hold an election and hand over power as police filed an additional charge against toppled former leader Aung San Suu Kyi.

It also defended its February 1 seizure of power, denying it was a coup even as protesters took to the streets again in support of Suu Kyi and other arrested leaders and the Chinese government dismissed social media rumours that it had helped with the military's action.

- The West African nation of Guinea has recorded up to 10 suspected cases of Ebola and five people have died since the start of a new outbreak.

- A bus has crashed into a canal in central India, killing at least 35 people.

- Palaeontologists have unveiled the oldest skink fossil ever found in Australia, a 25-million-year-old specimen that is the ancestor of the bluetongue lizard.