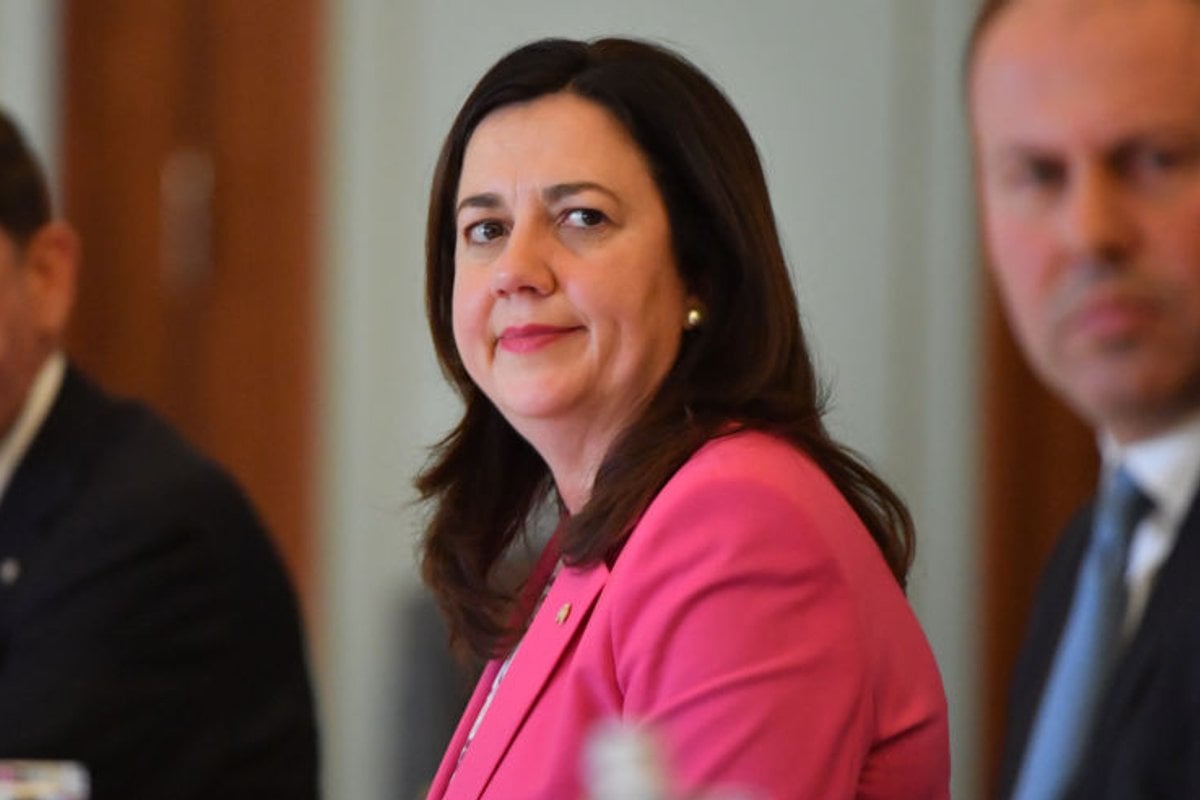 People in Brisbane who were set to arrive in Victoria this weekend have been told they will not be able to enter the state, with border closures enacted from midnight.

Late last night, the Victorian government announced border closures to anyone who had been in the Greater Brisbane area on or after January 2.

People who have already arrived in Victoria are required to get tested and isolate until at least 6pm Monday.

Victorians currently in Queensland who have visited, been in or travelled through Greater Brisbane must follow the advice of Queensland Health: https://t.co/XmRZTGbDpP

"It is different to a normal definition we'd apply to hotspots, but you've got to change the rules when there is new information and new uncertainties being introduced," Prime Minister Scott Morrison said.

The Queensland government ordered the Greater Brisbane area into a three-day lockdown, effective from 6pm yesterday, to get a head-start on contact tracing.

The Prime Minister supported Queensland Premier, Annastacia Palaczszuk's response, saying he believed it was "proportionate" given the risk of spread from the UK strain.

Greater Brisbane has recorded zero locally acquired cases of COVID-19 on the second day of their greater Brisbane lockdown, after 19,000 people came forward for testing.

Brisbane residents have spent their first night of three confined at home as Queensland battles to contain the more transmissible UK variant of COVID-19.

They face a nervous wait after a cleaner at one of Brisbane's quarantine hotels was diagnosed with the highly-infectious mutant strain of coronavirus.

Authorities fear the cleaner, a woman aged in her 20s, had been infected and active in the community since January 2.

Residents in the council areas of Brisbane, Logan, Ipswich, Moreton Bay and Redlands must stay at home until 6pm on Monday, except for essential work, exercise, essential shopping and to access healthcare or to look after the vulnerable.

The three-day lockdown prompted panic buying on Friday as massive crowds flocked to supermarkets stripping shelves of toiletries, perishables and canned goods with lines stretching for hundreds of metres at some stores. 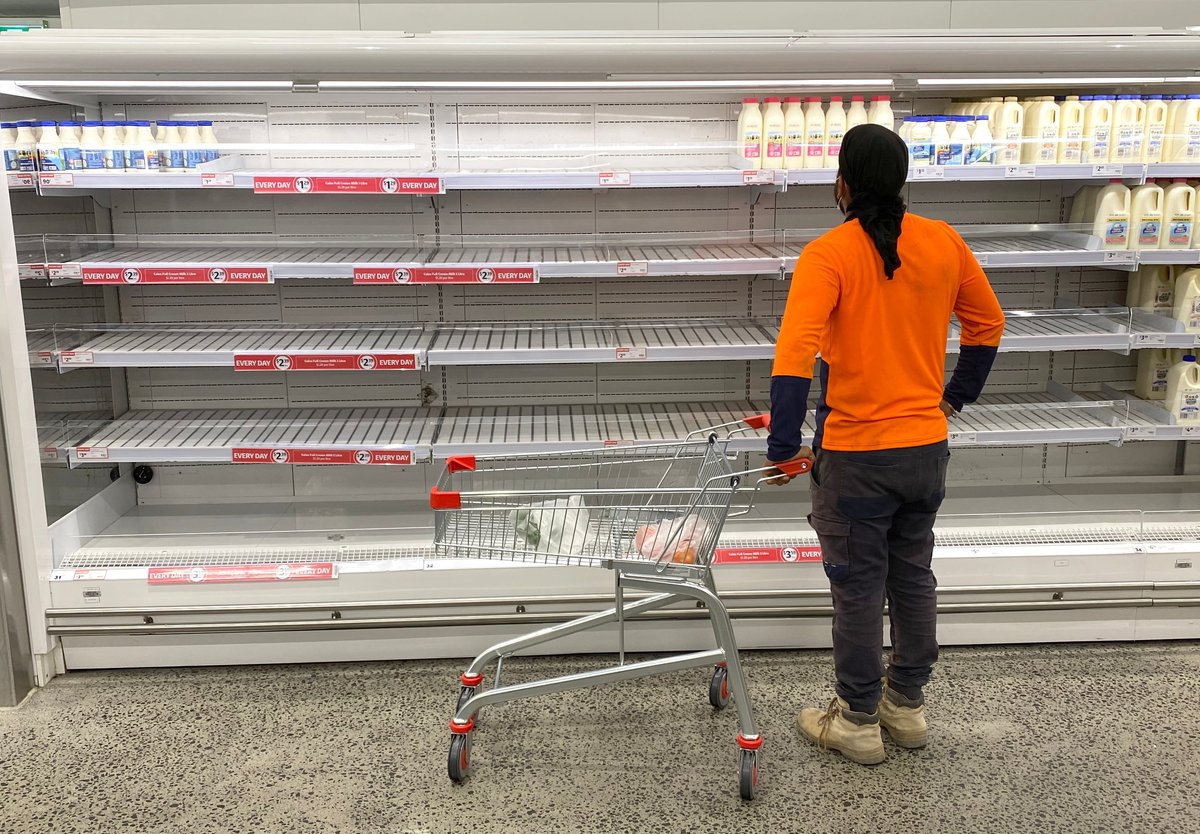 Masks also will be mandatory for people leaving home aside from children under 12 for the first time in Queensland.

Meanwhile, as the southeast grapples with the tight new restrictions, fragments of COVID-19 have been detected in sewage at four more sites in Queensland.

"This does not mean we have new cases of COVID-19 in these communities, but we are treating these detections with absolute caution," Queensland Chief Health Officer Jeannette Young said.

"A positive sewage result means that someone who has been infected was shedding the virus. Infected people can shed viral fragments, and that shedding can happen for several weeks after the person is no longer infectious."

"It moves so quickly, far more quickly than previous strains of the virus," Mr Morrison said on Friday.

"We know there is only one case, but ...this new strain is some 70 per cent more transmissible than the previous strains of the virus.

"This strain is likely to become in the very near future, the dominant strain, as it largely already is in the UK, but we anticipate that this will become the more dominant strain of the virus globally."

Anyone with any symptoms is urged to undergo testing and self-isolate.

The Queen and Prince Philip have received their COVID-19 vaccinations, joining more than a million people who have been given the jab in the UK.

In an unusual move, Buckingham Palace, which rarely comments on the private health matters of the monarch, announced on Saturday that the Queen and her consort had been given the injection. 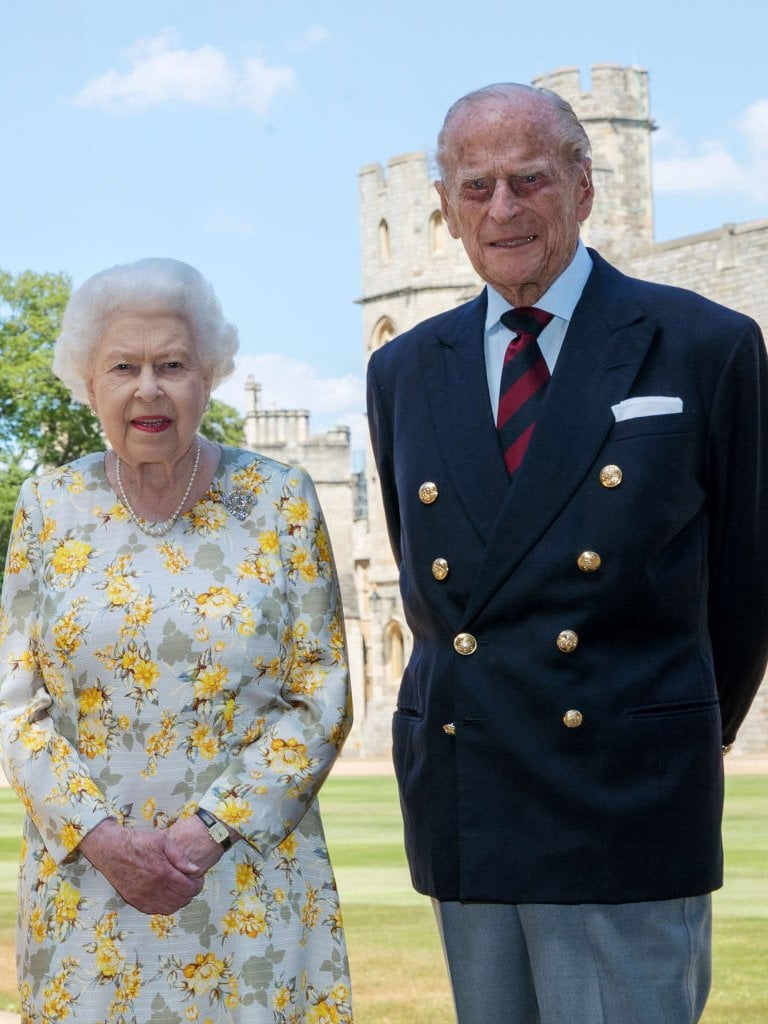 It is understood the Queen, 94, decided the information should be made public to prevent inaccuracies and further speculation.

"The Queen and the Duke of Edinburgh have today received COVID-19 vaccinations," a Buckingham Palace spokesman said.

A royal source confirmed the injections were administered by a royal household doctor at Windsor Castle.
Queen Elizabeth II and Phillip have been spending the lockdown in England sheltering at their Windsor Castle home.

They decided to have a quiet Christmas at their Berkshire residence, and forgo the traditional royal family gathering at Sandringham.

The Queen and Prince join a multitude of public officials who have also openly shared that they've been vaccinated.

Others, including President-elect Joe Biden and Vice President Mike Pence, took their first doses on television so as to increase public trust in the science.

Many reacted with hesitation after vaccines began to pop up due to the quick turnaround in testing, but leading experts ensure the studies were conducted properly.

Coronavirus cases have been soaring in recent weeks in the UK, where the virus has killed more than 79,000 people.

Record COVID-19 deaths in the US amid violence.

The US has registered more COVID-19 deaths in a single day than ever before - nearly 3,900 - on the very day the mob attack on the Capitol laid bare some of the same, deep political divisions that have hampered the battle against the pandemic. 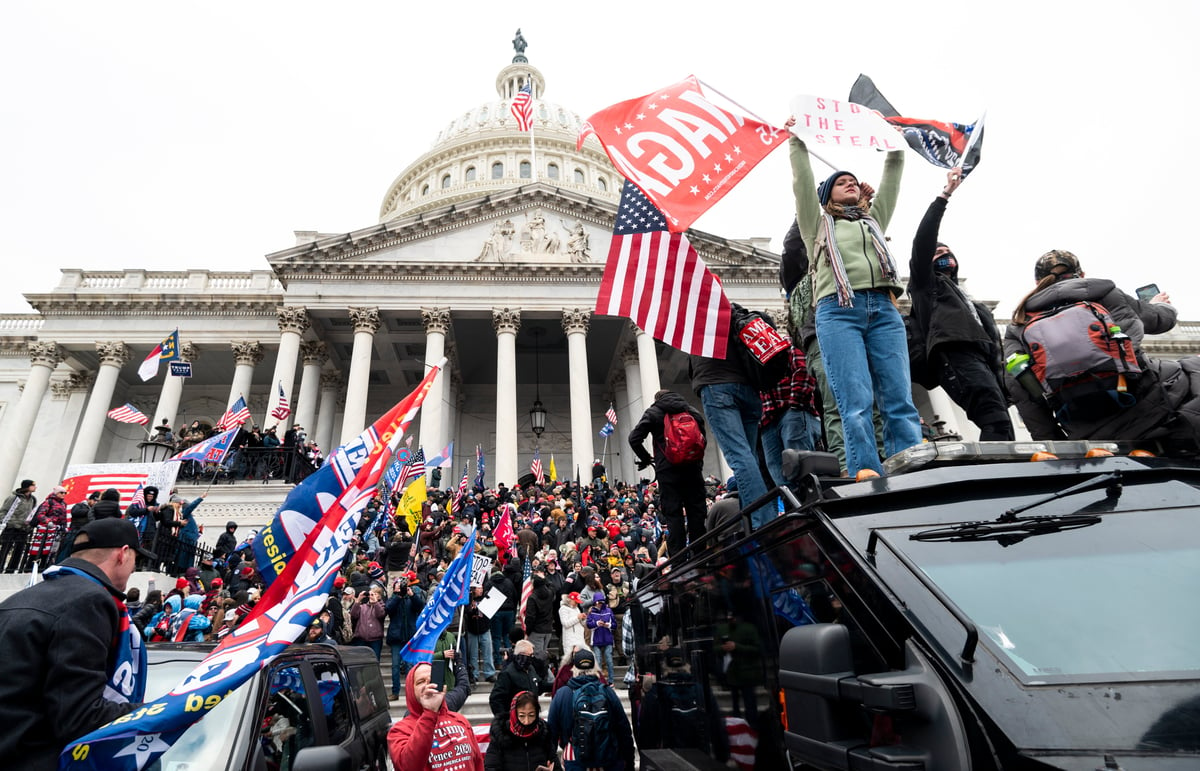 The virus is surging in several states, with California hit particularly hard, reporting on Thursday a record two-day total of 1,042 coronavirus deaths. Skyrocketing caseloads there are threatening to force hospitals to ration care and essentially decide who lives and who dies.

"Folks are gasping for breath. Folks look like they're drowning when they are in bed right in front of us," said Dr. Jeffrey Chien, an emergency room physician at Santa Clara Valley Regional Medical Center, urging people to do their part to help slow the spread.

"I'm begging everyone to help us out because we aren't the front line. We're the last line."

About 1.9 million people around the world have died of the coronavirus, more than 360,000 in the US alone. 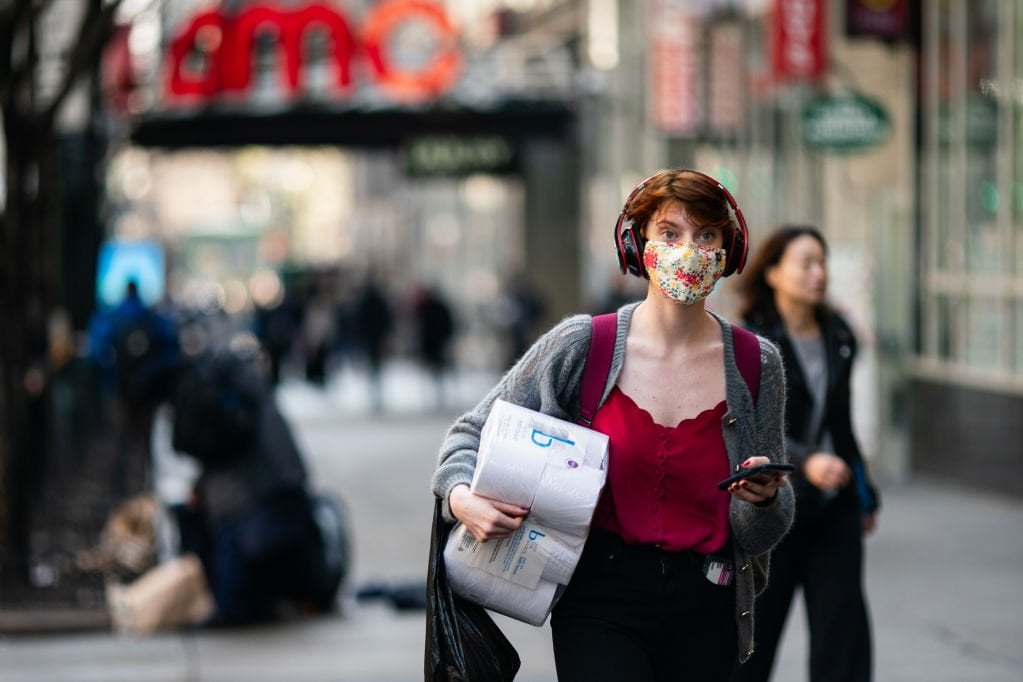 December was by far the nation's deadliest month yet, and health experts are warning that January could be more terrible still because of family gatherings and travel over the holidays.

A new, more contagious variant of the virus is spreading around the globe and in the US. Also, it remains to be seen what effect the thousands of supporters of President Donald Trump who converged this week in Washington, many of them without masks, will have on the spread of the scourge.

Trump has long downplayed the virus and scorned masks, and many of his ardent supporters have followed his example. He has also raged against lockdowns and egged on protesters objecting to restrictions in states such as Michigan, where armed supporters invaded the statehouse last spring.

On Wednesday, the day a horde of protesters breached the US Capitol and disrupted efforts to certify the election of Joe Biden, the US recorded 3,865 virus deaths according to Johns Hopkins University.

The numbers can fluctuate dramatically after holidays and weekends, and the figure is subject to revision.
"The domestic terrorists overran the Capitol police, just as the virus has been allowed to overrun Americans," said Dr. Eric Topol, head of the Scripps Research Translational Institute. "The US lost control of a Trump-incited mob and a Trump-played-down pandemic virus."

In California, health authorities Thursday reported 583 new deaths, a day after 459 people died. The overall death toll there stands at more than 28,000.

The state also registered more than a quarter-million new weekly cases, and only Arizona tops California in cases per resident. Florida broke its record for the highest single-day number of cases with over 19,800, while its death toll reached 22,400.

Los Angeles County, the nation's most populous with 10 million residents, and nearly two dozen other counties have essentially run out of intensive care unit beds for COVID-19 patients.

As of Thursday, the Centers for Disease Control and Prevention reported that 5.3 million people in the US had gotten their first shot of the COVID-19 vaccine - well short of the hundreds of millions of Americans who will need to be vaccinated to stop the virus.

Victoria has recorded a fourth consecutive day without a locally acquired COVID-19 case.

Six cases were uncovered in the state's hotel quarantine system.

The streak has Premier Dan Andrews upbeat in the belief contact tracers are winning the fight against the 27-case outbreak linked to a Thai eatery in Melbourne.

There were 6 cases notified to the department in the past 24 hours. This includes 0 locally acquired and 6 in hotel quarantine. There are currently 45 active cases. 23,412 test results were received – thanks, #EveryTestHelpshttps://t.co/lIUrl0ZEco#COVID19VicData pic.twitter.com/VXfCUZIt7T

There are currently 45 active cases in Victoria, all contained in isolation.