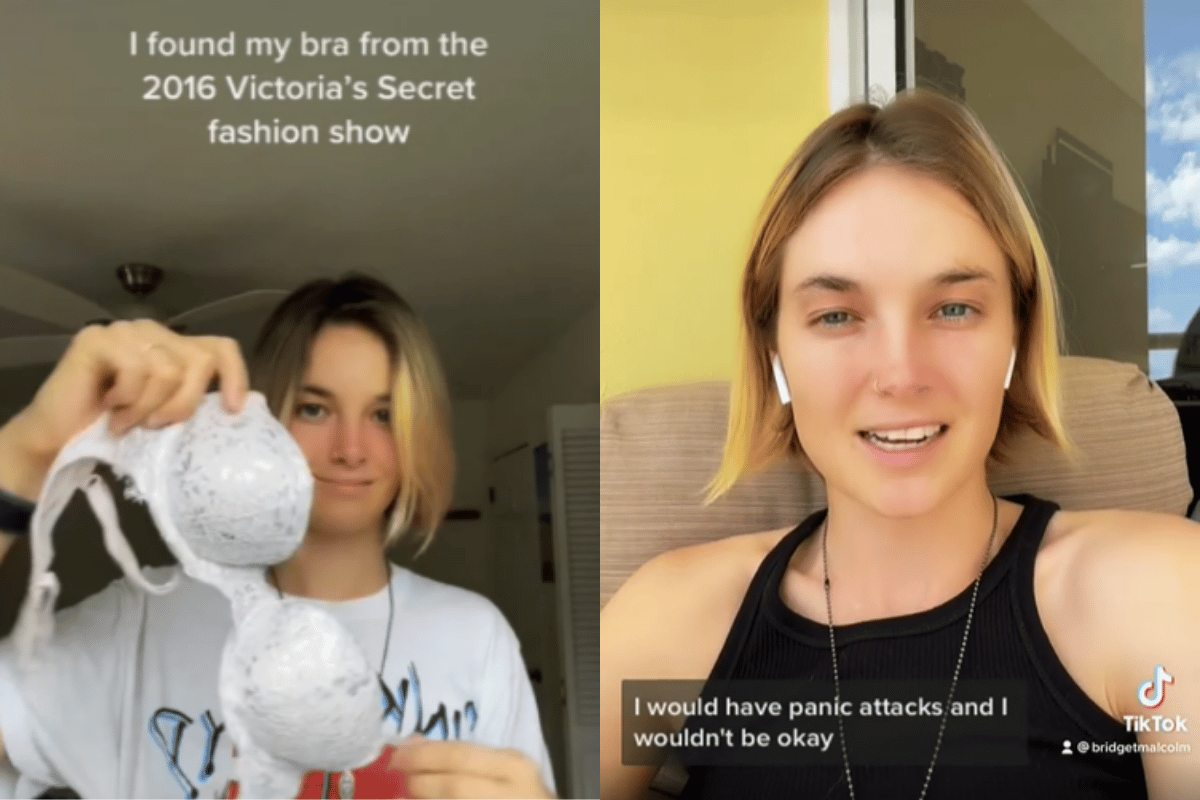 Warning: This post mentions sexual assault, suicide and eating disorders. It may be triggering for some readers.

In 2016, Aussie model Bridget Malcolm stepped out onto the Victoria's Secret runway in Paris.

Now looking back at photos from the show, she's recalled the distinct "sadness" she felt at the time.

The 29-year-old, who has been open about her "eating disorder and chronic anxiety" in the past, recently shared a TikTok video explaining the truth behind the runway appearance.

In the video, which has been seen over two million times, Bridget tries on the very bra she wore on the runway to show just how much her body has changed.

"Look how big it was on me, the sadness behind my eyes from the 2016 show breaks my heart," she continued.

Bridget went on to claim that she was rejected from the Victoria’s Secret Show a year later and told her body "did not look good enough".

In another video where she continues to chronicle "the times the fashion industry has sucked", Bridget spoke about the pressure she felt from the industry and her agency to lose weight.

She went on to explain that she went to see a chiropractor/nutritionist in New York City to help her.

"At my most I probably walked in there about 145 pounds and he looked at me and said, 'Bridget, even for a normal girl you are fat'. And I remember thinking, I'm pretty sure you're wrong but I felt so much pressure from everyone around me, from the industry, from my agency and I was like ok whatever I need to do to lose weight, please I'll do it."

Bridget who's also appeared in Playboy and Harper’s Bazaar, said the diet she later went on ended up leaving her digestive system "destroyed".

"Moral of the story, your body has a natural set point, let it find it and stay there".

That time a chiropractor/nutritionist “fat shamed” me (can I even say that when I was a size 4???) ffs

Now, in a new video shared on Instagram, Bridget has further revealed the reality of working as a young model, having been told to do cocaine and "have a lot of sex" while underage.

"By the age of 18, I'd lived in three countries alone. I travelled to all continents except for Antarctica. I'd been groomed by a much older man. I'd been sexually assaulted multiple times," she shared in the video.

"I couldn't socialise without drinking. I was developing quite the reliance on Xanax and Ambien in order to get me through the night. And that was before I turned 18."

The 29-year-old said things "didn't get better from there" and on her 26th birthday she had a nervous breakdown and couldn't leave the house without having panic attacks for an entire year.

"I also had a bout with suicidal ideation, which was terrifying."

Today, she's over two years sober and is four years into her recovery from an eating disorder.

"I'm happy. I'm balanced. I'm strong, and I feel the best I've ever felt," she explained.

"The reality is, I couldn't talk about my experiences before I reached this place because I would have intense PTSD flashbacks. I would have panic attacks, and I wouldn't be OK."

Despite her experiences, Bridget says that she considers herself "one of the lucky models able to make a long career out of the fashion industry".

"But my job should not include abuse. And that is why I'm speaking up now," she concluded.

It's not the first time Bridget has spoken about her heath struggles.

In a piece she wrote for Harper’s Bazaar in 2018, she said that unhealthy dieting left her with little energy left and her hair began falling out.

"For two years, I lived off mostly steamed vegetables and protein shakes. I was so underweight that it would take me 10 minutes to climb a flight of stairs," she wrote.

"I was tired, often going to sleep at 8pm because I had no energy. My hair was falling out. I felt completely alone and isolated, but I was scared to leave my house."

"Unknowingly, I was battling an eating disorder and chronic anxiety that would soon lead to a ruined digestive system, all because I thought I was doing what I had to do to succeed in the industry that I love."

After seeing a therapist, she realised just how unhealthy her "lifestyle was, physically and emotionally".

"Now I’m opening the dialog for people who are struggling with what I struggled with. I'm trying to do it in a way that sheds light on my experience, because I still work as a model and continue to love what I do - but only because I’ve taken the steps to heal, grasping the reality of what’s truly important to me."

These days, Bridget not only works as a model, but is also a passionate mental health advocate.

As for the Victoria’s Secret Show? Well, it's been cancelled.

In 2019, the show was officially called off by Victoria’s Secret’s parent company, L Brands, after months of speculation, record low ratings, and backlash over the brand's lack of body diversity.

"We think it’s important to evolve the messaging of Victoria’s Secret," said CFO Stuart Burgdoerfer, as reported by The Cut.

"We will be communicating to customers but nothing similar in magnitude to the fashion show. We will communicate to customers through lots of vehicles including social media and other channels."

Earlier this month, the brand announced they were getting rid of their iconic 'Angels' and were instead launching 'The VS Collective', a new partnership program, which involves actress Priyanka Chopra, soccer star Megan Rapinoe and LGBTQ activist and model Valentina Sampaio.