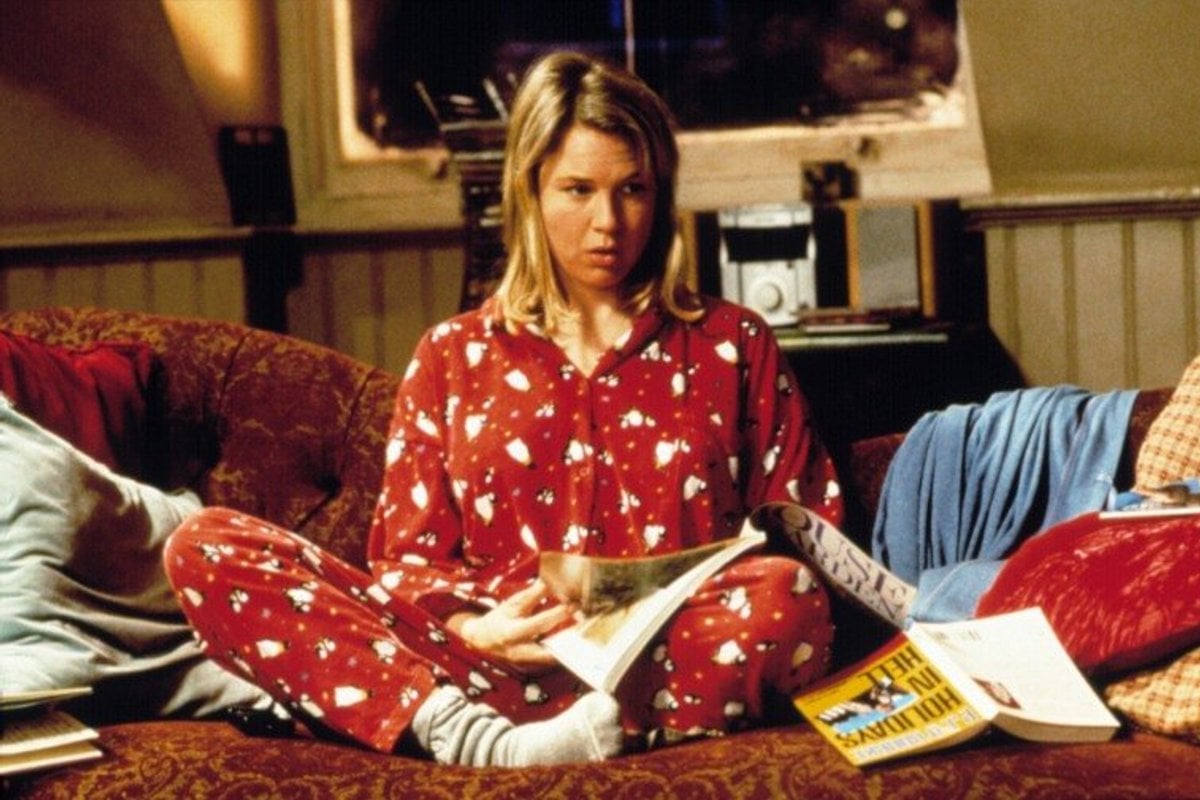 It's been two decades since Bridget Jones introduced us to big knickers, ironing your hair with a... iron and blue soup.

The hit 2001 film, follows 32-year-old English single woman, Bridget Jones (Renée Zellweger) who decides to take control over her life by writing a diary about what she wants to change. And to throw trouble into the mix, two men Mark Darcy (Colin Firth) and Daniel Cleaver (Hugh Grant) start vying for her attention.

Now, as Bridget Jones's Diary celebrates its 20th anniversary, Sally Phillips who played Shazzer, has shared something we never knew about the film. Or rather Renée Zellweger.

Speaking to Cosmopolitan UK, the actress explained that neither she nor Hugh Grant actually heard Zellweger speak in her native Texan accent until after they finished filming.

"That's when I first heard her talking in Texan [the wrap party], and it was a real shock," she told he publication.

"It was a bit of a surprise because I had made good friends with Bridget it turned out - not with Renée. Because, what is not to love about a British woman charging around saying 'f*** 'em' with a giant Toblerone under each arm."

Here are nine other facts you probably didn't know about the film.

1. Kate Winslet and Toni Collette could have played Bridget Jones.

We can't imagine anyone else playing Bridget Jones other than Renée Zellweger. But she wasn't the only one considered for the role.

Aussie actress Toni Collette was was up for the part but turned it down because she was too busy with Broadway at the time.

"I was doing The Wild Party on Broadway when I was offered Bridget Jones’s Diary," she told The Scoop in 2005.

"But I couldn’t do it because I didn’t know how long The Wild Party was going to play."

Kate Winslet was another name thrown in the ring, but producers reportedly thought she was too young to play the lead.

2. Hugh Grant only came on board when Richard Curtis signed up as the writer.

Speaking about casting, Hugh Grant didn't sign up for the film until writer Richard Curtis was called in to work on the script.

"The only reason [I was a hard sell] was because I didn't feel they had the script quite right for a long time. And I kept saying, it's not working. Just get Richard Curtis to come in and help rewrite it," he told Cinema.com.

"Eventually they did, and as soon as Richard came on board, I signed on the dotted line."

"Hugh and I in rehearsals rebelled against the whole idea of a stuntman," Firth told BuzzFeed.

"So it was unchoreographed – that was just Hugh and I fighting like we actually would."

Writer Denise Marti also told Vulture that there were "no stunt coordinators" or "elaborate choreography" for the scene.

"Just a perfectly realised wimp brawl between two upper-middle-class Englishmen coming to awkward fisticuffs in front of a Greek restaurant." 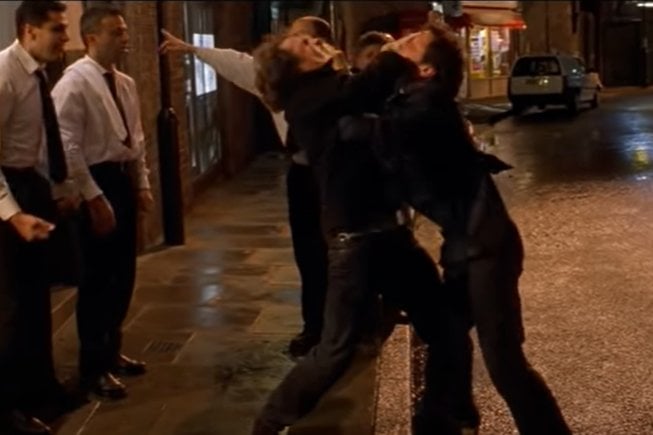 4. The film is based on Helen Fielding's novel, which came from an anonymous column.

Bridget Jones's Diary is based on Helen Fielding's 1996 novel of the same name.

A novel which was inspired by an anonymous column Fielding wrote about single life in London for The Independent.

In the foreword of the book, Fielding wrote, "The Independent asked me to write a column, as myself, about single life in London. Much as I needed the money, the idea of writing about myself in that way seemed hopelessly embarrassing and revealing."

"I offered to write an anonymous column instead, using an exaggerated, comic, fictional character. I assumed no one would read it, and it would be dropped after six weeks for being too silly."

5. A character in the film was based on one of Helen Fielding's best friends.

Bridget's friend Shazzer, is actually based on Fielding's friend, Sharon Maguire, who also happens to be the film's director.

"Im delighted to be in the book, especially as Shazzer is so much wittier than me," Maguire told The Telegraph in 2001.

"The only thing is that you go to parties and you worry that people will expect you to be funnier than you really are."

6. Renee Zellweger worked undercover at London publishing house to prepare for the role.

During that time, she went under the fake name Bridget Cavendish.

"We came up with a plan: she would be Bridget Cavendish, Bridget for obvious reasons and Cavendish as she was to be passed off as the sister of Jonathan Cavendish, a friend of one of our company chairmen," Camilla Elworthy, a Picador publicist told The Guardian.

"That last bit at least is true, and no one was to know that Jonathan Cavendish was one of the film's producers."

While Bridget Jones's Diary is undoubtedly a cult classic, it wasn't always beloved as it is today.

Well, not at first at least.

Eric Fellner, one of the film's producers, told the Los Angeles Times, "We'd had a screening here in the UK that hadn't gone that well, and it'd been quite tough in the cutting room".

"Next was this preview in New York, and I was hiding in the back, thinking it was going to be a disaster," he added.

"But at the end, people were enraptured. It went from being something we were very scared of to a big hit movie."

Yep, the scene where Bridget slides down a pole in the fire station and onto the camera almost didn't make it into the film.

Zellweger told InStyle that when they were filming the scenes in the fire station, they ran out of time to get the shot.

Later, during a pick-up filming day, the actress remembered that it was never filmed.

"I looked across the room, and I saw that there was this plain-old, practical pole that just happened to be in that room," she explained.

"And the camera guys, two of them, ran over there and set the camera up on the floor, and I climbed up that pole and slid down and landed on the camera." 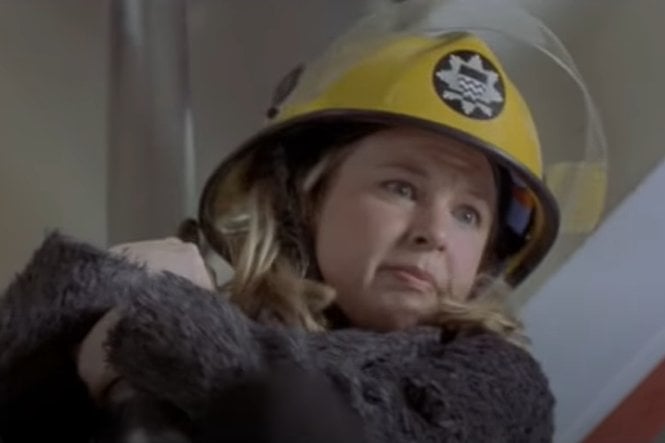 9. Renée Zellweger is down to reprise the role again.

20 years on from the original film, Zellweger said she would be up for playing Bridget again.

"Man, I’d love the experience of revisiting her. I love her. I just think she’s so much fun. She’s the best. Sure, if I got invited to do that, that sounds like fun," she told Vanity Fair last year.

In the meantime, we'll keep our fingers (and toes) crossed.

Reply
Upvote
1 upvotes
@talezassian because you haven't watched one movie they wrote an article about? haha