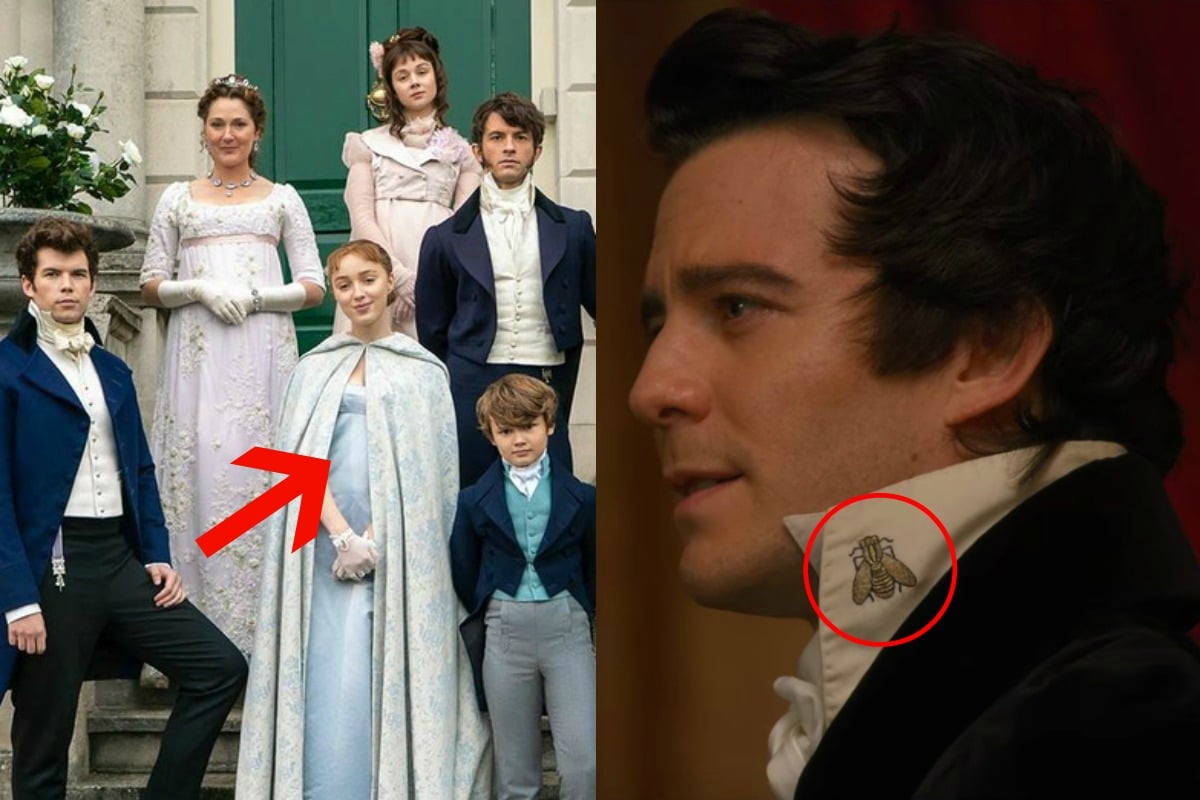 Warning: This article contains spoilers for Bridgerton. If you haven't watched it already, go binge it immediately and then come back to read this.

Bridgerton is the latest Netflix series everyone's talking about. And it's not hard to see why.

The addictive new series, based on Julia Quinn's novel of the same name, delves into the scandalous world of Regency era London and follows the Bridgerton family, led by matriarch Lady Violet Bridgerton (Ruth Gemmell), whose eldest daughter Daphne (Phoebe Dynevor) is ready to enter the competitive "marriage market".

The show only just dropped on Netflix on Christmas Day, but most of us have already accidentally bing-watched the entire eight episode series.

Watch the trailer for Netflix's Bridgerton. Post continues below.

But while we were collectively obsessing over the latest gossip from Lady Whistledown, the gorgeous costumes and yes, a certain 'Hot Duke', you probably missed a few details in the show.

From a Princess Diana connection to hints about a potential second season, here are six things you didn't know about Bridgerton. 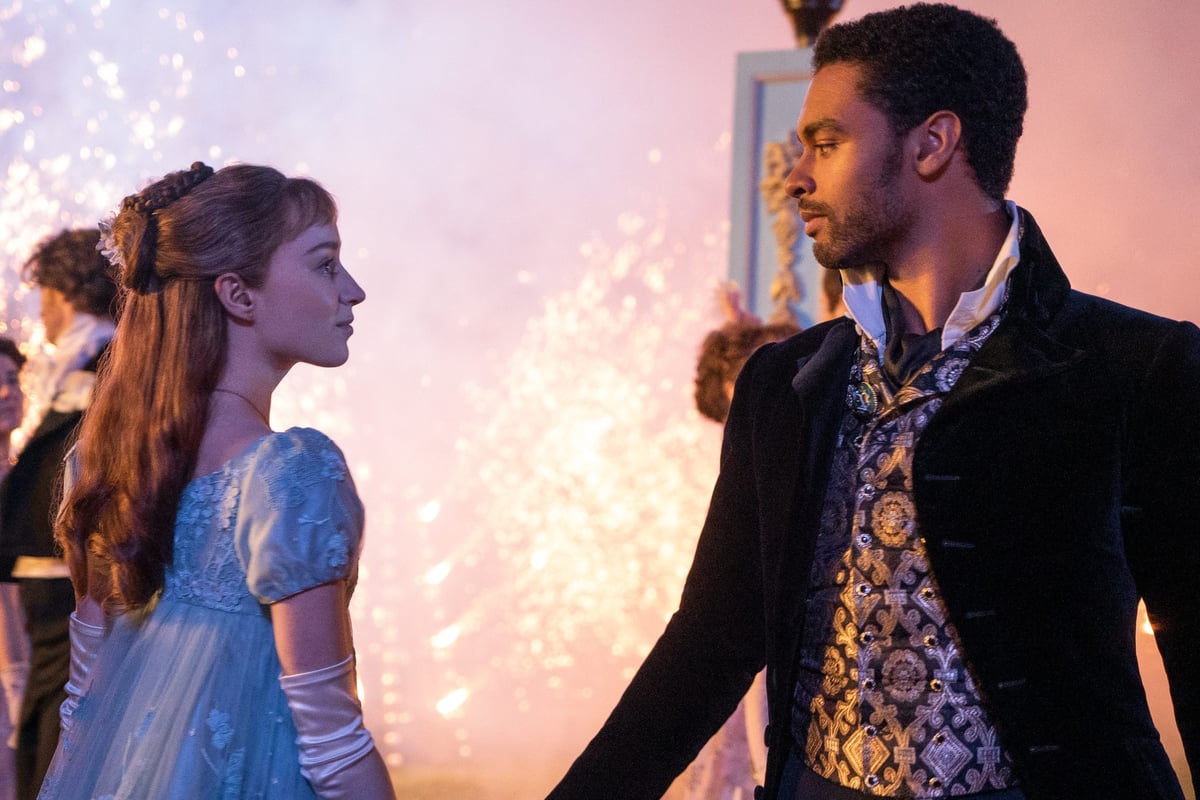 No, your ears aren't playing tricks on you. Ariana Grande and Billie Eilish's songs can be heard playing in the background of some scenes. Only they sound very different to what we're used to.

If you listen carefully, you'll hear the 19th-century orchestra cover Grande's 'Thank U, Next' and Maroon 5’s 'Girls Like You' in the first episode. 'In My Blood' by Shawn Mendes is played in episode two while Billie Eilish hit 'Bad Guy' can be heard in episode three. Episode five features Celeste’s 'Strange and episode six includes a cover of Taylor Swift’s 'Wildest Dreams'.

Have a listen to Vitamin String Quartet's instrumental cover of Maroon 5's 'Girls Like You'. 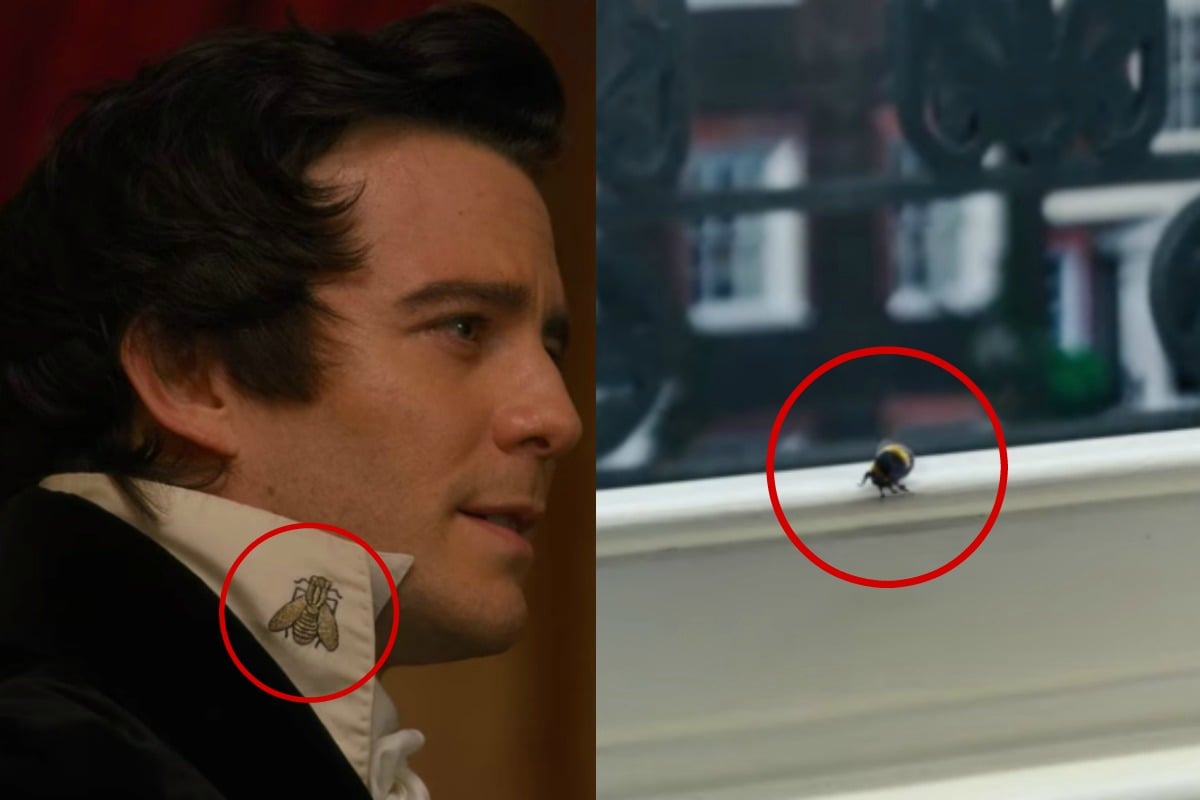 If you go back and re-watch a few episodes, you may notice bees make a reoccurring appearance throughout the series. And it's no accident.

In episode one, a bee can bee spotted on the door knocker of the Bridgerton house. Benedict also has small bee embroidered on the collar of his shirt in episode seven. A bee can also be seen on the windowsill when Daphne gives birth in the last episode.

So what does this mean? Well, it has to do with Edmund Bridgerton's death. In Quinn's novels, Edmund died from a bee sting, causing him to leave the family estate to his eldest son, Anthony. Not only is the bee a nod to the original storyline, but it could also hint a possible second season based on the second novel which looks at Anthony and how his dad's death affected him.

The Bridgertons' home was inspired by Princess Diana's family estate. 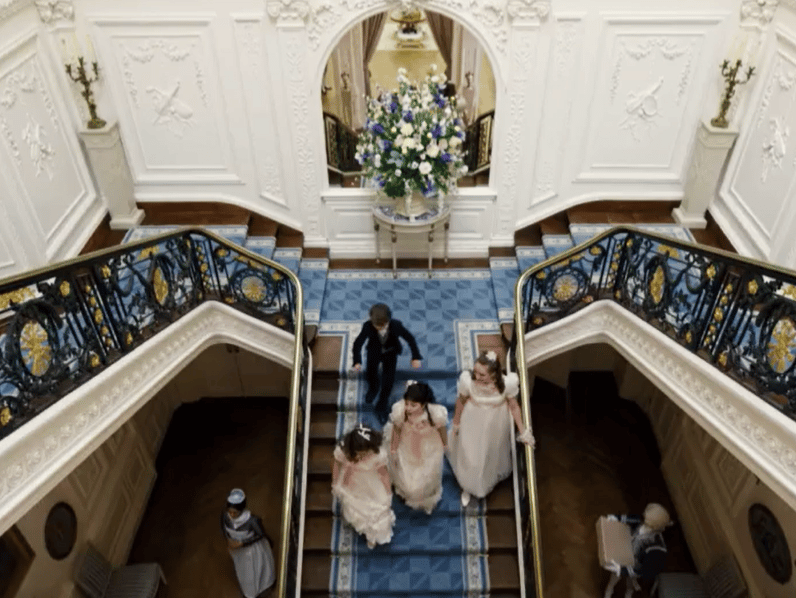 The show's creator Chris Van Dusen explained that the Bridgetons' residence was inspired by the Spencers' estate Althorp, in Northamptonshire, England.

Princess Diana lived in Althorp before she married Prince Charles and was later buried there after her death in 1997.

The interior of Bridgerton House was inspired by my visit to Althorp when I was developing the show. Elegance. Opulence. And that #staircase.😍 #Bridgerton #LiveTweet

Each family wears a different set of colours. 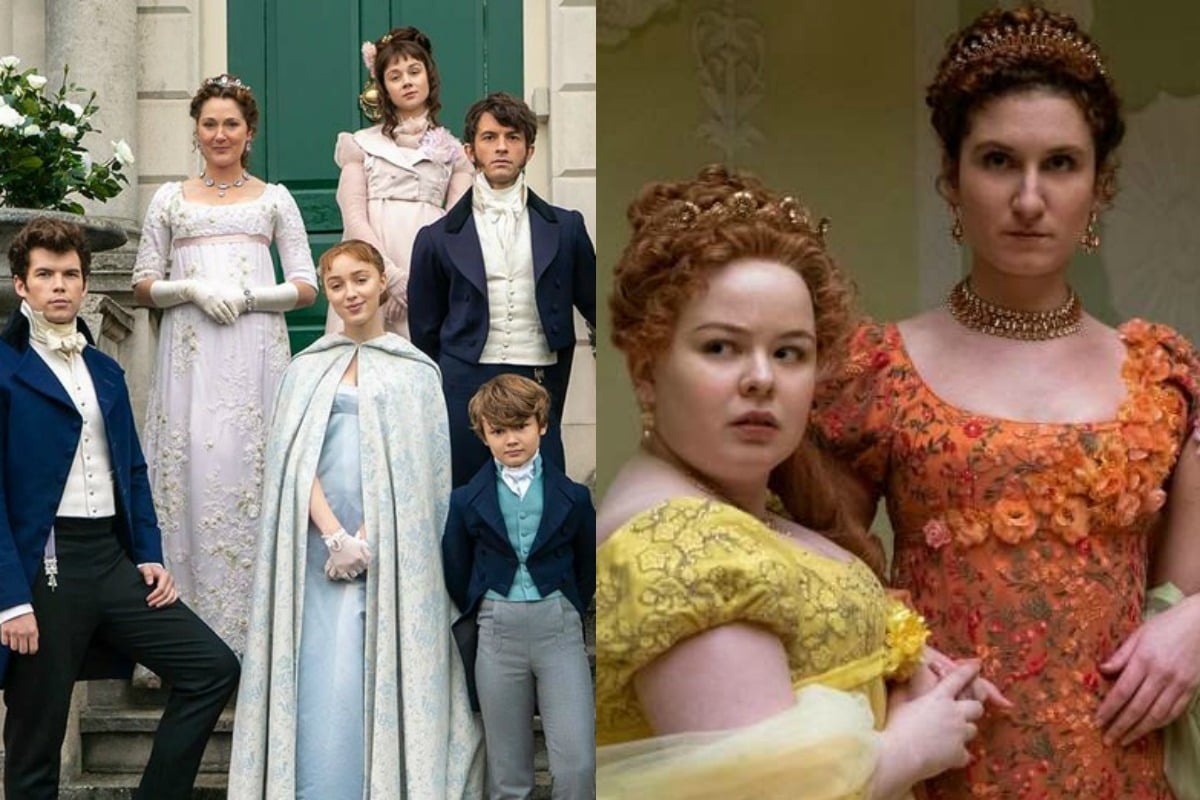 The series features some truly incredible dresses. But have you ever stopped to wonder about the colour of the costumes.

During an interview with Vogue, the show's costume designer, Ellen Mirojnick, explained the meaning behind the colour of each families' costumes. While the Bridgetons mostly wear blues and pinks, the Featheringtons are shown wearing brighter colours like orange and yellow.

"They’re [the Bridgertons] the prominent family of the social season so we wanted their colour palette to be powdery — these pale blues, silvers, and greens that feel like whispers of colour. Later on, as Daphne gets older, the colours become duskier. The pinks and blues are richer and the silvers deepen as she grows and matures. She begins as a porcelain doll and becomes a woman," she told the publication.

She added: "The Featheringtons are new money and [the mother] Portia needs to marry her daughters off. She sets the tone for them as a family and their colour palette is overly citrus because she wants those girls to be seen."

Will Mondrich is based on a real life boxer. 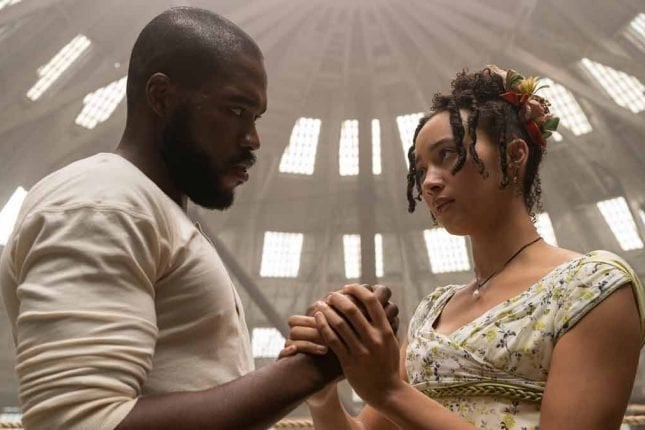 Although based on a popular book series, the show doesn't exactly follow the books. One example of this is the character of Will Mondrich, played by Martins Imhangbe.

Will, who doesn't appear in Quinn's novels, was based on a real-life boxer named Bill Richmond.

Richmond was born into slavery in New York in 1763 and went on to become a became successful boxer in England.

"He found a lot of favour in society due to his charisma and his boxing ability," Martins Imhangbe told GQ.

"He used boxing as a way out and as a way to provide for himself and his family. In the first season we see the early stages of Will trying to build that reputation and who he is." 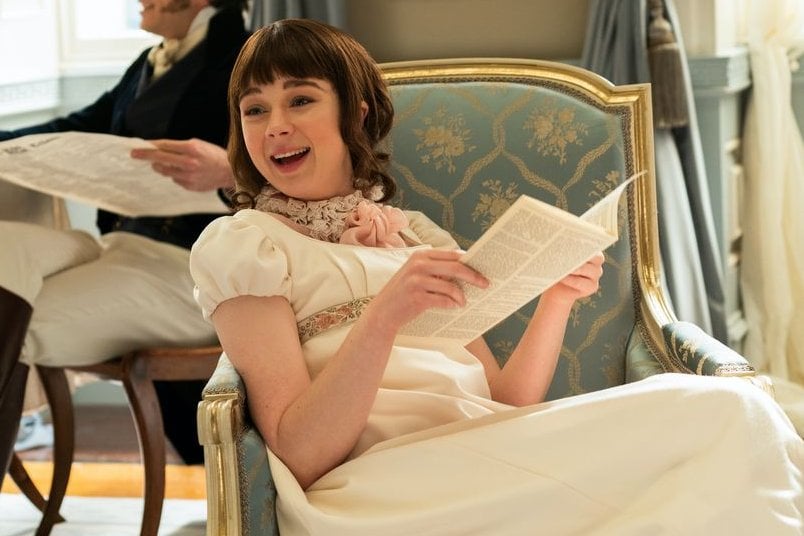 We all fell in love with the feisty feminist Eloise in the show. And it looks like we could be seeing more of her love story in season two (hopefully).

While a second season hasn't officially been confirmed, the series has dropped hints that Eloise could get more time in the spotlight.

For example in episode four, Daphne tells Eloise that she believes her sister "will know what love feels like soon enough next season" when she leaves for her honeymoon. Considering the show likes to compare social season with seasons of a TV series, this could be an Easter egg about Eloise's future adventures.

Eloise’s love story also features in Quinn's fifth book, so we might not be too far away from watching it play out on screen.

Bridgerton is available to stream on Netflix.