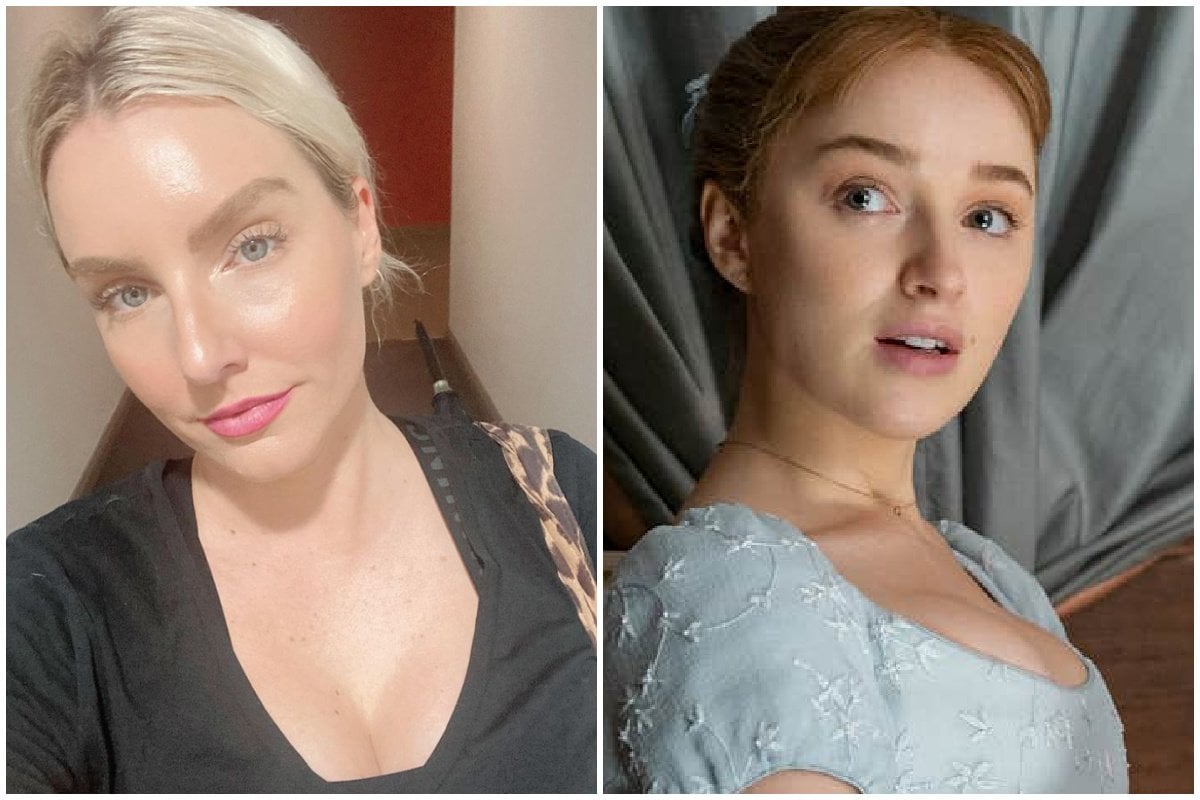 Last month, my mum told me about a show she was loving, called Bridgerton (you've potentially heard of it). I looked it up and scoffed at the idea of watching a 'regency drama'.

"How BORING", I thought to myself, "as if I want to watch some poncy fools gallop around on a horse and use 'thus' in a sentence". But after I saw a few more people on social media share memes about it, I thought I better at least TRY the first episode.

I asked my husband Luke if he fancied watching it with me, and retrospectively, I am SO glad he declined and went to bed. It turned out this was a show I needed to watch solo.

After a mere few minutes, I was hooked. Indeed, there was a poncy chap on a horse using 'thus'; but he was also slamming his shlong into his secret lover behind a tree.

There were bare buttocks involved, and I was LIVING for it. I was a woman obsessed, and stayed up past my bedtime, eager for episode five and six, when things apparently got 'steamy'.

If you haven't seen Bridgerton, here's the trailer. Post continues below.

But episode five was when I first started to unravel.

Luke didn't 'burn for me' on our wedding night!? There were definitely no gentle gasps of pleasure as he gently entered me for the first time as husband and wife. Instead, we banged in my family home, and I had absolutely no recollection of it thanks to a particularly large goblet I insisted on repeatedly guzzling from throughout the celebration.

When Luke and I got married, we'd already been together for a few years, and had been living together for a lot of that time. So, like most couples, we'd been enjoying 'dinky-tickling' for a long time before saying 'I do'.

And the honest truth about a lot of long-term relationships is that sex can get, well... a bit stale. Sure, it's still lovely when it happens, and it's all well and good for someone in a new relationship to wisely tell you that you should try 'spicing things up', but the majority of people in long-term relationships will agree that most of the time you just... can't be f*cked. I could spice things up, or I could listen to a podcast and puzzle.

Listen to Overshare, the podcast you really shouldn't be listening to. In this episode, Kelly discusses how Luke ended up having sex with a piece of fruit. Post continues below.

The thing that shocked me was how irrational I was being.

I was being a ridiculous human, getting all cross and upset that my sex life didn't look like a TV show. When I know no one's sex life looks like that. Maybe at the start when things are exciting and intense - sure - but absolutely no woman in a long-term hetero relationship spends her afternoon on a ladder, with her partner's head up her skirt.

So why the devil was I crying while watching it? And not just a few errant tears, SOBBING. I was sobbing like I'd lost something important. And on reflection, I think it made me realise that I did lose something. My youth.

I may be wrong, and I'm sure no one else cried, but I do think that's at the crux of the popularity of Bridgerton. Over 80 million people have now streamed it, and as far as I can tell by social media, fans of the show aren't young people in their early twenties, they're women over 30.

Women who might feel their days of being 'burnt' for are mostly behind them.

Women whose rose coloured glasses when it comes to love and relationships have been torn off.

I do. And I think that's what made me cry. Because I'll never be that young and full of lust again. And of course, that's okay and normal and to be expected. But Bridgerton did make me grieve for my youth, in a way wrinkles and veins and saggy jowls never have.

Reply
Upvote
I just couldn’t get over the premise that no one had ever told her about sex. I know people like to think of the past as sheltered and prudish but there was a lot less censoring going on than today. And if she really didn’t know then her mother was such a jerk.
essie 21 days ago