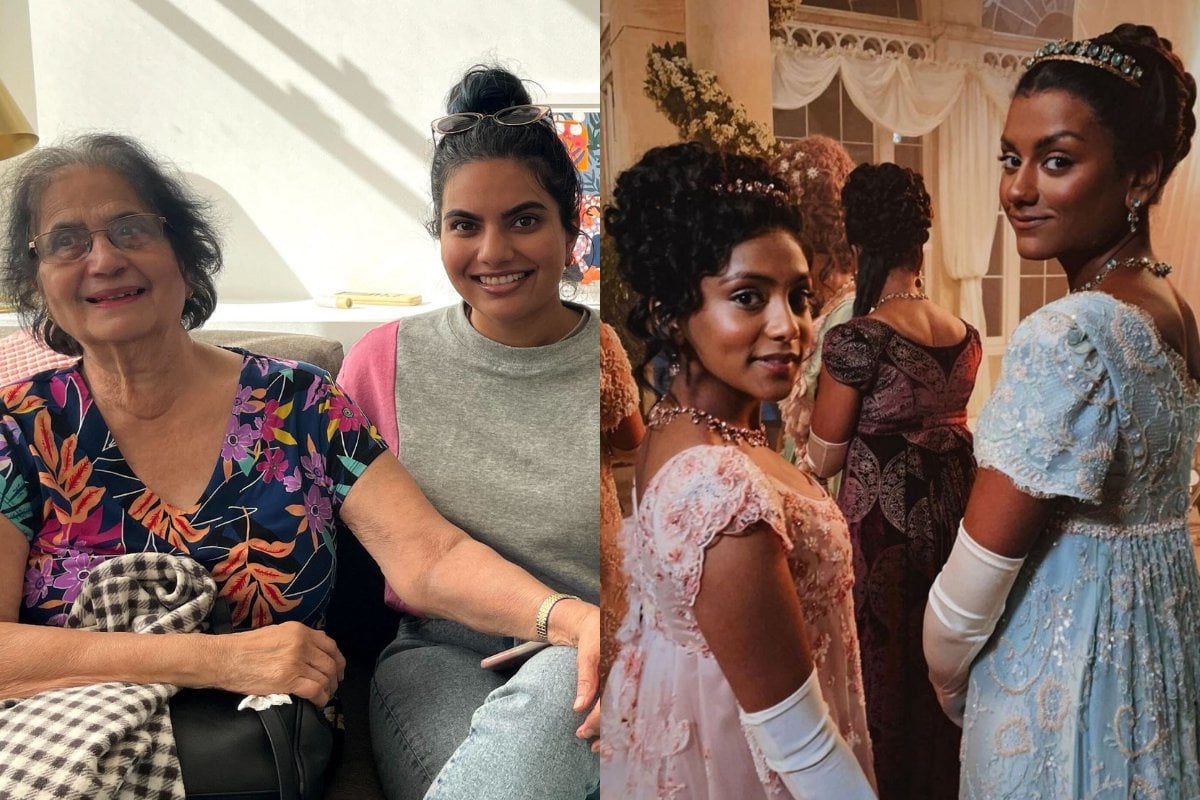 This was a comment my 83-year-old Nana made while she, my mum and I were nestled on the couch watching the second season of Netflix’s period drama Bridgerton.

The female lead this season is played by British actress Simone Ashley, who was born to Indian Tamil parents.

I talked about watching Bridgerton with my family on Mamamia’s daily pop-culture podcast The Spill, and got a lot of messages from women who both agreed and disagreed with this comment and both stances are correct.

"There’s no such thing as 'actually looking Indian'.”

Indian people encompass a variety of different cultures. We all look different, we all eat different foods, we all practice different religions. It’s one of the most diverse nations on the planet.

However, when I heard the words “I like how she actually looks Indian", I straight away knew what my Nana meant - she looked like us.

Seeing a beautiful, dark-skinned woman portray a leading character was something I, my mum and my Nana had never seen before, and that includes Bollywood films. This season of Bridgerton showcased the most realistic representation of a relatable Indian character and it set the precedent for future films and TV that wish to encompass diversity to this level of authenticity.

Being raised in a Catholic-Indian household, western literature was what I grew up with. My Nana was an educator, specialising in European history, so period films and TV shows were a household favourite.

Of course, most western period dramas usually only have Caucasian characters in them so when Bridgerton came along, we were immediately hooked on their diverse (and beautiful) casting. It was something that we had never seen before.

When we found out that the main cast for the second season consisted of an Indian family from Mumbai, all three of us were ecstatic. We booked a weekend to binge watch the entire season.

And we were shocked. 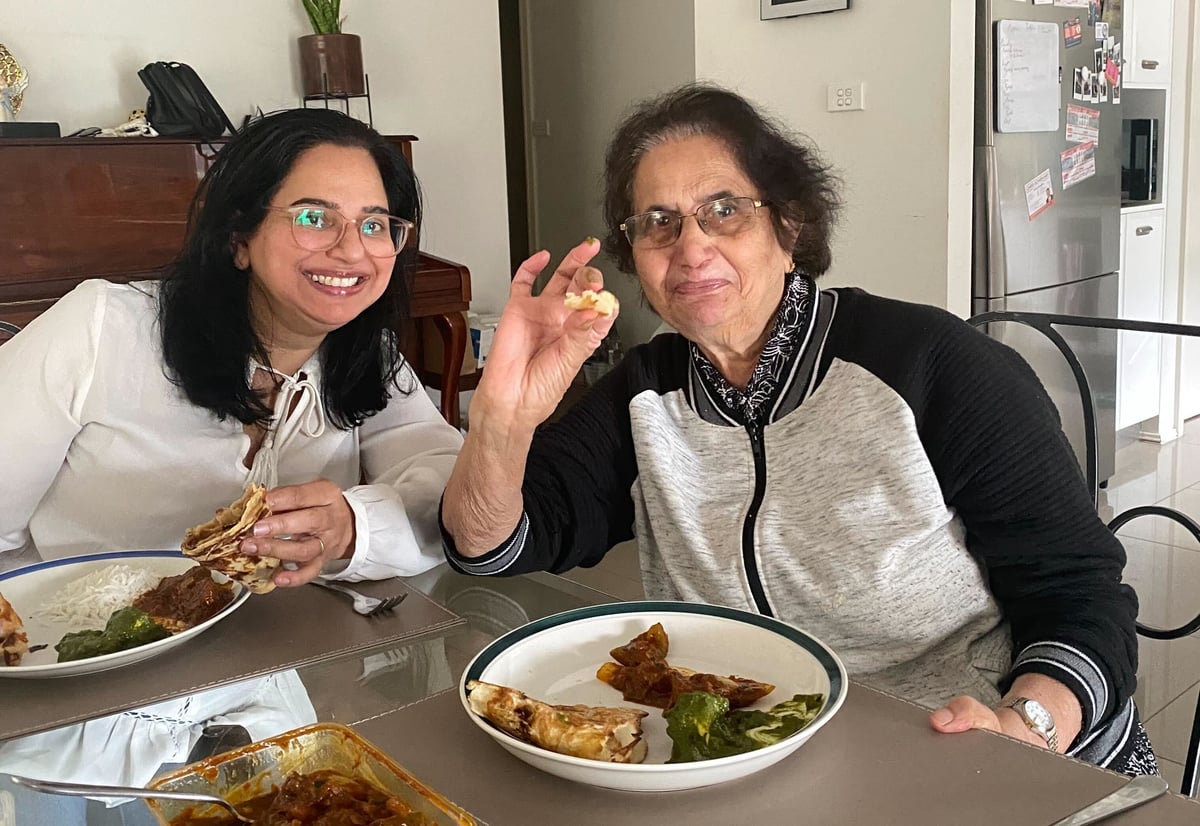 When it comes to western films and TV shows depicting diversity, I’ve been so used to seeing two types of characters.

The diverse character who is clearly there just to tick a box. They’re usually the best friend or the sidekick whose storyline never develops and is just there to make funny comments.

The other character is what I like to call The Mindy Kaling explanation. Before I go on, I would like to say that I think I’m the biggest Mindy Kaling fan in the world.

The show’s she’s written on, produced and created are the reason why I got into my job. Her Indian characters perfectly encapsulate what it’s like being a young ethnic woman growing up in western society.

However, because she is the leading force in introducing Indian characters into westernised cinema, appealing to westernised cultures, most of the time, the storylines fall into the category of “this is what it’s like to be Indian” as an explanation so that people of other cultures understand. 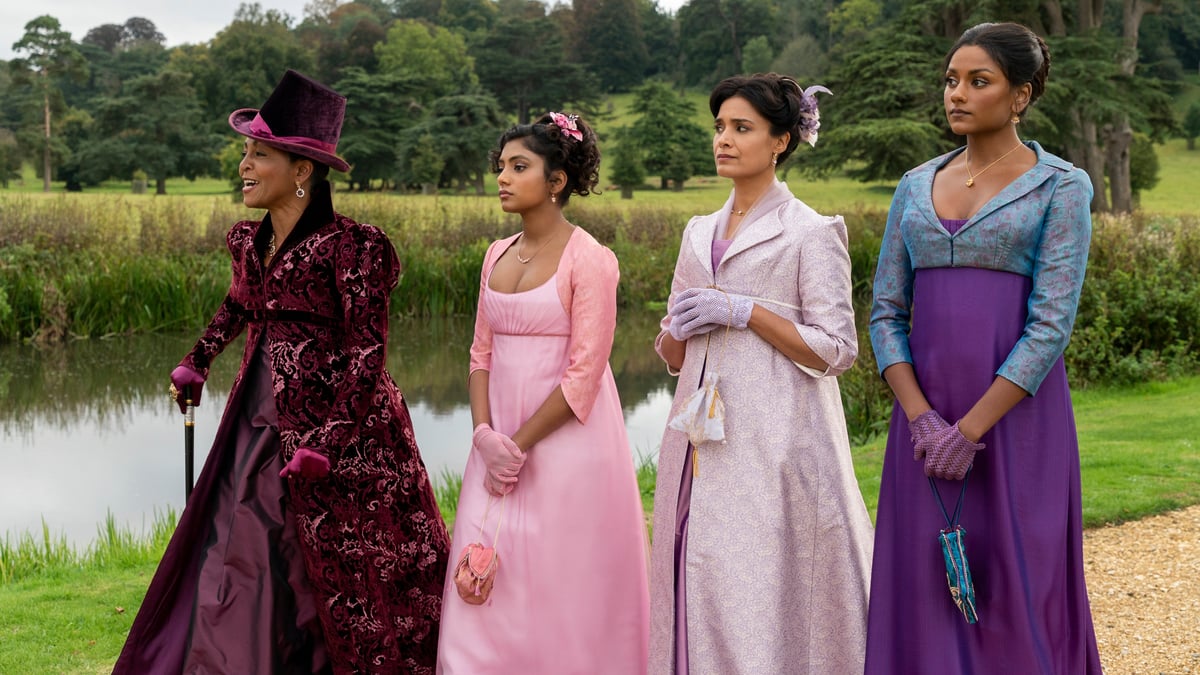 Don’t get me wrong, this explanation is important, but it also makes “being Indian” a large factor within the storylines.

The Sharma family in Bridgerton was the first time I witnessed Indian characters that didn’t fall within these two categories.

When talking about her character Kate, Simone Ashley told Tatler magazine: “Kate comes from India, but what I love is no one comments on that. You follow the character's journey, not her heritage.”

The fact that Kate was a lead female character who didn’t make “being Indian” part of her persona was incredible.

However, the risk of not going into detail in explaining Indian heritage did have its ramifications.

On my Instagram story, I asked what people thought about this latest season of Bridgerton.

57 women said that they loved the casting but hated the storyline.

Yes, the storyline wasn’t as overtly sexy as season one which is what I think most people were expecting, however the intimacy (or lack of) was a brilliant, authentic representation of what it’s like to be the eldest daughter of an Indian household.

SPOILER: In fact, I was actually surprised she ended up with Anthony because the “we all lived happily ever after” ending does not actually reflect reality for most Indian women in this situation.

Listen to Em talk about this season of Bridgerton on The Watch. Post continues below.

The realistic ending would have been Kate going back to India alone, working in a job that she hates just to be able to financially support her mother and sister.

However, Kate did get her happily ever after, falling in love. It was the ending of a storyline that we are used to seeing and feel safe about.

Although most people didn’t get the second season’s storyline, my nana, my mum and I are grateful for finally being able to indulge in a character that was wholeheartedly made just for us.

Want more from Emily Vernem? Okay great, because she has a lot to say. You can sign up to her free newsletter The Lonely Girls Guide and follow her on Instagram @emilyvernem.

K
kate m a month ago

Reply
Upvote
1 upvotes
Loved Season Two as much as Season One. Very different, S2 is not as racy. What I liked was the slow burn approach. The only thing that came up for me is that both fall into the trope of disliking each other at first and then being passionately in love. It's the 'fine line between love and hate'. I hope Season 3 doesn't make this a definitive pattern, and explores a different kind of falling in love.  Love the diversity, it feels so normal, as it should be. Love the costuming and settings.

Reply
Upvote
1 upvotes
@kate m the costumes were so fabulous!
R
rosiecat a month ago