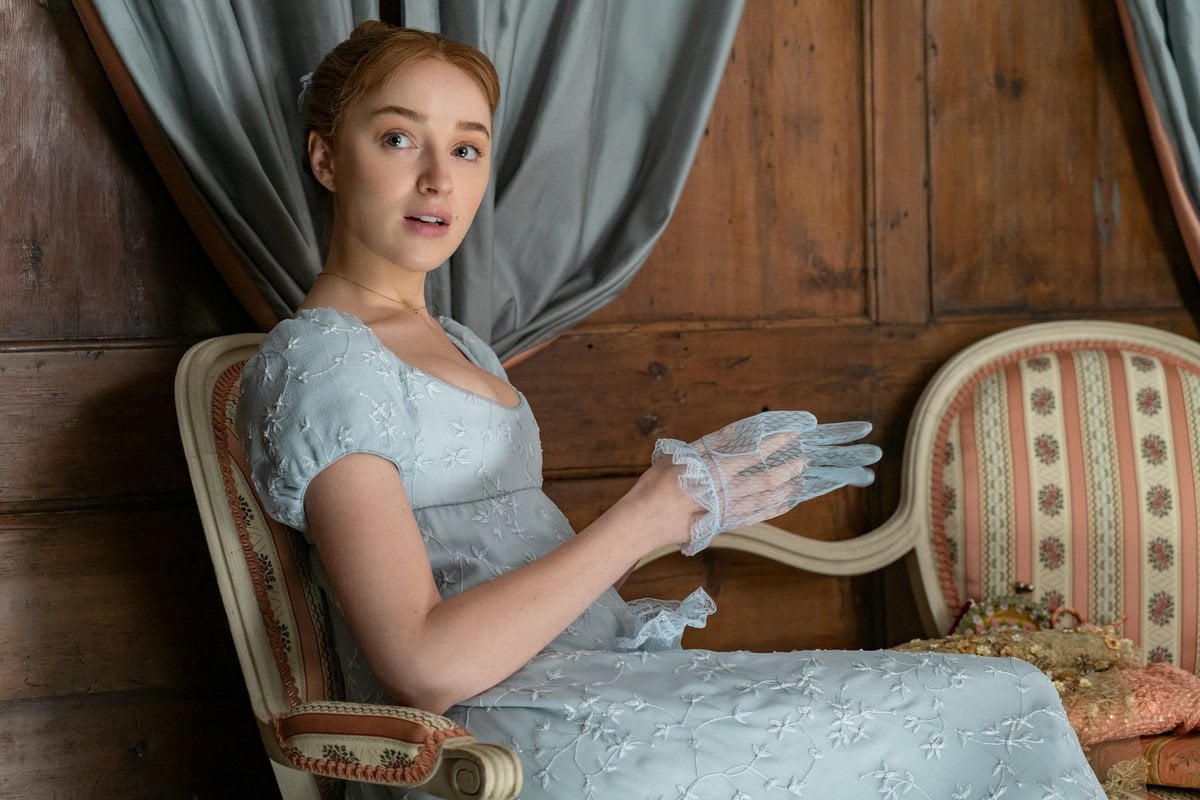 Less than two weeks after its premiere, Bridgerton is on track to become one of Netflix's biggest original shows of all time.

The eight episode series, which premiered on Netflix on Christmas Day, is projected to reach 63 million households within the month. And it's not hard to see why.

For those few who haven't seen it yet, the addictive period drama delves into the world of Regency era London as Daphne Bridgerton (Phoebe Dynevor) prepares to enter the competitive "marriage market".

Watch the trailer for Netflix's Bridgerton below. Post continues after video.

Based on Julia Quinn's novel of the same name, the series features breathtaking costumes, scandalous gossip, endless drama, and a certain 'Hot Duke'.

And yes, we binged it in less than 24 hours.

As we mourn the end of Bridgerton and beg Netflix for a second season, here are nine things you didn't know about the addictive series.

The cast attended a 'regency bootcamp'.

Before filming began on the period drama, the cast attended a 'regency bootcamp' for six weeks.

According to the Welwyn Hatfield Times, the boot camp involved training in "etiquette, horse riding, dancing, voice lessons, pistol training, and boxing," among other things.

"We literally did it all," Phoebe Dynevor, who plays Daphne Bridgerton, told Cosmopolitan UK.

"We had amazing intimacy coordinators, we had horse riding lessons, dance rehearsals, etiquette training, piano lessons... so we ticked every box in that respect."

There was an intimacy coordinator on set. 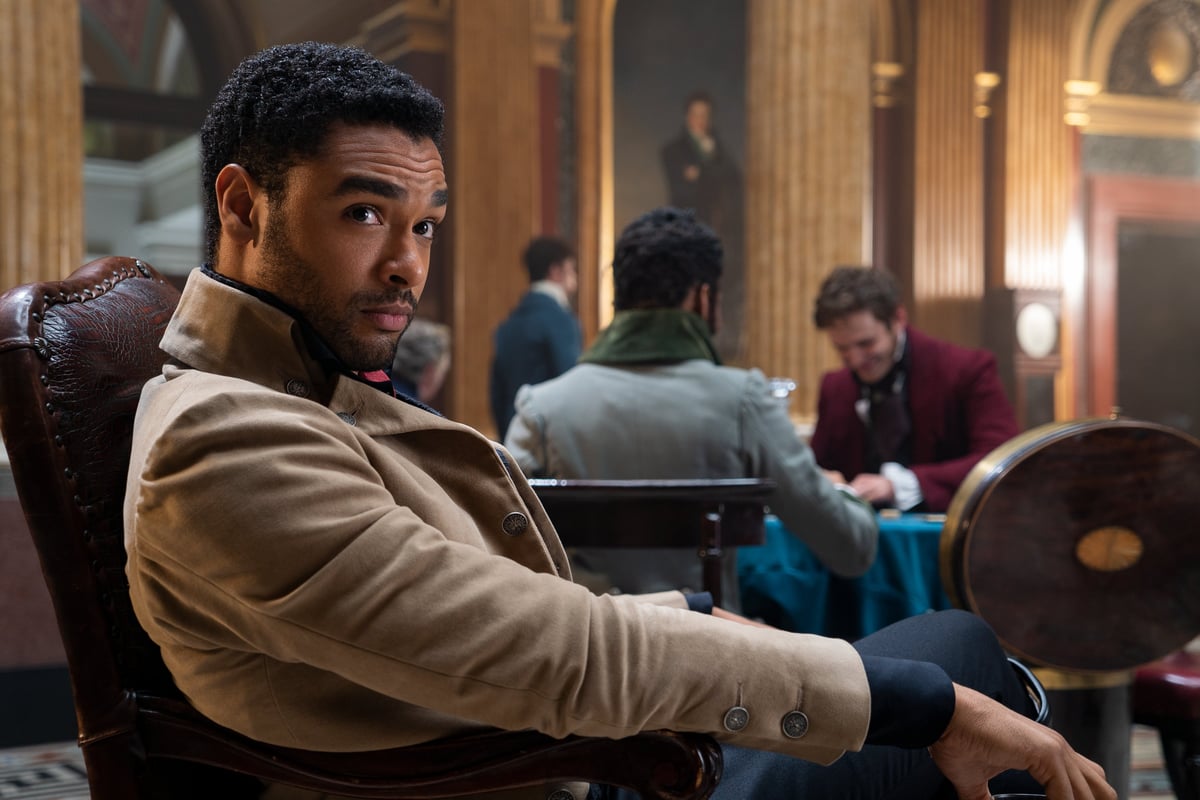 Regé-Jean Page as Simon Basset, the Duke of Hastings. Image: Netflix. As the season progresses, there's no denying that Bridgerton gets pretty damn steamy.

In an interview with E! News, Phoebe Dynevor, who plays Daphne, and Regé-Jean Page, who plays Simon, shared that there was an intimacy coordinator on set who made the sex scenes feel "like they were intricate stunts".

"We were immensely well prepared," Page said. "We had dance lessons, writing lessons — essentially, a lot of time in each other's arms before we even hit the set."

He continued: "And so once you've spent that many hours on the dance floor with someone, being close to someone, literally catching each other when you fall — and we did fall because we weren't brilliant dancers — then a lot of it happens quite organically."

Showrunner Chris Van Dusen added that the steamier scenes throughout the series were "really, really rehearsed".

"Those scenes were heavily choreographed, much like an action sequence, like, 'Your hand goes here, your leg goes there'," he said.

The show was Shonda Rhimes' idea. 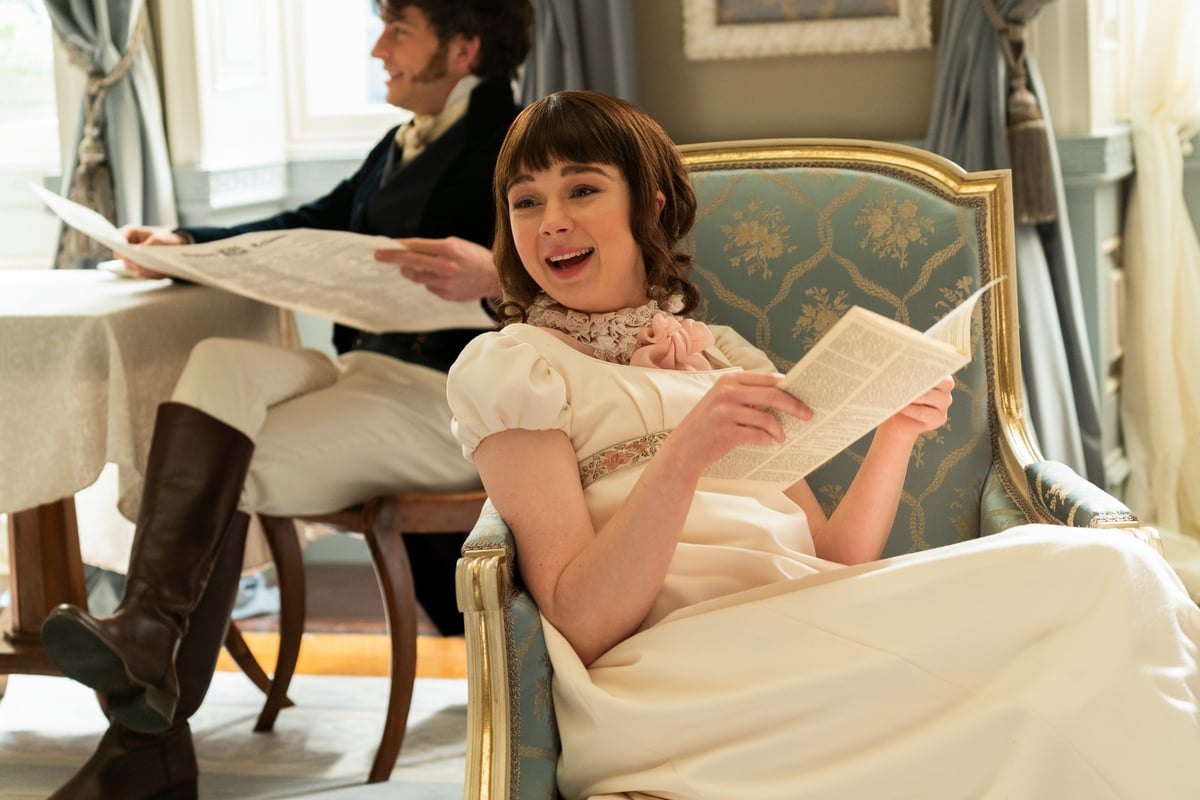 While Chris Van Dusen was the showrunner on Bridgerton, the series was actually executive producer Shonda Rhimes' idea.

Acccording to Cosmopolitan UK, Rhimes gave Van Dusen Julia Quinn's novels because she wanted him to bring the book to life.

Prior to Bridgerton, Rhimes and Van Dusen worked together on Grey's Anatomy and Scandal.

Every single Bridgerton costume was handmade.

To prepare for the show, a team of over 230 people built almost every single costume from scratch.

According to IndieWire, the costume department created more than 7,500 outfits, including handmade shoes and jewellery.

In fact, Phoebe Dynevor, who plays Daphne Bridgerton, never wears the same outfit twice in the series, meaning the lead actress had over 100 dresses.

"For my first costume fitting, my agent said, 'They need you for four hours,'" Nicola Coughlan, who plays Penelope Featherington, recalled.

"Normally you just try something on and see if it fits, but because everything on Bridgerton was couture, they had to get every single measurement right. They’d make an outline of your hand to get gloves made, they’d get shoes made just for you, everything was specially coloured and if they didn’t have the right colour, they would dye it." 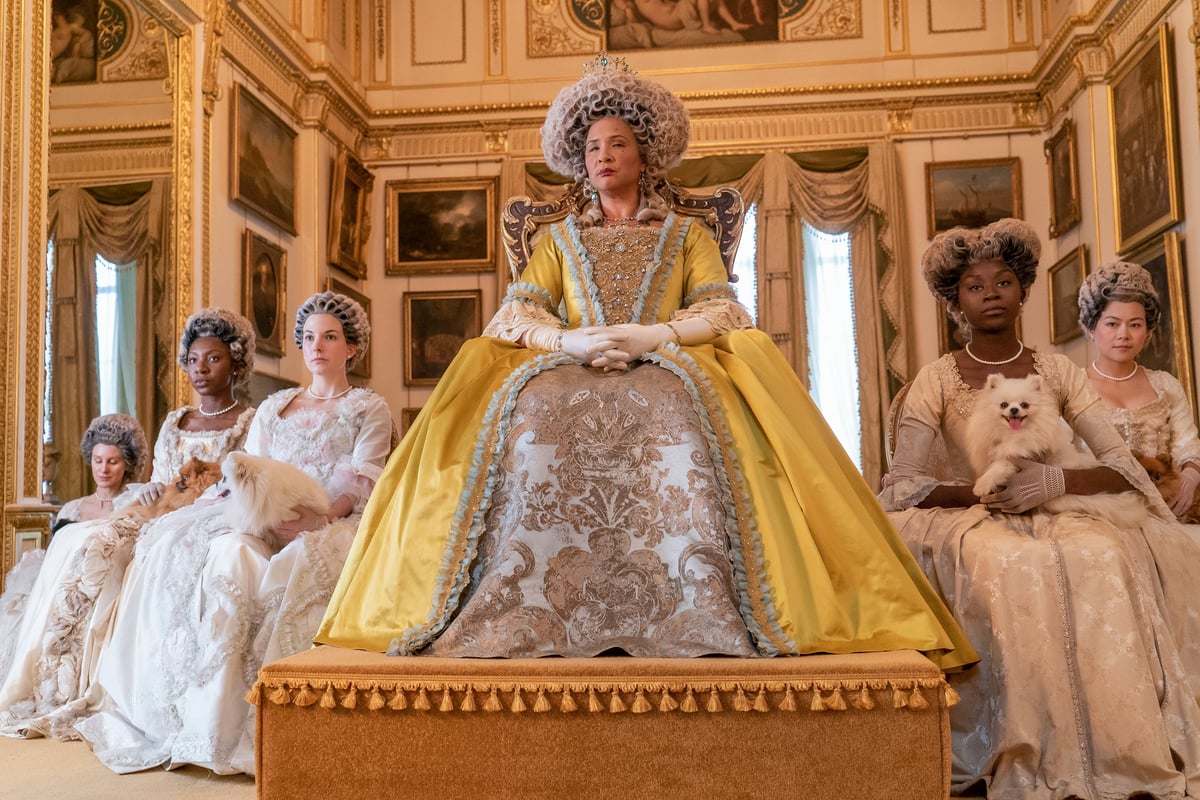 In every scene, Queen Charlotte wears a different gown with a matching wig.

"She’s got nothing else to do," showrunner Chris Van Dusen said, explaining the decision.

"She’s waiting for her husband to die and she’s quite bored. It took us a lot of time, but it was great and a really creative thing to do."

The props were also all handmade.

According to Architectural Digest, the production design team built almost all of the furniture for the series including the curtains.

The locations are very familiar. 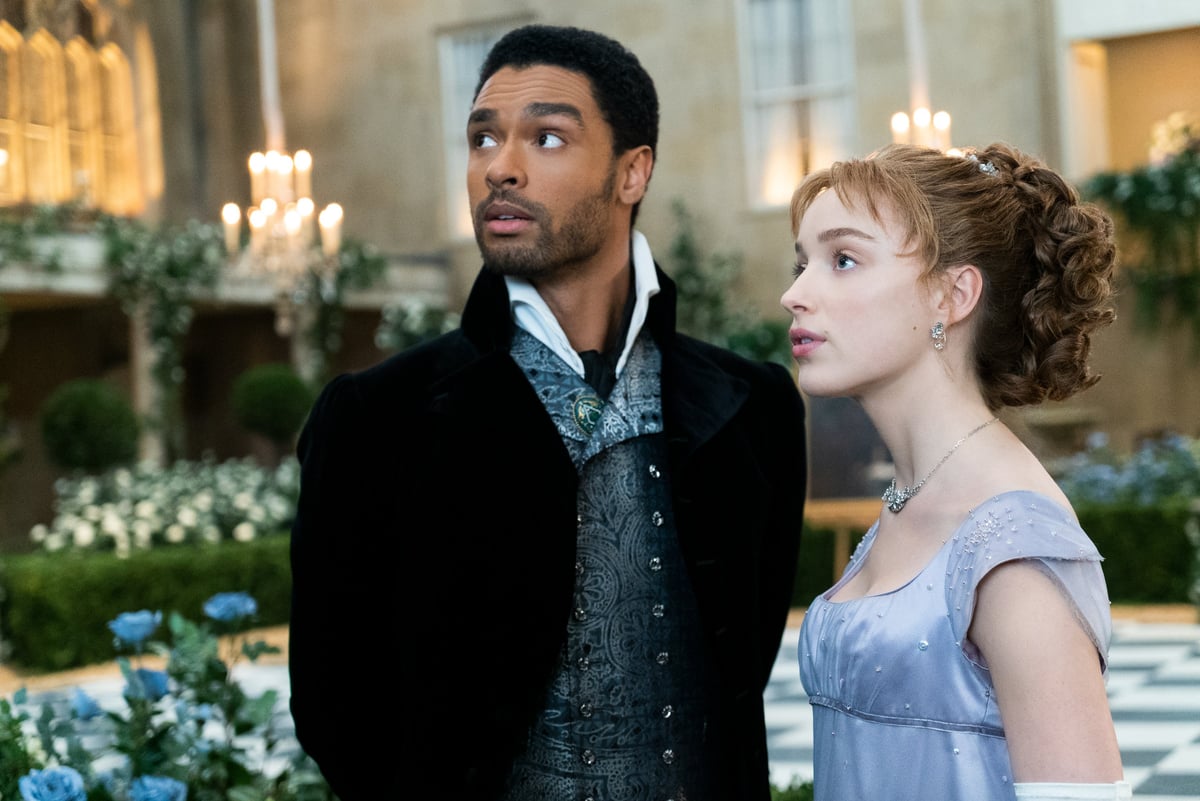 There's a reason some of the locations in Bridgerton feel familiar.

A number of scenes were also shot at a mansion next to Prince Charles' home.

According to Golda Rosheuvel, who plays Queen Charlotte, the Queen's pet Pomeranians had strong personalities.

"I do very well with dogs, and these were very feisty, so you had to calm them down a little bit, but they were excellent dogs," she told the Welwyn Hatfield Times.

"They were as rowdy as the Queen sometimes, but I loved that. I think they were all female, bar one. It’s a very female driven show."

Claudia Jessie was renovating her canal boat when she landed the role of Eloise Bridgerton. 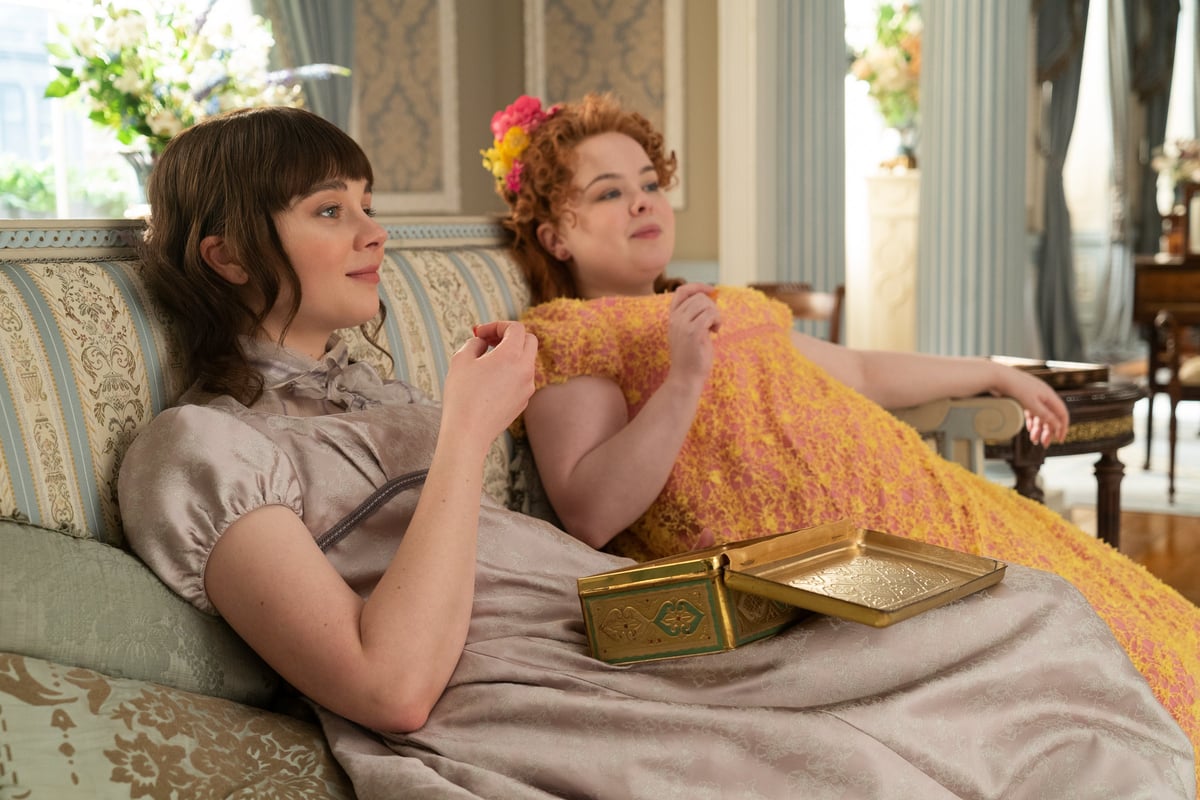 "I remember at that time thinking, 'You’ll get a job and everything will be fine'," she recalled.

"Then my agent called me and told me I got this role. I just went back to painting the roof, but I thought, 'This is a great day'."

Bridgerton is available to stream on Netflix.