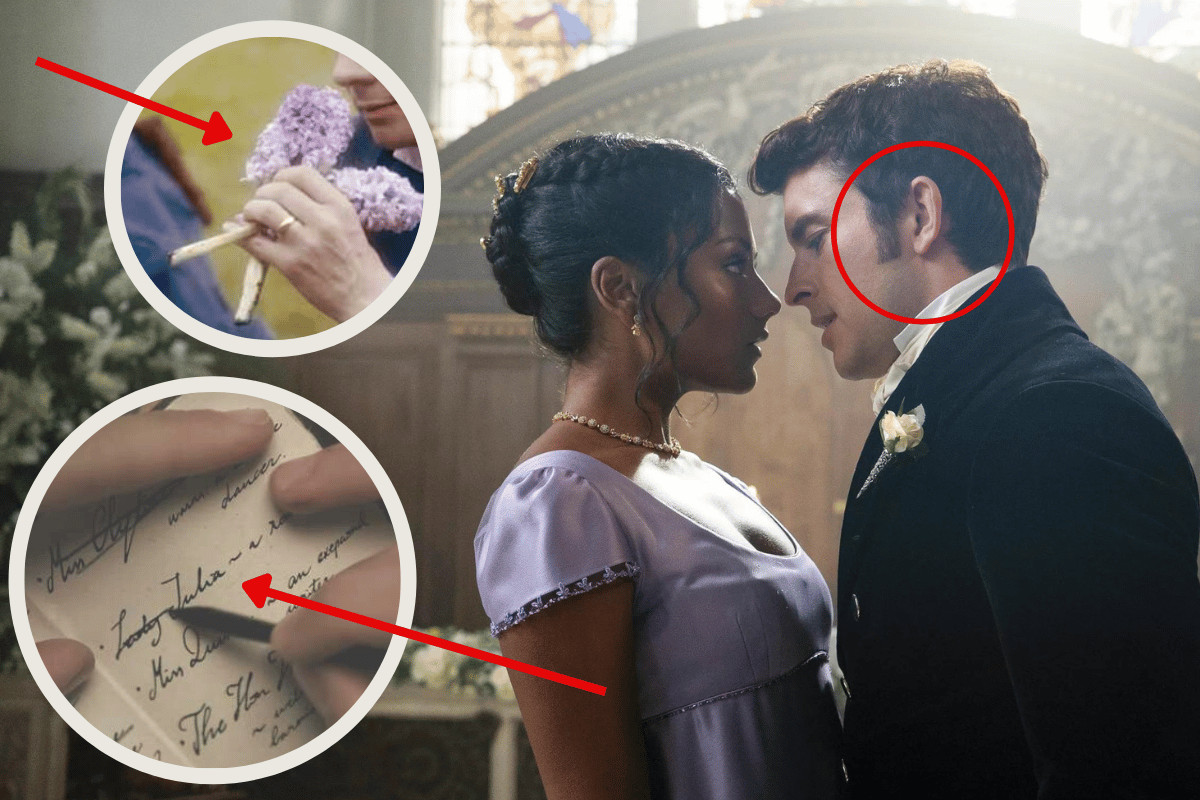 Warning: This post contains spoilers for all episodes of Bridgerton season two.

Dearest reader - have you been watching Bridgerton season two?

It's been a season of lustful teasing, powerful women, a sex scene or two and a pretty good period drama plot.

This season we saw the love story between Kate Sharma and Anthony Bridgerton play out, and boy was it a good one. We were also introduced to plenty of new characters and storylines, but it is also packed with subtle references and nods to the first season, the books, and more.

1. The story behind Anthony's sideburns.

One of the most notable differences between the first and second series is Anthony's sideburns. And according to the show's makeup designer, there's a reason for the shakeup.

Jonathan Bailey, the actor who plays Anthony told British Vogue of season one's sideburns: "Those mutton chops are all about proving your worth and status. It's like the Georgian equivalent of owning a Ferrari. Someone's compensating for something, and with Anthony, it's his inability to deal with his feelings in a healthy way."

And in season two, those hefty sideburns are gone.

In an interview with Us Weekly's Stylish, Bridgerton's lead hair and makeup designer Erika Ökvist explained that Anthony's facial hair ended up being "crucial to his character evolution".

"This season, we wanted to make him a little bit less high maintenance. He needed to get into [the mindset] of being the head of the family. His looks were a bit more pared back, a little bit more no-nonsense. We did that with smaller sideburns that weren't so in your face." 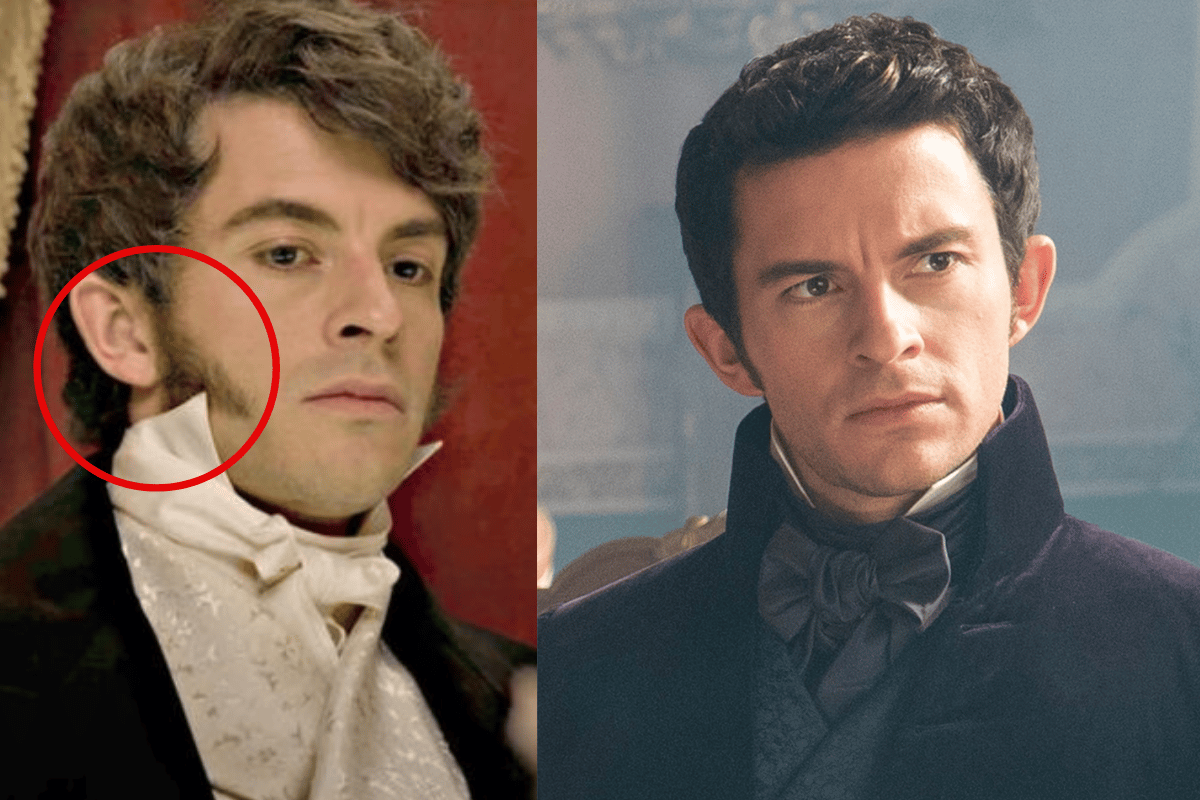 Anthony's sideburns in season one versus season two. Image: Netflix.

2. There's more to the story with that Bridgerton season two storm scene.

While staying at Aubrey Hall, we see Kate in the library room trying to distract herself. She is then disturbed by Anthony who asks "Could you not sleep? If your lodgings are not comfortable..." only for Kate to reply - "It is the storm. I have always found them unsettling."

She goes on to also say the rain makes her think of her father, but in reality, it has more to do with her biological mother.

In Julia Quinn's The Viscount Who Loved Me, she told the full story of Kate Sharma and her fear of thunderstorms.

Initially Kate struggles to understand why she is afraid of lightning and thunder, but after speaking with her stepmother Mary Sharma, she discovers that her biological mother died on a night of severe storms when Kate was an infant. The book details a "roaring storm" so powerful that it split a tree in the family's backyard.

And although the TV show has a subtle nod to it, the full story wasn't explored in season two. 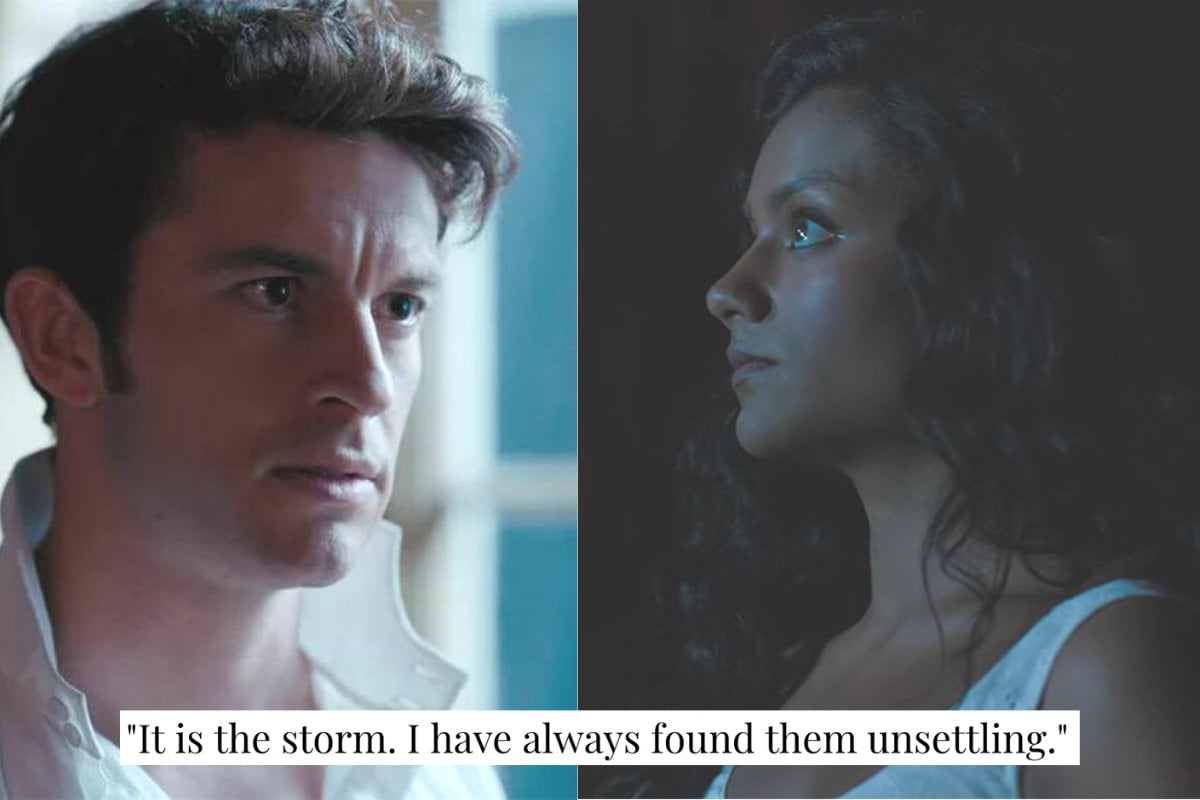 The author behind the series Julia Quinn explained to PEOPLE what it was like to condense each of the novel's plots into its own series.

"My books are very tightly wound around the main characters... With the television series, especially when there's such a big cast, you need to spread the focus a little bit, which they've done beautifully... It's not that they're jumping ahead. But you can see little things like they're getting things ready, hopefully for more."

She continued: "I think they [the fans] are going to be really amazed at how you can take something and not adapt it word for word - because it's absolutely not - and yet still stay so incredibly true to the characters and story."

3. The 'longing hand touch' nod to season one.

There was a subtle nod to season one's centre stage coupl, Daphne and Simon, too. Avid viewers would remember the moment Daphne and Simon are about to marry, their fingers caressing one another's ever so slightly, with the show really focused on drawing out that teasing moment.

And in season two, Shondaland - the production company behind Bridgerton - did the exact same thing.

Season two was evidently far less sexy and steamy, but it was those softer moments of affection, for example their similar longing hand touch - that really built the chemistry between Kate and Anthony. 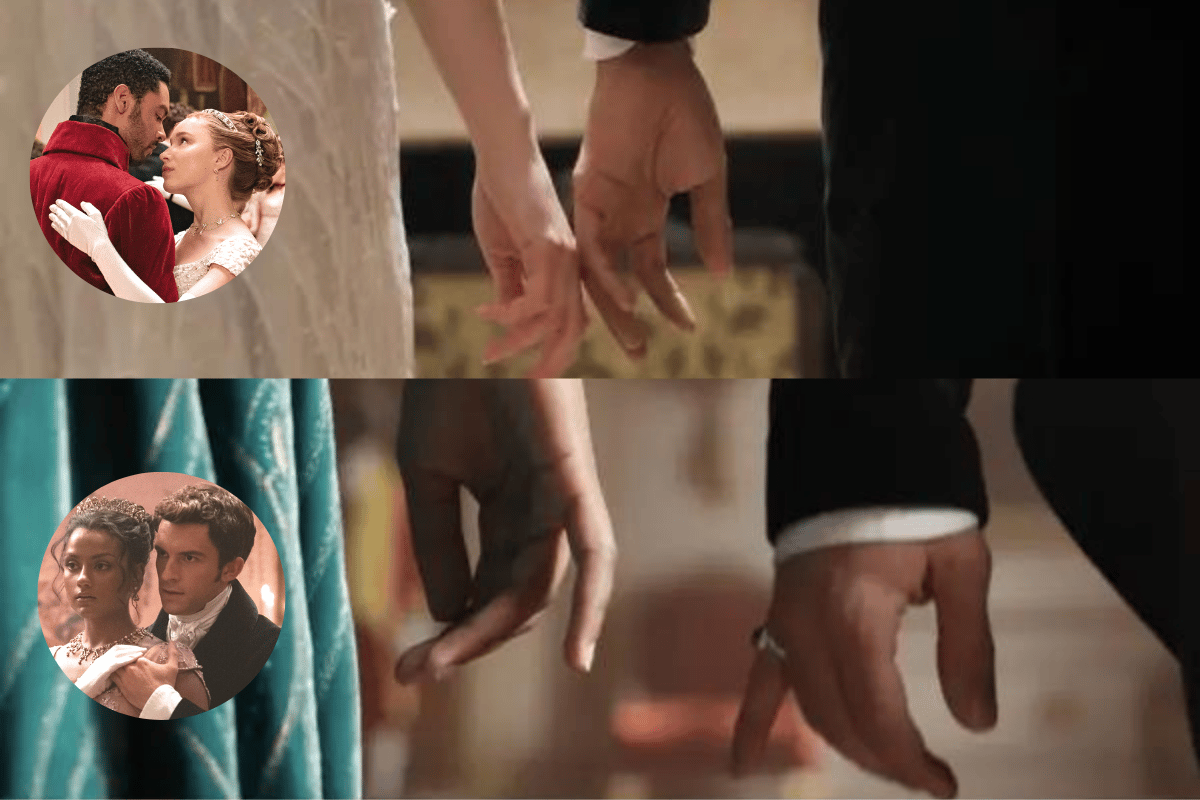 4. There are heaps of 'Easter eggs' to do with flowers.

Eagle-eyed viewers perhaps would have spotted this link.

In season one, Lady Bridgerton - aka mumzy - told her son Anthony while doing a spot of cross-stitch, that tulips "symbolise passion".

It was in reference to Lady Bridgerton deciding to embroider tulips into the hem of her daughter Daphne's wedding dress. The scene finishes with Lady Bridgerton saying to Anthony - "Perhaps your bride would like the same."

Then in season two, Kate experienced a horseback riding accident, where viewers saw her resting in bed to recover. Anthony came to see how she was. And what did he bring with him? Well, a bouquet of tulips of course. 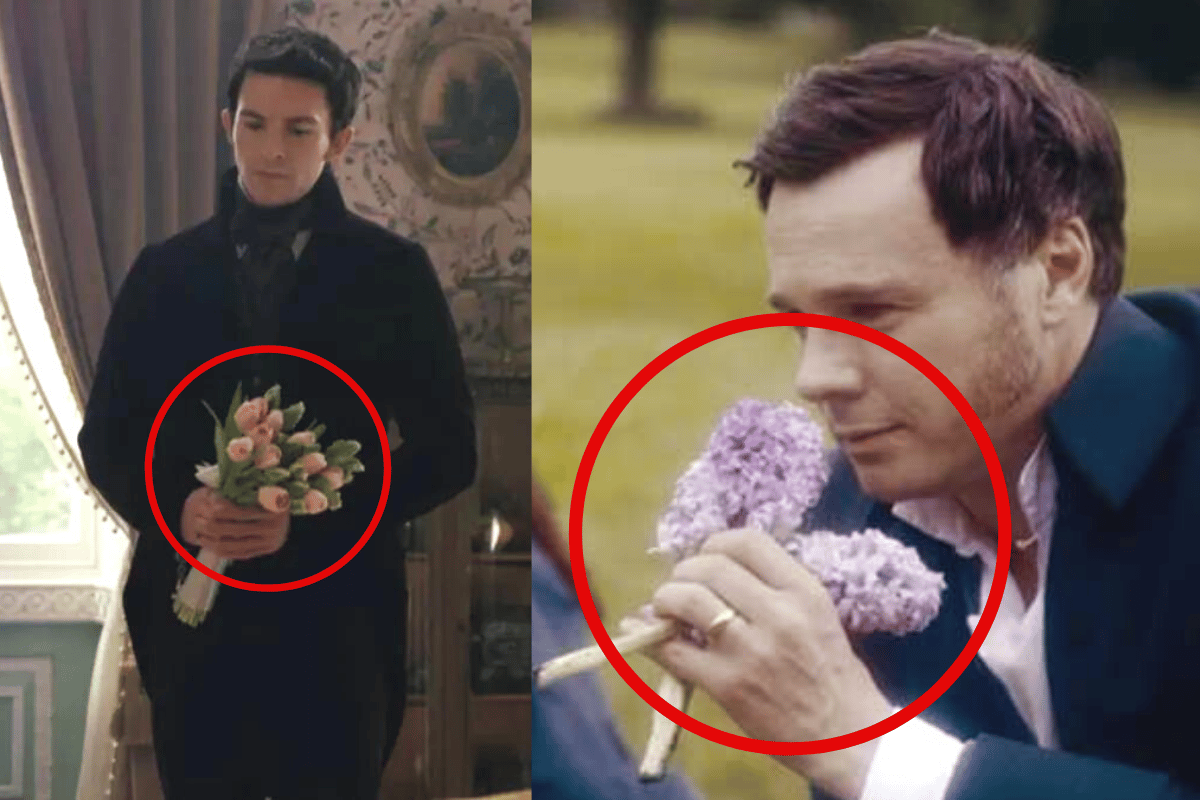 Another special flower moment you may have missed was to do with Lady Bridgerton's late husband.

In season two, we saw a sad flashback showing how her late husband Edmund died when he was stung by a bee. In that scene before he died, Edmund was picking flowers with his son Anthony - hyacinths to be exact.

In the wake of Edmund's death, Lady Bridgerton gives birth to their final child, a daughter called Hyacinth Bridgerton, named after her father's favourite flower - as the book describes.

5. A sweet tribute to Bridgerton's author.

Fans may have noticed this - in the first episode there was a tribute to author Julia Quinn.

In the episode, we saw Anthony madly trying to find the 'perfect' woman for himself, going through his black book and crossing off countless names for very frivolous reasons.

But it was two of those names in the book that caught our attention - "Lady Julia - a romantic" and "Miss Quinn - an exceptional writer."

As one viewer wrote on Twitter: "Love this Easter egg on Anthony Bridgerton's shortlist of potential Viscountesses. Lady Julia and Miss Quinn, a romantic and an exceptional writer = Julia Quinn who wrote the books."

And they're spot on! 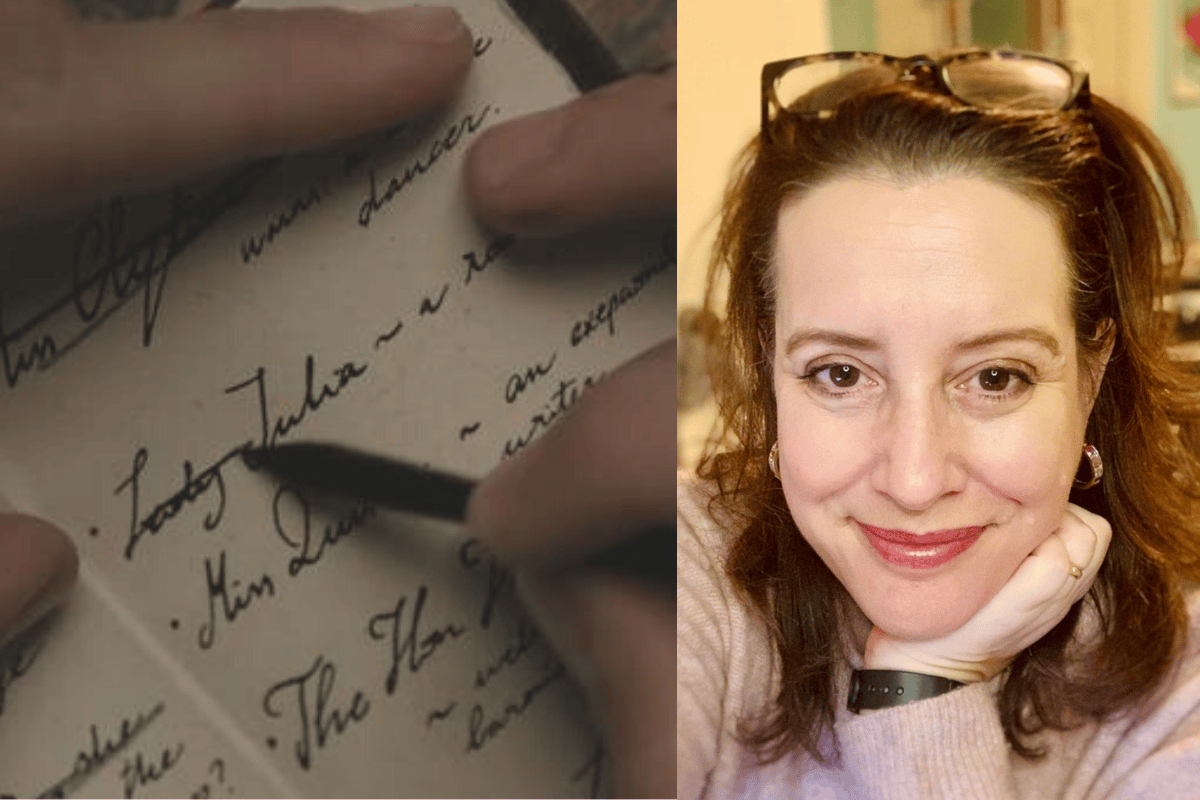 6. The links between Pride & Prejudice and Bridgerton season two.

Interestingly, there's a heap of references to Pride & Prejudice in season two of Bridgerton.

The Jane Austen novel is renowned among authors and English literature as one of the best examples of period romance drama books. So it makes sense why Shondaland was keen to recreate some of Pride & Prejudice's magic in Bridgerton.

One example is the 'hand reflex' between Kate and Anthony versus Mr Darcy and Elizabeth Bennett when each couple touches hands for the first time.

And who could forget the iconic moment from Pride & Prejudice's 1995 series starring Colin Firth which saw him go for an impromptu dip in his private English lake, only to come out of the water with a wet shirt clinging to his chest. He then bumped into Elizabeth and there was some lovely sexual tension.

The same went for Bridgerton, when Anthony falls into the lake in front of Kate and some of the society crowd. And of course, that scene was just as fun to watch. 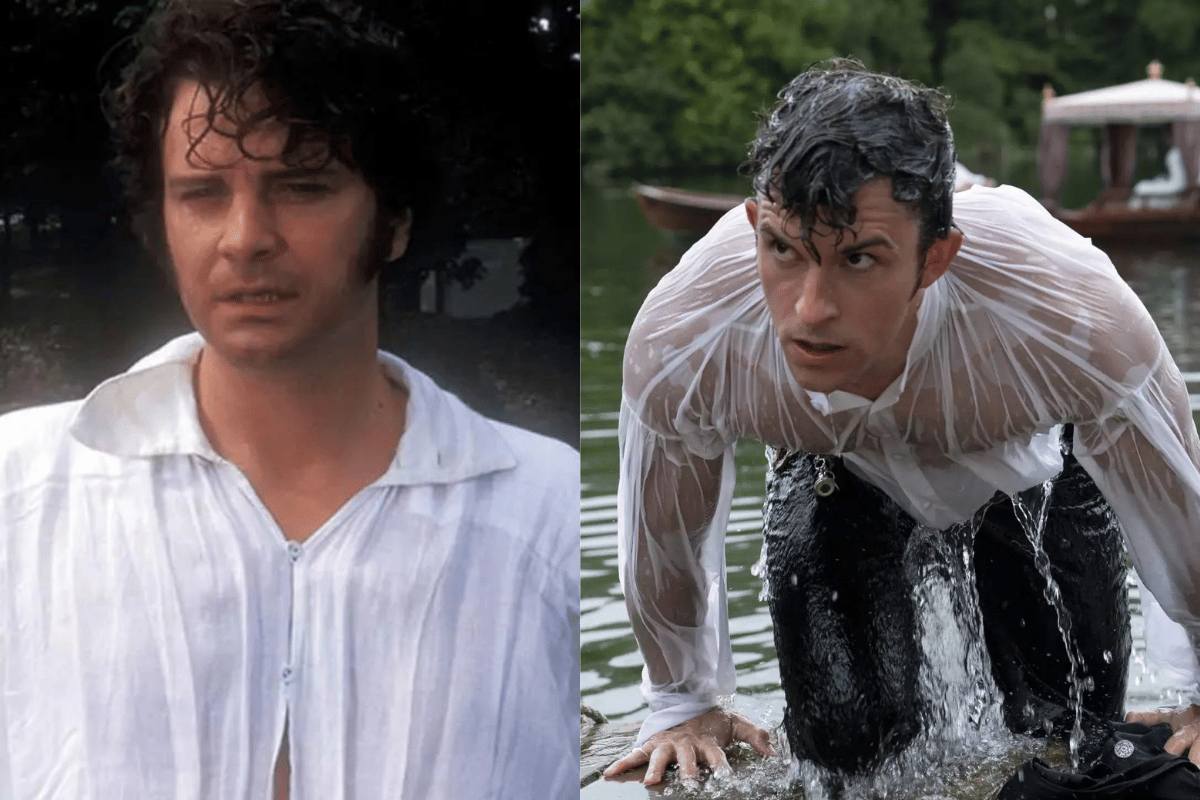 The creator of the Netlflix series Chris Van Dusen confirmed it was a direct nod of appreciation - "I've definitely talked about my love for that 1995 BBC adaptation with Colin Firth emerging from the lake in his white shirt. That scene of Anthony going in relates to that. It's an Easter egg for fans of the genre."

Did you spot any 'Easter eggs' in Bridgerton season two? Let us know in the comments below!