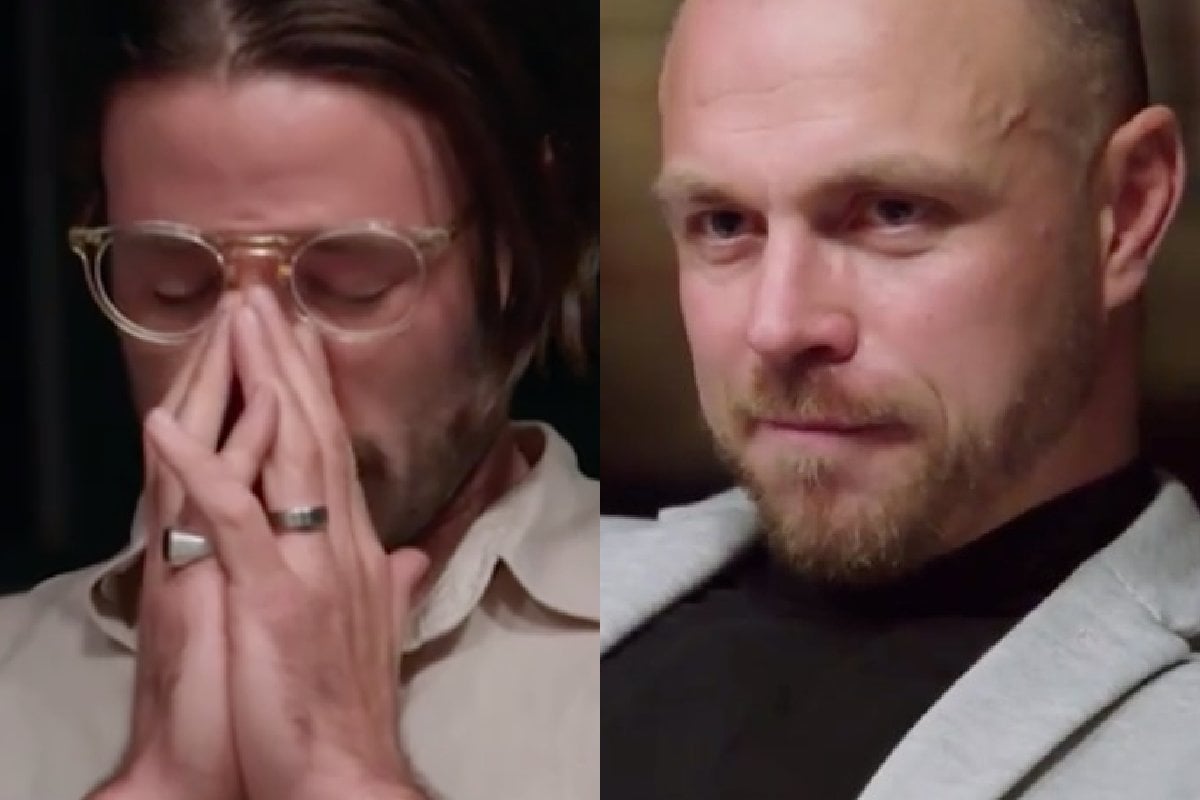 To catch up on all the MAFS 2021 recaps and gossip, visit our MAFS hub page.

There's a man we've all met before.

He's a fun guy. Seems like a good bloke. Loves to be the life of the party.

When things are going well, this guy is all in.

But when things turn sour, when there's conflict, when there are tough conversations that need to happen, this man falls silent. He withdraws and surrounds himself with a wall of silence.

It's suddenly too hard, he's exhausted, and he doesn't know what all the drama is about.

Watch Sam tell Coco he needs a woman with boobs. Post continues below.

This guy ducks and runs at the first sign of trouble, making sure to stay silent so the blame couldn't possibly be put on him.

She's the hysterical one, he says, I'm just sitting here.

This guy uses silence as his weapon.

In this season of MAFS, we've met this guy twice already.

First there was Cameron. The ex-military guy who found himself in a cheating scandal which apparently had very little to do with him.

Cam was matched with single mum Samantha in the experiment. But when Coco, another wife in the experiment came to him for advice about her own TV husband, the pair mutually agreed they would have been better suited to each other.

They met up a few times, and the situation came to a head at a dinner party when Coco told Samantha that people were talking about the possibility of Cam and Coco as a couple.

While Samantha told Coco she had her blessing, she was clearly upset this was the first time she was hearing about it. That it was Coco who'd told her, not Cam.

When asked about it, Cam sat there silently and would only weigh in to say that he was still a married man and wouldn't do anything to disrespect his wife.

As his wife cried and placed her wedding ring on the table - and as Coco sat beside her, mortified - Cam remained silent.

They were the hysterical women, you see, he was just the rational man stuck in the middle.

Read: Sam, Bryce, Cam and the hypocrisy of the men on this season of MAFS.

After Cam left the experiment, another Silent Man emerged.

When we first met Brett, he seemed like a down-to-earth, sensitive, leftie bloke. The kind of guy you could feel safe around. He's in touch with his feelings you see, he doesn't adhere to bro culture.

Brett was matched with Booka and the pair immediately hit it off. It seemed like they might go the MAFS distance.

Then the troubles began.

Booka wasn't a fan of some of the inappropriate jokes Brett was making (which interestingly weren't shown on the show, when in the past they've shown a man rub a woman's toothbrush around a dirty toilet bowl).

Brett complained Booka was too self-involved.

Booka wanted to go deep and Brett wanted her to lighten up.

Then fellow participant Patrick sent the couple a 'feedback letter' in which he told Booka she believes the world revolves around her and she should focus on her husband more.

It didn't go down well.

Booka knew Patrick's opinion of her was entirely formed from what Brett had been telling him. But when she attempted to speak to Brett about it, he told her he thought they should just move on. Leave it in the past. Lighten up. Have a bit of a laugh.

The situation came to a head at last night's dinner party.

As Booka attempted to get to the bottom of what Brett had told his mates in the experiment, how he actually felt about her, Brett closed up.

He pleaded with her to "please stop".

When Booka became emotional at the dinner table and said her marriage had been "ruined", Brett sat silently beside her.

"I don't even want to do this anymore," he said after Booka explained to the group it would be hard to stay in the marriage after finding out what her husband really thought about her.

After minutes of awkward silence, Brett finally admitted he agreed with what was said in the letter.

Booka then apologised. He didn't apologise back. He took no responsibility for the demise of their relationship. He sat there silently.

"I feel so exhausted. So exhausted," he later told the camera. "I'm questioning everything and I can't see any way forward."

At the first sign of trouble, Brett put up his silent wall and there was no way for Booka to push through it. She couldn't go under it, she couldn't go over it.

The Silent Man often goes undetected. In a room full of Bryces, the Bretts and Camerons seem like really good blokes. They're not shouting, they're not picking fights.

But their silence is their weapon.

Their silence does exactly what they want it to do - it paints them as the innocent victim and their partner as the hysterical one, the one who wants to escalate the conflict.

How can you blame Brett when all he wants is for Booka to lighten up? Move on. Have a good time.

How could you criticise Cameron when he sits there and says he doesn't want to do anything to disrespect his wife?

Thankfully, this season in between the Bryces we've seen glimpses of the Bretts and the Camerons, of the silence some women face in their relationship every single day. How that silence makes them seem like the irrational ones. How that silence turns them into "crazy ex-girlfriends".

And how sometimes silence can be just as powerful a weapon as the yelling and the shouting.

krispy a month ago

Reply
Upvote
2 upvotes
Brett said he wanted someone he could have deep and intense conversations with.... except then he didn’t.  lighten up Booka, you’re being too serious Booka, you should smile more, be more light-hearted, hey I know a joke where Patrick and I pretend we’re a gay couple, it’s hilarious ! And Cam... what an absolute gutless wonder. I can’t believe I’m actually commenting on this show, omg....
zaky a month ago