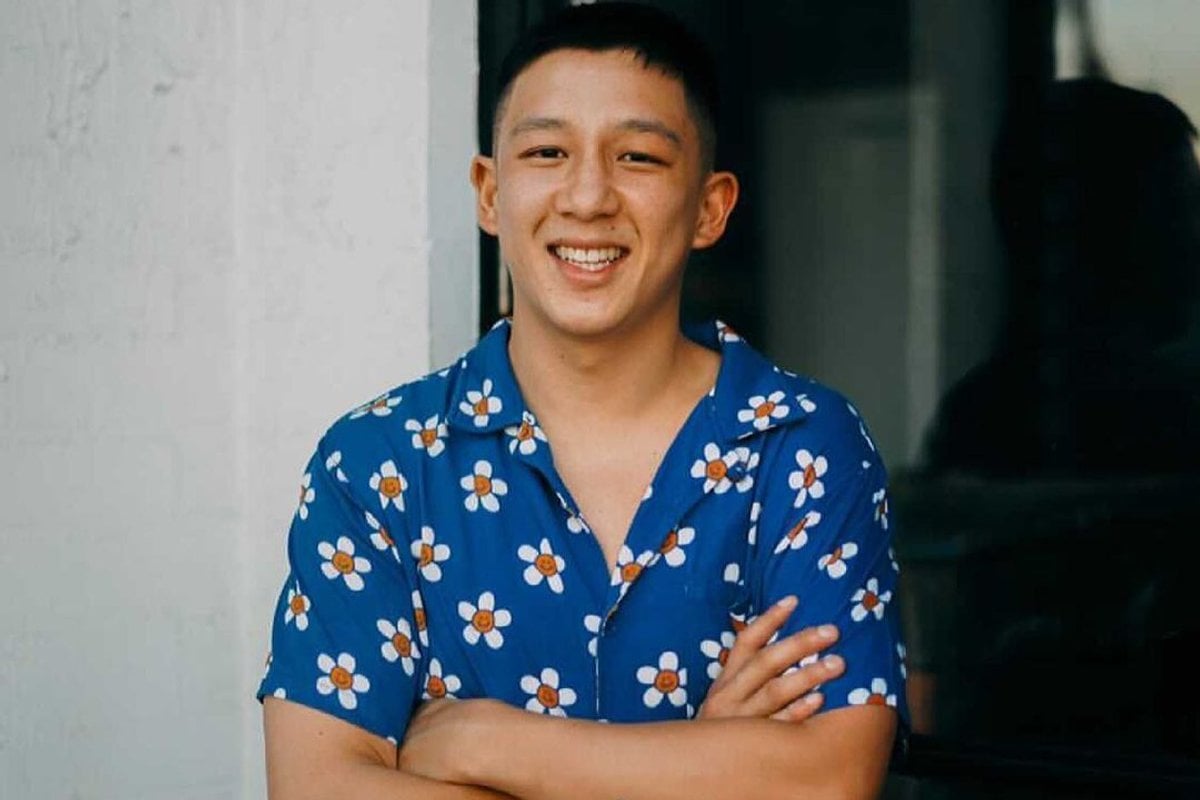 Brendan Pang is one of those faces you remember from reality TV.

The dumpling chef from Perth, Western Australia, first appeared on MasterChef in 2018 and then returned last year for the all-star season, MasterChef: Back to Win.

While we all remember Brendan for his infectious smile and happy-go-lucky attitude, the 28-year-old has gone through some pretty life-changing moments in the past two years. And we're not just talking about MasterChef.

Brendan Pang came out to his family when he was 24 years old. Speaking to Mamamia, he explained why he waited that long.

"I think for me it was a bit more of a struggle than others because I was part of two minority groups," he said. "I come from a Chinese-Mauritian background and also being born in Australia, that in itself, was a struggle growing up."

"My family spoke Creole, which is like a broken French but I look more Asian. That was really hard to manage," he said.

"And then throughout my teenage years, growing up, I really struggled coming out. Going to an all-boys school and being around guys that are really masculine and sport-focused, not really food or being creative... it was quite a big struggle."

Moments before Brendan got on to the plane to film MasterChef in 2018, he told his mum he was gay.

"It was quite a special moment," Brendan told Mamamia.

"It was in the car on the way to the airport to go to MasterChef and I was like, 'I'm about to turn 25, I've never come out to my family, I might be filming the show for the next six months and I don't know when I'll be home next' so I had a lot of emotion running through me and I told Mum in the car."

"She was incredible," Brendan said.

"She was really calm and was like, 'I know, I've always known and it doesn't really matter to me. I'm still your mum I'll always support you.'"

Brendan also explained how his family and friends found out.

"It was kind of funny because I jumped on the plane and headed to MasterChef... and you're kind of gone, you're cut off from the rest of the world," he said.

"So I said to Mum, 'I'm happy for you to share it with my brother and all that because I might not see them for the next six months.' And it's not fair to tell her and have that on her shoulders.

"And I came back and everyone was really embracive and didn't treat me any differently," he said.

Brendan came into the 2018 season of MasterChef having just quit his job in Perth and come out to his family. As he explained, that made all the difference.

"I think that's probably why I could really go into the show and not have anything weighing me back," Brendan said.

"I didn't have a job weighing me back, I didn't have anything back in Perth and I just came out to my family so it was almost like I had a superpower.

"I just went into it and I'm really happy with how I did," he added.

A year on, in June 2019, Brendan came out to his Instagram audience.

"It was scary, for sure," Brendan admitted.

"I think my public appearance has always been about food and I kind of maintained that... It's annoying to have to tell everyone that you're gay or saying that you're straight or identify as who you are but I just put it out there. I was quite anxious but surprisingly I've had a really positive response," he said.

While Brendan's experience was overwhelmingly positive, that's not the case for everyone.

That's why Brendan partnered with Snapchat on the International Day Against Homophobia, Biphobia, Interphobia and Transphobia (IDAHOBIT) yesterday to launch new AR Lenses highlighting the challenges faced by queer youth from multicultural backgrounds.

Since 2019, Brendan's been in a happy relationship with his boyfriend, Nick Fimognari.

"I met Nick online... we're coming up to our second anniversary," Brendan shared. "He works in hospitality so we get along really well."

"Separate from that, Nick has been supportive of everything I do and my career," he added.

Brendan also shared advice for anyone struggling with their identity or sexuality.

"The most important thing for me, in terms of my coming out story, was stripping my perception in terms of being different is not a bad thing," he said.

"Being confident in who I was and embracing those differences, I've started to see [them] as a strength, like what I said before... almost like a superpower.

"You go through all these things and they make you stronger. That's the most important thing."