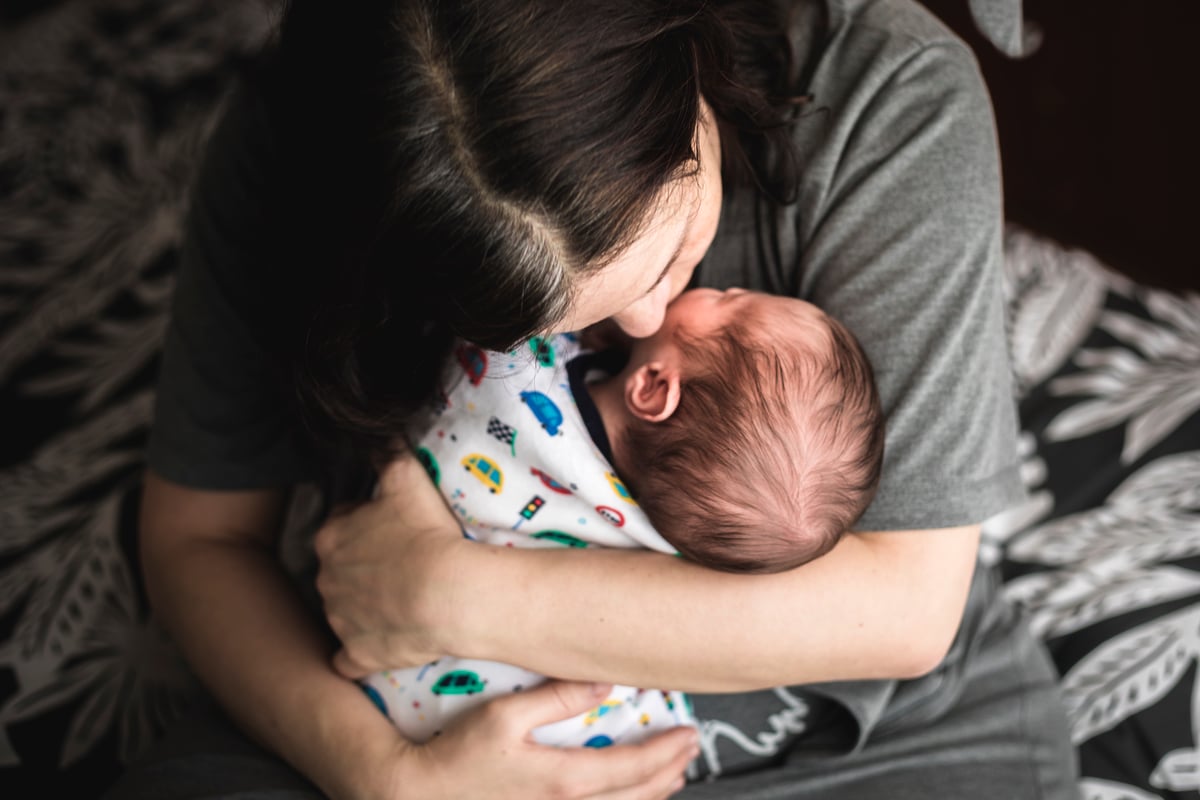 "Have a look at that guy sitting out in the waiting room. And the woman beside him too. What do you think it says on their resume? Breast or bottle fed?"

Early in my first pregnancy, this was one question my obstetrician asked me when we were discussing breast versus bottle feeding.

While there are undoubtedly many proven benefits to breastfeeding, he was indicating that giving babies formula did not necessarily have significant long-term impacts on adult health or wellbeing.

When have you ever looked at another adult human being, trying to work out if they were breast or bottle fed? My guess is... never.

Watch: Introducing The Delivery Room, the Mamamia podcast about all things birth. Post continues after video.

While I hadn’t had kids yet, I had spoken to a handful of Australian friends and family about this issue. They held polarising positions, either being adamant that ‘breast is best’ (no matter what, basically), or they felt an immense amount of pressure to breastfeed when they could not or did not want to.

One suffered from horrific and ongoing mastitis. Another did not produce enough milk. And a colleague of mine simply revealed, without apology or embarrassment, that she found breastfeeding repugnant and was so much happier for not having to go through with it.

I wanted to breastfeed my first daughter and did so successfully for about three months. Sure, it was exhausting physically and mentally to be the only person who could feed her (apart from the odd bottle of breastmilk), but I soldiered on.

I began showing signs of postpartum depression. My milk dried up, which is a common but rarely talked about side effect of increased stress and anxiety, coupled with a lack of sleep.

I consider myself lucky to have had a maternal nurse that immediately put my daughter’s wellbeing first, instead of pushing me to keep breastfeeding.

"Tal, she’s crying because she’s starving. You need to stop breastfeeding and give her a bottle."

Once I felt like I had been given permission to stop breastfeeding, my baby was happy and healthy. I had one less thing to worry about in the fog that is new parenting.

Fast forward three years, I am once again sitting in my obstetrician's room.

"I don’t think I am going to breastfeed this time. I'm worried about my medication transferring to the baby," I reasoned.

As always, my obstetrician was supportive of my decision.

Except this wasn’t really about contamination fears.

I thought it was. I said it was. But once I could be honest with myself, I realised it wasn’t.

Sure, I take medication of which miniscule amounts could transfer to the baby via my milk, but the evidence of long-term impact is not thought to be substantial according to the doctors I've worked with.

The truth is, having suffered from depression and anxiety, I truly feel that bottle feeding would be the better choice for me. My husband is taking six weeks leave and will be an equal partner in the feeding duties, meaning I can have long periods of restfulness. I can leave my baby with my parents or husband for more than an hour and have time to recharge. I will not need to spend an hour using the breast pump only to produce a small bottle. I can maintain my relationship by spending meaningful and significant alone time with my older daughter without worrying about being home for feeding.

I know that bottle feeding is the best decision for my mental health, and subsequently for my baby and family.

So then why do I feel guilty? Like I’m taking the 'easy way out'?

Why did I feel the need to justify my choice by convincing myself that this was about my medication, rather than my sanity?

We live in a society where health professionals, the media, and the majority of mothers promote 'breast is best' - without considering the potential costs.

At the risk of the vilification I will receive from writing these words, it is time we started recognising that formula is not equivalent to some home made bone broth for newborns.

It is the next best thing. It's time we look at mothers’ psychosocial needs, and helping them make the best decision to suit their circumstances.

Tal Slome is a mother of one (almost two!). She is a teacher living in Melbourne. Her passions include talking, watching the ABC, family and sunflowers. She writes on a range of parenting related topics.

Reply
Upvote
Worth mentioning on behalf of new mums of premature bubs - if you have excess breastfeeding supply (particularly in first four months where an extra pump is more possible) consider donations of breastmilk to local bloodbank, to help others babies. Extra pump in the evening also increases supply. With covid vax just around the corner passing on / sharing some immunity is a extra benefit from donations.
E
ella27 8 months ago

Reply
Upvote
2 upvotes
Congrats to all new mums for making whatever decision works best for their family and themselves.  Ultimately a baby that's fed ,contented and loved is the goal. I'm grateful i was able to easily and happily breastfeed both my babies with good support but there are some decisions I made myself to enhance my experience.  I refused to use a breast pump (personally think they are gross and hard work) so if I wanted to go out or needed a break I just made up a formula bottle. Easy and no issues for my bubs. I intuitively allowed both my babies to start weaning when they were ready (one did it sooner than the other) without following any rules. Maybe a nudge here and there. Either way the whole experience for me was stress free. My ultimate advice ......follow your instincts
D
daijobou 8 months ago

Reply
Upvote
1 upvotes
@ella27 I am completely with you on this, pumping is the absolute worst. Painful and yet takes so long just sitting there unable to do anything. At least breastfeeding gets quicker as they older and you get to cuddle your baby. My first who was the only one I pumped with ended up weaning at 5 months waaaay earlier than my other two.
News
General
Opinion
True Crime
Politics
Sport
Explainer
Entertainment
Celebrity
Reality TV
Movies
TV
Books
Rogue
Royal
Lifestyle
Beauty
Fashion
Weddings
Home
Wellness
Health
Fitness
Travel
Food
Parents
Before The Bump
Pregnancy
Baby
Kids
Teens
School
Parent Opinion
Work & Money
Money
Finance
Career
Lady Startup
Relationships
Sex
Dating
Separation
Friendship
Family
Real Life
Couples