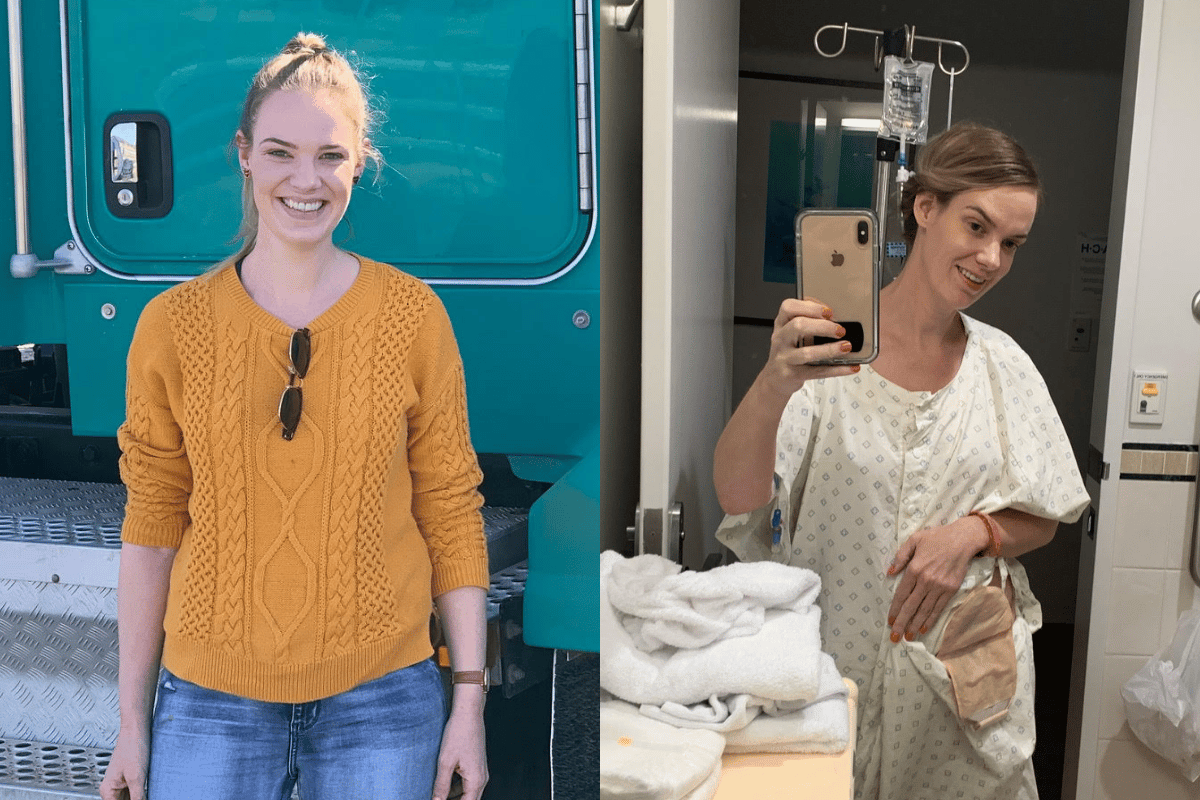 For Melissa Laan, the signs were small and easily dismissed; an upset stomach, frequent trips to the bathroom, and problems eating some food.

"I passed it off as one thing or the other like stress or just being a mum," the 39-year-old told Mamamia.

Then one day, while working in administration at a Queensland hospital, she started feeling unwell.

"Drinking water makes me sick," she told nurses in a passing comment at work.

"That seems strange," they replied. "It's probably not the water."

Not thinking too much of it, Melissa, who was in her mid-thirties, brushed it off as she had done with other symptoms for 18 months.

Little did the mother-of-five know she had a tumour in her bowel.

At the time, bowel cancer, which is most commonly diagnosed in people over 50, was the furthest thing from Melissa's mind.

Even when Melissa sought medical help after noticing bleeding, doctors told her "it's probably haemorrhoids".

"I sort of felt almost silly for having wasted their time," she shared.

It wasn't until she started passing mucus that alarm bells started ringing.

Melissa later presented to the hospital after throwing up what resembled Coco Pops.

"That's where you're actually throwing up, grainy sort of coffee grinds sort of poo. [It's] pretty gross."

Doctors told her she had a bowel obstruction and would need to undergo a colonoscopy in November 2018.

That's when they found a five centimetre polyp in her bowel.

"At five centimetres, certainly there were concerns," she shared. "That’s where I started going to the place where I thought here we go, this is really bad... this is my last Christmas with my kids. You go down a bit of a dark path there."

Just two weeks later, Melissa had an MRI and the polyp had grown to nine centimetres.

By the time she had a surgery (known as TAMIS) to remove it in January, doctors pulled out a 26 centimetre polyp, which was confirmed to be cancerous.

"It's scary to think how fast it was growing."

"At the time, it was the second largest tumour that they've removed through the TAMIS procedure."

Looking back, Melissa says if it wasn't for her treatment, she doesn't think she would have made it to 50 - the age when the National Bowel Cancer Screening Program sends every Australian a free bowel screening test kit.

"Growing at that rate... no one can really say how much longer I had up my sleeve before things turned out very, very different."

It’s why she says early diagnosis and access to screening tests is so important.

"If it had been treated early, then it would have just been a polyp that they would have removed at the colonoscopy, and that would have been done."

Still, she's grateful she caught it early enough to have the tumour removed through a minimally invasive surgery.

It also meant she was able to make it back home for her children's first day of high school and kindergarten.

"I'm just incredibly fortunate that they got it when they did because once it starts to metastasize… it's a very different outcome with how much time you have to spend in treatment and away from family." 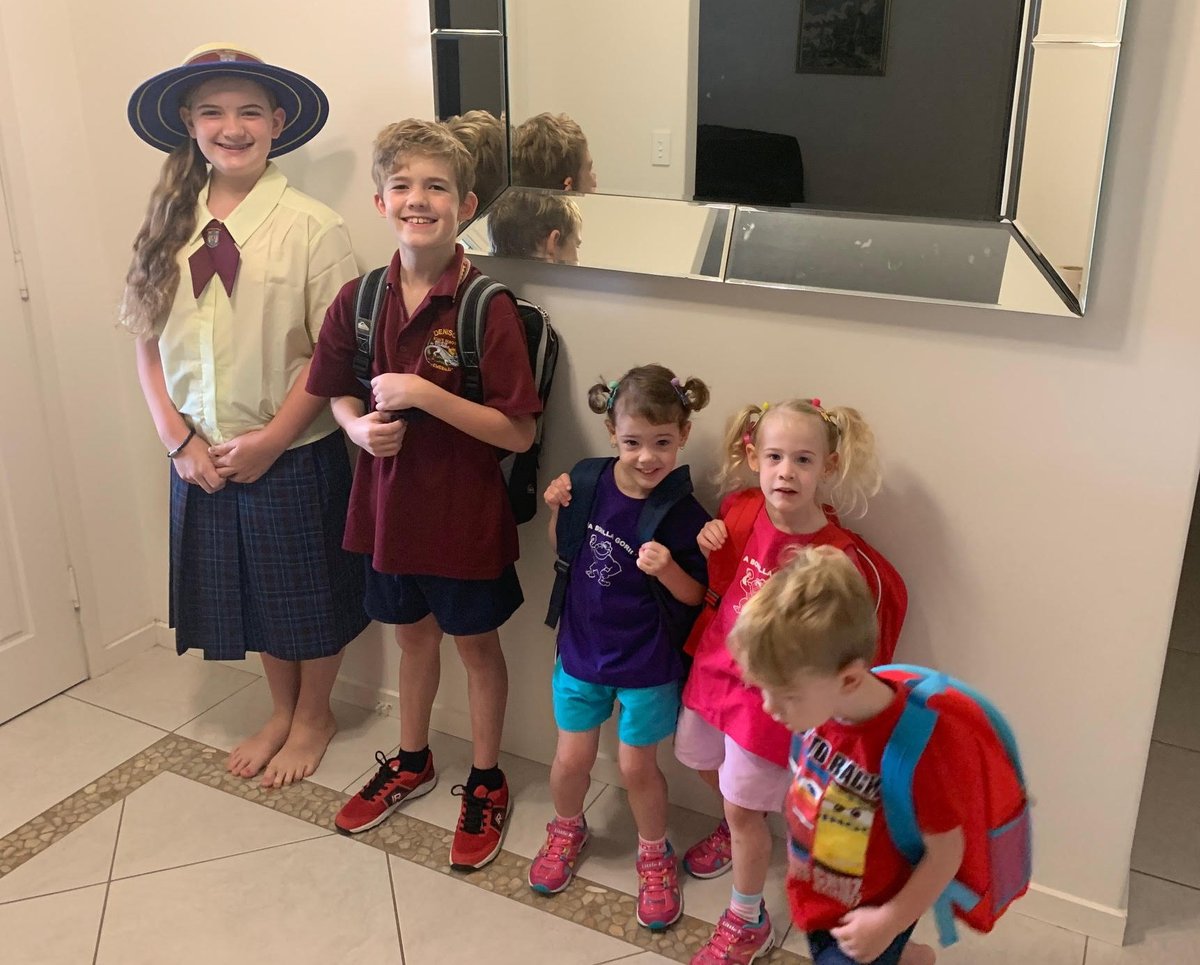 After the surgery, Melissa said the recovery was "pretty straightforward", however, she did develop a few additional complications.

"I had peritonitis and as that sort of progressed, I went septic. At that point, my lungs collapsed and [they] popped me in a coma."

After waking up from the coma a day later, Melissa discovered she had been fitted with an ileostomy bag, which was reversed after six months.

"I think I had some of the only three-year-olds that could say ileostomy," she joked. 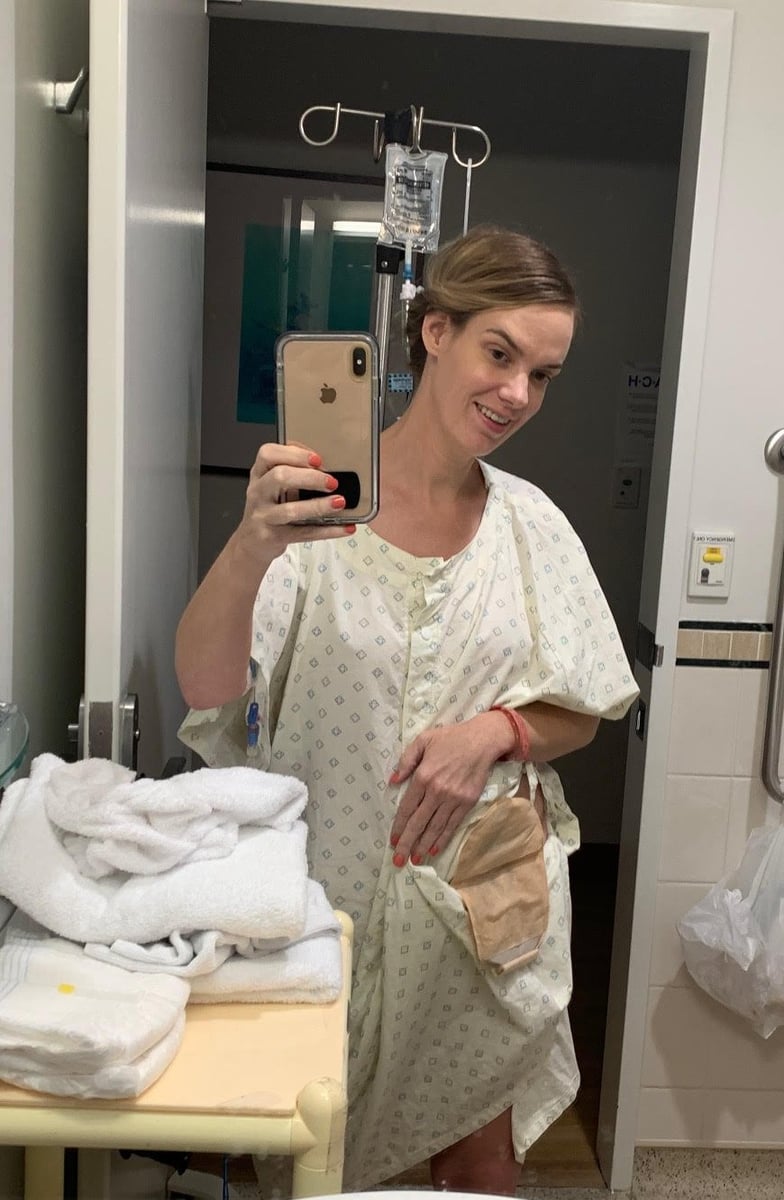 Melissa after her ileostomy in February 2019. Image: Supplied.

"I just remember being in hospital and thinking if I get through this, I'll do something to try to make a difference," she said, explaining her decision to now work as a Senior Health Advisor at Central Highlands Regional Council in Queensland.

"When I had the Ileostomy, I was like 'right, what can I do?' It wasn't what I wouldn't be able to do anymore. I thought I'll swim, I'll get my truck licence, I'll go flying.

"I don't know whether it was for myself or for my kids, but I thought this doesn't actually stop me.... besides a few exploded ileostomy bags, which is not pleasant. But besides that, it really made me realise I've been given this new chance and this new opportunity." 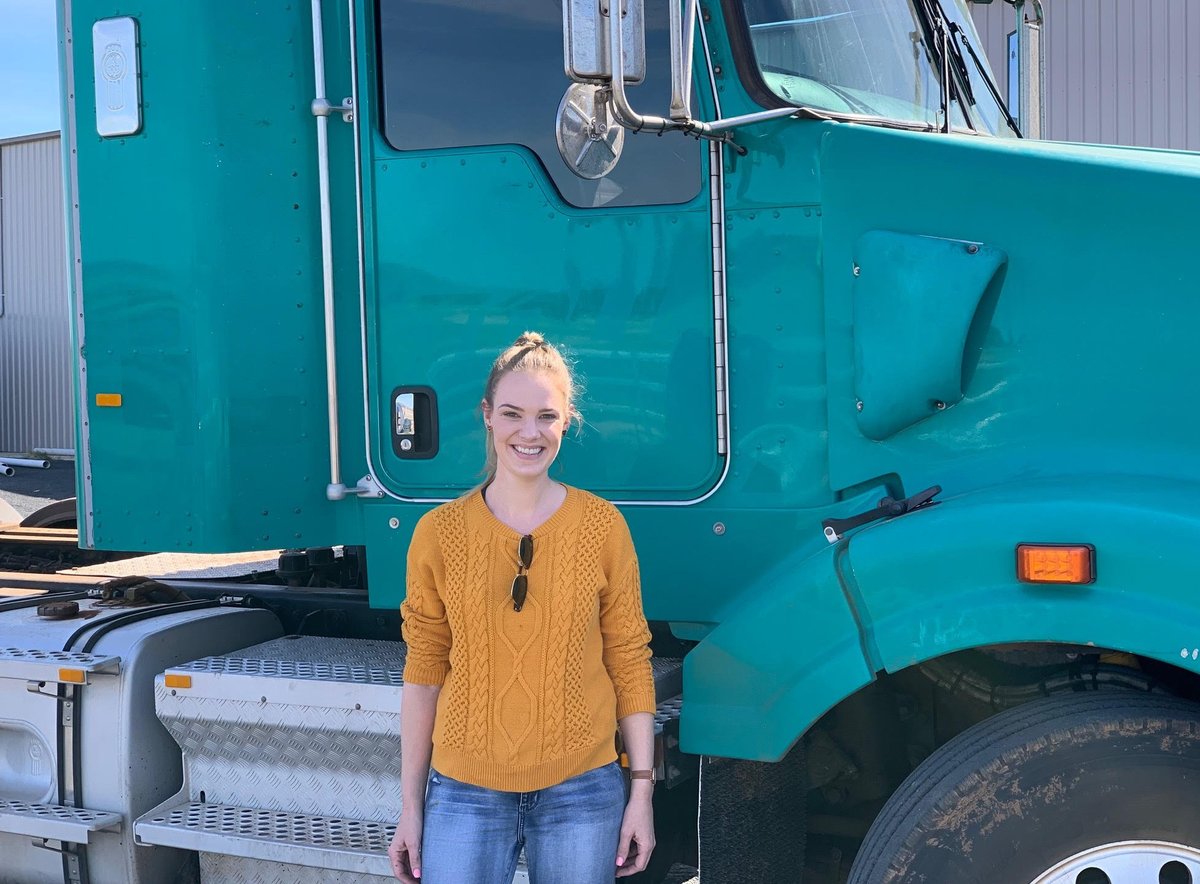 Melissa learning to dive a truck in April 2019. Image: Supplied.

Last September, Melissa went back to the hospital for her final checkup and was given her five-year clearance.

"They [the doctors] are satisfied that as long as I keep an eye out for any warning signs or symptoms, I don't need to have another colonoscopy for five years."

It’s these warning signs that Melissa wants everyone - particularly parents - to be aware of.

"Parents really need to put their health as a priority.... As parents, we almost pride ourselves on running on empty, and it's particularly dangerous with certain illnesses where time makes a difference."

The 39-year-old also wants to see the government provide bowel cancer testing kits at an earlier age or make them cheaper to access so young people can get diagnosed sooner.

"It's just unfortunate that we still take the stand that bowel cancer is an older person's illness.

"If there was more awareness that young people can get bowel cancer too, more of us could possibly get treated sooner and there'd be a lot less disruption through the late diagnosis, which affects whether you're going to be spending a lot of time in the hospital or just a checkup every five years."

A
aladieslabour a month ago

Reply
Upvote
The problem arises when testing is available but people don't take advantage.  Have just heard my father-in-law has only days left to live, he was diagnosed with bowel cancer the middle of last week (last day of May according to relatives) and has been made comfortable and sent home to die.  Yet I can't help feeling that he must have received the tests they send out and simply ignored them for it to be so advanced that he only has days left to live.  No point in sending out tests if people simply ignore them, and while many don't equally many do - and it seems my father-in-law was one of them.
M
mamamia-user-482898552 a month ago

The 39-year-old also wants to see the government provide bowel cancer testing kits at an earlier age or make them cheaper to access so young people can get diagnosed sooner.

Whilst her motivation is well-meaning, it's also misguided. Lowering the age for nation-wide screening - in the hope you pick up the tiny fraction of people in the general population who fall outside of the majority - is not cost-effective and also leads to a lot of investigations for false positive results. Further, colon cancer in younger people is often biologically different and as such a faecal occult blood test (ie the current screening tool used in older people) is not necessarily the best way to find it. Basically the public health dollar can only stretch so far. Lowering the age of a national screening programme would cost literally millions of dollars.
C
cat a month ago

Reply
Upvote
1 upvotes
@mamamia-user-482898552 making tests cheaper to access is perfectly reasonable, especially for people with a family history. Subsidised tests only need to find a few cases to be worth their money, especially with hospital and GP resources so stretched. If we are serious about preventative care people should be able to be screened for any disease for free at any age. If they are motivated to get tested we should embrace that.

Reply
Upvote
1 upvotes
@rush With the risk of oversimplifying, colorectal cancer arising in younger people more commonly exhibits a more aggressive phenotype and has a greater rate of genetic alterations. In comparison, colorectal cancer in older people can be more indolent, so that even though it can be picked up when symptomatic (ie bleeding enough to be detected in a screening test), it is still potentially curable when diagnosed. Basically it's a little like comparing apples to oranges. It doesn't necessarily follow that a similarly "screen detected" cancer in a younger person would mean a gain in survival at a population level. Screening strategies need to be tailored towards the peculiarities of the cohort being screened in order to make a cost-effective and meaningful difference.
G
gunny.wig.0a a month ago

Reply
Upvote
@mamamia-user-482898552
It costs the health system $1.1 billion to treat bowel cancer each year and on average costs $120,000 per patient to treat, the later it is detected the more expensive and invasive it is. On top of that, it costs businesses an average of $580 per day an employee is away which adds up to tens of thousands of dollars an employee is being treated for cancer. Finally, the out of pocket costs add up to thousands including travel, accommodation and loss of income, as well as costs not covered by health providers, depending on the insured status of the patient. To suggest the lives of young people are too expensive to treat who have their whole lives ahead of them and, if in their 30s and 40s, are likely to have children, is the response of a bureaucratic system that only looks at numbers in a spreadsheet. Behind those numbers are people, families, friends, businesses and government services that share the impact of that person's sickness and possible death. Millions are spent on incredibly expensive cancer drugs that are subsidised on the PBS. It would be cheaper to stop the cancer - often detectable before it even becomes a cancer - than to allow it to go undetected in under 50s. And on top of this, 53% of bowel cancer deaths occur after age 75. The free government test kit program ends at age 74.
News
General
Opinion
True Crime
Politics
Sport
Explainer
Entertainment
Celebrity
Reality TV
Movies
TV
Books
Rogue
Royal
Lifestyle
Beauty
Fashion
Weddings
Home
Wellness
Health
Fitness
Travel
Food
Family
Before The Bump
Pregnancy
Baby
Kids
Teens
School
Parent Opinion
Work & Money
Money
Finance
Career
Lady Startup
Relationships
Sex
Dating
Separation
Friendship
Family
Real Life
Couples