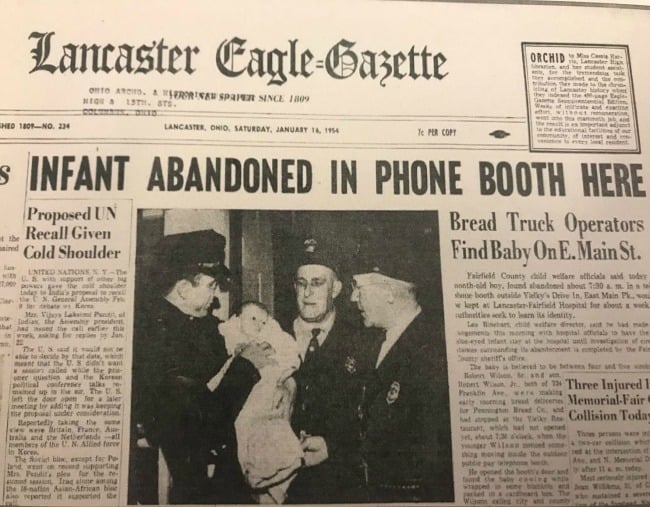 He was nicknamed the “Booth Baby” and “Little Boy Blue-Eyes”. The two-month-old baby was found abandoned in a phone booth in Lancaster, Ohio, on a cold January morning in 1954. He’d been lying there, in a box, for several hours, before he was discovered by chance. A bottle of milk had been left next to him.

It’s taken until this year to find out who abandoned him there, and why.

The baby was front-page news in The Lancaster Eagle-Gazette in 1954. The two bread delivery men who found him, Robert Wilson Sr and Robert Wilson Jr, had been making an early-morning delivery to a nearby restaurant when Wilson Jr noticed something moving in the phone box.

“He opened the booth’s door and found the baby cooing while wrapped in some blankets and parked in a cardboard box,” The Lancaster Eagle-Gazette reported.

Before long, authorities were flooded with offers from people wanting to adopt the baby.

“Little Boy Blue-Eyes, as he is called, is enjoying a wave of unprecedented popularity,” the newspaper commented a week later.

The baby was being kept in a private room at the Lancaster-Fairfield Hospital, and was reported to be in “excellent shape”. It seems the abandoned boy was charming everyone who saw him.

“Many of the nurses and administrative personnel of the hospital have said they’d like to take the baby home,” the newspaper went on.

In the end, the baby boy, given the name Steve, was adopted by Stanley and Vivian Dennis. The family moved to Arizona. Dennis’s parents told him from the age of three that he was adopted. But it wasn’t until he was 15 or 16 that he heard the story that he had been abandoned.

A couple of years later, he decided he had to see the phone booth for himself.

For years, Dennis didn’t concern himself too much about who his birth parents might be. He joined the Peace Corps, became a chiropractor, got married and had two kids.

It was his kids, when they reached their teens, who pushed him to find out more.

“They’re always really curious about, ‘Dad, you know, where are you from? You know, like, what is your heritage?’” he said in an a video interview with the Arizona Republic.

Dennis did the DNA test through Ancestry.com. Three months later, he received his results. Dennis discovered that the website had tracked down his first cousin.

“He wrote an email to me and said, ‘You know, I think I know who your mother is. We’ve heard throughout our lives that there was a baby we were related to who was left in a telephone booth, just kind of like a hidden secret.’”

Dennis, who grew up an only child, soon found himself in touch with his half-sister.

She revealed that his birth mother was still alive and living in Baltimore. Aged 85, she struggled to remember the details of what had happened, but gradually, most of it came back to her. She was 18 years old when she gave birth.

“The father said, ‘Well, I’ll marry you if you get rid of the baby.’ And apparently he took the baby, me, and put me in a telephone booth. After the baby was gotten rid of, myself, he disappeared.”

The woman married again and had two daughters.

Dennis is planning to visit his birth mother in Baltimore later this month. But he says he won’t be pushing her for too many answers.

“Whatever she feels comfortable saying to me, I’ll take. It’s more than I had before.”

“My true parents, of course, were my adoptive parents,” he explains. “It would be almost impossible for me to think otherwise.”

I wonder what the reunion will be like with his birth mother. I can’t imagine how terrible going through all that was for her. The poor girl

Yes the poor girl, it was a different era women often had no support. There is no mention of the father pity he isn’t still alive and located then Steve could meet up and tell him what he thinks. Thank goodness he was adopted well and has had a good life.

So was his name Steve or Dennis???

Steve is the first name, Dennis the surname