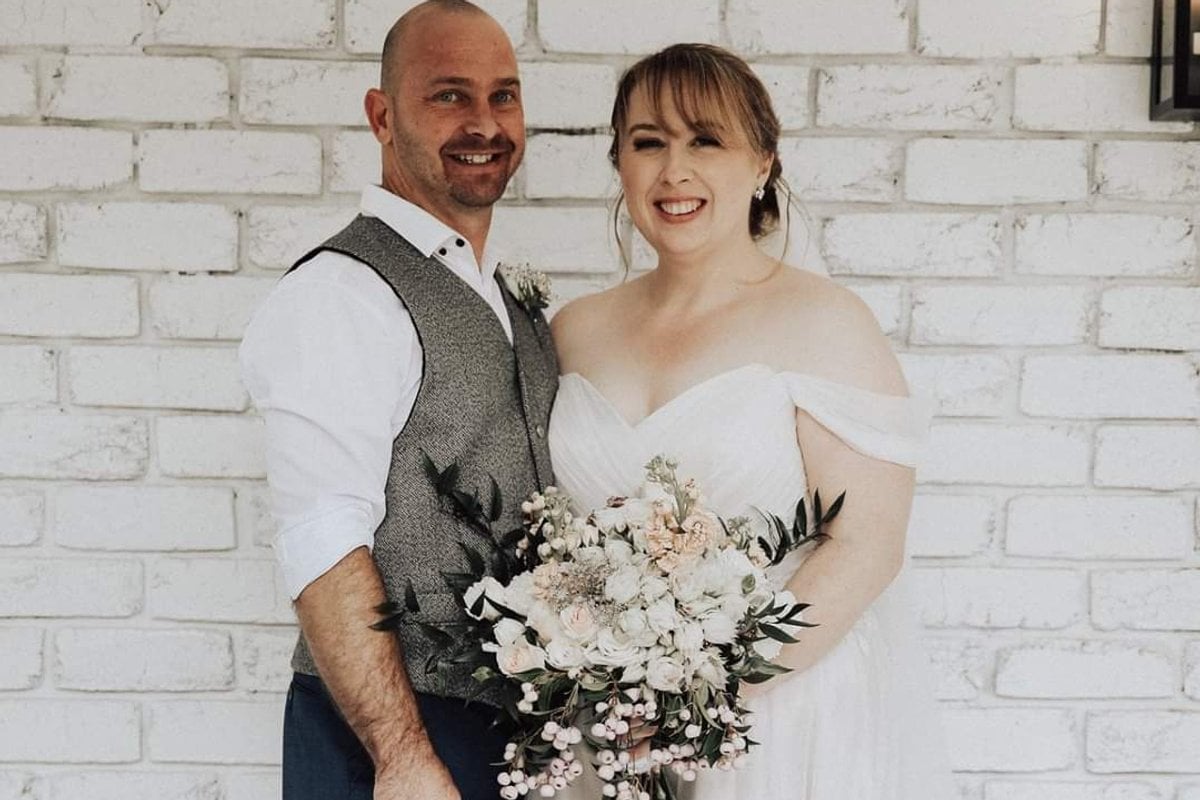 Our engagement was an enormous surprise to me. Lance wasn’t really into marriage and I didn’t need a wedding. I thought that wasn’t where our lives were headed. But he surprised me.

We were down on the Great Ocean Road, on holiday from Brisbane. At Apollo Bay, we were standing out on some rocks and there was this huge supermoon coming up over the ocean. He was standing behind me and he had his arms around me and, in very him fashion, he just whispered in my ear, “I reckon you should marry me.”

Our original plan was to get married in May last year, nine weeks after we got engaged, because Lance’s father has lung cancer. We wanted him to be able to enjoy the wedding with us.

Watch: How much should a wedding dress cost? Post continues below.

I was thinking, “Oh my God, I’ve got to get a dress!” So I went into stores while I was in Melbourne.

It was not great, going into stores as a plus-size girl and having the pressure of believing I had to buy something off the rack.

Even though I’m on the smaller end of plus size, it was still impossible. I could barely get my leg into most of them. Most of the sample sizes seemed to literally have come off models on runways. It was very, very difficult.

It’s not that the staff were awful, but you could just tell that they didn’t really want to do this because they knew they weren’t going to be able to help me. They were a bit like, “Oh, this is not going to work.”

For the most part, they’d say, “We can do up to a 12, maybe a 14.” But the sample sizes were smaller. So I was standing in front of a mirror holding dresses up against me because I couldn’t get them on my body. Sometimes I could sort of get my body into them but they definitely weren’t doing up around the back.

If you want to look in the mirror you have to come out, and you’re then out where the other brides are, and they’re these tall, beautiful, willowy, skinny-looking women who do fit the dresses and you’re standing there going, “Well, I don’t look like that and I’m really embarrassed because this thing doesn’t do up around me and I’ve got my bra hanging out.”

It’s not fun, especially if you’re already feeling a bit insecure. You feel like, “Oh, what are they thinking?” or, “What are they saying?” Realistically, they’re not paying attention to you, but you still feel quite self-conscious.

I had my mum and my best friend with me, and the experience was completely different.

Some things were too big for me, but I was able to put on any dress because when it’s too big for you they clamp it up at the back and they can make it look like it would look in your size.

You walk out and you look in the mirror and I did have a moment – I think it was after they put a veil on me – where I slumped and said, “Oh, come on!” because I could not believe that I could look like that. It was really, really positive.

COVID wrecked our plan to get married in May. We ended up getting married in July, in a rainforest. 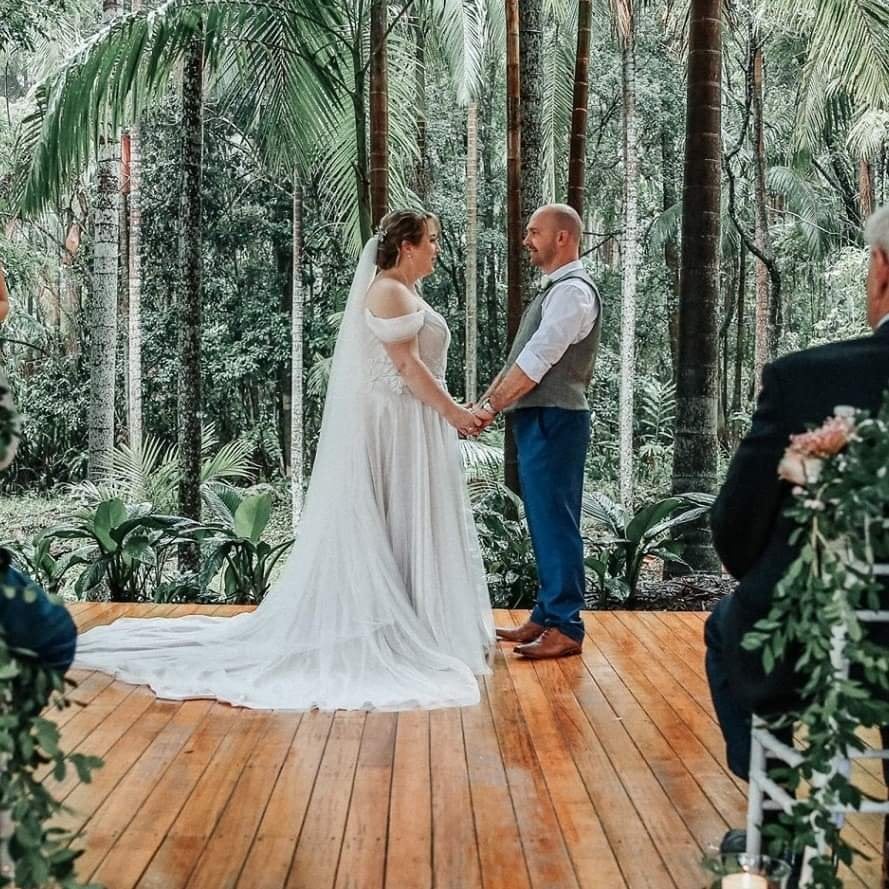 I felt fantastic. I was so comfortable.

When I was in the shop I got my friend and my mum to take lots of photos of me from all different angles. As a plus-size girl, you become very aware of where you do and don’t look good, and generally there’s only one or two poses that you feel like you look okay in.

I knew that in this dress, it didn’t matter where I was photographed from, I felt confident that I would be happy with the way that I looked, and I was. All of our photos came back and there’s nothing that I don’t like. 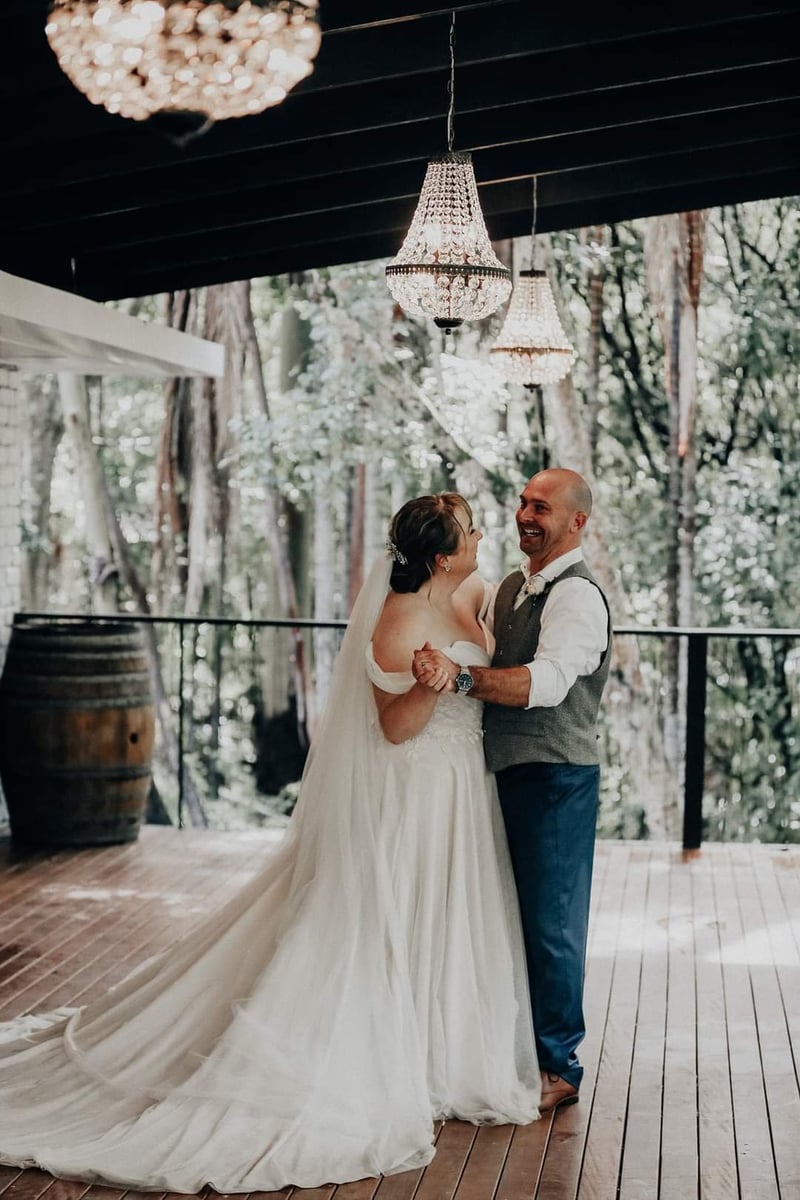 It just really made a difference having a dress that was designed for my body shape. For example, my dress was a strapless dress, but it came up higher on the sides at the back and it was boned so I didn’t get any of the rolls spilling out over the top.

We even got a video done. I’m not someone who ever lets anyone video me because I’m self-conscious about my appearance, but a week before the wedding I spoke to my mum and said, “Am I going to regret not having a wedding video?” and she said, “You will. You need to do it,” so I got one.

I look at that and don’t see anything other than a bride, like every other bride.

And I'm glad I didn't keep going to bridal stores that made me feel like I wasn't good enough. I deserved to find a dress that fit, just like everyone else.

Reply
Upvote
I'm so glad you found Curve and ended up having a good experience. I got married recently in Melbourne and didn't particularly look forward to dress shopping as I'm also not a standard dress size. I was really lucky that I found a dress off the rack that fit me and I felt good in. You looked absolutely beautiful and the photos you shared are stunning.
F
fb75 10 months ago