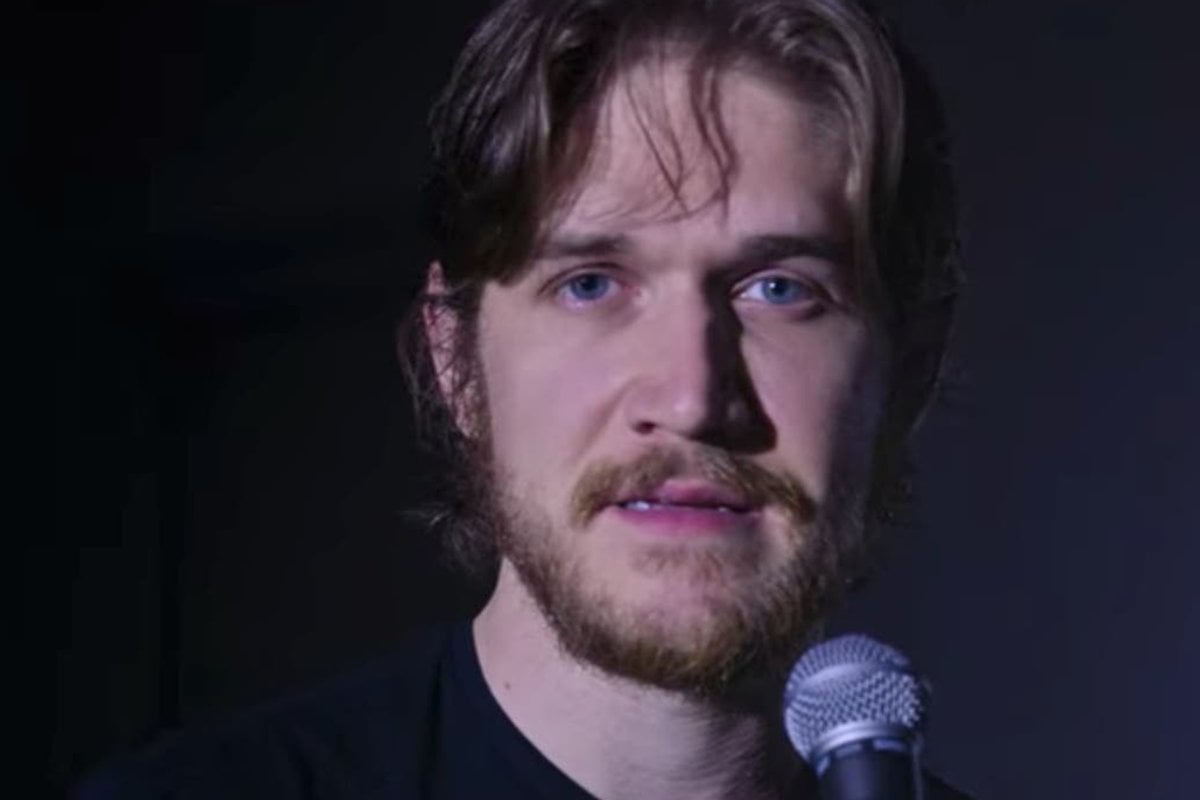 No spoilers. We promise.

Bo Burnham's special does what no one else seems to know how to.

That is - to capture in any meaningful way what the f**k just happened.

Burnham's brand new comedy special Inside has received near universal acclaim, with critics declaring it "a masterpiece", "one of the most sincere artistic responses to the 21st century so far", and "an inspiring artistic achievement".

Watch the trailer for Bo Burnham's Inside. Post continues below.

But let's start at the beginning.

He also wrote and directed the 2018 film Eighth Grade.

What you might not know is that Burnham is an elder in an often derided subset of the entertainment industry.

In 2006, then 16-year-old Burnham uploaded a video of himself singing a funny song in order to share it with his family. YouTube had only been around for a year and no one quite knew what it would become. But quickly, Burnham amassed a fan base, and so he sang in his teenage bedroom in an effort to make people laugh.

The expertise he acquired as an adolescent, singing and recording and editing and directing and engaging, is foundational to what makes Inside so mesmerising.

A film actor or veteran comedian would not have the skills to write, produce, perform and film a show at a time when they cannot leave their own house.

But a YouTuber could.

From his perspective though, it was "the roughest time in [his] life". Burnham suffered panic attacks on stage he attempted to perform through. His anxiety became so acute, he made the decision to step back from performing live to focus on his mental health.

Then, five years later, came Inside.

At the beginning of 2020, Burnham was ready for a comeback. He could perform again. He had things to say. But, as he puts it in the comedy special, "the funniest thing happened".

On the cusp of turning 30, he decided to create a comedy special with no audience, inside the four walls of what is speculated to be his guest house in LA.

He operated the cameras. He controlled the lighting. He wrote the show and performed it to nobody. He wrote and produced the music. Such is a creative and technical feat that has - as far as I can tell - never been executed before.

The show itself has been likened to scrolling through a feed or jumping from app to app, as Burnham jumps between disparate songs, ideas and mediums.

But at its core, Inside is about humanity in crisis.

It's about a year where the only 'outside' for hundreds of millions of people around the world was the internet.

It's about a descent into madness.

There's a fear in the wake of a global catastrophe like COVID-19, that art will attempt to glorify it. How are we meant to capture and communicate what just happened? How will we explain it to our children or our grandchildren?

Listen to Wednesday's episode of Mamamia Out Loud, where I recommend Bo Burnham's new Netflix special. Post continues below.

Inside is gritty and claustrophobic. Burnham holds up a mirror to a culture where, in his own words, "apathy's a tragedy and boredom is a crime".

This is a man who the internet created, but that same internet makes him feel trapped.

Among the questions we're left with at the end, one wonders: Is this truly comedy?

My advice has been not to press play on this special expecting to snort laugh. I didn't. Inside is performance art before it's stand up. It is 90 minutes of television that would have been inconceivable 18 months ago.

Burnham manages to capture the essence of isolation - of "languishing" as The New York Times have termed it. And of how badly technology approximates real-life human interaction.

While I don't have an answer to that, I think the question Burnham truly wants us to ask is: Are we?

As a reviewer for the ABC put it, "Remember in the early days of the global pandemic how people were like 'Shakespeare wrote King Lear during the plague'?"

Inside is our King Lear, a masterpiece that will imprint itself on history.

bo burnham’s #inside is the only content about the pandemic that needs to be made. i don’t want movies romanticizing it, only this deranged masterpiece pic.twitter.com/xqg7cpo78r

7 minutes into "Inside" and Bo Burnham is a fucking beautiful person
Also these whiteboards are on point pic.twitter.com/S0s7Cf92PI

is bo burnham’s “inside” comedy? debatable. is it a masterpiece? undoubtedly. pic.twitter.com/mZ867soqqN

I get worried about art influenced by the Pandemic-it will just feel like a cynical, artificial cash grab, not even coming close to capturing the mood, anxiety and tonality of what it was like to go through it.

So when I say Bo Burnham: Inside fucking nails it, believe me pic.twitter.com/8EyedjDAY7

just finished Inside by Bo Burnham and this was the most accurate description I've seen of it so far pic.twitter.com/VrC0Cvx8bF

Just watched INSIDE by @boburnham
I feel in awe, unsettled, understood, alienated, compassionate and thrilled by what he made this year. pic.twitter.com/lWKrQnR3LH

Holy sh*t, Bo Burnham’s new special, “Inside”... he has the most singular blend of comedy and poignancy I’ve witnessed. It’s not too often I go from laughing at something to taking a break because it got TOO real. Also, probably some of my new favorite songs from him.

I'm going to say I loved Bo Burnham's INSIDE because there aren't enough superlatives in the world to capture how absolutely floored I am. He just took his craft as a visual storyteller and comedian to the next level. pic.twitter.com/mAQ3eE51q4

Bo Burnham - Inside is hands down the most painfully beautiful special ever and I can’t stop thinking about it... all of the time.

"Inside," the new @boburnham special on Netflix, is so so so good. Someday when people ask me what the pandemic was like, for our mental and emotional health, I will tell them to watch that special. And then I will say that it was like that, but less funny.

You can watch Inside on Netflix.