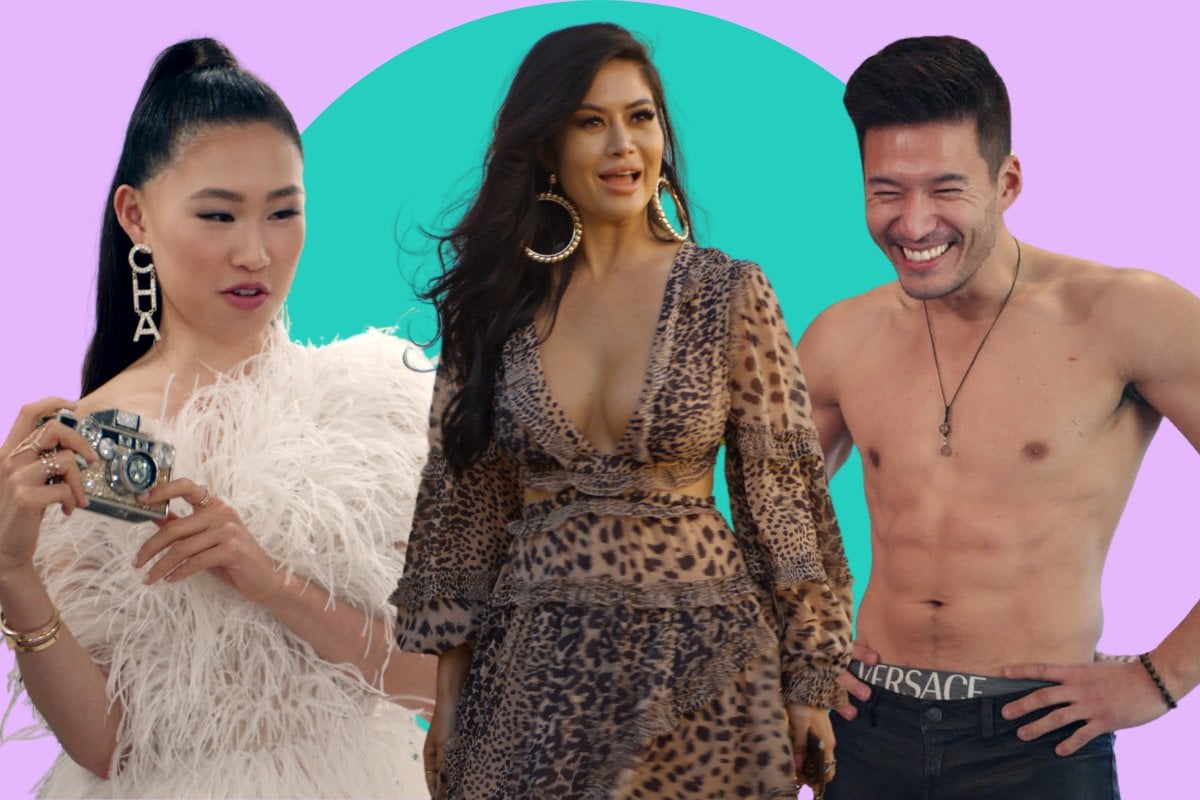 Netflix's Bling Empire has been described as Crazy Rich Asians meets Selling Sunset but it's so much more than that.

The reality show breaks the mould when it comes to diverse casting while also delivering one of the most likeable casts on reality TV. It also delivers the penis pump scandal we never knew we needed in our lives, plus not one but two birth parent mysteries.

The reality show follows a group of wealthy Asian American socialites in LA, as they spend money, throw lavish parties and navigate friendships, relationships and their careers. It touches on what it's like living in 2020 when you come from a very traditional family.

Beautiful but simple Kevin serves as the 'everyman' in the series. He was born in South Korea but was raised in Philadelphia by his adoptive parents. When Kevin moves to LA to pursue a career in modelling, he is thrust into a world of luxury penthouses, $10,000 shoes, and exclusive parties.

With the support of his new tight-knit LA community, Kevin starts exploring his roots and finally finds out why his parents gave him up for adoption.

Kane Lim is Kevin's sarcastic best friend, he also happens to be a... billionaire. He mostly serves the role of 'quirky sidekick' in the first season.

Kane was born into a family of wealthy Singapore entrepreneurs who have stakes in the oil, shipping, tanking and real estate industries.

When Kane was 17, his dad gave him a loan to invest in stocks and he made his first million. Now he's living in LA and establishing himself as a player in LA's lucrative real estate scene.

Christine Chiu's husband, who she calls "Dr Chiu", is apparently a 24th generation direct descendant of the Song dynasty.

The couple runs the popular Beverly Hills Plastic Surgery practice together in between throwing lavish parties at their mansion.

As the wife of an heir to a very traditional and wealthy Chinese family, there was a lot of pressure on Christine to produce a male heir. In the first episode, she speaks openly about how her husband's family shunned her until she finally gave birth to a son after trying to fall pregnant for 10 years.

In the first season, Christine and Dr Chiu broach the subject of having another child and this causes a lot of tension in their relationship.

Anna Shay is the heiress to a huge fortune and the reigning queen of the Asian American social scene in LA.

Her only job is being rich, and she splashes around cash, in one particular episode buying an entire new wardrobe for Kevin, without a second thought.

Anna's not one to cross, however, which a few of the younger cast members learn in season one.

Anna's late father, Edward Shay, was the billionaire founder of Architects and Engineers, a defence contracting firm that has worked with the US government on projects around the world.

Kelly Mi Li is one of the few cast members who actually seems to... work. She works as a production company executive and her career appears to be booming.

However, her biggest storyline in season one is her tumultuous relationship with her long-term boyfriend actor Andrew Gray, who, quite frankly, is a bit of a d**k to her. Repeatedly.

Where is her money from?

During the first episode, Kelly explains that she married a wealthy man from China in her 20s. He was later indicted in a multimillion dollar fraud scheme. Kelly's husband is now behind bars and she supports herself.

Andrew is the previously mentioned d**k.

The 33-year-old might look familiar to you, as he starred in Nickelodeon's Power Rangers Megaforce as the Red Power Ranger.

Andrew's main storyline this season is about how he treats Kelly, with many of her co-stars and friends calling out his behaviour.

He doesn't have as much as the rest of the cast and is mostly on the show for his storyline with Kelly.

Kim Lee is a DJ and actor and arguably the most famous member of the cast. She also happens to look like a... Kardashian/Jenner. ¯\_(ツ)_/¯

She was raised by her single mum in California and worked as a model before becoming a DJ. She's also appeared in various reality TV shows in the past including The Amazing Race Vietnam and Vietnam's Got Talent.

Jamie is the youngest member of the Bling Empire cast. The 22-year-old has established herself as a name in fashion with her Instagram profile and YouTube channel.

Jamie's father is billionaire Ken Xie who founded a cybersecurity business with his brother.

Guy is a celebrity hair colourist, YouTuber and musician with over 2.1 million Instagram followers.

According to Guy's Twitter, his mother is Vietnamese, and his father is Chinese.

Guy was born and raised in Tulsa and appears to be self-made.