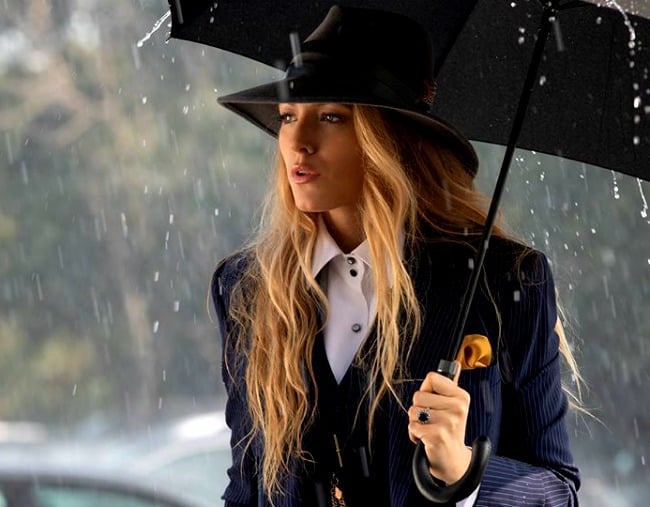 Watching A Simple Favour is very much like downing a mystery cocktail at a bar right before closing time.

There’s a swirl of unexpected tastes just before the true potency of the concoction kicks in and it’s not until after that very last drop has disappeared that you start to feel just a little bit hazy.

A Simple Favour flirts with being both a thriller and black comedy, straddling both genres with ease under the expert direction of Paul Feig (Bridesmaids), with a story-line that darts off in so many different directions that the whole escapade threatens to become a ‘choose your own adventure” scenario.

That is, until every little story thread finally intertwines in a deliciously wicked final show-down.

Take a peek at the trailer for A Simple Favour.

Anna Kendrick stars as Stephanie, a widowed single mother to her young son Miles (Joshua Satine), who divides her time between being the most overly enthusiastic volunteer in her son’s class with being a mummy video blogger on YouTube where she waxes lyrical about recipes and feelings.

In a move that proves children can be both a hindrance and a help, Stephanie’s son befriends the son of the glamorous and mysterious Emily (Blake Lively), a fabulously dressed PR executive who lives with her husband Sean (Henry Golding, everyone’s new fantasy lover thanks to his role in Crazy Rich Asians) in the small town’s most luxurious house.

Emily has never mixed with or spoken to any of the other gawking parents who are clearly afraid of her, until now.

The stand out element of A Simple Favour is the crackling chemistry between leading ladies Kendrick and Lively, who are both clearly revelling in their meaty roles and the chance to share a screen.

There's a dangerous element to the slow-burn build of their relationship, and some of the most tension-filled scenes of the movie take place within the quietest moments when the two of them are simply sitting in a living room together.

These moments should really just be scenes between two primary school mums sharing a drink together after a busy day, but instead each one is layered with complicated character building that really only pays off in the climax of the flick.

Aside from the satisfying finale, Blake Lively is perhaps the most welcome surprise found within this stylish film as she is downright terrifying as Emily, and not just in a cookie-cutter, villainous way.

It is because she effortlessly embodies that that kind of woman we have all come across at one stage in lives, the person who seems too wondrous to ever give you the time of day and when they do it's kind of like looking into the sun. Bright and beautiful with the possibility of being terribly burned if you dare to stare too long.

It's a credit to Lively that Emily never feels like an all-out caricature throughout the movie, despite the over-the-top aspects of her character and the moments that transcend believability . There are quite a few of those in A Simple Favor, but at the same time this is clearly a movie that has no interest in taking itself too seriously, so it's very easy not to get bogged down in a few little plot twists that really don't add up.

Instead, Emily becomes a character so beguiling that even if she attacked you with a knife in your dying moments you'd still feel a small spark of pleasure that she chose you to stab through the heart.

Throughout the wild ride of the film, Stephanie and Emily settle into a cat-and-mouse game set against a backdrop of motherhood, secrets, fabulous outfits and perfectly shaken gin martinis.

I've heard a few other reviewers liken this movie to material explored in successful TV shows such as Desperate Housewives or Big Little Lies, but honestly that kind of comparison does a real disservice to each of these individual projects that can really stand alone. The only thing they have in common is that they all feature female leads who happen to be mothers, following story-lines outside of motherhood.

In truth A Simple Favour is a wild, entertaining and deliciously wicked ride from start to finish, best served with a side of potent cocktails and a couple of your best friends.

A Simple Favour is now playing in cinemas Australia-wide. It is rated M.