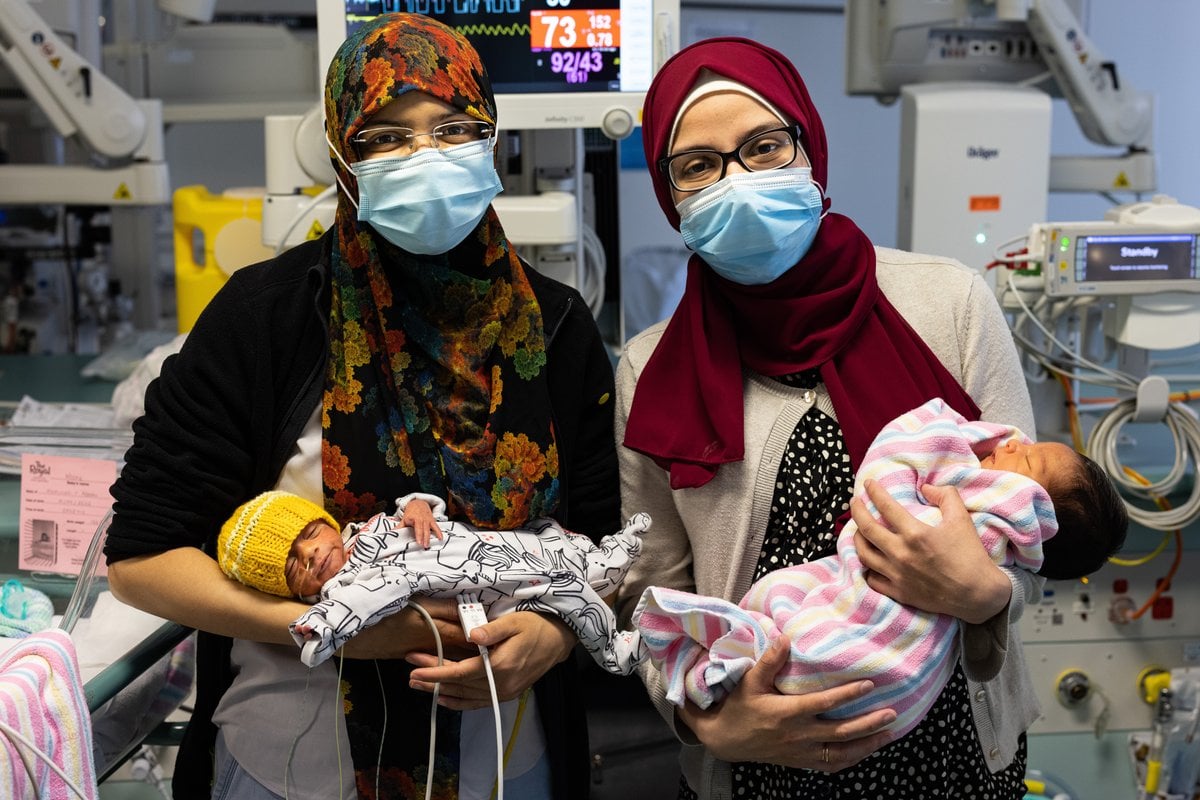 This week, we profile sisters Aari and Mona from Sydney, who each gave birth to a daughter on April 1, 2022.

For sisters Mona and Aari, being pregnant at the same time and due just seven weeks apart was a happy coincidence.

Aari was already mum to a busy toddler, but Mona was pregnant with her first baby.

"The day I went into labour was my first day back at work after a five-week vacation," Mona explains.

"I work as a doctor and it was a normal routine day on the floor. I was only 33 weeks pregnant at the time and so it was unexpected and completely terrifying when my waters broke! It was not subtle either, it went everywhere."

Luckily for Mona, she works at the hospital adjacent to the Royal Hospital for Women where she was due to give birth. Helpful colleagues escorted her to the delivery suite to be checked over.

"I thought I still had lots of time before my due date so I had barely looked at any books or prepped my hospital bag. My sister Aari is the organised one, I had no idea!"

While Mona felt some slight discomfort, she hoped she might hold off from going into full labour. Her parents were in isolation and her husband remained overseas, unable to get home for at least a few days. She called her sister Aari to let her know what was going on.

"I was so shocked to get that call from Mona," Aari says.

"The weird thing was, I had called Mona earlier to tell her I was freaking out because I was being induced the next day at 7am.

"I was 39 weeks and three days and at a regular midwife appointment and ultrasound that morning, there had been some concerns about my baby's changing movements. I had not had the best birth experience with my first child, so the obstetrician had suggested an induction.

"But now, as I packed my bags for my induction, Mona was on the phone telling me her water had broken and it was my turn to reassure her that at least she was in the best place!"

Aari made her way to the delivery suite with Mona's things early that evening, knowing she would be back by 7am for her induction.

"I felt like it was unlikely Mona would have her baby at just 33 weeks. We chatted for a while and she seemed comfortable. When I left, I joked with the midwives on the reception desk about seeing them tomorrow morning, or maybe before. If only I knew how right I was!"

As Mona settled into her hospital room to try to sleep on some mild painkillers, Aari returned home to get some rest.

"I went to bed around 10pm but woke up with back pain at midnight. I asked my husband for a hot water bottle but by 1am, the pain was worse. I got up and started moving around, listening to music, and smelling my favourite candle to distract me from the pain. I had done a hypnobirthing course, and I found all these distraction techniques really helpful." 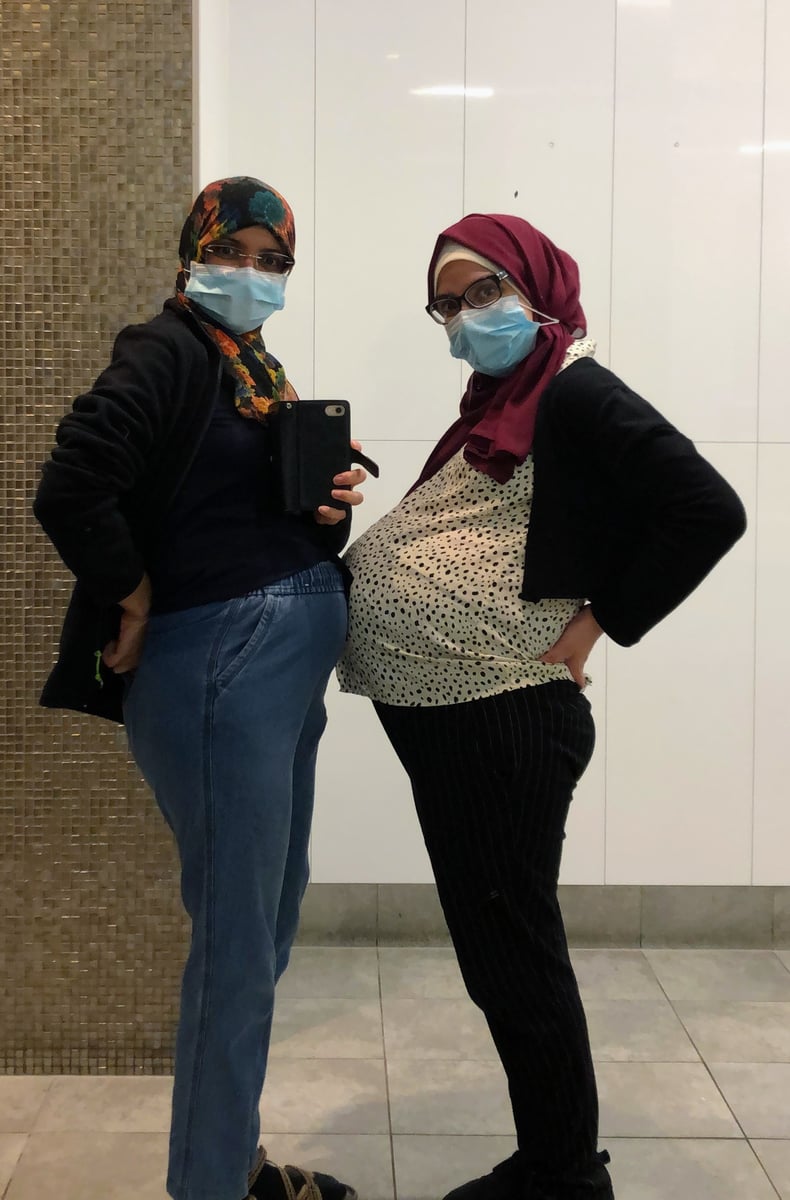 At around 2am and in the middle of some contractions, Aari's water broke.

"That's when we called the hospital and they told me to come in. Our neighbours later told me that I was making so much noise they assumed someone had broken into our house."

When Aari arrived at the hospital she begged for an epidural but when the midwives checked her over, she was already 8cm dilated, so there was no time.

"I recall this beautiful midwife standing by my side and squeezing my shoulder and saying, 'Aari, you are having this baby today'. I felt so reassured and comforted and just minutes later, my daughter Hannah was born."

As Aari held her baby, she remembered her sister was only metres away in another room. She checked her phone to see that Mona had messaged her at 3.35am to say that she too was in labour. Aari couldn't believe it.

"The midwife gently helped me to have a shower and walk down to visit Mona and it was amazing that just minutes after giving birth, I was by my sister's side holding her hand while she laboured."

Mona couldn't believe that Aari had already given birth to her daughter when she came in to support her.

"I had been labouring most of the night and I hadn't heard from Aari so it was amazing to see her. I couldn't believe we had both been having contractions just metres apart," Mona said.

"It could have been such a lonely and scary experience as my husband and parents were unable to be there for me, but not only was Aari there, the midwives were incredible. I remember one of them giving me a soothing hand massage and showing such compassion. I felt cared for and safe."

Mona's baby Noora was born just before 10am on April 1. As she was premature and weighing just 1.5kg, doctors placed her in the NICU. 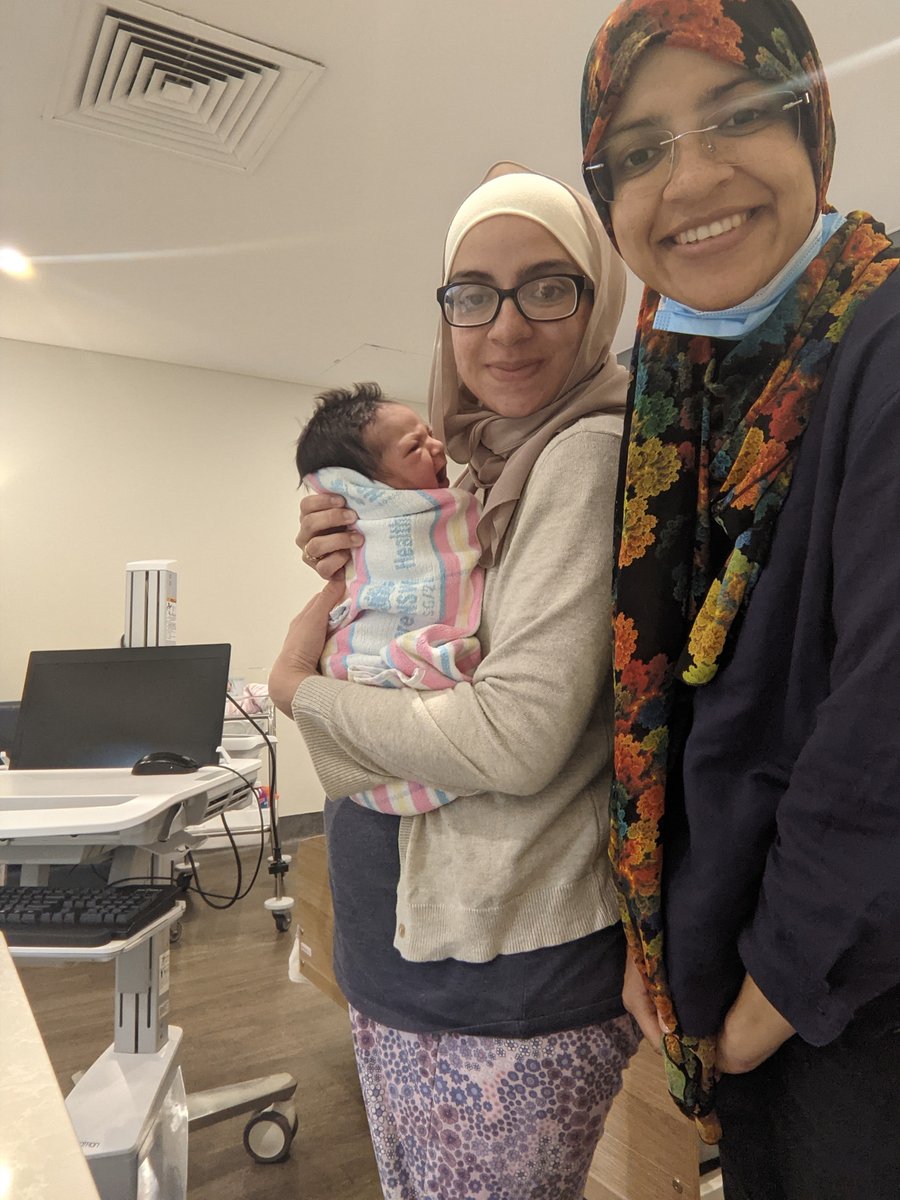 The sisters imagined they would give birth just months apart, but they could never have predicted that they would be in labour at exactly the same time.

"They say truth is stranger than fiction and in this case, it's true!" Aari laughs.

"We joke that baby Noora didn't want to be too late to the party and so had to come early," Mona adds.

After four days, Aari's daughter Hannah was also admitted to NICU to join Noora, due to some complications.

"Hannah is home now, but she literally was in the bed next to her tiny cousin. We say it was because Hannah missed her cousin so much, she had to join her!"

While the longer stay in NICU for baby Noora has been challenging, Mona says that the love and care of the medical team at The Royal has been incredible.

"Seeing my tiny baby hooked up to medical devices or having her tubes changed is distressing, so to see the love and care she receives is everything.

"It is the little things like how gently they cuddle and change her nappy and put love hearts on her chart! I watch the nurses and doctors as they show all the tiny babies such compassion and it really helps me to stay calm. I know that Noora is in the right place while she continues to grow bigger and stronger."

Aari imagines how their baby daughters will love the unique story of their almost simultaneous arrival when they grow up.

"Noora and Hannah will always share their birthday and an incredible birth story at The Royal. Even though they are cousins, I expect they will grow up to be close, almost like sisters!"

If you have a unique birth story to share, let us know by emailing a couple of short sentences to: [email protected] and including 'My Birth Story' in the subject line.