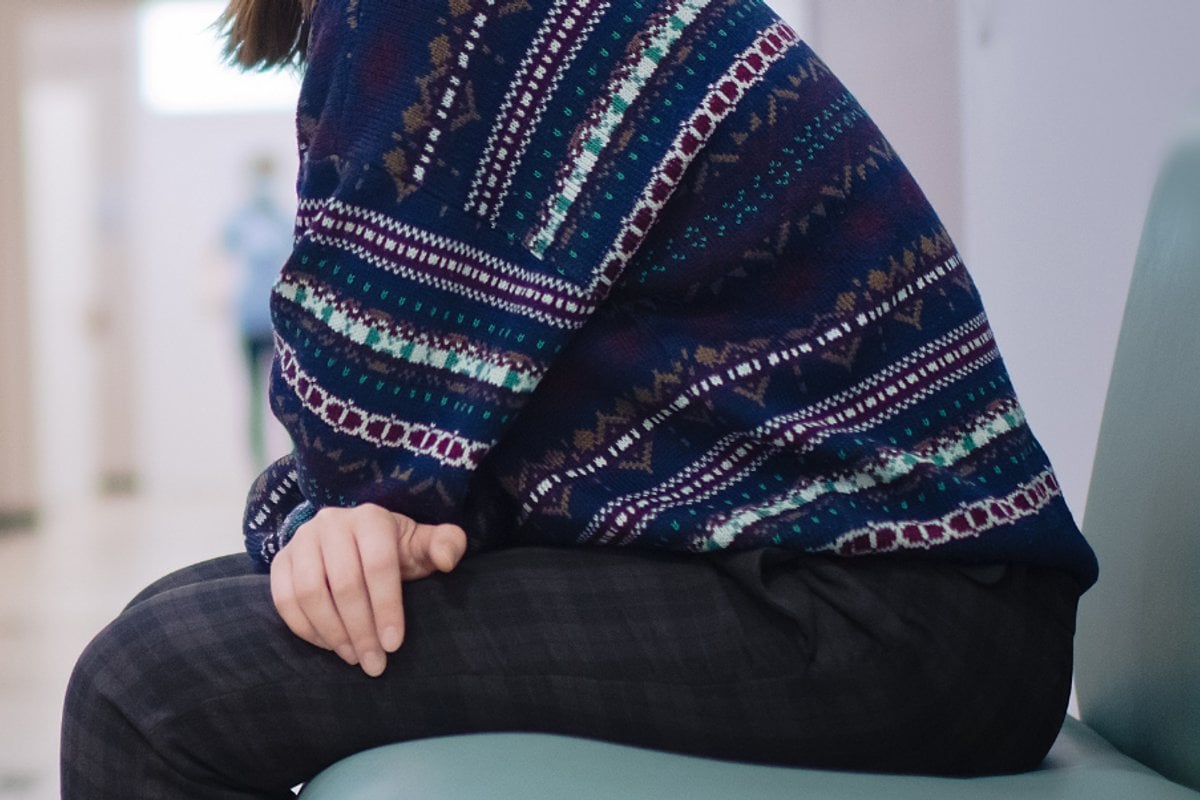 I'm lying in bed, feeding my baby in pain, because life goes on.

We found a number for a midwife and she did our pregnancy care until she referred us to a decorated Obstetrician at a private hospital. We had health insurance, we were moving to the area and she told us that he was a very good practitioner. I don’t remember an alternative being offered.

Despite my initial uneasiness at him being a male, I agreed. He’s a professional with international experience and 40 years of births, his gender shouldn’t matter. If I had to pinpoint why I prefer female doctors, masseuses and beauticians I would have to say something about 'it’s my body' and 'it’s between my husband and me'.

The rest of my pregnancy care went smoothly. He did one internal exam at 39 weeks. I remember going to every appointment, anxiety growing, thinking, 'is he going to look at me today?' Then the relief that I had gotten away with it this week.

I shouldn’t worry though, the receptionist told me he was very good.

We discussed induction and as I hadn’t heard good things about it I had my husband come to the next appointment with me and we asked a few more questions. At this appointment my doctor described me as ‘pushing back’ at him for mentioning induction.

The birth was good, yes it was painful, but it could have been worse. We had a wonderful midwife who helped me breathe, gave me gas and told us we were lucky to have our doctor, he was one of the best.

I wanted to avoid a number of things during labour but I got them all; induced with broken waters, epidural, episiotomy and forceps. At the end I was happy with my birth story, I remember profusely thanking our doctor. I had a healthy baby boy and I did feel really good about my birth, until 11 weeks later when I still hadn’t healed.

I bled for four weeks then it stopped then it started again. I had pimples down there(!). I didn’t know that was possible. I stopped wearing pads because my pimples would pop and then the raw, bloody site would scratch sharply on the cotton. I had the mother of all haemorrhoids. I had sharp pains in my pelvis.

This was my first baby so I didn’t know what to expect. I remember in a pre-admission telephone interview with a midwife asking, ‘what happens to my body after I have a baby?’ I wondered if I could get up and walk the next day, when I could touch my toes again, could I lay on my stomach? I felt caged in my pregnant body, the constant frustration at what I couldn’t do. I was told I needed to give my body time to get back to the way it was.

Equally, when I went to my six week appointment post birth, I didn’t know what to expect. My sister told me the doctor would do a pap smear (man, I hate those). I told myself to suck it up, that an OB was going to be in and out quicker than a GP.

I still felt uncomfortable that a man was going to see me. I wanted my husband to see me first. My husband popped down there in the first week to confirm, yes, they were pimples, but I wanted him to be the first inside me, not an old man with a clangy piece of metal.

At the appointment I cried and had to tell him about all these embarrassing and uncomfortable things happening down below. I said my bottom was bleeding and really sore. He said there were creams I could use, but never said what they were. He prescribed the mini contraceptive pill though, just in case I wanted to have sex with blood pouring out my arsehole and pussy pimples all over my flaps.

I tried to mention the pimples but he cut me off before I could say where they were, my face, neck and chest were scattered with them during pregnancy.

I had another go, “I have cysts down there.”

“Yeah, that can be normal.”

“Will they go away?”

Still no treatment. He asked about a pap smear, I told him I was bleeding, he said to go and have sex and come back in a month or so to do the pap smear. I couldn’t believe it, I’d gotten away with him not seeing me again.

Eight weeks on I was in a lot of pain. I didn’t sit for four days. I ate standing up. I lay on my side to breastfeed. I only sat in the car to drive which was horrible. I wasn’t going for a daily walk. Toileting was excruciating. I joined a Mother's Group and explained my situation to the nurse who gave me a list of female doctors, the name of a haemorrhoid cream, a stool softener and a wash I could get from the pharmacist to wash those pimples away. Finally, something to actually treat my symptoms and from a free service too. Just what was I paying this genius doctor for?

Nine weeks on, I was even worse. My mental state was taking the hit now. My whole body ached from standing all day. I still hadn’t worn pants since before the birth. I couldn’t sit on the floor and play with my baby, I couldn’t even squat to place him on the floor. I needed to give my body time to get back to the way it was, but was it really meant to feel like this?

I rang the surgery and was interrogated by the temp receptionist about why I would need an appointment. I blurted out all the embarrassing and gory details in frustration and booked a time in two weeks. In that time I did start to feel better, better enough to sit on a cushion or sideways with one hip in the air. I rang the next week to complain about the temp, the receptionist said she could get the doctor to call me today. I took it.

I told him that I thought my bottom had healed but I still had a lot of pain on the toilet. Could my stitches have broken open?

“No, your stitches would have dissolved two weeks after the birth. It sounds like you have a fissure.” Which is a really big haemorrhoid. I started thinking that my doctor wasn’t listening to me.

So there I was at 11 weeks. I had to have a pap smear and this time I did want someone to look at me and tell me what was going on downstairs. Again he told me I probably had a fissure. So in we went, undies off and I sat on the big reclined chair.

The cold metal clamp went it, I remember thinking, come on, you’ve had a baby, it can’t be anything worse than that. He did the smear and kept the clamp in, I could feel it weighing down on the outside of my body. He took the clamp out and then all I can remember is a hot, hot burn. He said something about silver nitrate.

I yelped and groaned in pain. My lower vagina and anus was burning. He left it there. Finally he patted me dry. Tears were streaming down my face and I was trying not to make noise. I could feel my armpits and chest sweat. I didn’t struggle giving up alcohol when I fell pregnant, but in that minute I wanted to down a whole bottle of vodka.

He patted my hand and said it was over, I could get dressed. He left the room and I couldn’t keep my sobs in, I could still feel the fire on my privates. I got up and as I collected myself I saw a black powdery smear on the chair where I had been. I went out to his office and thought, ‘does he expect me to sit down?’

“Are you still talking to me?” He laughed. I couldn’t.

He then explained to me that my episiotomy hadn’t healed so he put a liquid on it to cauterise the skin. He told me my haemorrhoid had healed and to see him in two weeks to repeat the procedure. Finishing off with, “This is why we should have done the pap smear at six weeks.” My fault.

I couldn’t look at him. I knew something significant had just happened to me. I did not give my permission for a corrosive chemical to be poured onto my privates. The treatment was not discussed beforehand, I was not informed and I did not consent. Was there an alternative treatment?

My flesh was still on fire as I walked to the reception. I let go sobbing when I saw my husband (thank goodness he had taken the day off with Bub and me). I somehow told him to pay the receptionist and get out of there. I was numb. I kept thinking ‘he burnt me, he burnt me.’

At home I took some Nurofen and cried on the bed. I was still burning three hours later. The thought of having to go back scared me.

I thought about my birth story and now I wasn’t happy about it. Come to think of it, he didn’t tell me or ask if he could break my waters (I’d been in labour for two hours and was three centimetres dilated). But I guess, what did I think was going to happen when I let him examine me? He told me it was time to use forceps, and I turned to our midwife for reassurance. I didn’t realise the episiotomy, but I do remember holding my baby and seeing the doctors arm extend up with a cord in a stitching motion. I didn’t want to know then.

Did I need my waters broken? Was my baby actually stuck or did he use forceps to get the baby out because he had six surgeries to get to today? If he is so good, why didn’t my body heal with his stitches? Why didn’t he explain the importance of inspecting me at the six week appointment?

I had somehow lost a say about what happens to my own body. But he’s one of the best.

The author of this article has chosen the pseudonym Emma. She is known to Mamamia.

Reply
Upvote
Your story almost brought me to tears. He sounds like more of a butcher than a doctor. How dare he burn you without your consent. I hope he doesn't harm any other women. I hope he loses his qualifications. I hope there is a happier ending to your story.
G
gypsy 7 months ago