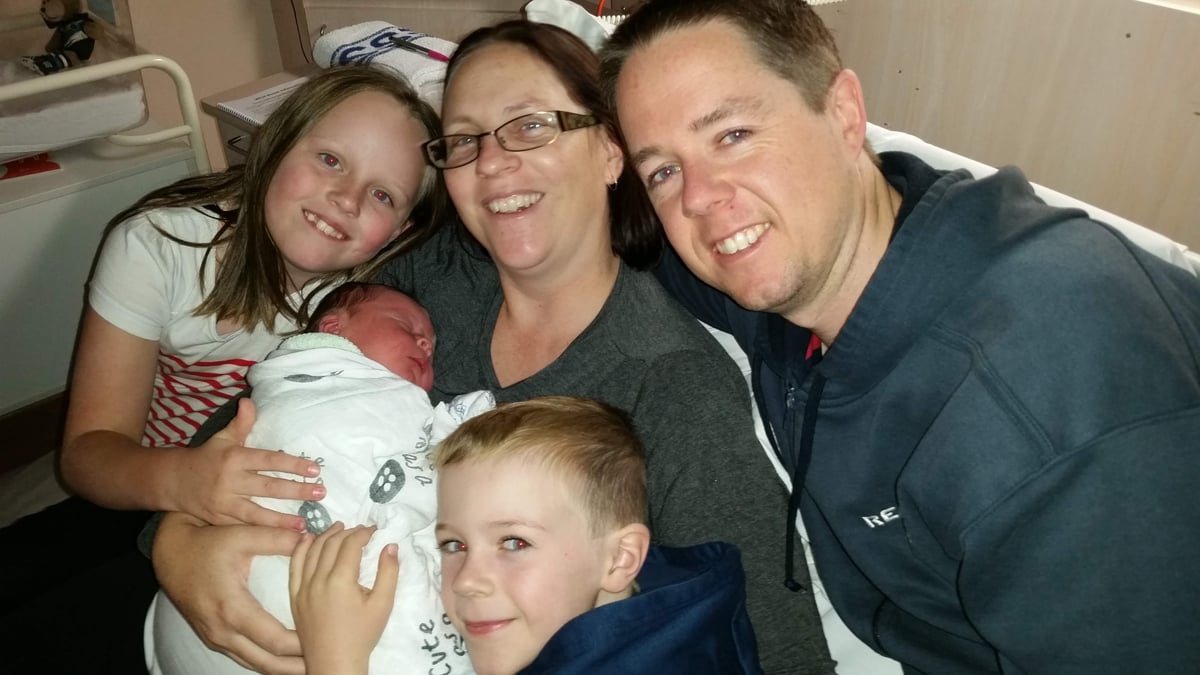 This week we profile Angela Mickan from South Australia, who is mum to 12-year-old Natalie, 11-year-old Henry and four-year-old Bradley.

Angela and husband Jack were keen to start a family in their hometown of Kapunda in South Australia. In 2008 they had daughter Natalie, followed in 2010 by ‘surprise’ baby Henry.

“My pregnancies were not a lot of fun,” Angela recalls.

“I suffered from hyperemesis gravidarum and it was especially bad the first time around. Thankfully my births with both Natalie and Henry in our local hospital were straightforward and uncomplicated.”

After Angela headed back to work as a laboratory manager, the couple decided to wait a while to complete their family.

“We struggled a little bit with number three and I had a miscarriage. But in 2016 we discovered we were pregnant with Bradley.”

It was during the later part of this pregnancy that Angela began to notice real changes in Henry who was then, aged seven.

Watch: In Her Shoes - Mamamia joins 21-year-old student Lea on the day she has her PICC line removed. Post continues below.

“He got sick with a virus and he didn’t get better. He began having a lot of headaches and was so tired. He would come home from school and fall asleep for two hours. For someone so previously active, I knew something wasn’t right.”

Angela and Jack pushed for tests for Henry, and on top of all her ante-natal appointments, it was a busy and stressful time. At 37 weeks pregnant Angela finished work and asked her mum to come and stay to help with the older two kids in case she went into labour.

“On the Monday after Mother’s Day in 2017, we had a call from the doctor to ask if Henry had a fever and if so to take him straight to the Emergency Department. Thankfully Henry didn’t have a fever but they informed us that as his white cell count was low a fever could be life threatening. It was the first real confirmation that something was very wrong.”

Their local GP arranged an appointment with the haematology and oncology department at the Women and Children’s hospital in Adelaide for a bone marrow biopsy for Henry.

“By this time I was 39 weeks pregnant and very anxious. Jack took Henry to Adelaide with his mum as a support for the procedure and I stayed at home with my mum and Natalie.

“As soon as Jack called to tell me the results of the biopsy, I could hear it in his voice that it was not good. They had discovered leukemic cells and would need to start treatment on Monday.

“I was completely overwhelmed, thinking, ‘what will I do?’”

Angela got straight on the phone to her GP who offered to induce her in the local hospital where she had birthed Henry and Natalie. The oncologist in Adelaide also offered her the chance to give birth there to be close to Henry. 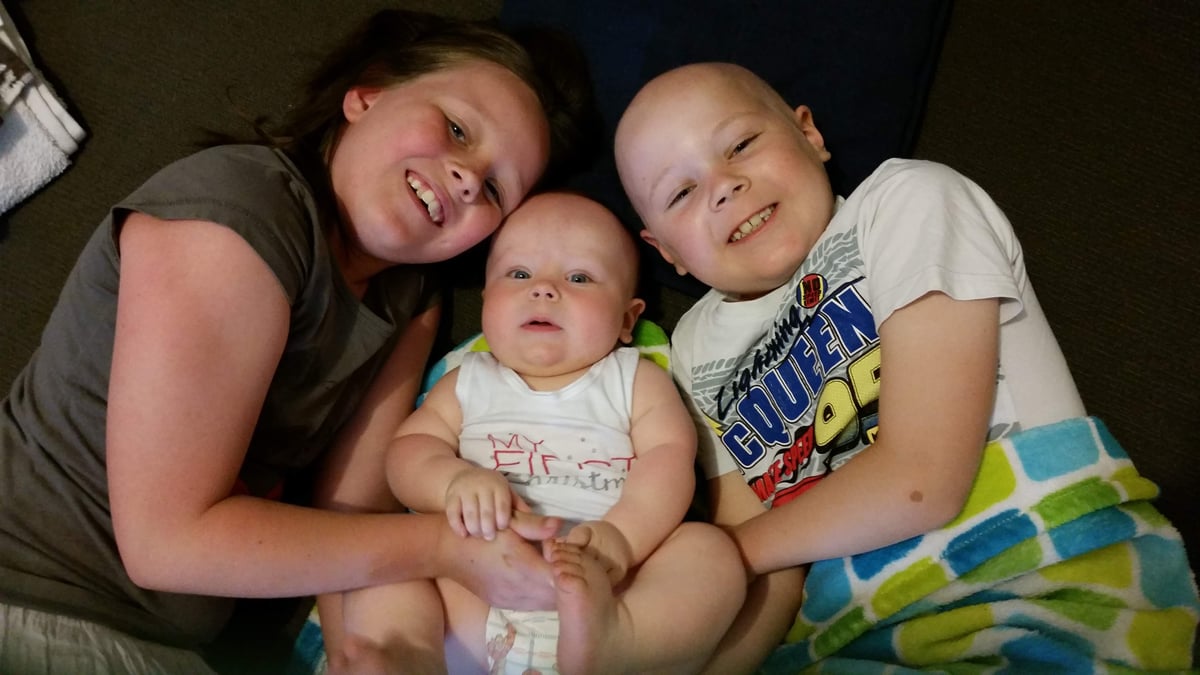 “Ultimately I chose to give birth in Adelaide so that if anything went wrong, I would be in the same hospital as Henry. I made arrangements for my parents to stay home with Natalie and Henry in Kapunda and I was induced at 6pm on Friday night.”

Listen to The Delivery Room: Host Jessie Stephens discusses all the different ways women give birth. Post continues below.

The birth was tough. Angela hadn’t slept in two days due to stress and thankfully Jack stepped in to tell the midwife that he thought Angela needed an epidural.

“After receiving the epidural I slept for a few hours which was a huge relief and during that time I became fully dilated and ready for the pushing phase.

“After feeling completely exhausted and telling the obstetrician I had nothing left to give, she said, ‘okay, let’s do it together’ and Bradley was delivered with forceps at 6am on Saturday morning.”

Angela recovered well from Bradley’s birth and the whole family were able to come home to Kapunda to meet and cuddle their newest family member for a few happy hours on Sunday.

The very next morning Angela and Jack took Henry back to Adelaide to await surgery to insert his chemo port.

“Henry was on the emergency list so he couldn’t eat while we waited. I had a two day old baby and my seven-year-old was in a hospital bed confused, scared and hungry. It was the absolute hardest day of my life. Henry kept getting bumped from the list, but finally at 3pm he went into theatre.”

Angela had arranged to stay with a friend in the city with baby Bradley, while Jack slept in the hospital room next to Henry. But when it was time to leave, she found it incredibly distressing.

“I thought, how can I leave Henry? I felt so torn. The nurses offered to fetch baby Bradley a crib and a separate bed for me, but I realised I simply couldn’t care for them both. Jack was capable of staying with Henry while I focussed on Bradley but it was a very hard decision.”

In the weeks that followed Henry’s initial surgery, Jack cared for Henry while Angela and baby Bradley travelled back and forth to Adelaide every day.

“I would get up at 6am and be at the hospital until 8pm with Jack and Henry. They were such long days and we could not have done it without family and friends who stayed with Natalie and kept her life as normal as possible.

“We also had meals cooked for us and people offering to drive me to the hospital and back.

“Our days were filled with meetings with specialists and appointments for Bradley and me - it was very full on.” 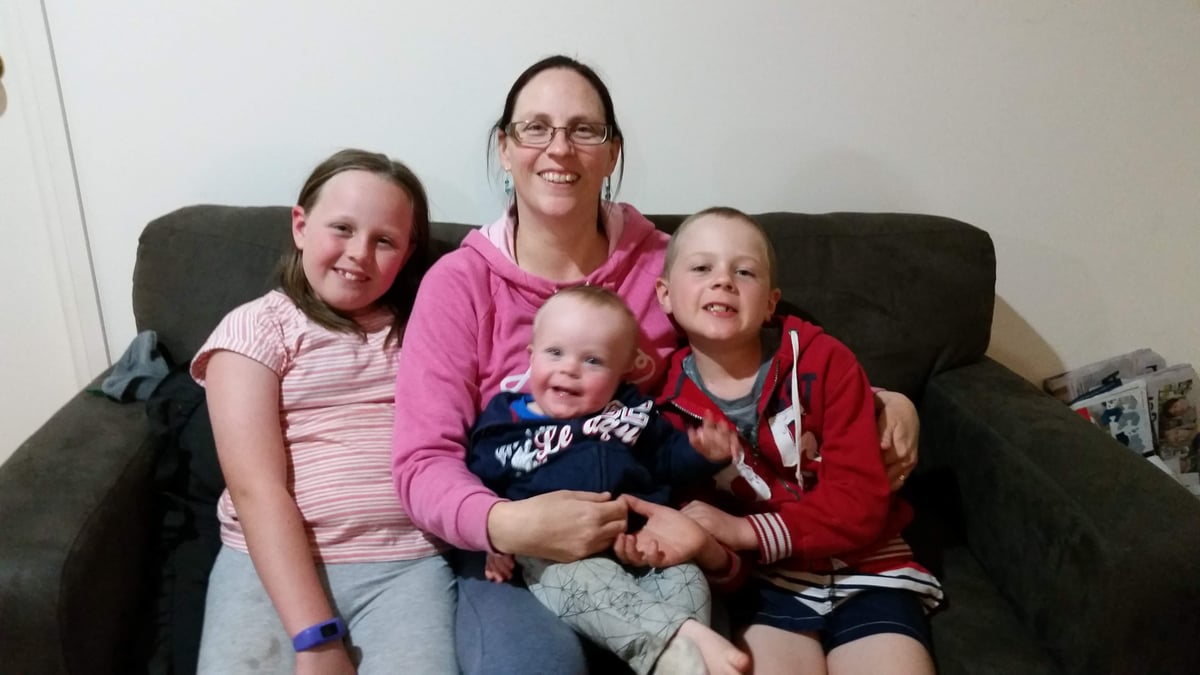 After his stay in hospital following surgery, Henry was allowed to come home, but during the initial months of intensive treatment they travelled to Adelaide almost daily for chemotherapy treatment and numerous invasive procedures. Often these were very long days and Angela, Jack, Henry and Bradley would get home very late at night after Natalie had gone to bed.

In total, Henry had three years of chemotherapy before all treatment stopped in May 2020 and his immune system was allowed to recover.

“Most of the time we just had to all get on with it, but there were times, like when the steroids made Henry so weak he couldn’t walk and had to sit in Bradley’s pram, that were simply awful.

“The steroids also made him put on weight as he was so hungry all the time and when he had to fast before a procedure that was absolute torture.”

The whole family tried to focus on the positives and keep their lives and routines as normal as possible. Having baby Bradley around was a very welcome distraction.

“I struggled more than the rest of the family with worry and lying awake at night. I switched careers to work at their school so I was able to stay close to the kids and support Henry when he returned.

“Aside from the help from family and friends we also received a lot of support from a number of charities including Redkite, a charity that supports young cancer patients and their families.

“They gave us so much guidance and also loaned us specialty books for Natalie and Henry to understand what was happening at every stage of treatment. Moments like when Henry lost his hair which was a really difficult thing for him to deal with. Also fuel vouchers for the huge amount of driving to appointments we had to do. There are just so many aspects of caring for a critically ill child that we hadn’t prepared for.”

Now Henry is 11-years-old and back full time at school doing all the things he loves including basketball, footy and cricket. Sister Natalie is almost 13 and ‘baby’ Bradley is aged four.

“It took some time for Henry to settle into the classroom, but he is back into the swing of things.

“He has a great relationship with his siblings after all they have been through and apart from trips back to Adelaide every couple of months, we are taking each day as it comes.”

If you have a unique birth story to share, let us know by emailing a couple of short sentences to: [email protected] and including 'My Birth Story' in the subject line. We will then send you a Google Form to complete.