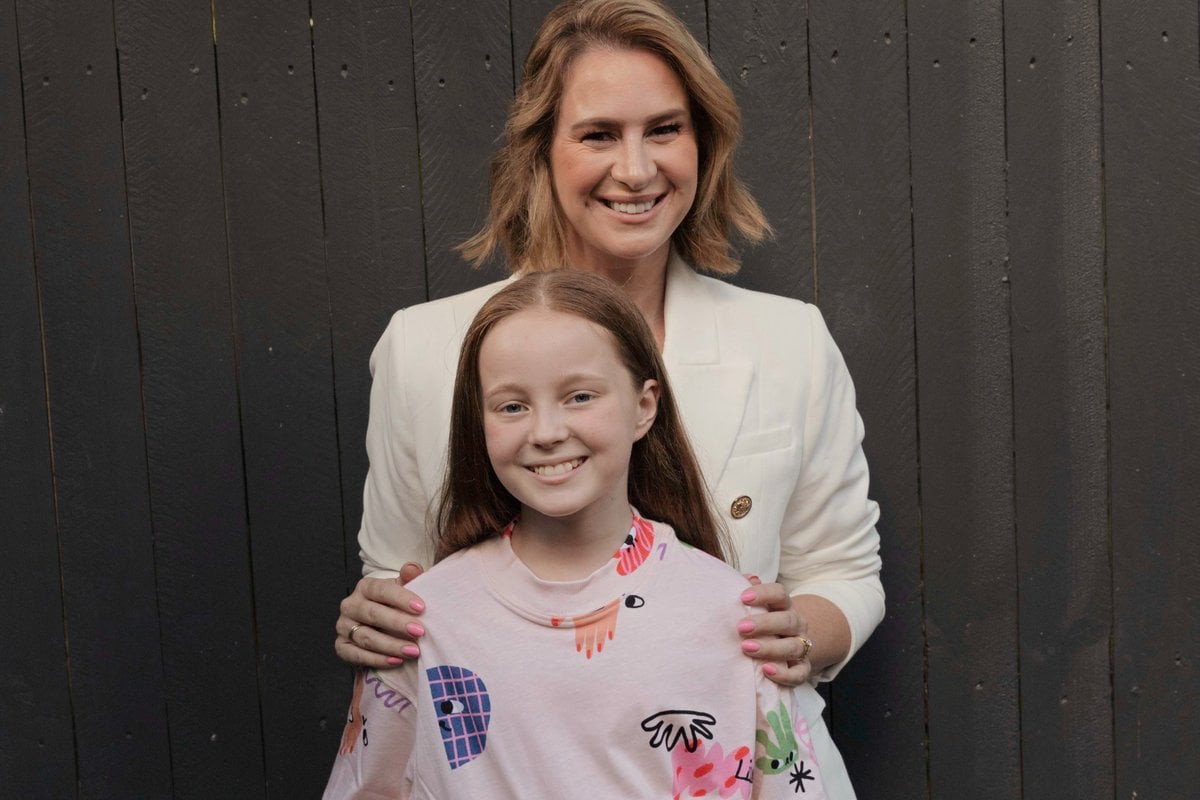 It was one o’clock in the morning in real time. In my head it was a lot earlier. I’d lost track of time around 10pm.

I was walking up the hill from our neighbour's house with my two kids aged nine and 10 in tow.

They were never awake this late, let alone out on the street. A friend of my neighbour was walking us home as my husband was away for the weekend. He wanted to make sure we got home ok.

I probably told him he didn’t need to and we would be fine. I don’t remember. I was blackout drunk.

Watch: Your body after a year without drinking. Post continues below.

The next day, my daughter tried to talk to me about what had happened. “Mummy, your white jacket is in the laundry, don’t you remember? You spilled your coffee drink all over it?”

A friend and I had been drinking espresso martinis on the living room floor of my friend's house while my daughter says she stood over me asking if it was time to go home.

It had been time to go for hours already, but I had no idea. She says I kept telling her we would leave “in a minute.”

The following morning, I had to take her and her brother to a birthday party with the hangover from hell. I went into the toilets at the bowling alley where the party was being held and threw up.

At a kid’s birthday party. The shame.

Later, I was getting changed for a swim with the kids - which I was hoping would wash away some of the hangover and win back some parenting points for the day - when my daughter pointed out the bruises already coming up on my shoulder and thigh. “Ouch Mummy, that must be from where you slid down the stairs.”

I didn’t remember falling down the stairs.

My husband, who was away interstate for work, messaged to tell me my daughter had sent him a text at 2am saying she was worried about me. [Just to clarify, my husband is not the father of my kids.]

Apparently, I had tucked the kids into bed and wasn’t making a lot of sense. My daughter had come upstairs to check on me in my bed and told me she was crying because she didn’t know if I was ok.

I’m crying now, telling you this. Because I hate myself for scaring her.

For making her feel like she wasn’t being cared for.

It wasn’t always like this. I promise. This was the first time they had really seen me drunk.

I was trying to drink away all of my fear and worry because their father was in the UK and he was dying. We couldn’t go to him because of the pandemic. I was drinking too much in an attempt to cope. I was not in a good place. But that’s no excuse.

It had to stop.

After their father passed away, I spent the last few horrific weeks of his too short life trying to drink away my grief and the pain I felt for them losing him.

I was digging myself into a deep, dark hole of depression when my kids needed me the most.

I stopped drinking cold turkey after seeing the grief, fear, and worry on my daughter’s face.

They had already lost one parent. As well as dealing with the awfulness of her father’s death, she wanted to talk about what had happened the night I got drunk and spilt my martini.

She wanted to talk through everything about that night, but I kept brushing her off.

I guess I thought if I made it a little memory and didn’t give any oxygen to the story of, “What happened the night Mummy got drunk and we stayed out until 1am” then maybe it would go away. Maybe she would forget. That’s what I was naively hoping, but it wasn’t happening.

When I stopped drinking, I decided to talk to them about it and explained I wouldn’t be having any more glasses of wine, champagne or martinis. I promised them I wouldn’t get drunk and scare them ever again.

They were happy, but they still had questions, and my daughter kept bringing up that night. As the weeks passed and I navigated my new sober life, I began to feel brave enough to talk to them about drinking.

I’d seen another mum on TikTok talking to her son about everything from his day at school to gender equality and feminism.

He was a lot younger than my kids and it made me feel like I owed it to them, to give them a voice and the space to be heard. I showed them one of her TikTok’s and asked if they wanted to make one. They said yes.

We decided to do it in the car on our way to walk the dogs at the beach.

I didn’t have any makeup on or any filters. The sound quality wasn’t great, but I guess it didn’t matter. The videos got hundreds of thousands of views.

In it, I asked the kids what they thought about alcohol, about adults drinking and specifically about my drinking and when I got drunk.

Olivia told the story of my drunken night while I filmed myself listening.

She talked articulately about the night I scared her and made her cry. The worst night. I posted it. I don’t know what I was expecting, but I was shocked by what I got.

The vast majority of the comments were so supportive.

There were people out there telling me I was brave, that I’d done the right thing. That I was an inspiration for letting the children speak, for listening, for owning my mistakes.

I thought the internet was a horrible place and that people would see my shame and tell me what I already knew, that I’d hurt my kids and scared them and should be ashamed of the damage I’d caused. I was. I am. But other than literally two or three people, the thousands of people who commented on our videos were amazingly supportive.

It broke my heart to read about the people who recognised that they had been subjected to this as kids and were never given the chance to talk about it with their parents.

There were people who said their parents denied ever getting drunk or got angry with them if they tried to discuss nights when they’d been drinking.

I spent hours replying to them all saying how sorry I was and thanking them for being so kind to us, so kind to me when I had shown myself at my worst.

There were a couple of people who asked why I would post the videos.

I guess the answer is to publicly apologise to my kids and hold myself accountable in a real way.

I hope it helps someone see the benefit of talking to your kids about difficult things that have happened. I didn’t realise how uncomfortable my kids felt being around adults who drank until I asked them about it.

I’m now nearly eight months sober. I don’t want them to feel scared, confused or unsafe because of my drinking, or anyone else’s drinking again.

If it reaches just one person or one family who end up changing the way they drink around their kids, then I think we will have made something good out of something awful.

Reply
Upvote
This story reminds me of me 15 years ago when I too went cold turkey and gave up drinking. I too gave up after seeing the fear in my eldests sons face. It reminded of me at that age looking at my father who drunk until the day he died, was an alcoholic. I didnt want my sons to be scared like I always was. So my boys came first and now I have been 15 years sober. I used to drink until I blacked out and I would turn up also to kids things hung over. For my sons and husband, I am glad I gave up. One of my ex Friends never has and is still drinking herself into an early grave. My brother died at 45 from alcoholic reason. I have the life I have always wanted, Two adult sons, 3 beautiful grandchildren and a husband.
M
mb1111 a month ago

Reply
Upvote
2 upvotes
I like articles like this because they contrast the popularity of the mummy wino culture that is so prolific these days. Good on you for sharing.  As a child I had one parent who was an alcoholic and I remember great slabs of childhood that consisted of them sleeping off a hangover and batting me away or bribing me if I wanted their attention. They rehabbed in my teenage years but a lot of damage was done. I love a drink but after having kids, will never have enough to have me couch bound the following day, as it brings back a lot of sad memories. My kids are worth more than that.
News
General
Opinion
True Crime
Politics
Sport
Explainer
Entertainment
Celebrity
Reality TV
Movies
TV
Books
Rogue
Royal
Lifestyle
Beauty
Fashion
Weddings
Home
Wellness
Health
Fitness
Travel
Food
Family
Before The Bump
Pregnancy
Baby
Kids
Teens
School
Parent Opinion
Work & Money
Money
Finance
Career
Lady Startup
Relationships
Sex
Dating
Separation
Friendship
Family
Real Life
Couples