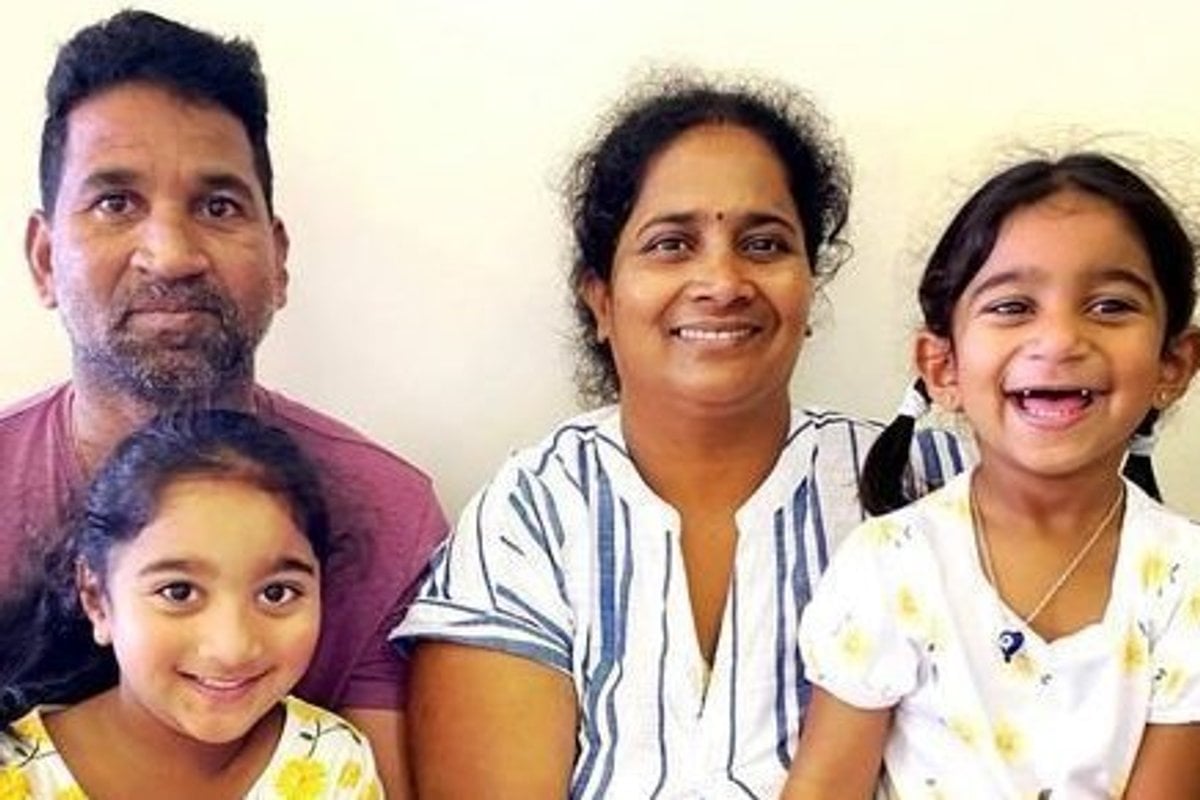 For 10 days, three-year-old Tharnicaa Murugappan was really sick. Despite vomiting, diarrhoea, dizziness and a high temperature, she was only offered Panadol and Nurofen.

Tharnicaa and her older sister Kopika are the only two children detained at Christmas Island Detention Centre - an Australian immigration facility notorious for their harsh treatment of detainees.

Her mother, Priya, says that when they asked the staff for hospital treatment, their sick daughter was repeatedly refused.

Then after her condition worsened, the Australian-born child was medically evacuated to a Perth hospital. According to her friends, Tharnicaa was diagnosed with untreated pneumonia which they believe has caused a suspected blood infection. 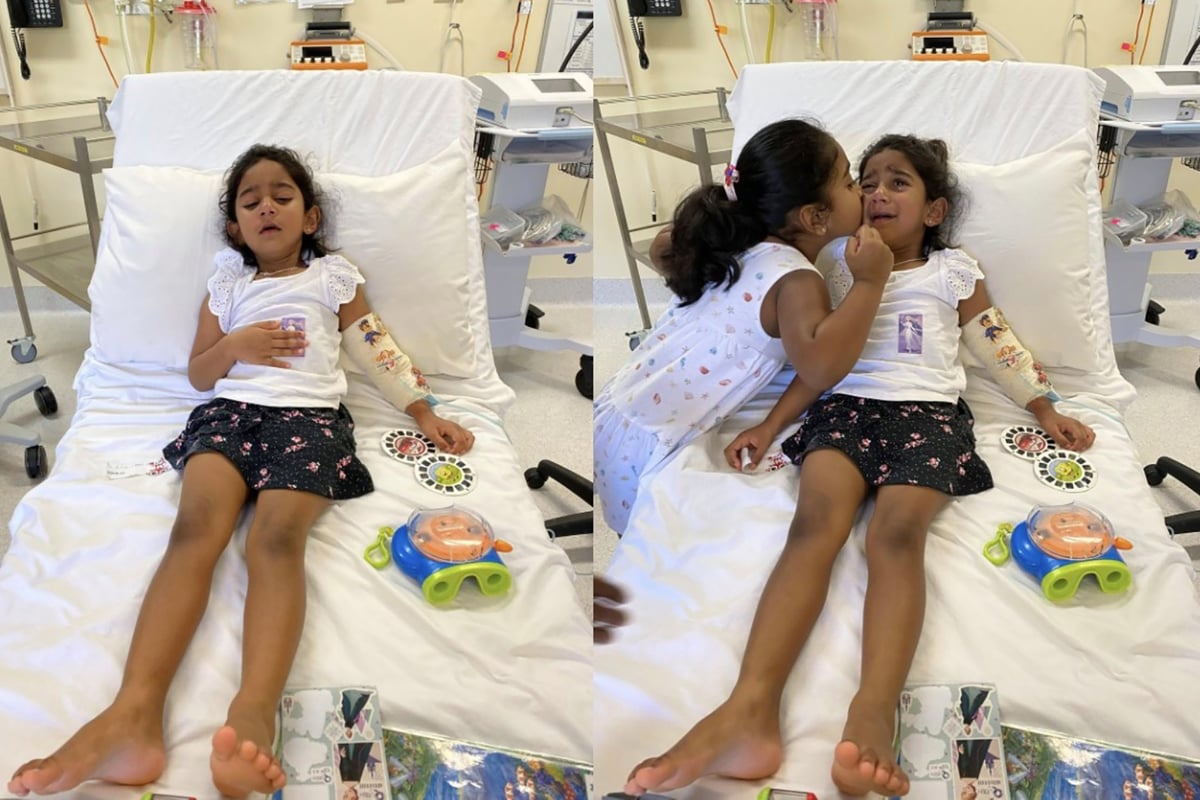 Tharnicaa Murugappan has been medically evacuated to Perth with a suspected blood infection. Image: AAP. It's not the first time Tharnicaa, who was just nine months old when she was first held in Australia's detention facilities with her family, has been denied immediate treatment after suffering from an illness.

For the past three years, all she has known is life in Australia's immigration detention.

However, news broke this afternoon that Immigration Minister Alex Hawke has issued the Murugappan family with three-month bridging visas, allowing them to remain in Perth for that duration.

The decision also allows for the two parents to work and study in Perth.

However, only three out of the four family members have been issued these three-month bridging visas - leaving the youngest child, Tharnicaa, who has recently been discharged from hospital, out in the cold.

A friend of the family, Angela Fredericks, raised this concern in a Change.org statement, asking: "While we welcome Priya, Nades, and Kopika being granted bridging visas, we wonder what precisely is the minister's objective in denying little Tharni one."

"This family must stay together, and they need to be back in Biloela as soon as humanly possible," which is the town that the family were living in prior to their detention. The only home that the two girls know outside of the Christmas Island detention centre.

While their story unfolds in real time, take a look back at the family's heavy history.

This is the story of the Biloela family.

Who are the Biloela family?

In 2012, Priya sought asylum in Australia from Sri Lanka. Prior to her arrival, her fiancé was burned alive, alongside five other men, at the hands of the Sri Lankan government. He was killed because he belonged to the Tamil ethnic group, native to Sri Lanka, but persecuted by the Sri Lankan Military.

In 2013, a man named Nadesalingam sought refuge for the same reason. His friends say he is still covered in shrapnel (fragments of a bomb) that exploded on him.

In Australia, Priya and Nadesalingam met. They married and found peace and safety in Biloela, a small suburb in Central Queensland. They had two daughters, Kopika and Tharunicaa, who were born in Australia.

The family were valued members of the community. Nadesalingam worked at the local meat works. After becoming a mother, Priya brought curries to the doctors and nurses at Biloela Hospital to share her gratitude for the care she had received.

Simone Cameron, who used to live in Biloela with the family, told the ABC they were, “lovely, salt-of-the-earth people… They’ve had such a traumatic life living through a war and they just thought a town like Biloela was the answer to their dreams”.

For three years, the small town of Biloela offered the safety they had long hoped for.

The Australian Government tried to deport them, twice.

In the early hours of March 5, 2018 officers from the Australian Border Force stormed their home. They had arrived to deport the family of four, two of whom were born in Australia.

Their sleeping children, the youngest of whom was nine months old, were taken from their beds. Priya and Nades were given 10 minutes to collect their belongings and leave their home.

They were sent to Melbourne's Broadmeadows detention centre.

After a few nights, they were pushed onto a flight, destined for Sri Lanka. But mere minutes before take-off, they were pulled off the flight.

Why? Because the 6,000 strong town of Biloela had launched a campaign #HometoBilo and lobbied politicians, pleading for the return of their friends and fellow Biloela residents. The petition now has more than 370,000 signatures.

A legal intervention (at least temporarily) stopped their deportation, and the family were sent back to detention in Melbourne. 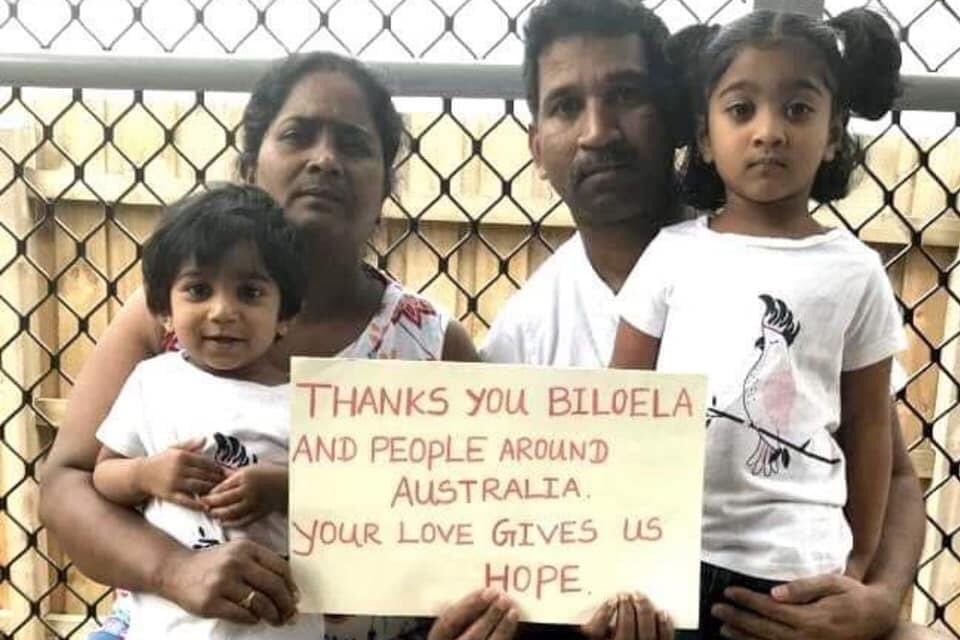 The Biloela family has been in immigration detention in Australia for three years. Image: HometoBilo/Twitter.

A battle with the courts ensued, with the family exhausting every legal avenue they had. The government has repeatedly argued that it is safe for the family to return to Sri Lanka, whilst the family insists it is not safe. The court battles are still continuing today.

Their legal case rests on their youngest daughter, Tharnicaa, and her right to apply for a protection visa - meaning she cannot be deported by the Australian government until the matter is decided through the court system.

In August 2019, the family was once again removed from detention, without warning, and put on a plane bound for Sri Lanka. But a last-minute court injunction sensationally grounded their flight, forcing the pilot to land in Darwin. They were held at a military base, before an army plane took the family to Christmas Island, located in the Indian Ocean off the coast of Western Australia, where they have remained since. 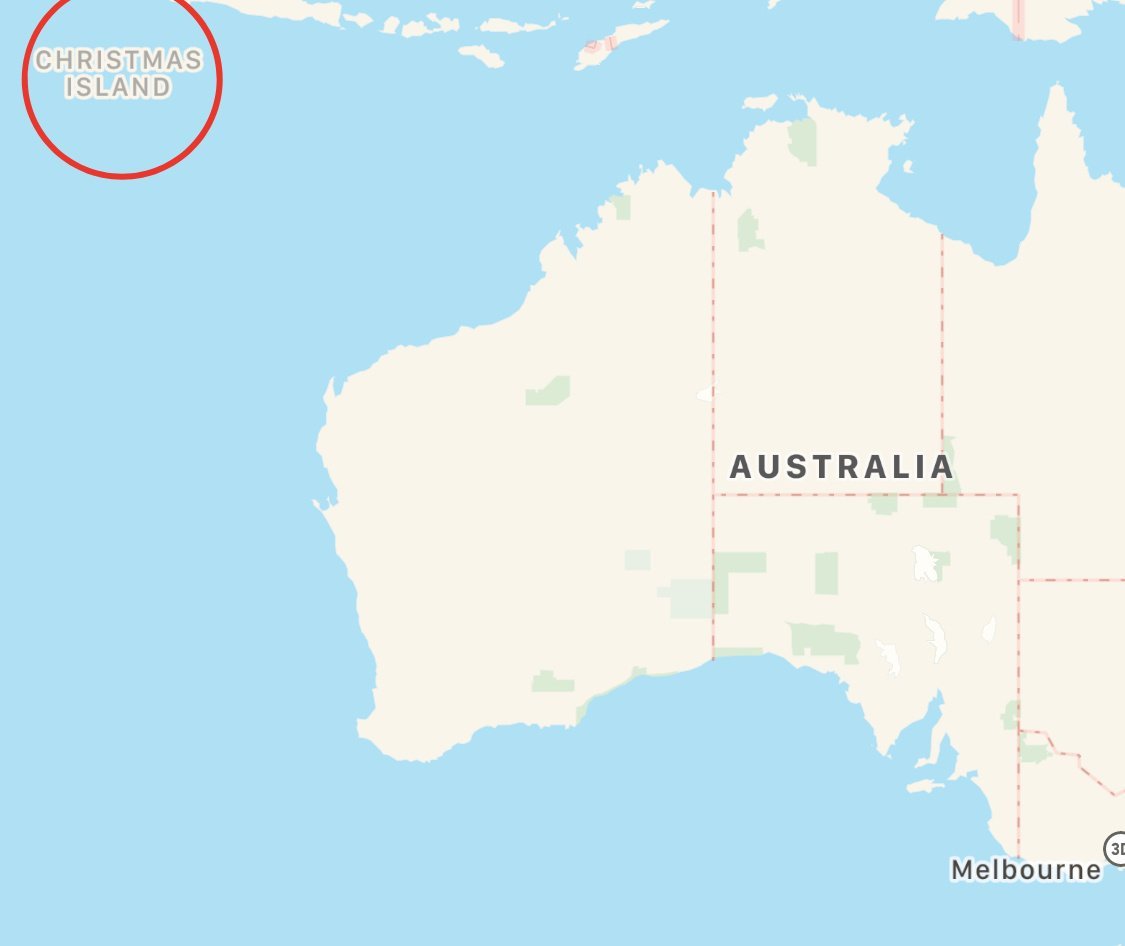 Christmas Island, off the coast of Western Australia, is part of Australia. Image: Google Maps.

What does their life on Christmas Island look like?

Christmas Island Detention Centre once housed thousands of asylum seekers at the height of Australia's offshore detention program, until it was officially closed in 2018. For a while, the family of four were the only occupants of the facility. (In 2020 it reopened to returning travellers from Wuhan, China, at the beginning of the coronavirus pandemic. It now houses more detainees once again.)

According to an Australian Human Rights Commission report, prolonged detention at Christmas Island has "profoundly negative impacts on the mental and emotional health and development of children".

The report also found that at certain times, children detained on Christmas Island did not enjoy certain human rights, including: "the right to be treated with humanity and respect for the inherent dignity of the human person."

In late 2019, Priya told Guardian Australia that Tharnicaa was "not eating proper food". They all slept in the one bedroom on a bunk bed, with the parents sleeping with a child each on either the top or bottom bunk. 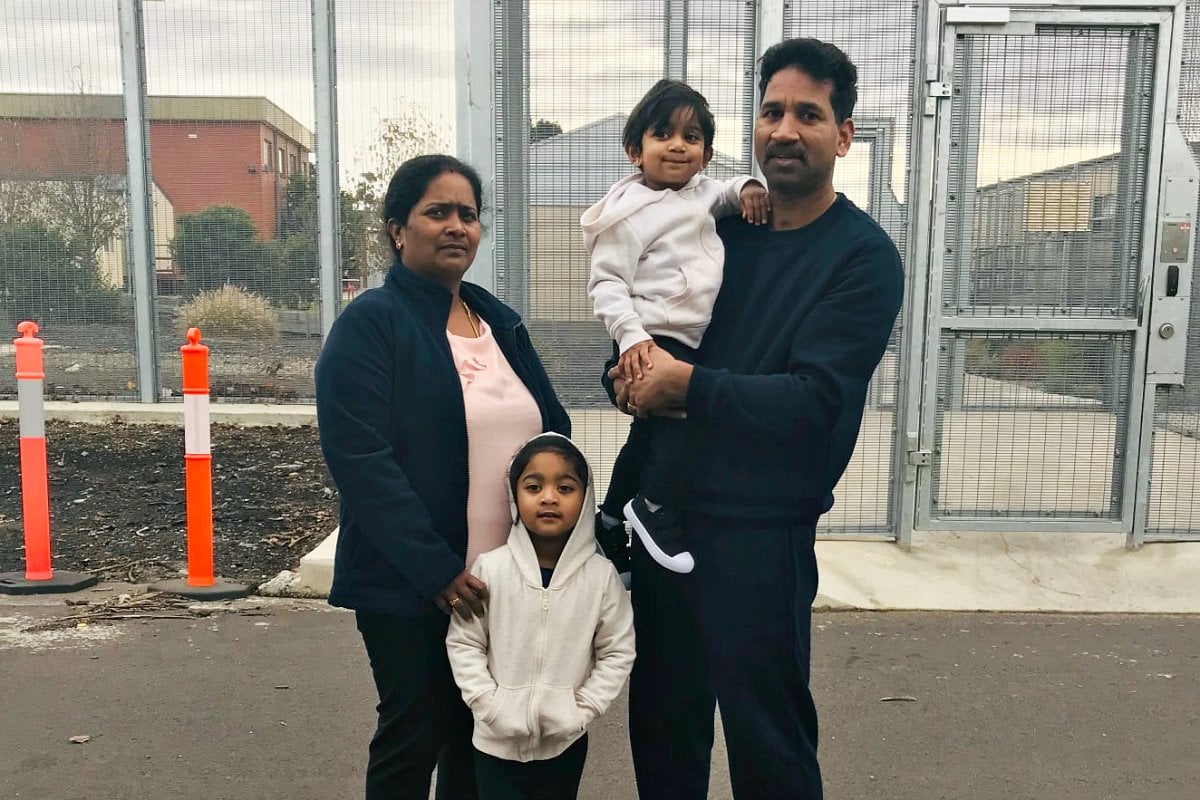 When Tharnicaa was two, she suffered from different vitamin and nutritional deficiencies that caused several issues, including the need to have her teeth surgically removed. She also suffered a concussion at one point, and was not taken to hospital until she began vomiting, according to family friends.

Priya spoke to BBC in May of this year, sharing she has developed depression.

"I find it very hard to pass the day. Mentally and physically," she explained, adding there are guards patrolling them every day, like they are criminals.

Priya also shared one of the guards came to her room who she believed wanted to touch her body, which made her concerned for her safety.

In August 2020, Priya was medically evacuated to Perth due to severe abdominal pain. She was then flown back to Christmas Island under police guard, according to her friends.

In response to the media's many enquiries, the Australian Border Force has always maintained they are "committed to ensuring the health and wellbeing of the family".

One of the latest developments in their story is Tharnicaa's medical evacuation to the Perth hospital, where she was been diagnosed with untreated pneumonia, which her family friends believe caused the blood infection.

"I am feeling very scared and worried for my little girl," Priya, who accompanied her daughter to the Perth hospital, said in a media statement on Monday afternoon.

“She has been sick for many days, it took a long time for her to get to the hospital. She is already asking for her papa, it is going to be very hard being away from her Dad and sister. It is very hard for our family to be separated when our daughter is sick.”

Angela Fredericks, family friend and spokesperson for the Home to Biloela group, also commented on the developing situation, saying: “If her loving parents were able to access medical services for their children the moment they needed it - as they would in the Australian community - we would not see these shocking delays. That’s all Nades and Priya want to do for their girls - to care for and protect them.”

Karen Andrews, the Home Affairs Minister who has the power to intervene at any moment, told reporters at the time that they are exploring resettlement options for the family.

News followed weeks later that Immigration Minister Alex Hawke has issued the Murugappan family with three-month bridging visas, allowing them to remain in Perth for that duration.

"This decision allows three members of the family to reside in the Perth community on bridging visas while the youngest child's medical care, and the family's legal matters, are ongoing," he said in a statement.

Reply
Upvote
The government should be ashamed of themselves in the handling of this family’s case.
M
mccourt a year ago

Reply
Upvote
2 upvotes
We cannot let Australian voters forget the depths of the cruelty that this government has inflicted on this poor defenceless family. They belong home in Bilo.
S
smart cookie a year ago

Reply
Upvote
@mccourt Email Senator Payne and let her know what you think.
C
cat a year ago

Reply
Upvote
@smart cookie  don't bother, it wont help and some poor public servant will spend two days on a response. The only thing that will help is voting them out.
S
smart cookie a year ago