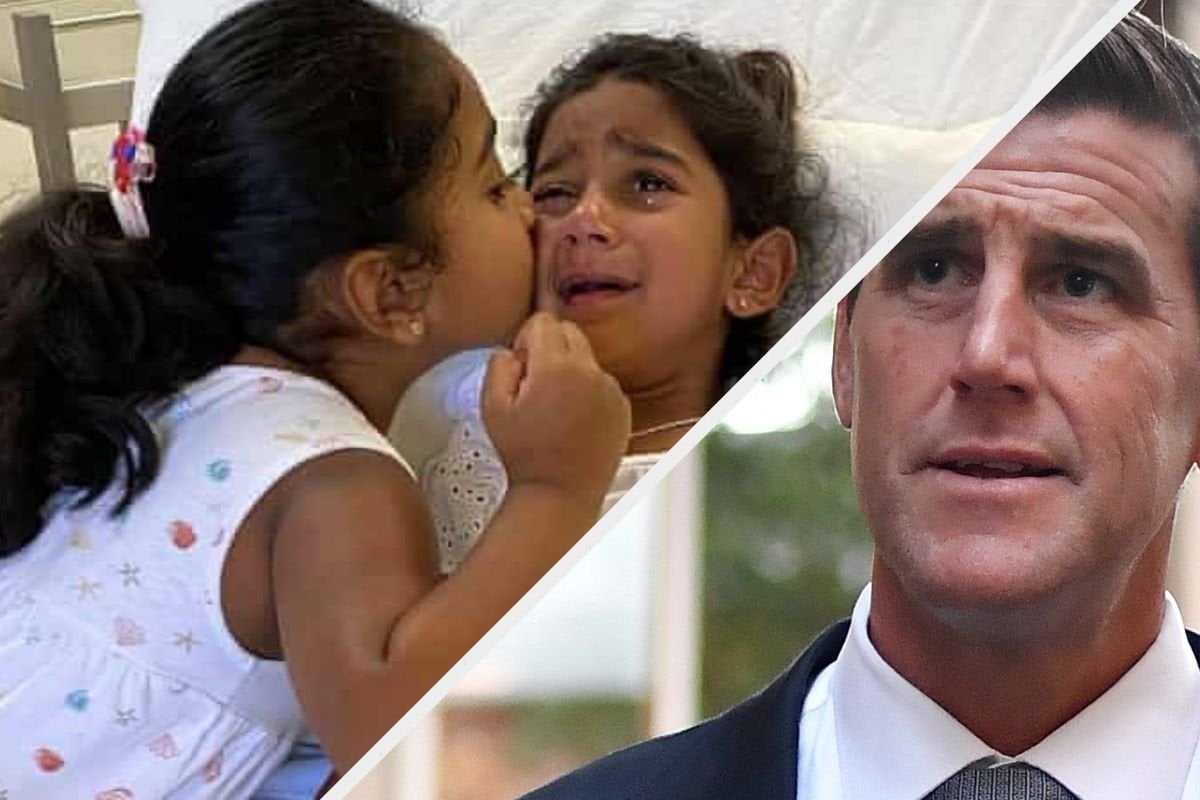 Biloela family 'must be resettled' as youngest medically evacuated.

Advocates have renewed calls for a family detained on Christmas Island to be resettled in Australia after the youngest daughter was flown to Perth with a suspected blood infection.

They said Tharnicaa had been unwell for 10 days and might have septicaemia.

"I am feeling very scared and worried for my little girl," her mother Priya said. https://t.co/0hqQ6Be0GI

"I am feeling very scared and worried for my little girl," Priya said in a family statement.

"She has been sick for many days, it took a long time for her to get to the hospital.

"She is already asking for her papa, it is going to be very hard being away from her Dad and sister. It is very hard for our family to be separated when our daughter is sick."

Advocates said Tharnicaa had experienced vomiting, diarrhoea, dizziness and a temperature of more than 40 degrees. They said detention centre staff didn't take Tharnicaa to the hospital on Christmas Island until Sunday, despite multiple requests from her mother.

The Department of Home Affairs said both the department and the Australian Border Force were committed to the welfare of detainees in immigration detention.

Priya, Nades and their two Australian-born daughters, Tharnicaa and six-year-old Kopika, have been held on Christmas Island since August 2019 as the government tries to deport them to Sri Lanka, despite a community campaign to let them stay.

They were removed from their home in the rural Queensland town of Biloela and placed into immigration detention in 2018. The federal government has spent more than $6 million keeping the family in detention for the past three years.

Labor Senator Kristina Keneally said the family should not be in detention.

"They should be in their community in Biloela," she said.

I’m concerned for Tharunicaa. Her loving parents Nades & Priya & sister Kopi must be so worried. A medical emergency & family separation is the last thing they need.

This family should not be in detention. They should be in the community & #hometobilo https://t.co/T3hcH1ySgF

Greens Senator Nick McKim said the family's treatment had been "appalling and disgraceful".

"They must be resettled in our community urgently, before any more damage is done," he said.

A Melbourne CBD construction site is a key remaining focus for contact tracers as they hunt down virus cases linked to the current Victorian outbreak.

Authorities have confirmed the virus spread from a cleaner who had tested positive to another worker at the ProBuild site at 100 Queen Street around the start of June.

There are 492 close contacts linked to the site, with more than 400 returning negative tests as of Monday night.

Do you work or shop in the Melbourne CBD?

A number of CBD exposure sites have been published online in recent days at https://t.co/SQ5trZH2NI [1/6] pic.twitter.com/xqzGRL8UpV

The department of health is again reminding people who have been to several CBD exposure sites at specified times to get tested, including Woolworths Metro on Little Collins Street, Aki Sushi on Queen Street, and two buildings on Collins Street.

The new cases are all close contacts of existing cases, or people who are in quarantine. There are no fresh exposure sites relating to these cases.

At a press conference on Monday, health authorities said they were on track to lift restrictions on Friday, but have warned Victorians not to expect an immediate return to the relaxed restrictions they enjoyed before the current outbreak.

Scott Morrison has called on the Victorian government to lift lockdown restrictions as soon as possible.

With the Melbourne outbreak relatively under control, there are calls for the state government to act sooner.

Innes Willox from the Australian Industry Group said the prolonged Victorian lockdown seemed increasingly unnecessary and harmful, with only a handful of connected cases each day.

The prime minister also wants Victoria to reopen, particularly for parents with schoolchildren at home.

"Kids have lost enough time out of school over the course of the last 18 months and it's very important we get those kids back to school as soon as possible," he told reporters in Sydney on Monday. 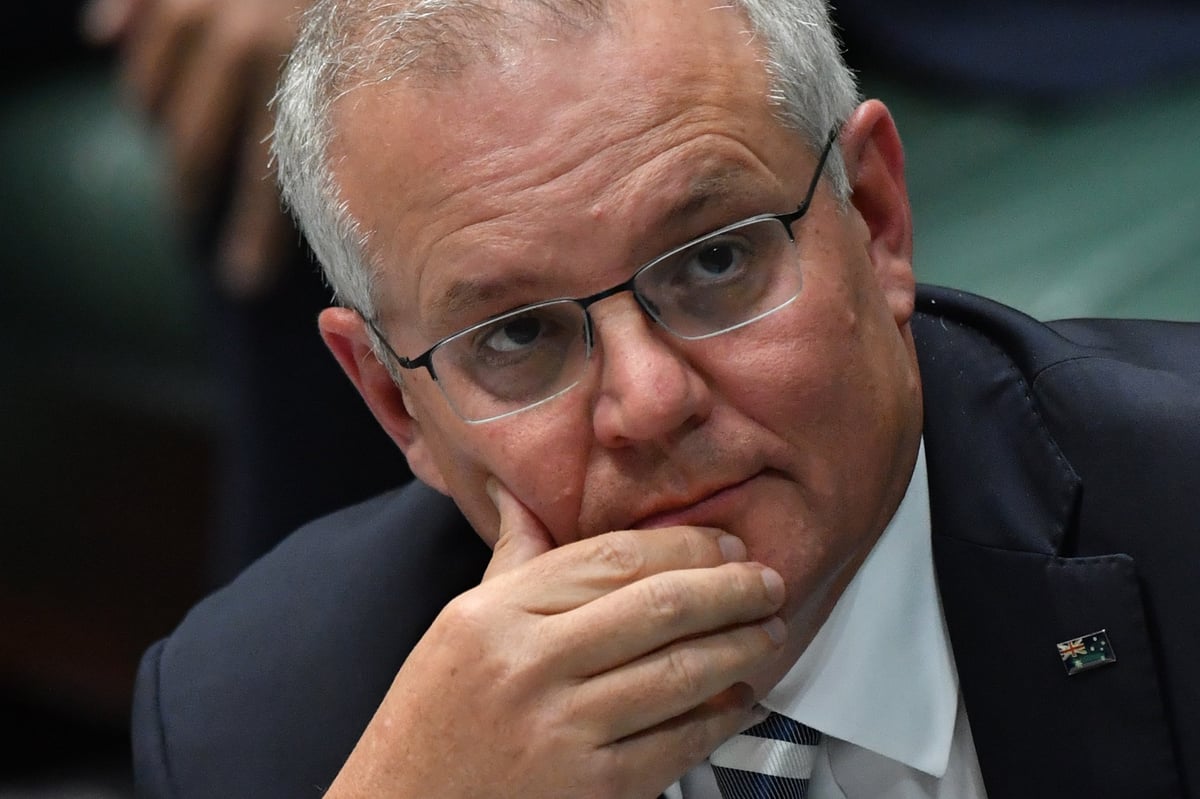 Scott Morrison has called on the Victorian government to lift lockdown restrictions as soon as possible. Image: Getty.

Meanwhile, the prime minister remains under pressure to find alternatives to hotel quarantine, which was the source of the latest outbreak.

He has agreed to fund the construction of a purpose-built quarantine site in Victoria, which will be run by the state government. But the deal will not be easily replicated across the country.

The federal government has roasted a "half-baked" Queensland proposal for a quarantine hub in Toowoomba, arguing it is too far from an international airport or major hospital.

NSW Premier Gladys Berejiklian has also made it clear she will not be following Victoria's lead.

Ms Berejiklian said NSW was already taking as many incoming travellers as it could handle, and if the Commonwealth wanted to boost quarantine capacity in NSW, it would need to build and run the centres itself.

Allegations war hero Ben Roberts-Smith unlawfully killed Afghans on the field of battle have been labelled ludicrous and ridiculous on the first day of a defamation lawsuit.

Mr Roberts-Smith launched the Federal Court civil action in 2018 over media reports he says accused him of murder during his 2009 to 2012 tour of Afghanistan.

The former special forces corporal is suing the publishers of The Sydney Morning Herald, The Age and The Canberra Times over media coverage accusing him of committing unlawful killings in Afghanistan, and assaulting a woman in Canberra.

Ben Roberts-Smith's lawyers say the former SAS soldier has been painted as a bully and war criminal by Nine's newspapers - in the first day of what's been described as the defamation trial of the century. #9Today pic.twitter.com/7MFO7f18Xe

Mr Roberts-Smith denies the allegations and the media companies are relying on a truth defence.

On Monday, Mr Roberts-Smith's barrister Bruce McClintock SC told the court his client's reputation had been torn down by lies and "corrosive jealousy" by "bitter people" who had run a "poisonous campaign against him".

He said other soldiers, one who was described in court as a "total failure" as a soldier, developed "enormous jealousy" at Mr Roberts-Smith's military awards and his Victoria Cross.

"Some may call it tall poppy syndrome, others ... jealousy," Mr McClintock said.

Mr McClintock also rejected claims of domestic violence against his client, saying a facial injury sustained by a woman during a trip to Canberra in 2018 was not caused by his client, but rather due to the woman falling down stairs intoxicated after an official event.

Following Mr McClintock's opening address, which will likely run until the end of Tuesday, it is expected the court will hear from Mr Roberts-Smith as the first witness.

An episode of Four Corners that investigates whether Scott Morrison has ties to far-right conspiracy group QAnon, will air in the next fortnight.

The program, which was supposed to air on Monday night, has been delayed amid controversy.

Scott Morrison and QAnon: What we already know about the prime minister’s connection to a conspiracy theorist https://t.co/dmZOHqKGWO

It has been reported in the past that a QAnon figure is supposedly a family friend of Morrison, and that the figure’s wife is actually on the PM's staff, says Junkee.

Four Corners maintains that it reached out to Morrison on multiple occasions to ask him about the nature of his relationship with the QAnon figure, but had failed to get a response by the time production on the episode had finished.

Once news of the episode broke, however, Morrison told a press conference that he found the Four Corners program "deeply offensive" and in "poor form", and he publicly criticised the ABC for suggesting that he had any "involvement or support for such a dangerous organisation".

A new air date is yet to be announced.

Despite a massive reduction in commuting and in many commercial activities during the early months of the pandemic, the amount of carbon dioxide in earth's atmosphere in May reached its highest level in modern history, a global indicator indicates.

Scientists from the US National Oceanic and Atmospheric Administration (NOAA) and the Scripps Institution of Oceanography at the University of California San Diego said the findings, based on the amount of carbon dioxide in the air at NOAA's weather station on Mauna Loa in Hawaii, was the highest since measurements began 63 years ago.

Carbon dioxide levels peak every May just before plant life in the northern hemisphere blossoms, sucking some of that CO2 out of the atmosphere and into flowers, leaves, seeds and stems.

Monthly average CO2 concentration at Mauna Loa observatory, world's benchmark atmospheric monitoring station, reached a new record 419.13 parts per million in May, up from 417.31 ppm in May 2020.
This is more than just a statistic.#ClimateChange https://t.co/6obisTX75P pic.twitter.com/U1M57vYWlZ

The reprieve is temporary, though, because emissions of carbon dioxide from burning coal, oil and natural gas for transportation and electricity far exceed what plants can take in, pushing greenhouse gas levels higher.

Because carbon dioxide is a key driver of climate change, the findings show that reducing the use of fossil fuels, deforestation and other practises that lead to carbon emissions must be a top priority to avoid catastrophic consequences, Pieter Tans, a scientist with NOAA's Global Monitoring Laboratory, said in a report on the emissions.

- Jeff Bezos will be flying to space on July 20 on the first crewed flight of the New Shepard, the rocket ship made by his space company, Blue Origin.

- Southeast Asian foreign ministers mediating on the crisis in Myanmar have called for its military rulers to free prisoners and start an agreed political dialogue, expressing disappointment at "very slow" progress so far.

Reply
Upvote
1 upvotes
Isn't this clown running the country, or so I am told, supposed to be a Christian?? and he is condoning what is happening to this poor little child from Bilolia?

Reply
Upvote
1 upvotes
@mamamia-user-391653937 He is a joke. That man should not be calling himself a Christian, and neither should anyone else who condones this appalling, disgusting, abhorrent situation that this family is in.