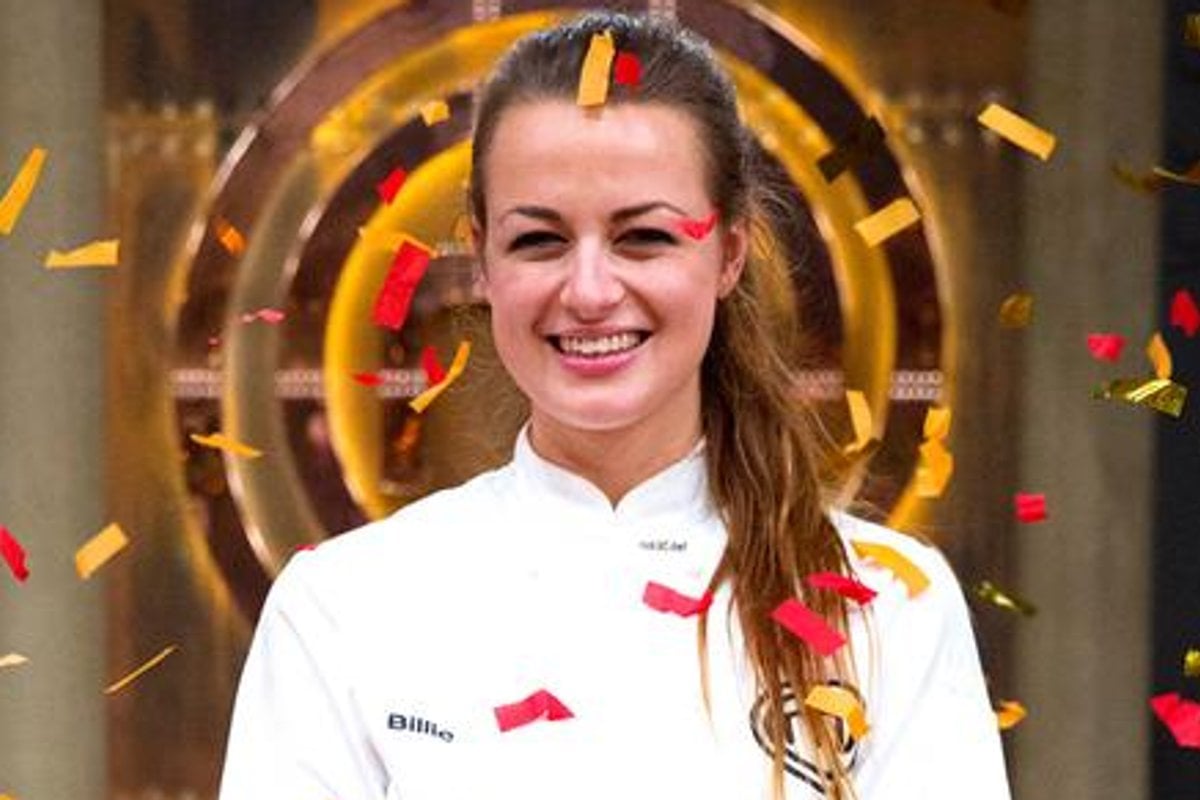 The 31-year-old went up against Sarah Todd in the cooking show's season finale and took home the trophy and $250,000.

As Billie celebrates, here's everything you need to know about the newest Masterchef winner.

One of five, Billie grew up on a dairy farm in New South Wales' mid-north coast.

Before applying for the show, she worked as a restaurant manager in Bowraville, and it was her now-husband Haydn who encouraged her to try out for season seven in 2015.

"Haydn really pushed me to do [MasterChef]. I saw the ads on TV and thought about applying and he said you should apply," Billie told Perth Now.

"I didn’t and missed the deadline," she said.

"The last lot of application rounds came up, and he said, 'Do it! What have you got to lose? You either get rejected and you keep going, or you get a chance at doing it'. So I did, and it was worth it."

During her run, Billie quickly gained a reputation for having the ability to stay calm under pressure, no matter how stressful the MasterChef kitchen got.

She wasn't there for the cameras, or in her words, "to be famous". She just wanted to learn how to cook.

"I never did MasterChef the first time around to [be famous]," Billie told Waseca Foods.

"I have no interest in the television side of it. I might be out on my own in that respect, but I did a cooking competition, which it absolutely is... I tried my hardest to forget about the cameras in my face and focus on cooking, which probably helped me get through it."

She won the season.

Not only did Billie take home the trophy, $250,000 and a new car, she also secured a job offer on the spot from Heston Blumenthal, who is also guest judging the finale on Tuesday night.

The UK celebrity chef told Perth Now it was a "totally spontaneous" decision.

"It was a gut feeling on the day. It was the way she considered everything methodically through the final and the speed and the way she moved round her kitchen and her work. If she was panicking at all, her body language didn’t show it. A real attribute in the thick of service," he said.

"I'm not sure if she wants to pursue a career in a professional kitchen, I just felt it would be a good idea for her to explore."

Within a month of MasterChef concluding, Billie had relocated to England with Haydn, working her way up in Blumenthal's establishment.

According to The Murray Valley Standard, stints in his Heathrow Airport cafe and gastropub led her to the prep kitchen for The Fat Duck, followed by the three-Michelin star restaurant itself.

"Coming out of MasterChef, I had no professional restaurant training, just MasterChef training. That's great in itself, but nothing can compare to restaurant experience," she told the publication.

"The learning curve is huge because the type of food that restaurant puts out is unlike everything I've ever done."

But it never felt hectic: "When it comes to service, it’s so organised and precise," she said.

After eight months of honing her skills for degustation dishes, Billie returned home to pursue her love of cheese-making, working on her family dairy farm with her mother, Alison.

But MasterChef drew her back - she appeared on the show as a guest judge and mentor in various seasons, and returned as a contestant this year.

"I never thought I’d get that chance again, so I was so excited but obviously still scared because that kitchen is a scary place at times," she told 10play.

With what started as 24 contestants, it dwindled down to Billie and Sarah Todd.

Congrats to Billie for pulling off first place, twice!