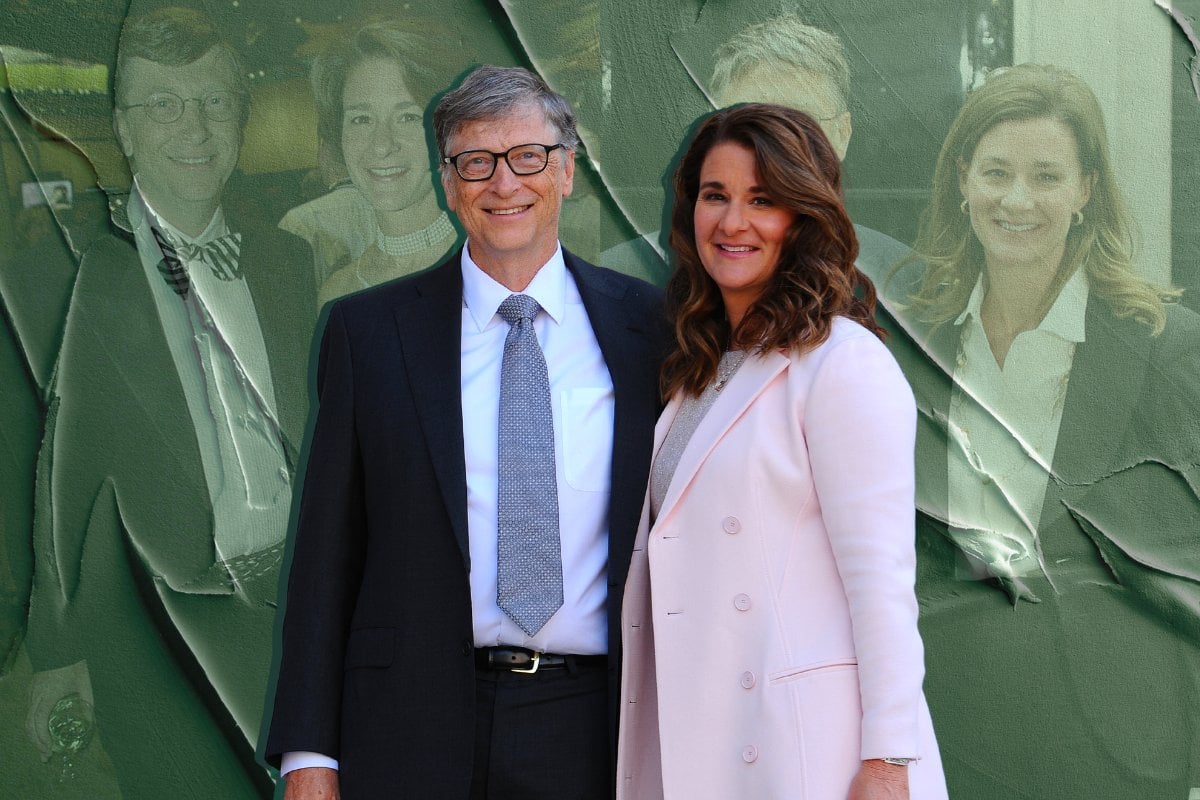 This week, billionaires Bill and Melinda Gates announced they are divorcing.

The Microsoft co-founder and his wife, who launched the world's largest charitable foundation, said they would continue to work together at the Bill & Melinda Gates Foundation.

In identical tweets on Monday, the former couple said they had decided to end their marriage of 27 years.

Watch: The horoscopes during a breakup. Post continues below video.

"We have raised three incredible children and built a foundation that works all over the world to enable all people to lead healthy, productive lives," they said in a statement.

"We ask for space and privacy for our family as we begin to navigate this new life."

The split will have a major impact on philanthropy around the world. At stake is the world's fourth-largest fortune, currently valued at US$145.8 billion, according to the Bloomberg Billionaires Index.

Bill, now 65, and Melinda French, now 56, met at a work dinner, after she began working at Microsoft as a product manager in 1987.

"I was definitely attracted to his brilliant mind, but beyond that, his curiosity," Melinda told Fortune in 2015. "And he has a huge sense of fun. I love that wry side of him."

Their relationship was just casual at first, before they found themselves at a crossroads.

"She had other boyfriends, and I had Microsoft," Bill said in 2019 Netflix series Inside Bill's Brain.

"We were like, 'Hey we are not really serious about each other, are we? We are not going to demand each other's time.'"

Melinda felt the same: "I was new to Microsoft, there were a lot of men there and ... you are still looking around." 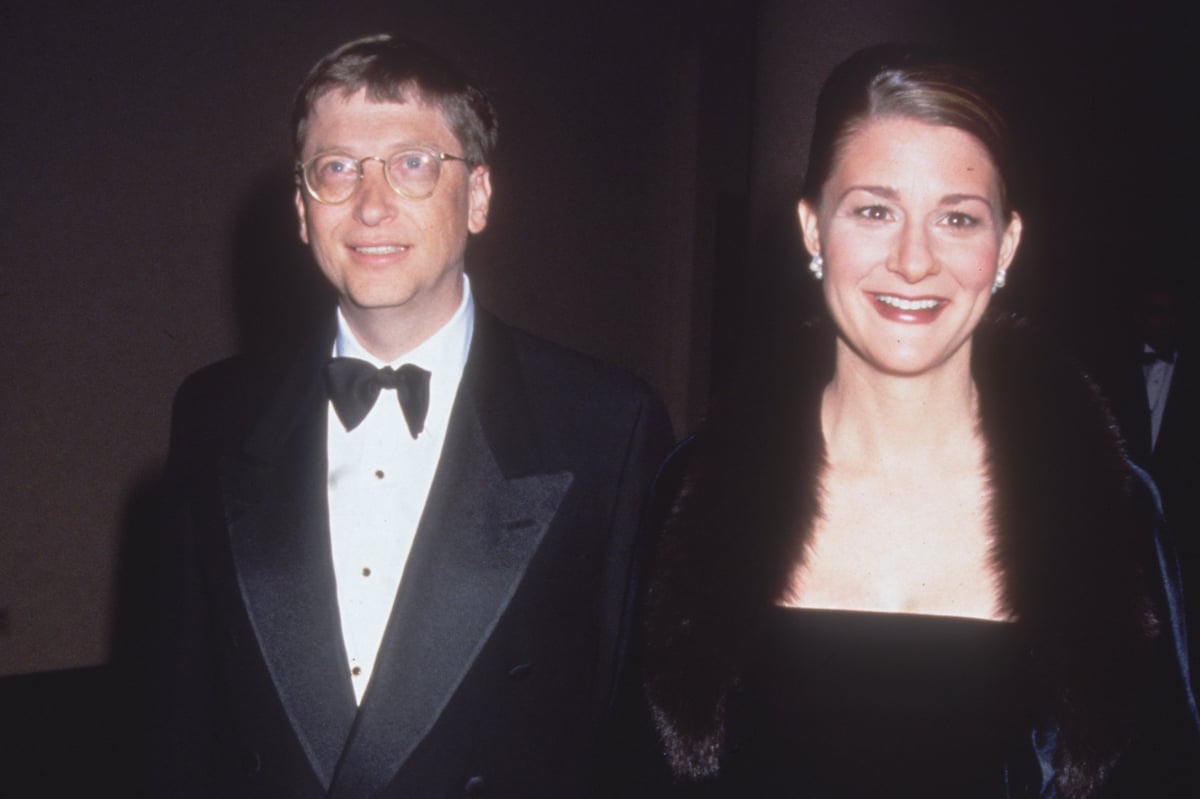 But after about a year, "sort of to our surprise, certainly my surprise, we said, 'Hey, I love you'," Bill said.

"And she said she loved me and then it was like, 'Wow, and now what is going to happen?... You know, we cared a lot for each other and there were only two possibilities: either, we were going to break up or we were going to get married."

Bill took the commitment of marriage seriously, and was worried that he would not have enough time to dedicate to a marriage while still running Microsoft.

One day, Melinda walked into his bedroom to find him making a list: "His whiteboard had the pros and the cons of getting married," she recalled, laughing.

The pros must have been longer than the cons, because on New Year's Day 1994 they married in Lanai, Hawaii.

The wedding was kept extremely secret, costing more than US$1million. Gates had bought out all the available rooms at the island's 250-room hotel to keep media from staying there and reportedly hired out all the helicopters on Maui to keep photographers from flying over the wedding.

They have two other children: son Rory, 21, and daughter Phoebe, 18.

For both Bill and Melinda, equality in their relationship was important.

"We certainly weren't working as equals when we started together. I was down several levels at Microsoft, and he was the CEO," Melinda recalled to Fortune.

"We've had to change to really be coequals. It's not something that immediately happens overnight, but we're both committed to it. We needed to talk behind the scenes when it wasn't working. But I think that's come now."

In 2019, she told CNBC that they had to work to ensure they weren't falling "back into our own sort of biases about who does what".

She gave an example of the conversations that took place when eldest daughter Jennifer was starting school.

They'd enrolled her in a school that meant a 45 minutes round-trip, but Melinda realised that would mean she'd waste a lot of time waiting in traffic, so she suggested a school closer to home, but Bill was convinced they'd found the perfect school.

"So Bill said, 'What could I do? What could I do to make it easier?' And I said, 'Well, you could drive,'" she explained. So he did, and they shared school drop-off duties.

"Three weeks in, I started to notice more dads were driving and showing up with their kids," Melinda recalled. "And a mum said to me, 'Do you see what’s going on here?' And I was like, 'Well, I don't know. More dads are dropping off.

"And she says, 'Yeah, we went home with our hands on hips and said, 'If Bill Gates can drive his kids to school, then by gosh, you can too!'"

Since news of their divorce broke, it has come to light that Bill holidays every year with his ex-girlfriend, Ann Winblad, a tradition that started when they began dating in 1984 after meeting at a computer conference.

The tradition to spend a long weekend together at a cottage in North Carolina continued after the pair broke up in 1987 and according to a 1997 Time profile, the holidays with Ann was part of the deal when he married Melinda.

“We can play putt-putt while discussing biotechnology,” Bill said of his weekend getaways with Ann, who is a software expert and venture capitalist from Seattle.

Ann added to Time, “We share our thoughts about the world and ourselves.

“And we marvel about how, as two young overachievers, we began a great adventure on the fringes of a little-known industry and it landed us at the centre of an amazing universe." 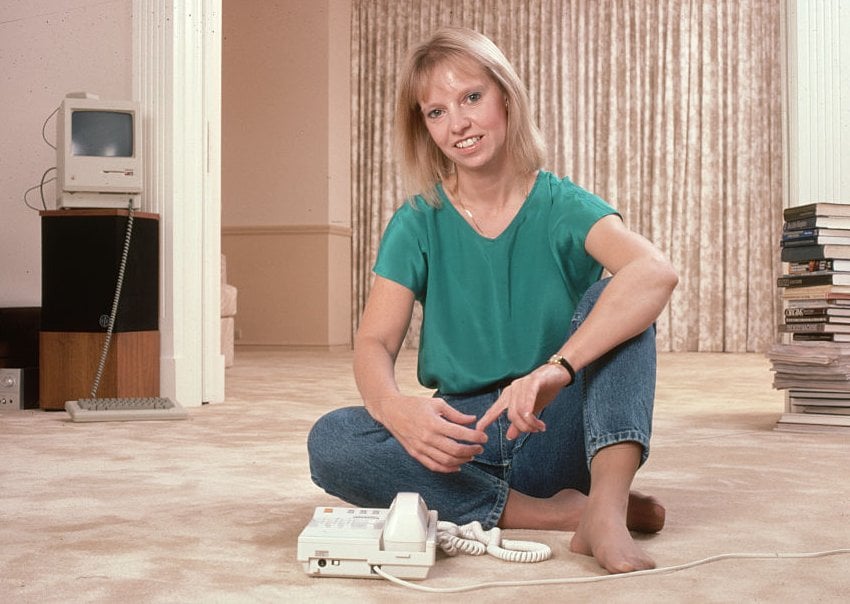 Ann Winblad, an entrepreneur and businesswoman, in 1984. Image: Getty.

The pair are so close that Bill sought Ann's advice before proposing to Melinda.

“When I was off on my own thinking about marrying Melinda, I called Ann and asked for her approval,” he said.

Ann approved, recalling, “I said she’d be a good match for him because she had intellectual stamina.”

The Gates are among the world's most prolific philanthropists. The Bill & Melinda Gates Foundation was launched in 2000, a merging of two previous Gates' foundations, the William H. Gates Foundation and the Gates Learning Foundation.

It is easily the most influential private foundation in the world, with an endowment worth close to AU$64 billion.

In 2008, Bill gave up much of his day-to-day work at Microsoft to focus on the foundation, alongside his wife. 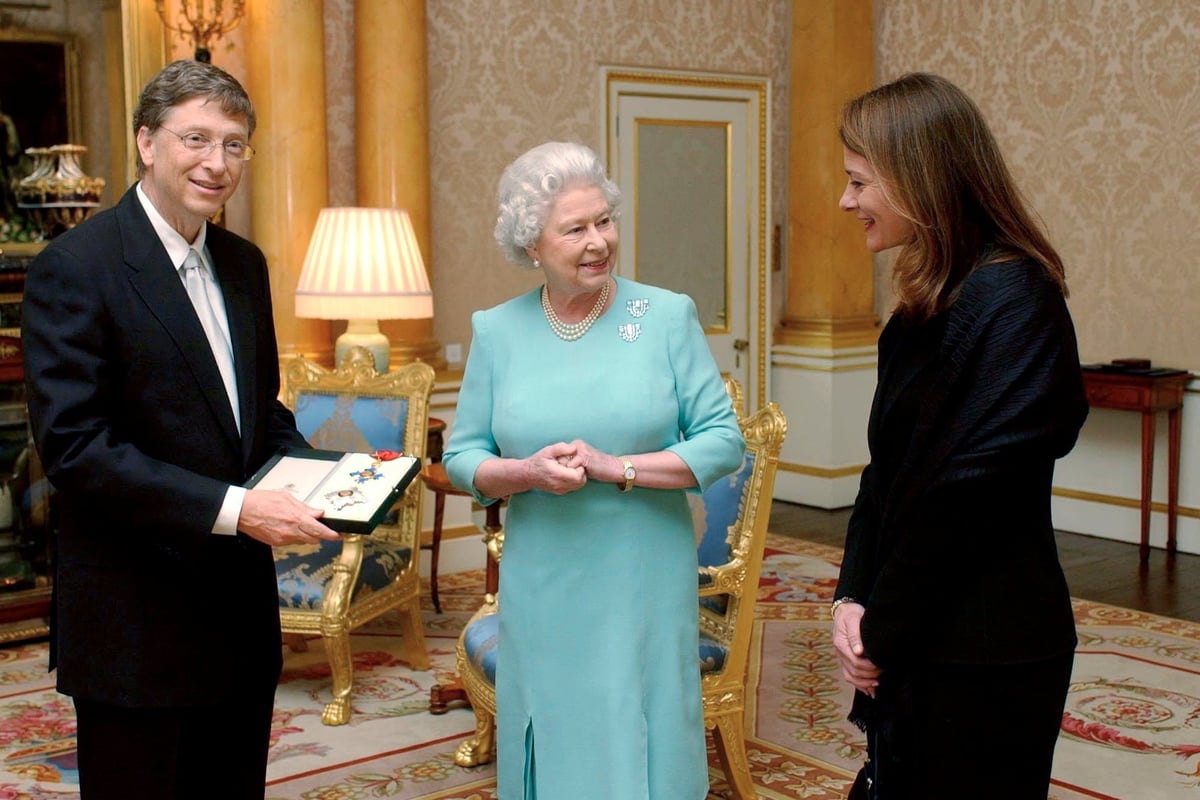 Melinda said in their 2018 annual letter that when Bill first came to the foundation, he was used to being in charge.

"I'd stayed home with our kids, so I was restarting my career," she wrote.

"There were times I felt that disparity - in meetings when I was reticent and he was voluble, or when the person we were meeting with looked toward Bill and not me. It's always been important to us that we are equal partners in our foundation's work. We've learned over time to give each other feedback at home about times in the office when we didn't meet that goal. And we're better for it."

Bill agreed: "Our occasional disagreements these days are over tactics. Because I've been a public figure longer, and because I'm a man, some people assume I am making the big decisions. That's never been the case.

"Some people see Melinda as the heart of our foundation, the emotional core. But just as she knows I'm more emotional than people realise, I know she's more analytical than people realise. When I get really enthusiastic about something, I count on her to make sure I'm being realistic... We are partners in both senses that people use the word these days: at home and at work." 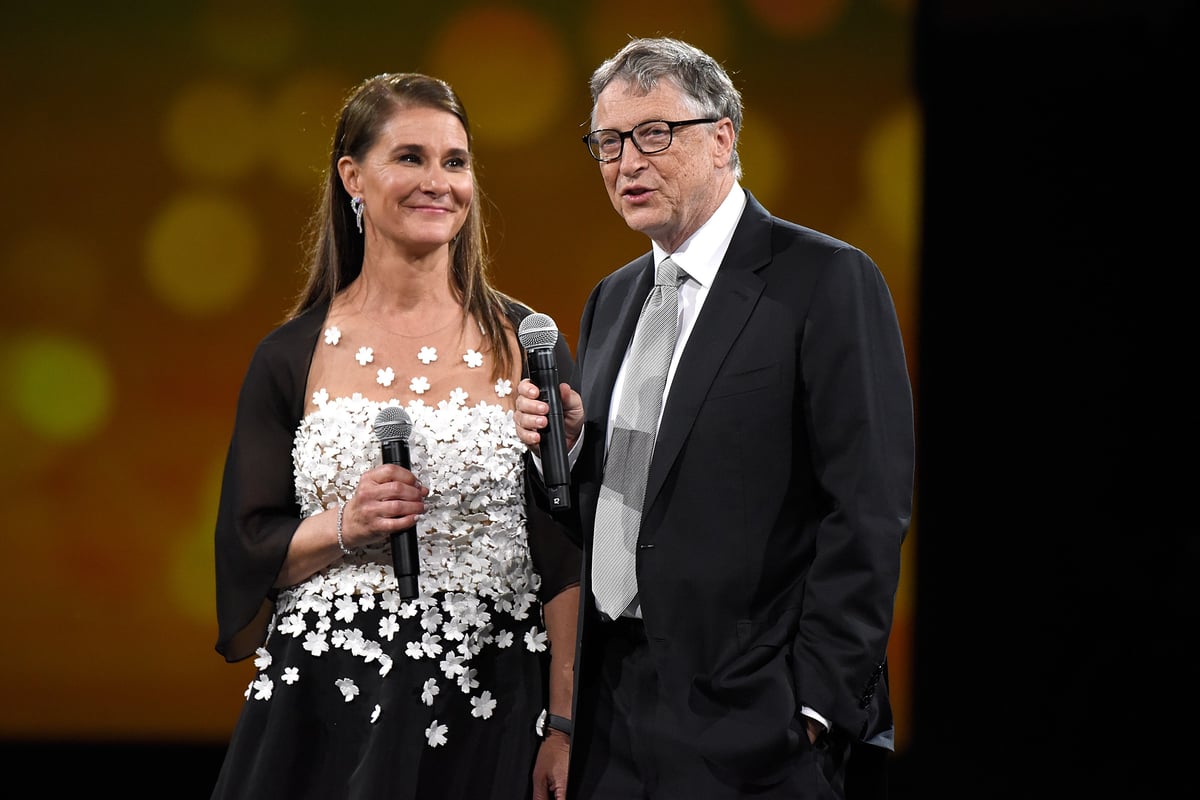 The couple said in the statement announcing their divorce they would continue to co-run the foundation, which works on global health and development issues like eradicating polio, improving sanitation systems in impoverished countries and developing clean, affordable energy.

In 2020, the Gates Foundation established the COVID-19 Therapeutics Accelerator to hasten the development and evaluation of drugs for patients with COVID-19.

The foundation pledged US$250 million to the World Health Organisation at the beginning of the pandemic.

The Gates' separation comes two years after Amazon founder Jeff Bezos and ex-wife Mackenzie announced their divorce, but the Gates' wealth could be much more complex to carve up.

Most of Bezos' wealth was concentrated in Amazon stock, but Microsoft stock makes up less than 20 per cent of Bill's assets. Instead, he's shifted most of his wealth into the Bill & Melinda Gates Foundation.

Last year, Bill, formerly the world's richest person thanks to co-founding Microsoft in 1975, said he was stepping down from the company's board to focus on philanthropy.

He was Microsoft's CEO until 2000 and since then has gradually scaled back his involvement in the company he started with Paul Allen in 1975.

He transitioned out of a day-to-day role in Microsoft in 2008 and served as chairman of the board until 2014.

Reply
Upvote
Proof positive that all the money in the world can't bring you happiness.
C
cat a year ago