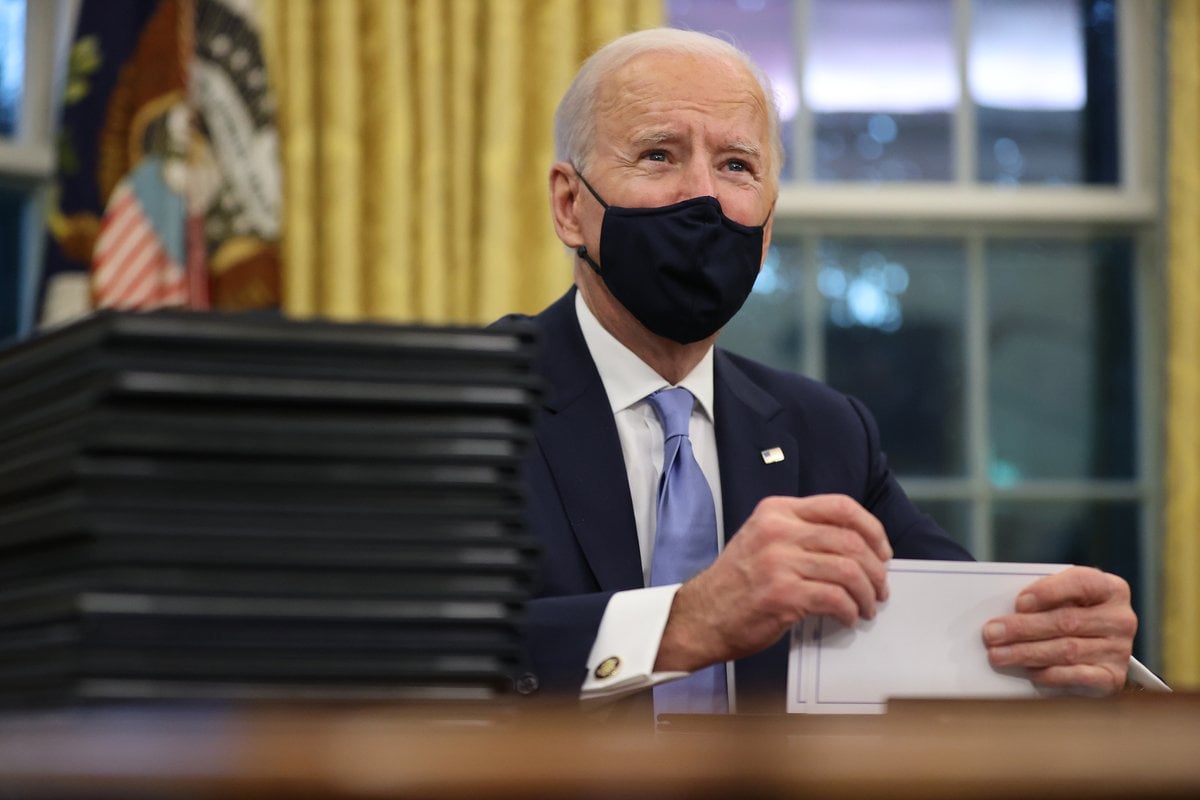 US President Joe Biden is only hours into his new job, but he's already begun dismantling the legacy of the Trump administration.

He has signed his first executive orders, reversing some of Donald Trump's policies on immigration, climate change, racial equality and coronavirus.

In his inauguration speech, Biden offered a message of unity and restoration to a deeply divided country reeling from a battered economy and the raging pandemic, which has killed more than 400,000 Americans.

"To overcome these challenges, to restore the soul and secure the future of America, requires so much more than words," he said.

"It requires the most elusive of all things in a democracy: unity.

"We must end this uncivil war that pits red against blue, rural versus urban, conservative versus liberal. We can do this. If we open our souls instead of hardening our hearts."

The themes of Biden's 21-minute speech mirrored those at the centre of his presidential campaign, when he portrayed himself as an empathetic alternative to the divisive Trump, a Republican.

He then began signing 15 executive orders from the Oval Office, the first related to the coronavirus pandemic. He said there was "no time to start like today". 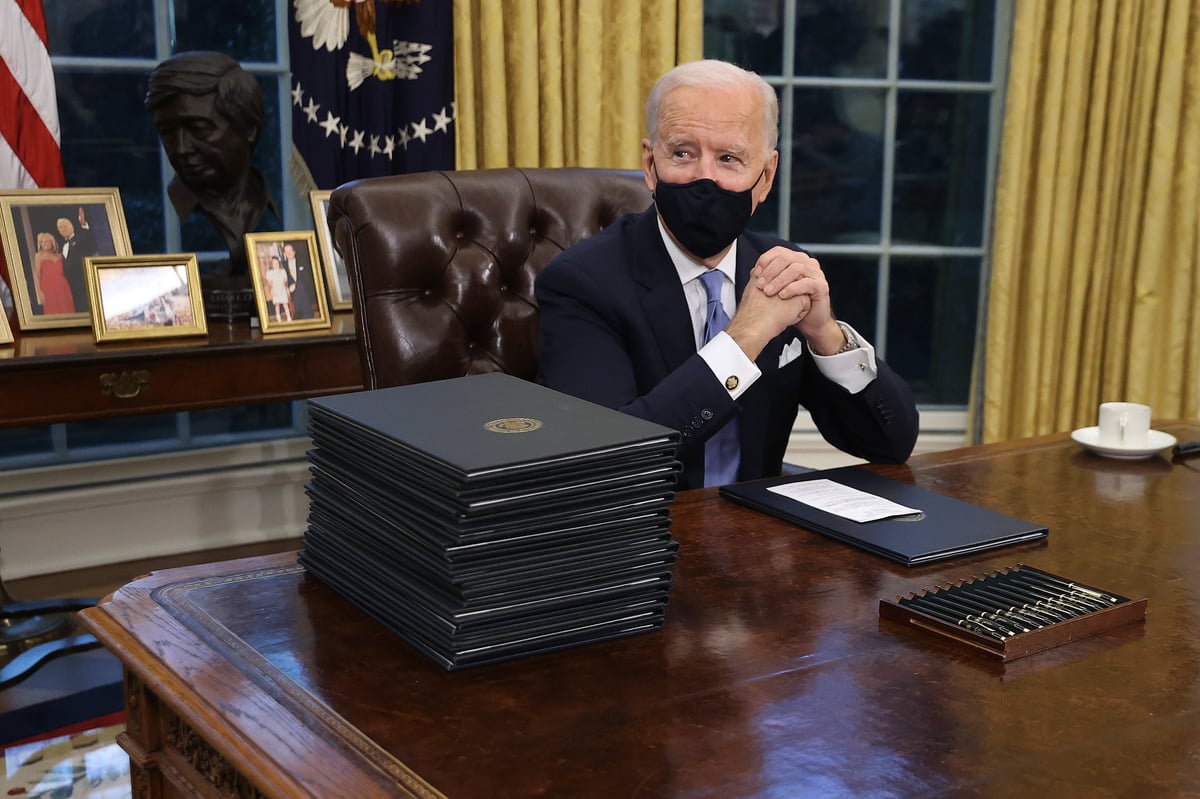 Biden also signed an order for the US to rejoin the Paris climate accord, undoing the move made by Trump to leave the agreement.

The steps Biden is taking will also end a travel ban Trump put in place on some majority-Muslim countries.

In total, he signed 15 executive orders and two directives during his first day as president. Here is what he has done:

President Joe Biden's first executive order was the '100 days masking challenge', mandating masks and social distancing in federally owned properties and on all federal land in the USA.

The president cannot tell states or cities what to do with their own mask laws, but Biden has called on governors, mayors and other leaders to implement mask rules.

The order symbolises a sharp turn from the Trump era, which famously shunned or downplayed the need for masks during the COVID-19 pandemic. Throughout the election campaign, Trump mocked Biden's use of masks.

Biden has signed an executive order appointing Jeffrey D. Zients as the official COVID-19 response coordinator who will report to him as part of his effort to "aggressively" gear up the US response to the pandemic.

The order also restores the directorate for global health security and biodefense at the National Security Council, a group Trump disbanded.

Donald Trump's border wall - and his plan to get Mexico to pay for it - is one of his most infamous policies, and it has been an epic failure over the past four years.

As of January 8, 2021, the US Customs and Border Protection (CBP) says 729 kilometre of the wall had been complete, less than half of the 1600kms promised by Trump in 2016. Plus, most of this 700km was actually replacing barriers built by other administrations.

Only 128kms of new wall was built, according to the CBP.

And uh, Mexico hasn't paid for a thing.

On Wednesday, President Biden terminated the national emergency funding declaration used to fund the wall along the Mexican border.

He told NPR last year: "There will not be another foot of wall constructed on my administration."

Deferred Action for Childhood Arrivals came into effect in 2012, shielding undocumented immigrants who came to the US as children, known as 'dreamers' from deportation.

In 2017, Trump tried to terminate the program. He was blocked by the Supreme Court but since then, his administration has continued to try to limit it.

Biden signed a presidential memorandum directing the Homeland Security secretary to preserve it. The order also calls on Congress to enact legislation providing permanent status and a path to citizenship for these immigrants.

Biden has moved to reinstate the US to the Paris Climate Agreement.

The executive action will see the US rejoin the international effort against climate change, following a 30-day notice period.

Trump withdrew the US - the world's second largest emitter of greenhouse gases - from the agreement in November 2020, after filing its intent one year earlier.

Biden has also stopped the United States' withdrawal from the World Health Organization, and appointed the nation's top infectious diseases expert Dr Anthony Fauci to the head of the delegation to the WHO.

Trump announced his intention to withdraw from the WHO in 2020, blaming the global body for its early actions during the coronavirus pandemic and claiming it relied too heavily on US funding.

In 2017, Trump restricted entry into the United States to citizens from seven mostly-Muslim nations: Iran, Iraq, Libya, Somalia, Sudan, Syria and Yemen. Iraq and Sudan were then removed from the list, which added North Koreans and certain Venezuelan government officials.

Biden has reversed the order. He has also asked the State Department to restart processing visas for passport holders from the affected countries, and to look into ways to address the harm caused to those prevented from coming into the US due to it.

President Obama vetoed the Keystone XL pipeline - an expansion of a pipeline transporting crude oil between Texas and Alberta, Canada - in 2015, but Trump reversed this decision.

9. Reverse the expansion of immigration enforcement.

Trump drastically ramped up the work of the US Immigration and Customs Enforcement agency (ICE), ordering ICE to find and deport unauthorised immigrants on a major scale.

Many on the left want ICE abolished, but the Democrats are unlikely to go that far anytime soon.

However, Biden did reverse Trump's order.

Days before the November 2020 presidential election, Trump established the 1776 Commission, claiming the goal of the 18-member group was to write a report on the "core principles of the American founding".

It was in direct response to the Black Lives Matter demonstrations of the previous months, which he blamed on "left-wing indoctrination in our schools".

Biden has extended the existing pause on student loan payments and interest for Americans with federal student loans until at least September 30, 2021.

He has also extended the existing nationwide moratorium on evictions and foreclosures until at least March 31.

Biden signed an executive order reinforcing Title VII of the US' Civil Rights Act of 1964. It requires the government does not discriminate on the basis of sexual orientation or gender identity.

It is a policy that reverses action by Trump's administration.

The president is also reversing a ban on diversity training at federal agencies and contractors and plans to roll back a ban on transgender people serving in the military within the next few weeks.

14. Allow non-citizens in the census.

Trump signed an order that sought to exclude illegal immigrants and non-citizens from future United States' censuses. Census data is used to reallocate each state's share of electoral votes and the 435 seats in the House of Representatives.

15. Extend deferrals of deportation for Liberians.

George W. Bush set up DED in 2007 allowing certain Liberians facing conflict or natural disaster to stay and work in the US. The program had been regularly extended but in 2018, Trump announced his intention to end it with a wind-down period.

Biden has revoked the Trump Administration's regulatory process executive orders, and prevented any regulations Trump tried to finalised before his term ended from moving forward until they have been reviewed.

Biden signed an executive order for federal employees to take an ethics pledge.

The order restricts appointees from lobbying their former agencies upon leaving the government for two years and stops them from communicating with the former agencies and senior White House staff.

It also prohibits them from becoming registered foreign agents and "shadow lobbying", by prohibiting individuals from working behind the scenes to lobby for a year after leaving.

We hope Biden's getting a good nights sleep because... phew. That's only day one.