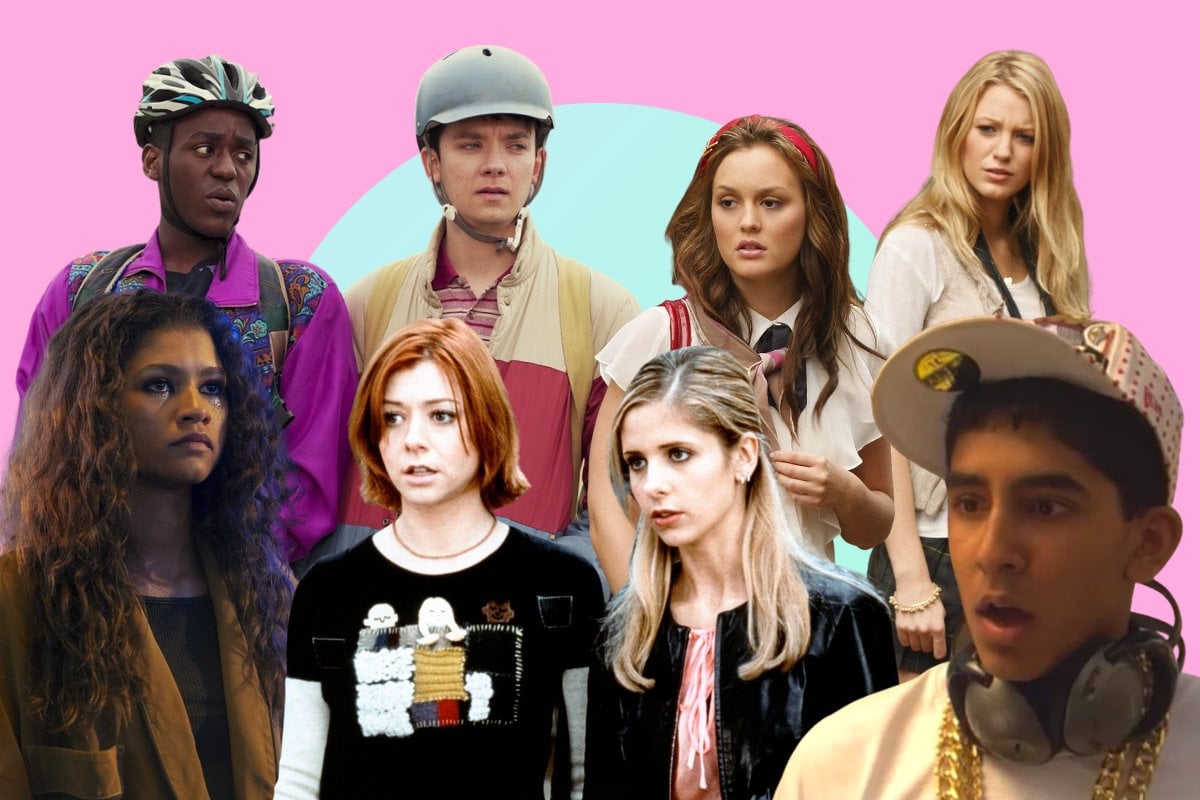 The teen years are... brutal, and that's exactly why they make such great television.

The golden era of teen dramas was the 2000s, when every second show on TV featured good-looking people who really screwed our expectations of what 16-year-olds look like. The time period brought us instant classics, including so many of the genre's biggest titles: Gossip Girl, One Tree Hill and The O.C.

I still remember the excitement of being a 12-year-old who was allowed to watch the latter, which in hindsight seems like a questionable parenting decision, and rocking up to school on a Monday fizzing to discuss whatever harmful thing Marissa Cooper had done this time. It was formative!

Even if we haven't all lived in the Upper East Side or fallen in love with two hot brothers who also happen to be vampires, we have all been angsty teenagers, which is perhaps why teen dramas are so enduring.

In recent years, the genre has had a major resurgence with some incredible new shows made for the streaming generation. Which brings me... here. To a top 10 ranking, of the best teen dramas of all time.

It's been more than two decades since Joey first climbed in Dawson's bedroom window, and what followed was six seasons of problematic storylines, emotional cliffhangers, and lots of close-ups of Dawson crying.

Dawson's Creek presented teenagers in a new way and was one of the early pioneers of the teen drama genre's golden age: the teens of Capeside were more adult than child, and the dialogue matched this, packed full of pop culture references and wisdom.

It gave us one of the most hotly debated love triangles of the era, precisely 1000 moments to cry over, and aired what is considered to be the first "passionate" gay kiss aired on television.

Watching Dawson's Creek now is like hopping in a time machine to the 90s, and honestly, that's exactly what we need sometimes.

You can be transported to fictional Massachusetts via Netflix.

FOR THE LOVE OF ALL THAT IS HOT AND SPANISH, PLEASE WATCH THIS SHOW.

I have been yelling at everyone to watch Elite since its first season came out in 2018, and I will continue to do so until enough people realise this Spanish teen thriller-mystery is one of the best damn shows of recent years.

Elite is set in Las Encinas, a fictional elite secondary school in Madrid and revolves around the relationships between three working-class students enrolled at the school through a scholarship program and their wealthy classmates. On the surface, it's a lot of partying and drugs, but the show explores really important topics like sexuality, religion and classism throughout.

Each season revolves around a murder or crime, and it follows the style of shows like How To Get Away With Murder by dropping a new clue in each episode, until it all comes together in the final episode of a season. Plus, there are plenty of twists to keep you guessing.

Basically, it's one of Netflix's greatest gems, definitely in my top five Netflix originals, and it's hiding in plain sight.

Sex Education is another of the best things to come out of Netflix. The British comedy is hilarious and touching and diverse in ways we've never seen before.

There are gay characters! Pan characters! Asexual characters! Characters with vaginismus! A black, gay male lead! Disability representation! A careful exploration of consent! A bus scene so touching it will make you cry!

Sex Education has all of it, plus Gillian Anderson as a sex therapist.

Sex Education aims to bust stigmas and raise awareness of the issues teenagers face, in a light-hearted and funny yet emotionally intelligent way. Big yes.

I'm pretty sure the only things more angsty than teenagers are... vampires. So imagine the angst when you put them both together.

The Vampire Diaries arrived in 2009, in the time of Peak Vampire. Following high schooler Elena Gilbert (Nina Dobrev) after the loss of her parents, she meets Super Hot Vampire Brothers Stefan (Paul Wesley) and Damon Salvatore (Ian Somerhalder) and the rest, as they say, is history (history filled with love triangles and being hunted by a vampire who looks EXACTLY like you, but  ¯\_(ツ)_/¯).

The early seasons of The Vampire Diaries are near perfection, and it definitely jumped the shark after Dobrev's exit (and perhaps even a little... before that), but TVD is high stakes and gave us one of the best Millennial love triangles. Team Damon till I die, tbh.

Stan, Netflix and Prime Video all have your hot vampire fix, ready and waiting.

Euphoria is the latest in a long list of teen dramas to outrage the adults, which only increased the interest in Zendaya's dark series. The best type of own goal.

If people tuned in to see what all the fuss was about (a scene featuring 30 full frontal penises, FYI), they stuck around the see the incredible nuanced portrayals of Rue, a young addict, Jules, a transgender teenager searching for where she belongs and the other teens in their orbit.

It's brutal and uncomfortable at times, tackling mental health, sexuality, gender identity, body image and fatphobia, domestic abuse, drug use and trauma, but it has really touching, hopeful moments too.

Zendaya won the 2020 Emmy for Outstanding Lead Actress in a Drama Series for her performance as Rue, marking a major shift given the awards had previously ignored teen dramas. Hopefully this a sign of future recognition for the genre, which is so important to young people figuring out their identities.

Euphoria is streaming on Binge.

Of all the shows on this list, Gossip Girl is the one I've watched the most. I've watched it a lot, the whole way through, over and over and over. Yeah, even season five, where the writers tried to make Blair and Dan happen. Shudder.

Following a group of obscenely rich kids on New York's Upper East Side (and poor ol' Dan Humphrey), Gossip Girl is nasty and bratty and sexy.

It's also fun to check the ensemble cast, which includes many big names: Sebastian Stan as Carter Baizen, Lady Gaga as... a less famous Lady Gaga and uh... Jared and Ivanka Trump.

Watch: Seriously, what a time that was. Post continues below video.

Time has not been kind to a lot of the storylines (seriously, can these GROWN MEN please leave teenage Serena ALONE?), the show officially jumped the shark in later seasons and had potentially the worst finale reveal EVER, but still, our love for Gossip Girl endures.

You can visit the Upper East Side on Stan, Netflix and Binge.

Please don't come for me, marshmallows.

Veronica Mars fans are so powerful, they initiated a movie based on the show and got it back on screen for a fourth season well over a decade after it ended the first time. They ended up with a VERY controversial finale, but goodness, the passion was something to behold. So I am slightly... scared of the reaction to their show narrowly missing out on a top three spot.

And it's easy to see why they love the show so much. When Veronica Mars premiered, it was unlike anything else we'd seen on screen before.

Veronica Mars follows, uh, Veronica Mars (Kristen Bell), a high school outsider turned detective who solves mysteries and delivers a damn good one-liner. The show effortlessly switches from humour to drama, and offered up social commentary on everything from the class system to rape culture and small-town politics.

Grab your marshmallows (sorry not sorry) and get comfy, because all four seasons are available on Stan.

I didn't realise I was a sheltered child until I watched Skins.

The British series was probably the boldest of its time, giving a much grittier look into the lives of teens than we'd previously seen on TV as it followed the lives of three 'generations' of characters.

There were plenty of sex and party scenes, but Skins was also unafraid to tackle really serious issues in ways we had never seen before: bullying, mental illness, eating disorders, sexuality and more.

Plus, Freddie's death continues to haunt me 11 years later. It's my most devastating TV death ever and I'll never get over it.

The Skins' legacy is clear in the 2010 Tumblr archives all of noughties teens, in newer TV shows like Sex Education and Euphoria, and in the success of its cast, which includes Daniel Kaluuya, Dev Patel, Nicholas Hoult, Hannah Murray and Joe Dempsie.

Just make sure you stick to the UK version. The US adaption is... horrific.

Skins is streaming on Stan.

The pilot of The O.C. might be the perfect episode of television, and from there, the show became a cultural phenomenon.

Following one of our favourite ever tropes, 'bad boy from the wrong side of tracks thrown into the lives of rich and privileged people', The O.C. is about Ryan Atwood (Ben McKenzie), who is adopted by Sandy and Kirsten Cohen.

Ryan, Seth Cohen (Adam Brody), one of TV's greatest characters and the reason all my teenage crushes were geeky, and their love interests Marissa Cooper (Mischa Barton) and Summer Roberts (Rachel Bilson) get up to all sort of mischief. Some of it is wholesome but most of it is not.

The show's use of meta-humour is legendary, and its cultural impact strong enough to make Chrismukkah a thing.

The O.C. is streaming on Stan.

Long before Edward Cullen sparkled, there was Spike.

Buffy the Vampire Slayer made a generation of teens wish they also had to juggle worrying about school and the slaying demons, as we watched Buffy (Sarah Michelle Gellar) and her pals do just that every episode.

Buffy is a flawed, multi-faceted hero unlike any we'd ever seen before. She was a loyal friend, powerful and funny, even when driving a stake through a vampire's heart. That many layers is still not guaranteed of female characters today, and at the time was completely revolutionary. No wonder she's become a feminist icon.

Buffy also assured its longevity by successfully transitioning its characters out of high school, which is a surprisingly rare thing in teen dramas. Remember when the Gossip Girl core-six finished high school, enrolled in college and then never, ever went? Buffy much better integrated the growing up of its characters - and its audience - which is part of why it's such a cult favourite.

Okay, I've just convinced myself of another re-watch. Conveniently, you can catch all seven seasons on Stan.

...Are we all okay? Have I massively offended any particular fanbase with this? I apologise profusely, I guess.

A few honourable mentions before I sign off: the classic One Tree Hill, one of Netflix's most watched originals On My Block and Australia's very own Blue Water High.

Compiling this list has me feeling like I'm a 16-year-old with a crush on Chace Crawford again. How good are teen dramas? At what point in adulthood do you stop... relating to them? Are you ever too old to see what the adult writers think The Kids are getting up to these days?

Right. Back to being a nearly 30-year-old woman waiting patiently for the next season of Euphoria.

How much do you agree or disagree with this ranking? What's your favourite teen drama? Come at me...

Reply
Upvote
2 upvotes
My favourite teen dramas predated all of these. Degrassi Junior High and Degrassi High, which I watched as re-runs and homegrown Heartbreak High.

Reply
Upvote
@sagegal  I loved Degrassi so much! Some of the topics were quite controversial for the time, too.
M
mamamia-user-482898552 5 months ago

The golden era of teen dramas was the 2000s, when every second show on TV featured good-looking people who really screwed our expectations of what 16-year-olds look like