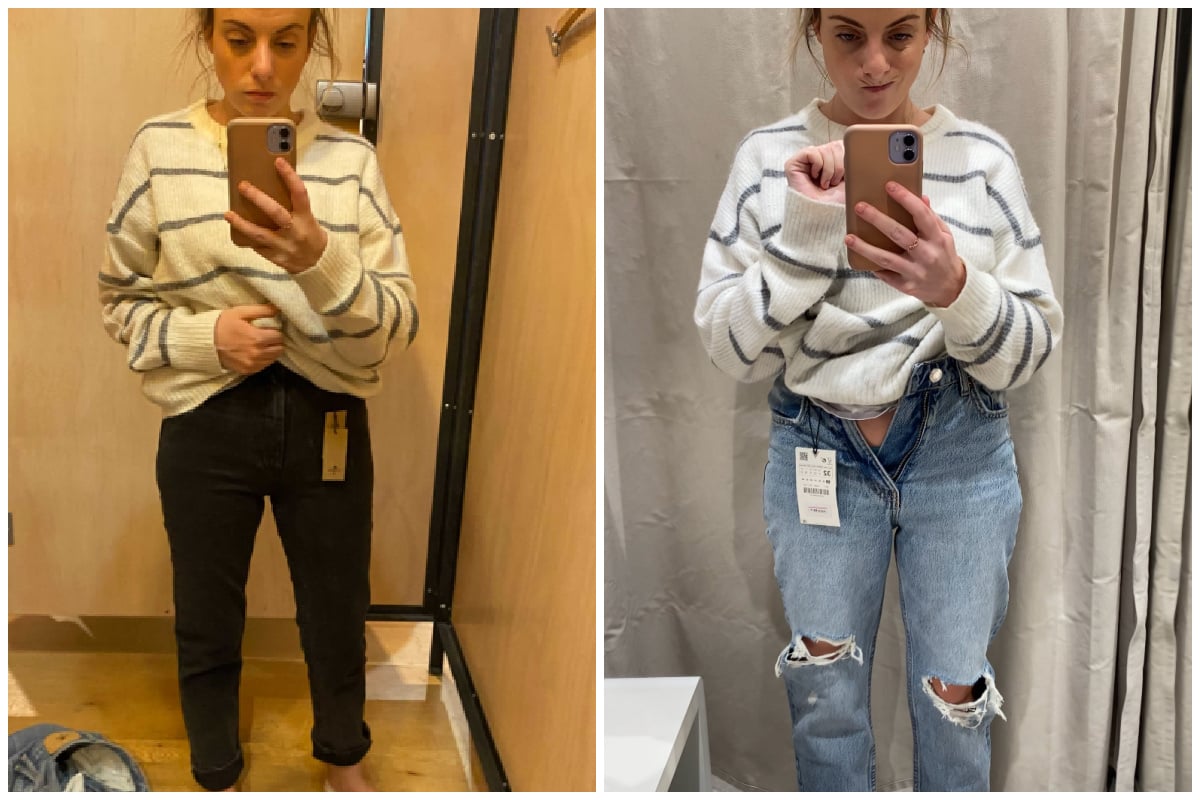 For months now, a resounding, slightly rude message has been following me everywhere I go: skinny jeans are out.

It whispers in my ear when I'm at Westfield, spilling out from the shop windows. Skinny jeans are not cool anymore, lady, says the disembodied voice. We don't care that you've spent the better part of a decade buying the exact same style of jeans in slightly different colours. Gen Z somehow gained a weird amount of power and turned fashion on its head.

When I'm out with friends, the voice gets louder. It's not just capitalism that's sh*tting on my choices, it's the subtle messaging from everyone around me. Non-skinny jeans have a... vibe, in that they're silently communicating that they're better than you. I don't need to be tight to be flattering, they say. Am I even flattering? Maybe I don't even care.

So like the self-assured, independent, mature person I am, I threw all my skinny jeans in the bin* and dedicated an unhealthy amount of time to finding non-skinny jeans that don't look ridiculous on a very short woman.

*Note: I did not throw my skinny jeans in the bin. That would be wasteful.

For context, jeans generally are a nightmare for me. Last time I checked, I wasn't quite 5 foot. I say that as though I may have grown, but given I'm 30 it's unlikely. I have hips but no bum, which confuses every pair of pants I put on. They either fit on the hips but are baggy, or fit my legs fine but don't do up.

I had finally figured out what brands worked on me for skinny jeans, then the fashion gods struck me down. Personally. With the loose jean trend.

So here are all the styles I've tried on (including some for the lols), and the ultimate winners:

I tried on a few pairs of jeans from Zara after being told they had the biggest range of styles and were the most affordable.

But um. Let's take a look together. As a family.

First, I tried the 'Mom' style:

Interesting. But... no. Image: Supplied.

I actually didn't mind the colour, but there were two rather insurmountable problems:

1. I can't with rips at the knee. In winter. It's cold and the air gets in there and what's the point in wearing pants if my legs are cold?

2. The button wouldn't do up at the waist. And they were baggy enough without having to go up a size to fit my hips in.

I then tried a wide leg style that looked comical.

Hi, my name is Clare and I no longer have a torso. Image: Supplied.

I LOOK SO SHORT. WHO ARE THESE FOR.

It doesn't help that I also have boobs so it's not like I can make my legs the 'statement' and really downplay my top half.

On another occasion, I tried more of a Slim Fit at Zara, but faced the same aforementioned problem of not being able to do the button up. 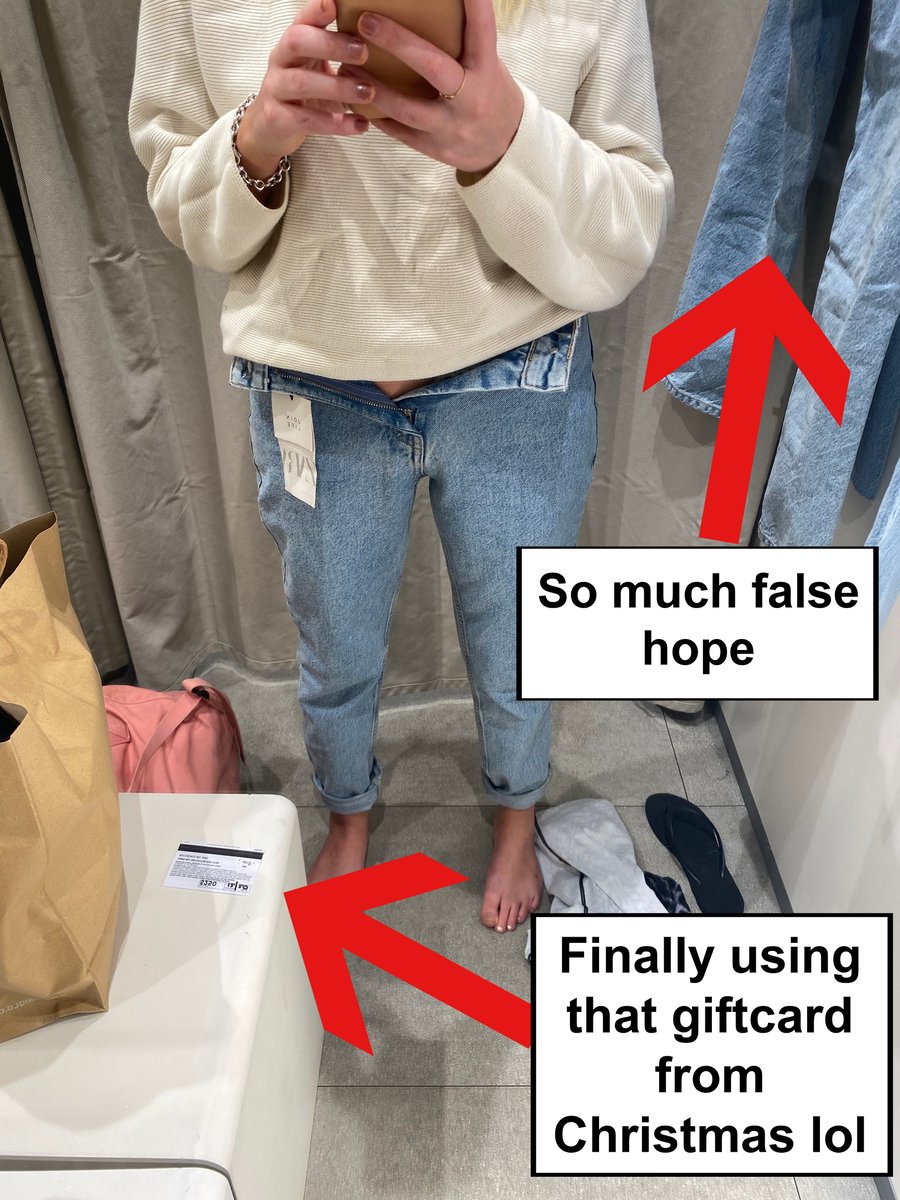 This was the point at which I said goodbye to Zara. So much potential, but sadly, nothing for this short lady.

Next I tried a pair of ABrand jeans that looked like they could be a winner. Small rips (yes, a bit of a pet peeve) but a fairly slim fit.

Not quite it. They were loose in the crotchal region (scientific term) and didn't feel particularly flattering.

At another store, I tried a second pair of slimmer fit ABrand jeans and goodness we're getting warmer.

Unsure why I felt the need to... kick in these jeans. Image: Supplied.

They definitely felt the most me but there was still some looseness in the crotchal region (designers, take note of this very specific piece of feedback), and I didn't think they did much for my (albeit not very exciting) bum.

Now for the comic relief.

We're all having a bit of a hard time. There's a lot going on. A global pandemic, state-wide lockdowns etc. So please, I invite you, to laugh at whatever the f*ck these are:

I look like my mum needs to drop me at preschool. Image: Supplied.

I demand a refund and I haven't even spent any money.

This style is allegedly a 'tapered leg' but WHO DOES THIS SUIT? I NEED TO SEE THEM.

These Grab High Rise Straight jeans from Myer were very promising from a distance. Great colour. Not too wide in the legs. Tiny rips that don't let any air through.

But alas, like so many jeans before them, they weren't it.

No. Thank you, though. Image: Supplied.

Well. I had never heard of this brand. Probably because I'm not cool.

But in a state of disillusionment, frustration and despair, I walked into Glue expecting once again to engage in a vendetta with the change room. Then I saw a very simple pair of jeans.

I feel like a laid back woman in her early 30s who's at her beach house for the weekend?!?!

Wearing jeans and sneakers because that's her 'around the house' aesthetic?!

They were on goddamn sale and I got them for $90, but obviously had my previously disclosed giftcard so they were technically free.

I've now also bought them in black because after a couple of weeks, I've discovered it's socially inappropriate to wear the exact same pair of jeans every day. 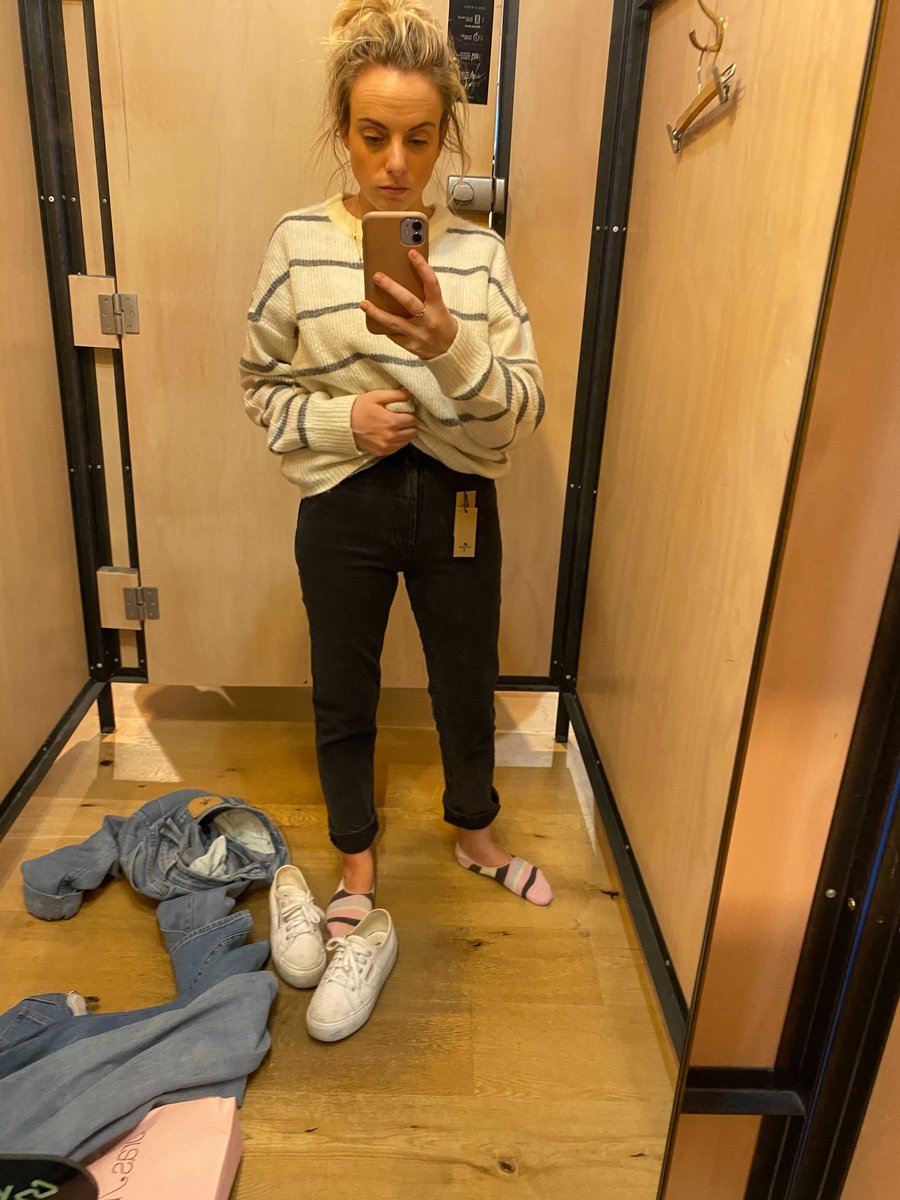 The same style in black. So creative. Image: Supplied.

Look, maybe you hate them (let's be real, it's the internet so you probably do), but they feel very me. Comfy (so comfy), simple, and completely neutral.

But my lesson was: don't steer too far away from what you feel comfortable in. I don't think I'll ever be a baggy jeans gal.

You can continue to follow my fashion journey over at my Instagram, where I've got a saved stories thingy with all the clothes I've tried so far. You can also follow me on Tik Tok.

READ: 'I've spent 30 years not knowing how to dress. Here's what I learnt when I asked for help.'

At Mamamia, we independently choose and write about products our writers genuinely recommend. We have affiliate partnerships so if you use these links to buy something, Mamamia may earn a small commission.

H
hcat a year ago

Reply
Upvote
Oh damn, I feel the same way about jeans shopping, it's second only to bra shopping for  humiliating awfulness. I have the opposite problem - I'm tall and most pants look stupid and short. I also have thighs that prevent some cuts from even making it to my waist.
It took time to come to terms with skinny jeans but I did when I realised that it didn't matter if they were too short when the cuffs fold up and they can still look good, or the shortness can be hidden by boots. Sold! Plus I found the perfect jeans in some black, skinny Levis that I have 2 pairs of on rotation for 8 months of the year. They're not too expensive, have some stretch to them, last a while before the thigh seams blow out and don't show up too much filth. They also look good with everything, dress up and down well and are sufficiently flattering. I will fight to the death with anyone who tries to take them away from me!
C
claudjor a year ago