In a 36 second clip currently going viral on Twitter, a Liberal senator has just demonstrated exactly why the women of Australia were so angry on Monday as they marched in 42 towns and cities across this country.

Our Federal Government seemingly still does not understand. And that couldn't have been more obvious than when Western Australia Liberal senator Ben Small spoke over the top of Jagajaga Labor MP Kate Thwaites as she tried to explain why the women of this country are so angry.

During an ABC panel on Tuesday, Thwaites was asked whether criticism of the Prime Minister had been too harsh after Monday's march.

Scott Morrison had angered many when he refused to turn up to the protest happening eight minutes walk from where he stood, instead choosing to tell Question Time marches like the one attended by 100,000 women and their allies were being "met with bullets" in other countries.

Women took Morrison's comment to mean they should've been grateful that they weren't shot, while walking the streets to protest for their own safety and respect.

"No," the Victorian MP answered on Tuesday.

"The Prime Minister could just not be further from what is going on in this country.

"I was out at that march, as well as a lot of other Labor figures and some government figures were as well. The power, the anger, the feeling that people’s voices aren’t being heard. That is what the PM is not acknowledging."

Her answer, however, was interrupted by Senator Small, who tried to make the point that "the same Prime Minister who opened his door and invited the same representatives into his office?" 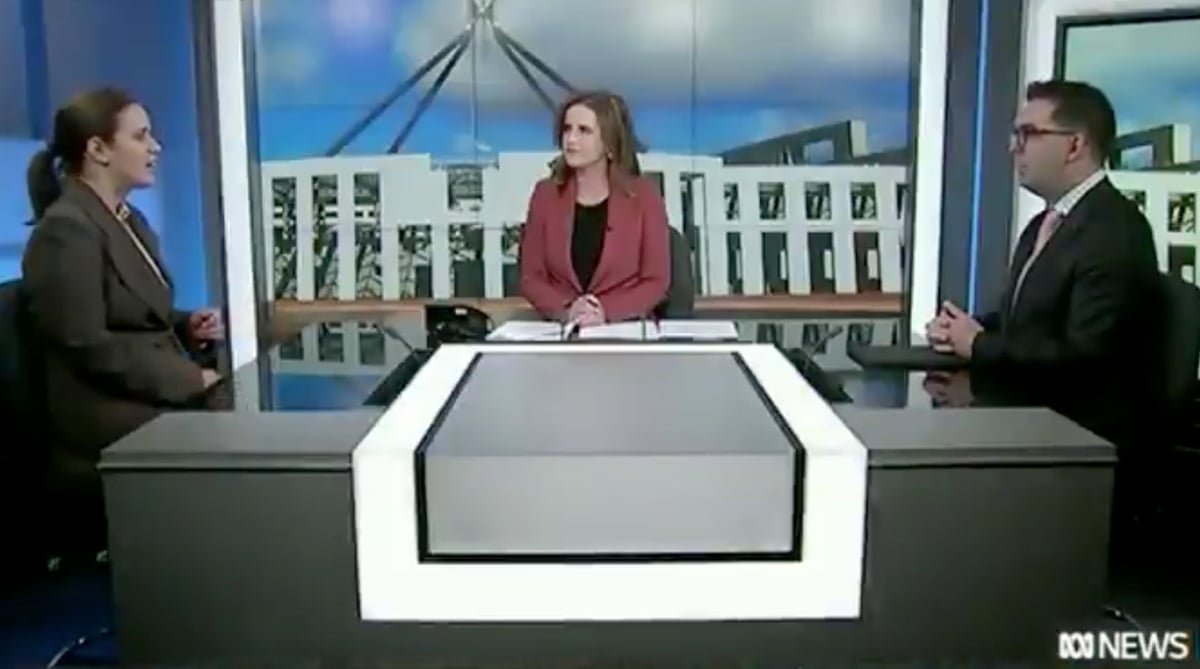 Kate Thwaites was interrupted by Ben Small while trying to answer a question directed at her. Image: ABC.

A visibly furious Thwaites tried to respond with, “Are you really going to talk over me on this issue?" as Small continued to interject.

"Ben, we’re talking about respect for women in the workplace, are you going to talk over me?" she tried again.

"I will let you keep going then," was her final resolute reply.

"I went on ABC TV to talk about why the #March4Justice was so important and Morrison Government Senator Ben Small decided to talk over me. It's so distressing just how much this Government doesn't get it," she later wrote on Twitter.

I went on ABC tv to talk about why the #March4Justice was so important and Morrison Government Senator Ben Small decided to talk over me. It's so distressing just how much this Government doesn't get it. #auspol #mansplained pic.twitter.com/MbJawrNBzw

The response to the interaction has been cutting because this was a real-time example of what women have been trying to explain: Our voices are not being heard.

We are talked over, mansplained to, and silenced again and again by the men in the room.

To those, like this Ben Small, who disrespect, talk over, demean women - your #Mansplaining days are done. If you do not listen to us, get out of our way - #EnoughIsEnough https://t.co/Wwt3UiziFr

This video is INCREDIBLY disturbing & very representative of the #Morrison government's disrespect for women. #BenSmall's behaviour is abhorrent. We did not refuse Scott Morrison's request for a face to face. He refused OURS. Wanted it "behind closed doors" - where rapes occur?!! https://t.co/eIBMJeAqzs

#EnoughIsEnough Senator Ben Small #Mansplaining & talking over the top of a women who was answering a question SHE was asked. He didn't actually have anything to say as he stuck to the daily speaking notes! #EndViolenceAgainstWomen #auspol @ThwaitesKate https://t.co/qNtsv6mhJy

I have literally never seen a more perfect example of mansplaining in my life.

In an interview about men speaking over and for women's own voices, Ben Small decided that the best thing to do would be to... *checks notes* talk over women. https://t.co/DlwzIMbZ16

After watching the Federal Government's reaction to the outpouring of anger from women across Australia in the 'March 4 Justice' rallies on Monday, I wrote an article titled They're still not listening.

Scott Morrison wasn't listening when he didn't understand why his offer to 'meet behind closed doors' was rejected by protest organisers.

Peter Dutton literally wasn't listening when Labor Leader Anthony Albanese started reciting Brittany Higgins' speech in Parliament and he stood up and asked that "he no longer be heard."

Astonishing. Scomo says women will be believed. Not only did they not walk outside the building to listen, they even gagged her words through the opposition leader.#auspol #qt pic.twitter.com/g4PmYj4Qox

Ben Small certainly wasn't listening when he refused to stop talking as Thwaites tried to answer a question directed at her - an experience that too many women are familiar with.

Women are marching the streets trying to be heard. And as Kate Thwaites reiterated, "it's distressing just how much this Government doesn't get it."

Reply
Upvote
7 upvotes
Well, my last comment was "against community guidelines", I can only assume it was the swearing, which all things considered, was fairly restrained.
I have to admire Ms Thwaites' self control here, my response would have been much... louder. And more sweary (hence the disallowed comment). It really feels like we're banging our heads against a wall sometimes, for the love of God, man, learn to read the room! Just stooooop talking for five damn minutes and listen. Actually, properly listen. I can't believe this guy, I really can't. I'm so @#£!&$)@ frustrated right now. So sick of this $#/+.
M
mamamia-user-468867314 10 months ago

Reply
Upvote
1 upvotes
@rush yes I do agree we need more women present in govt.  It is def about policies however if more women are "at the table " there can be less boys clubs and parties in theory  should have more balanced decision makers.  We need good women to enter politics, not sure its all that enticing in its current form.
G
gu3st 10 months ago

Reply
Upvote
2 upvotes
@gu3st It's funny coz it's true - I try to time my comments for certain days because some mod out there on a shift clearly does not like my sense of humour.
G
genywoman 10 months ago

Reply
Upvote
2 upvotes
Can I make a suggestion for the next federal election? Regardless of political party, vote for the woman on your ticket. We represent ~50% of the voting population. By the time some men also vote for the women we should be able to get a vastly different gender mix in parliament in one hit. They'd never see it coming.
M
mamamia-user-482898552 10 months ago

Reply
Upvote
13 upvotes
@genywoman What if you live in Pauline Hanson's electorate? Gender alone isn't enough to win my vote - their policies matter more!
A
ak87 10 months ago

Reply
Upvote
1 upvotes
@mamamia-user-482898552 exactly, Pauline is just one example, but even within the parties I vote for (I am a mid left leaner) some of the women promote toxicity, maybe not male toxicity but I shouldn’t have to swap one for the other just in hopes I have my voice heard.
G
genywoman 10 months ago

Reply
Upvote
@mamamia-user-482898552 That's one electorate. She's also in the senate, not the house of reps, and not the only female option. I'm not saying policy doesn't matter, but the male centric policies of the current government could be tempered with greater female representation in parliament. It's hard to omit women from cabinet if there are fewer men to choose from. These elections are analysed to within an inch of their lives. A significant swing towards votes for female politicians will not be ignored because politicians want to keep their jobs. It's not a perfect strategy, but I don't see the old boys club changing anytime soon while they have job security. Do you have an alternative suggestion?
M
mamamia-user-482898552 10 months ago

Reply
Upvote
4 upvotes
@genywoman I don't advocate for voting for women just because they are women. I vote for policies, not people or parties (in the upper and lower house). If I think a male politician will represent women better than a female opponent, I'll vote for him. Alternatively, I also don't vote for women's issues (or any other policy) in isolation of everything else. A politician may have a strong platform on women's rights, but hold views in opposition to my own on other matters, which can be a deal breaker.
Setting quotas and targets, and making politics more accessible/safe for women as a career would be a better step - then we'd get quality AND quantity to vote for.
News
General
Opinion
True Crime
Politics
Sport
Explainer
Entertainment
Celebrity
Reality TV
Movies
TV
Books
Rogue
Royal
Lifestyle
Beauty
Fashion
Weddings
Home
Wellness
Health
Fitness
Travel
Food
Parents
Before The Bump
Pregnancy
Baby
Kids
Teens
School
Parent Opinion
Work & Money
Money
Finance
Career
Lady Startup
Relationships
Sex
Dating
Separation
Friendship
Family
Real Life
Couples