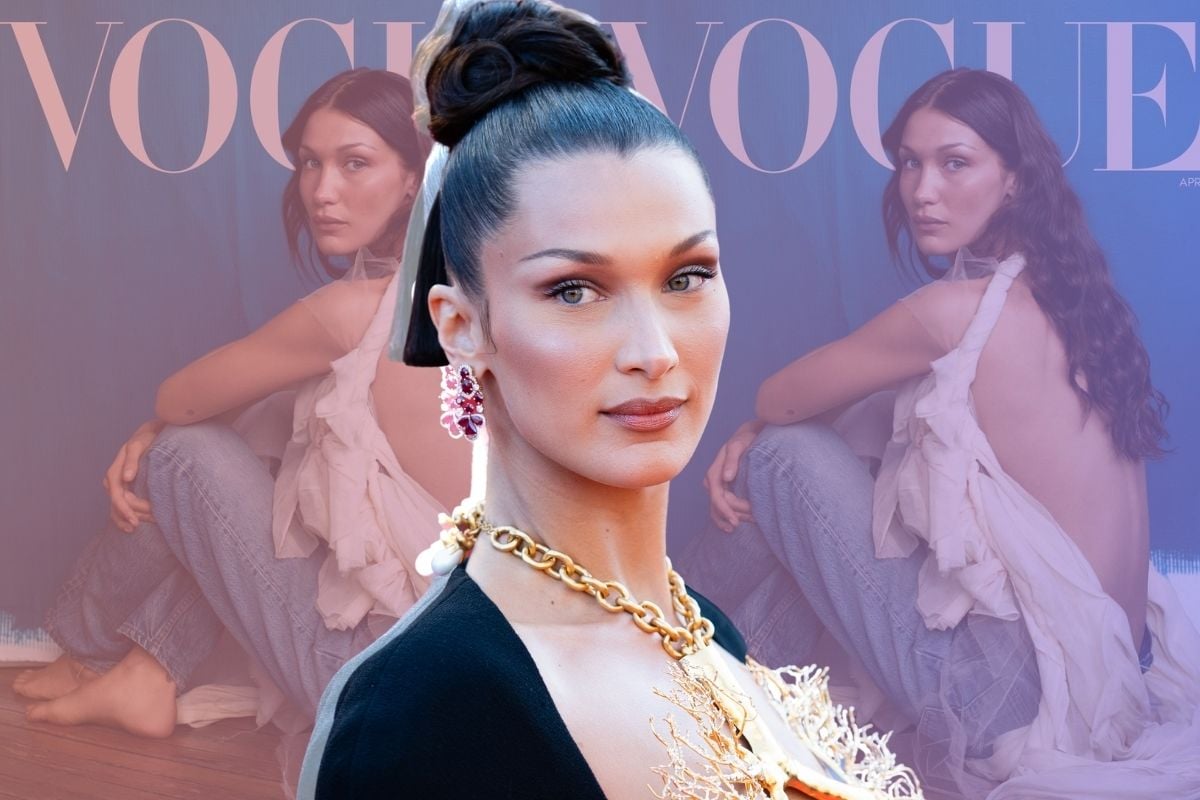 This article mentions disordered eating and may be triggering for some readers.

After years of rumours and speculation, Bella Hadid has opened up about having plastic surgery.

In an interview accompanying her cover shoot for the April issue of American Vogue, the supermodel has spoken about feeling insecure about the way she looked as a teenager, her mental health and the difficulties she faced growing up with her sister Gigi Hadid.

Here are the most interesting things we learned from her cover story.

While she might be one of the most successful and sought-after models in the world, Bella Hadid said that growing up, she felt "ugly" next to her older sister and fellow model Gigi Hadid.

"I was the uglier sister. I was the brunette. I wasn’t as cool as Gigi, not as outgoing," she told Vogue. "That’s really what people said about me."

The 25-year-old went on to say that the comments deeply impacted her esteem and sense of self-worth as she grew older.

"Unfortunately, when you get told things so many times, you do just believe it."

"I always ask myself, how did a girl with incredible insecurities, anxiety, depression, body-image issues, eating issues, who hates to be touched, who has intense social anxiety — what was I doing getting into this business? But over the years I became a good actress. I put on a very smiley face, or a very strong face. I always felt like I had something to prove."

She continued, "People can say anything about how I look, about how I talk, about how I act. But in seven years I never missed a job, cancelled a job, was late to a job. No one can ever say that I don’t work my ass off."

There's no denying that rumours and speculation of plastic surgery have been swirling around Bella Hadid for years, with many people speculating that her face and body have been altered through cosmetic surgery.

In the interview, Bella said the criticism of her looks and her underlying insecurities of 'not being enough' influenced her to go under the knife and change her face.

Bella admitted she had a nose job at 14 - and regrets it.

The half-Dutch, half-Palestinian model said, "I wish I had kept the nose of my ancestors. I think I would have grown into it."

While she confirmed her nose job, Bella quashed any other rumours she had her eyes lifted or lips filled, clarifying that none of it is true.

"People think I fully f**ked with my face because of one picture of me as a teenager looking puffy. I’m pretty sure you don’t look the same now as you did at 13, right? I have never used filler. Let’s just put an end to that," she said.

"I have no issue with it, but it’s not for me. Whoever thinks I’ve gotten my eyes lifted or whatever it’s called - it’s face tape! The oldest trick in the book."

"I’ve had this impostor syndrome where people made me feel like I didn’t deserve any of this. People always have something to say, but what I have to say is, I’ve always been misunderstood in my industry and by the people around me."

She struggles with depression and anxiety.

Late last year, Bella shared a series of pictures of herself - raw, red-eyed, in a faucet of tears. They were far from the glamourous images we have become used to.

Accompanying the post, Bella opened up about battling severe depression and anxiety when she was a teenager, writing, "This is pretty much my every day [and] every night for a few years now."

In her Vogue interview, she once again touched on her struggles with depression, anxiety, and Lyme disease.

She explained that it's something she didn't share with colleagues for years - as she had what she described as a "don’t ask don’t tell" attitude about mental health.

"For three years while I was working, I would wake up every morning hysterical, in tears, alone," she recalls. “I wouldn’t show anybody that. I would go to work, cry at lunch in my little greenroom, finish my day, go to whatever random little hotel I was in for the night, cry again, wake up in the morning, and do the same thing."

After being under a great deal of professional pressure, Bella said she spent two and a half weeks at a treatment program in Tennessee, where she said she learnt to make the demands of her career more bearable.

"To have to wake up every morning with this brain - it’s not cute," she said, giving her skull a knock-knock. "So now everything that I do in my personal life is literally to make sure that my mental state stays above water."

She developed an eating disorder in high school.

In the Vogue profile, Bella also revealed that she struggled with anorexia as a teenager.

After being prescribed medication for what a psychiatrist thought was ADHD (she was later diagnosed with Lyme disease and hypothyroidism), she experienced a decreased appetite, which pushed her into anorexia.

"I was on this calorie-counting app, which was like the devil to me," she told Vogue.

"I’d pack my little lunch with my three raspberries, my celery stick. I was just trying, I realise now, to feel in control of myself when I felt so out of control of everything else."

While she said she now has a better relationship with food, she said she still struggles with low self-esteem and symptoms of body dysmorphia.

"I can barely look in the mirror to this day because of that period in my life."

She originally planned to study photography.

Interestingly, after finishing highschool Bella originally moved to New York to study photography at college. However, she had already signed with IMG by the time classes started, so ended up following in her mother and sister's footsteps.

"On set everybody laughs at me because I’m going around asking people about the lights, or why some photographer liked to shoot on a Hasselblad, or how the art director decided on the character he wanted me to be."

"I look like I might be micromanaging, but what’s happening is I am [looking at the] production, I am creative, I’m figuring out what hair and makeup are doing, I’m helping with styling."

"I love to be a part of that process. Sometimes I think I love everything except being in front of the camera."

Reply
Upvote
2 upvotes
Why would a parent let their 14 year old child get a nose job for anything other than medical reasons? This poor girl clearly has a lot of issues - low self esteem, body dysmorphia, past anorexic behaviour, depression and anxiety. Not her fault at all, but given those issues, modelling sounds like the absolute worst career she could have chosen! It was so stressful that she needed to spend two weeks at a retreat so she could handle it... maybe that was a sign that it's not the job for her. I hope she has a good therapist.
C
cat 2 months ago

Reply
Upvote
1 upvotes
@rush why would they? Because they get teased for how their nose looks, because their beloved child cries and begs them every day, because they know their daughter wants to be a model and could be a very successful one, if they let her change her appearance. Her mother was a model, she knew what changing her nose would mean, and it has earned her millions of dollars.
L
laura__palmer 2 months ago

Reply
Upvote
@cat No, I don't think a child should be encouraged to change their appearance based on cosmetic reasons. It's disgusting that her parents allowed this, especially since she now regrets it. One should be an adult and make that decision for themselves then, not a child.
C
cat 2 months ago