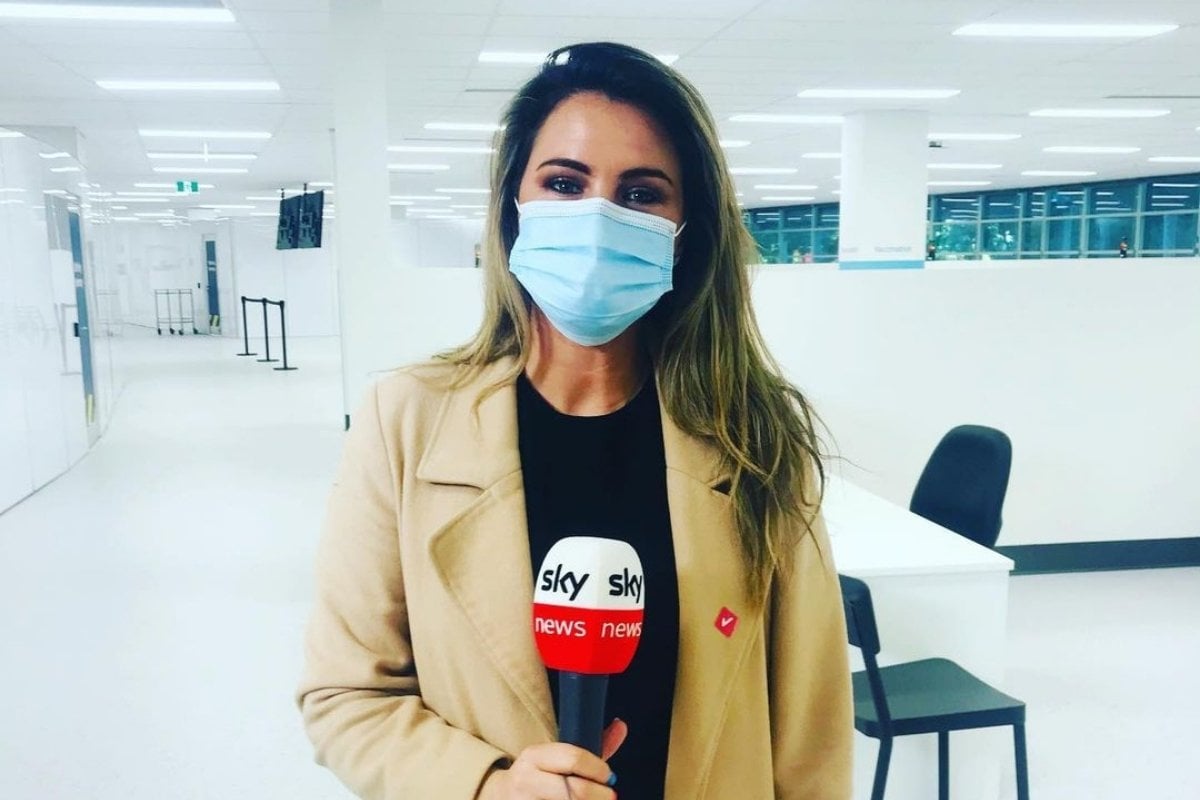 As a television news reporter, Charlotte Mortlock has spent the last 18 months at the coalface of the COVID-19 pandemic.

Then, earlier this month, she announced she had resigned. From the job and the industry she'd loved for more than a decade.

In an Instagram post explaining her decision, Mortlock expressed the toll of being among those who don't have the luxury of being able to switch off from the relentless news cycle.

She wrote about spending more days in the same room as the NSW Premier than her own mother, of knowing that each new cluster meant weeks — potentially months — without a break. She wrote about being attacked daily on social media by viewers accusing her of being too hard or too soft on authorities, and of the sheer weight of her duty as a journalist during a once-in-a-generation crisis.

"The media's role throughout the pandemic has been odd and complex as the Fourth Estate," she wrote. "It's our job to hold the Government to account. And that has never been more important when our lives are so much at their mercy. But it's also our responsibility to echo their messaging because it so drastically impacts the lives of our audience. That responsibility on its own actually weighs quite heavy."

The cost of delivering the news.

While healthcare workers, ambulance officers, police and quarantine officials well and truly held the frontline of this pandemic, reporters are among the thousands of other professionals whose roles have become more critical than ever over the last 18 months.

While the advice for most struggling with pandemic-related stress is to limit news consumption, to switch off from all but the necessary details, journalists must be across it all.

And their mental health is suffering as a result.

A 2020 study from the University of Toronto and the Reuters Institute for the Study of Journalism found that around 70 per cent of surveyed journalists reporting on COVID-19 suffered from some levels of psychological distress. The responses suggested that 26 per cent had clinically significant anxiety and 11 per cent had prominent symptoms of post-traumatic stress disorder.

As Mamamia's Gemma Bath wrote recently, "I don't get to turn off when the pandemic gets a bit much... I have to immerse myself in people's grief, fear and anger. I have done endless interviews with Australians (both here, and stuck abroad) who just want you to hear their COVID-19 story."

It's a privilege, absolutely. But it takes its toll.

Speaking to Mamamia's news podcast, The Quicky, Charlotte Mortlock recalled having to do between five to 15 broadcasts per day and the impact of the adrenaline that came with it.

"I needed to be across the detail of what was happening right across the country. So my news alerts would just go off all through the night. And then I'd wake up and just have to get my head around everything," she said. "I would sleepwalk to live crosses, I would dream about live crosses, I would dream about new details. I was never away from my phone."

When she did force herself to take a break, the anxiety of missing something lingered.

Then there was the Twitter trolling — a product of reporters becoming more visible and recognisable than ever. 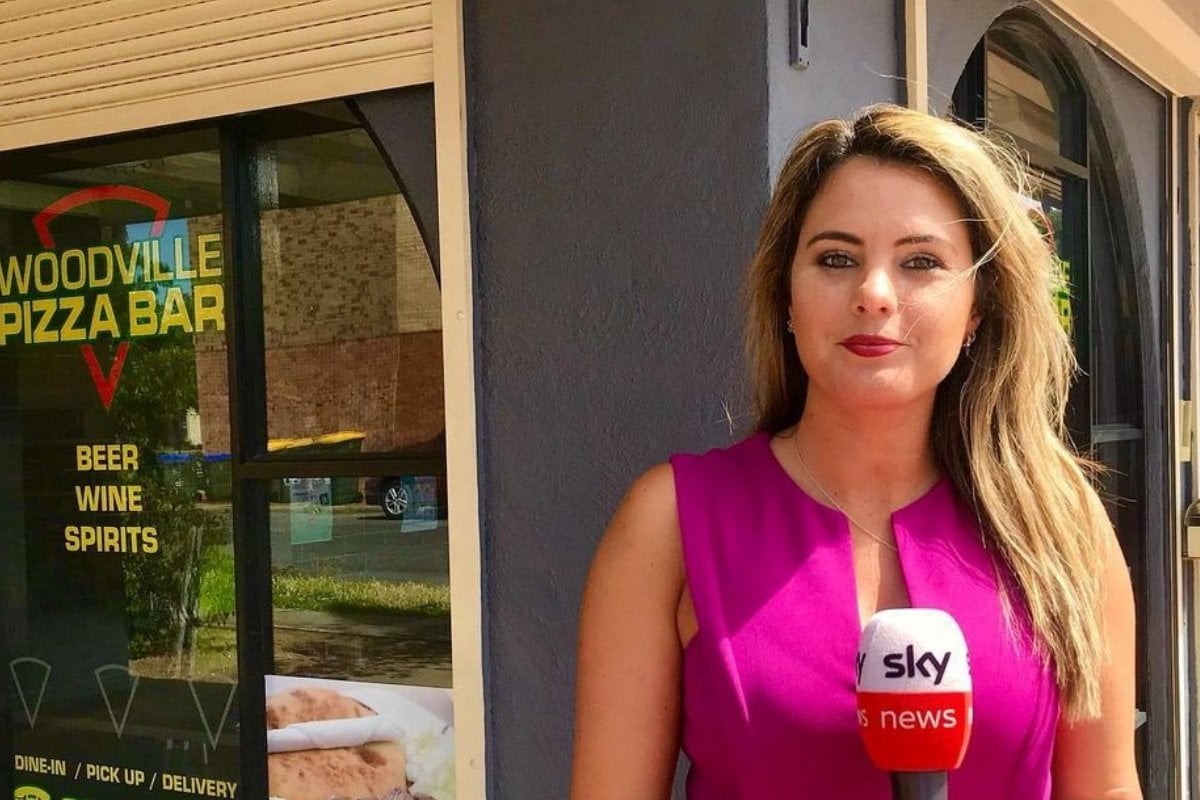 Charlotte was flown from Sydney to cover outbreaks in South Australia. Image: Supplied.

"It has been awful the past two years, the amount of trolling. I don't really know a journalist that hasn't been trolled on [Twitter]. People are unkind," she said.

"The journalists are trying, they're doing their job, and to have armchair experts trying to tell them that they should be asking this or that, not knowing what we might know behind the scenes or what we deemed to be a more important line of questioning, was just really frustrating and I guess a bit disheartening. Everyone is working so hard, and everyone is so exhausted."

The volume of conspiracy theories circulating also got to her, as did the recent anti-lockdown protests in Sydney, Melbourne and Brisbane.

"I know how inundated people have been with this information. And I honestly made it my mission to try to wade through the crap to get the truth to people. But then something like the protests happens, and it breaks my heart," she wrote on Instagram. "Because I do take it personally on some level, as if I and the media haven't done a good enough job [of convincing] people that we are more worthy of their trust than the alternatives they're finding."

The challenge is a unique one.

Those elements weren't a part of other crises she had covered, like fires or floods. This time, the duration and intensity of it is linked, at least in part, to her profession's ability to clearly and accurately impart the necessary information about the risks, and to scrutinise and inform the public about proposed solutions.

"If you can mobilise enough people to do the right thing, to stay at home and follow those rules and to get vaccinated, there is something we can do to stop it. And so I think that really is why I was so invested in it," Mortlock said. "I took it so seriously, trying to really convince people that I was a trustworthy person and that they should listen to me. And I guess the government is obviously doing that as well. But just that responsibility weighs really heavily on a lot of journalists that have been covering [COVID-19] for the past two years."

For more of Charlotte's story, listen to The Quicky below or via your favourite podcast app.