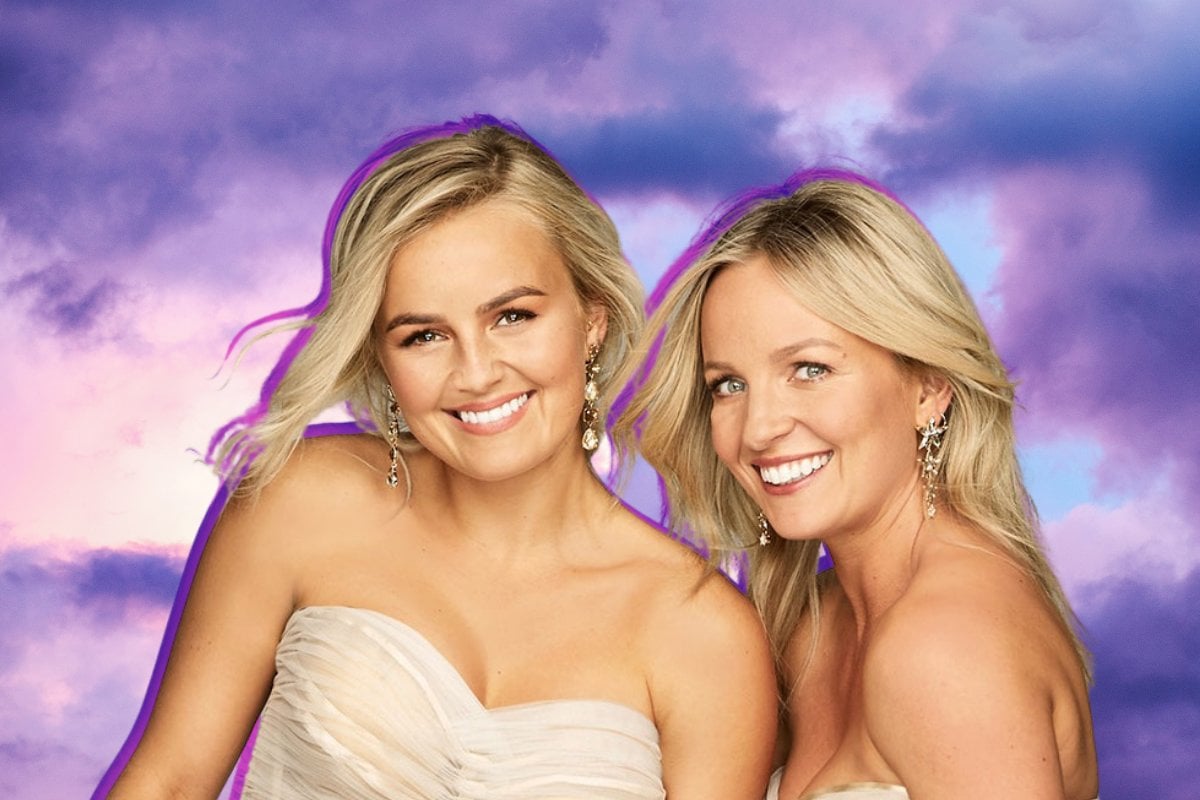 There's been an insidious undertone during this season of The Bachelorette.

This year, Channel Ten has blessed us with two Bachelorettes - Elly and Becky Miles.

The down-to-earth sisters from country NSW love a bit of adventure and aren't afraid to get their hands dirty. They love a laugh and will fiercely protect each other if someone crosses them.

They're the first to admit they're not your typical Bachelorettes, calling themselves a "couple of ferals from the bush" during the first episode.

Watch the trailer for this season of The Bachelorette. Post continues after video.

But, when you think about it, they're exactly what every man on Tinder and in their dating reality TV show applications claim to want - natural, down-to-earth women who love adventure and travel, who don't seem to be - God forbid - "high maintenance".

It's easy to see why Channel Ten chose them.

That's why it's been disappointing to hear the rumours that some of the men weren't into the sisters and even demanded "hotter chicks".

The rumours stem from an incident in the mansion. During one of the cocktail parties last week, the other men told Becky that Pascal Wallace remarked "could they find hotter chicks" after he'd first met the sisters on the red carpet.

The sisters confronted Pascal, with Becky saying: "We've heard that you've been basically questioning Elly and myself, saying things like, 'Oh, you know what? They could have picked, like, better looking chicks'."

Becky and Elly asked Pascal to leave, and he swiftly exited the mansion.

After his exit, Pascal denied ever saying those words.

"Never would I say, they "should have found hotter chicks". I find Elly super attractive. I was always in Elly's camp," he told the Kyle and Jackie O show.

It could have stopped there.

Then this week it was reported by the So Dramatic! podcast that the men were actively avoiding spending time with the sisters.

“The aim of the game is to spend as much time as you can with the Bachelorettes,” host Megan Pustetto said during Tuesday's episode. “However, this season the boys were trying to do the exact opposite."

Pustetto explained that according to her sources the guys thought Becky was Elly's mum when they first saw them and they didn't believe they were worthy of the "prestigious title of Bachelorette".

“The boys just weren’t into them so much so they were actually trying to avoid spending one-on-one time with them," she said.

“One boy dished that they were trying to stay on the show, but they avoided getting one-on-one dates so they didn’t have to kiss them.

“The guys were constantly complaining, saying, ‘Why did we get stuck with these chicks?’

Pustetto said the men openly discussed this in the mansion and said if they got a date card, they would nominate another guy as "tribute" to go on the date.

What followed were countless headlines by media organisations across the country about how the men were actively avoiding the Miles sisters.

Some people even commented on the stories agreeing with the men, and claiming the sisters weren't attractive enough to be looking for love on TV.

Very few people said that maybe these guys should just leave the show - and give up their potential stint on Paradise and/or their future as an Instagram influencer - if they don't deem the women attractive enough to date.

Not enough people questioned the integrity of the blokes.

But then, Aggi Guardiani quashed those rumours altogether. Speaking to Mamamia on Thursday, Aggi said the idea the men were avoiding Elly and Becky, or thought they weren't attractive enough, came from "not a credible source I would dare say".

"If anything, it was like 'Oh I can't wait to get a single date, I need more time' so I don't know where the others decided that story came from but it's definitely untrue," he said.

Aggi said Elly and Becky were lovely and all the men enjoyed their company during their time on the show.

"The word comes up 'wholesome', they were beautiful. They are beautiful. And they're just high spirits all the time, we all had a laugh.

"We all had a really good time, and I don't think anyone - unless they left and had a comment to say - felt differently."

Never thought I was much of a sequin glitter gal until this dress came into my life, and now I’ve turned! Well and truely my fav glam to date ✨ and Elly bell you are hot to trot 🔥 hope the boys like what they see 😜 @bacheloretteau @channel10au #bacheloretteau The dream team did it again ❤️ thanks to @helendowsley @margaretaston @kim_styledbycapitalk @lauren.boutros

We don't know what was said behind closed doors. They were probably a few men who just didn't click with the sisters or felt like they weren't their type.

There might have even been a few douchebags who claimed they weren't "hot enough".

One thing we do know is the damage has already been done. The rumours have created a false narrative around the sisters and have created an environment where it's become perfectly acceptable to comment on their appearance and their "hotness".

If Becky and Elly Miles are not "hot enough" to be the Bachelorettes what are we saying to all the women who aren't thin, white, blonde and by all measures, CONVENTIONALLY ATTRACTIVE?  And what a way to treat two women who have been brave enough to put it all on the line on national TV.

Imagine how much more enjoyable this season of The Bachelorette would have been if the contestants had kept their mouths shut and not constantly fed the gossip mill.

LISTEN: The truth behind The Bachelorette headlines.

Reply
Upvote
A toxic atmosphere on a show where the whole premise is toxic. How surprising.
R
rush 2 years ago

Reply
Upvote
1 upvotes
Isn't that the common current response when rejected by a woman, though? "Whatever, you're a fat ugly slut anyway, I didn't even want to go out with you in the first place, I was only asking you out for a joke". It was probably just a matter of time before it became the response from the gossip mags and blogs. They needed someone to blame for a less-than-interesting series - 'eh, this ones not doing as well, let's blame it on the not-hot girls'. Rather than, say, the lack of interesting guys, or the fact that the romance reality shows are reaching saturation point.
News
General
Opinion
True Crime
Politics
Sport
Explainer
Entertainment
Celebrity
Reality TV
Movies
TV
Books
Rogue
Royal
Lifestyle
Beauty
Fashion
Weddings
Home
Wellness
Health
Fitness
Travel
Food
Parents
Before The Bump
Pregnancy
Baby
Kids
Teens
School
Parent Opinion
Work & Money
Money
Finance
Career
Lady Startup
Relationships
Sex
Dating
Separation
Friendship
Family
Real Life
Couples