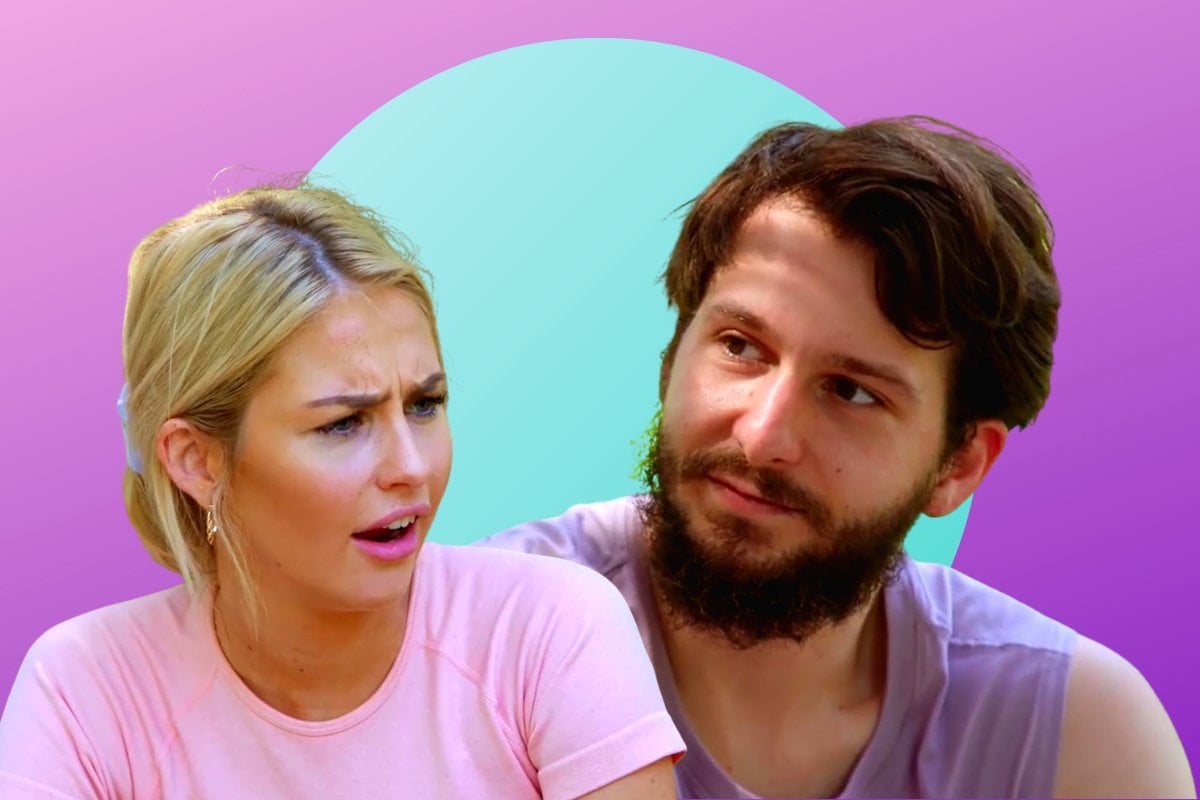 Mitchell is trying to watch the critically acclaimed miniseries The Queen's Gambit, but it's damn hard to concentrate with Lachlan and his partner Thermomix making so much goddamn noise.

No one else is getting much TV time either, because there are kisses to discuss.

Kiran asks Bryanna if she... enjoyed... their kiss and she says she did! Heck yeah dude!

Slight tangent, but does Kiran have the best smile on Australian TV right now??? 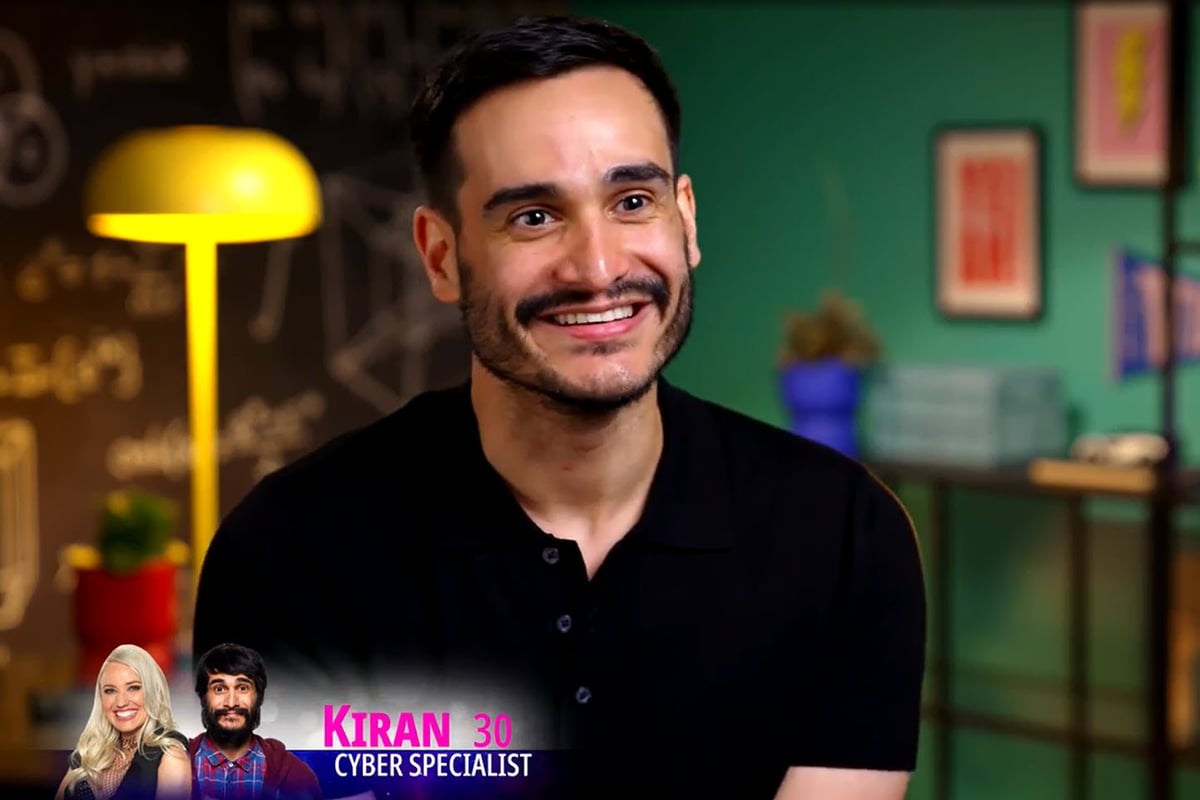 WHO ELSE SMILES THIS GOOD???

Anyway, they're super cute and giggly and yep, there's another pash. We simply have no choice but to stan.

Superman James and Jess have also got to kissing a lot too, which leaves poor George feeling... a little left out.

He tried to kiss Josie yesterday but she thought they were just going in for a hug and oh god, it was so awkward it hurts me a little to remember it.

He's lost his confidence but there's no time to dwell on it because there's some lycra nearby calling his name. 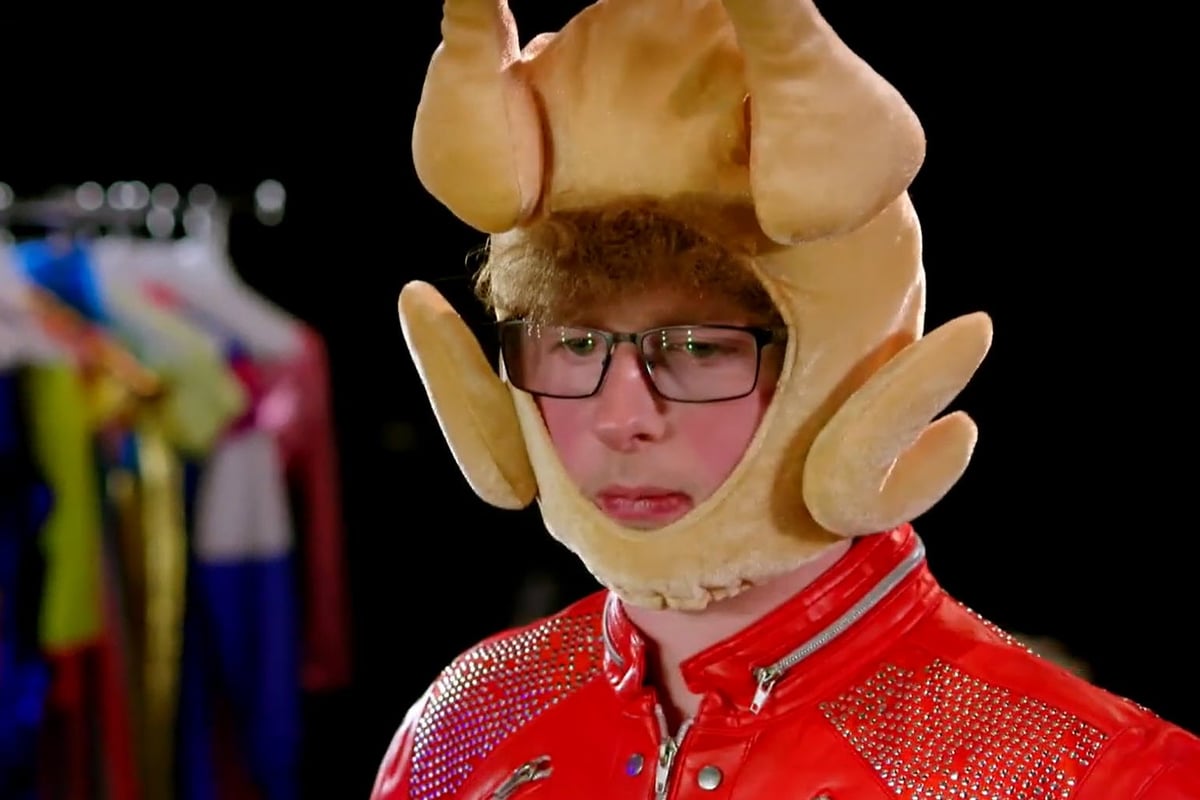 I can't explain this but it just felt important to... point out. Image: Nine.

A moment for silence for our dear friend Dr Frank, who would have loved to see this.

They chuck on various levels of bright, colourful spandex or take off nearly... all their clothes. 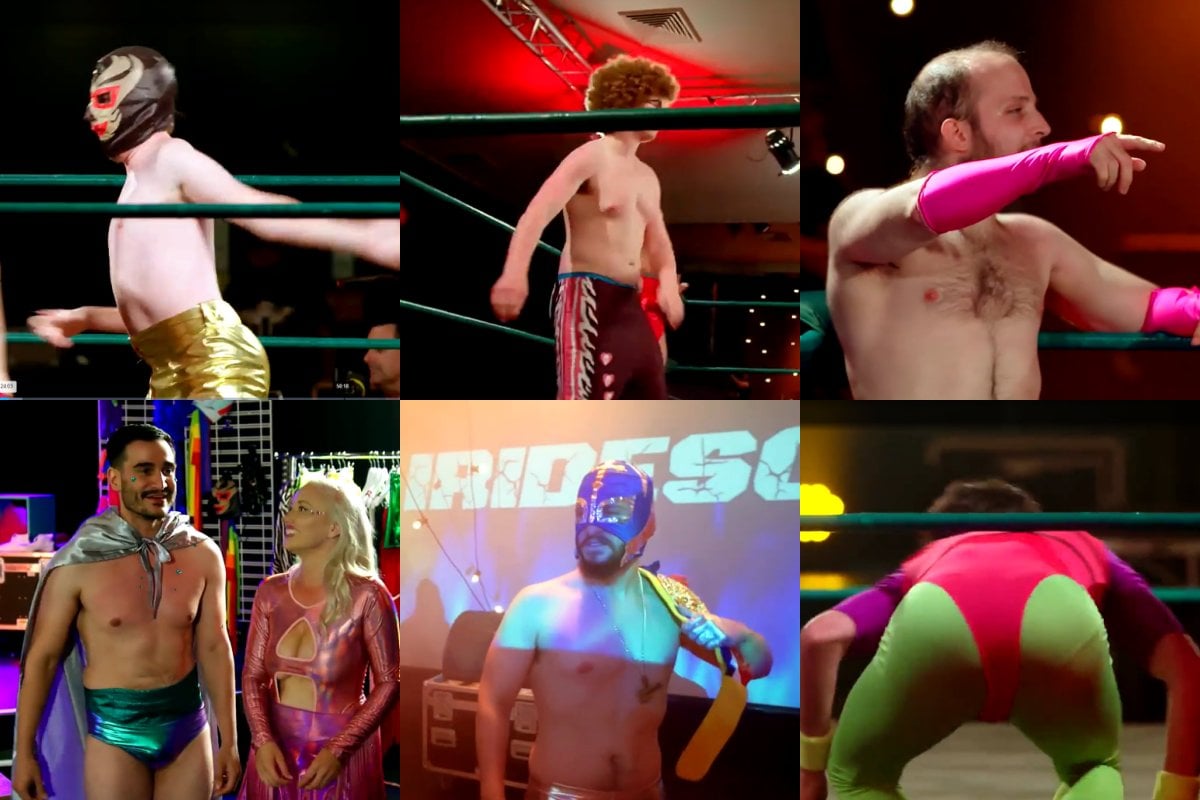 Lachie and his g-string get thrown about like a piece of paper. George brings his martial arts skills to the ring. Mitchell goes way too method as a demon whose voice is going to haunt me in the middle of the night.

Ashleigh and Mitchell are winners along with George and Josie, which means surely we're about to see his kiss-related redemption!

Sweet Mitch is preparing for his date by laying out all his ugly t-shirts and pondering his feelings for Ashleigh.

She's an absolute gem who has accepted him with his all quirks, helped him come out of his shell and encouraged him every step of the way, so he wants to profess his feelings to her.

Oh no, how in the hell is this wholesome show going to portray his rejection?

I CANNOT HANDLE SEEING MITCHELL HAVE HIS HEART BROKEN.

Their date takes place at Bondi alongside a number of... giant games. They play literally one 30 second game of giant Connect 4 before sitting down for a picnic. Fair enough, but I would've at least given the Jenga a go.

Mitch tells Ash he wants to continue having experiences like seeing the great blue expanse and eating with her, and that, he thinks he loves her.

Ashleigh is so, so nice. She says she's loving spending time with him and their experiences but that, it's been two short weeks and she cannot say she's on the same page. 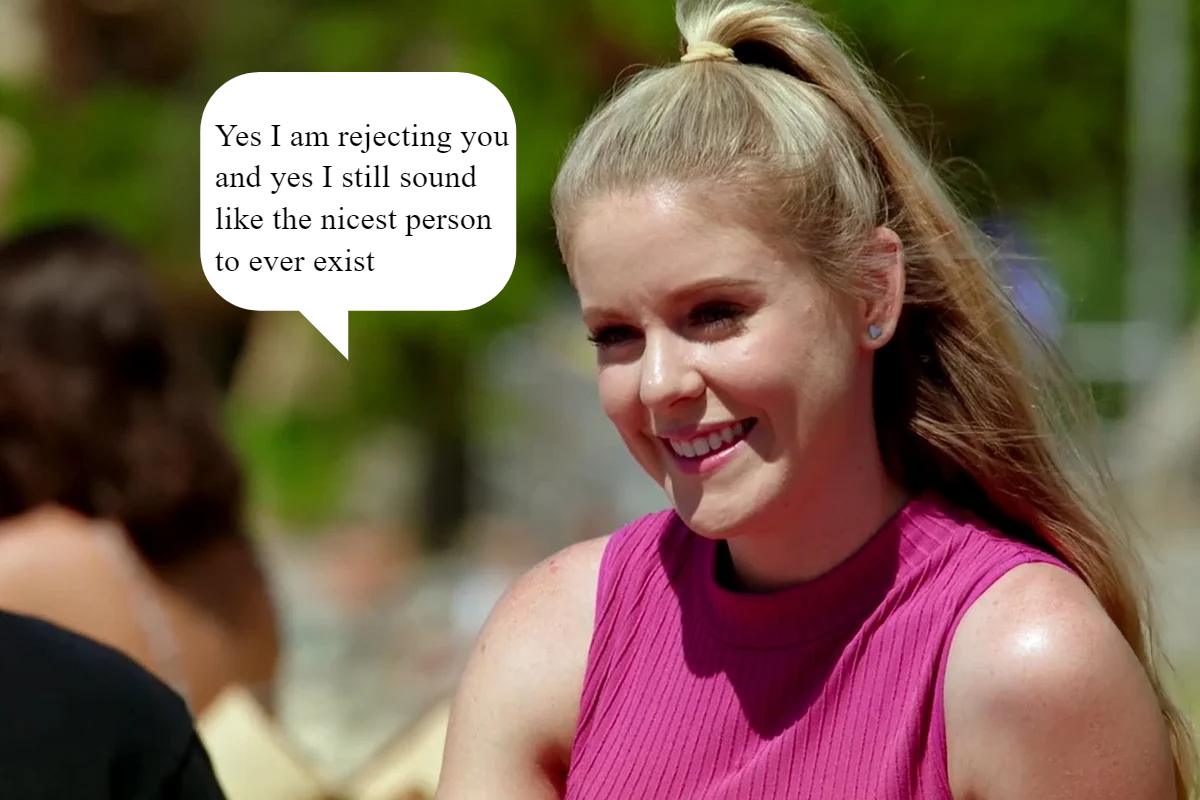 "I could tell you I hate you and you'd want to give me a hug." Image: Nine.

Mitch says he understands and look, it's just a deep, platonic love and her wanting to be best friends is amazing to him.

Ashleigh tells the camera she thinks Mitch's feelings come from opening himself up to so many new things and she is so proud of him for stepping out of his comfort zone.

I'M NOT CRYING, YOU'RE CRYING.

Most other reality shows would've dramatised that and made it his huge, embarrassing deal and THIS SHOW DIDN'T I'M SO PLEASED WE ARE PROGRESSING AS HUMANKIND.

Katniss and Peta Josie and George are doing archery in the forest but come on pls we want to see them talk about their awkward non-kiss from the other day.

Oooooh Josie says she doesn't want the other day to make George think she doesn't like him, and she straight up tells him she wants to kiss him.

So he just like... looks around and talks about the weather.

GEORGE. WHAT ARE YOU DOING.

He's got the signs all wrong and says he doesn't have any expectation that it will happen soon. 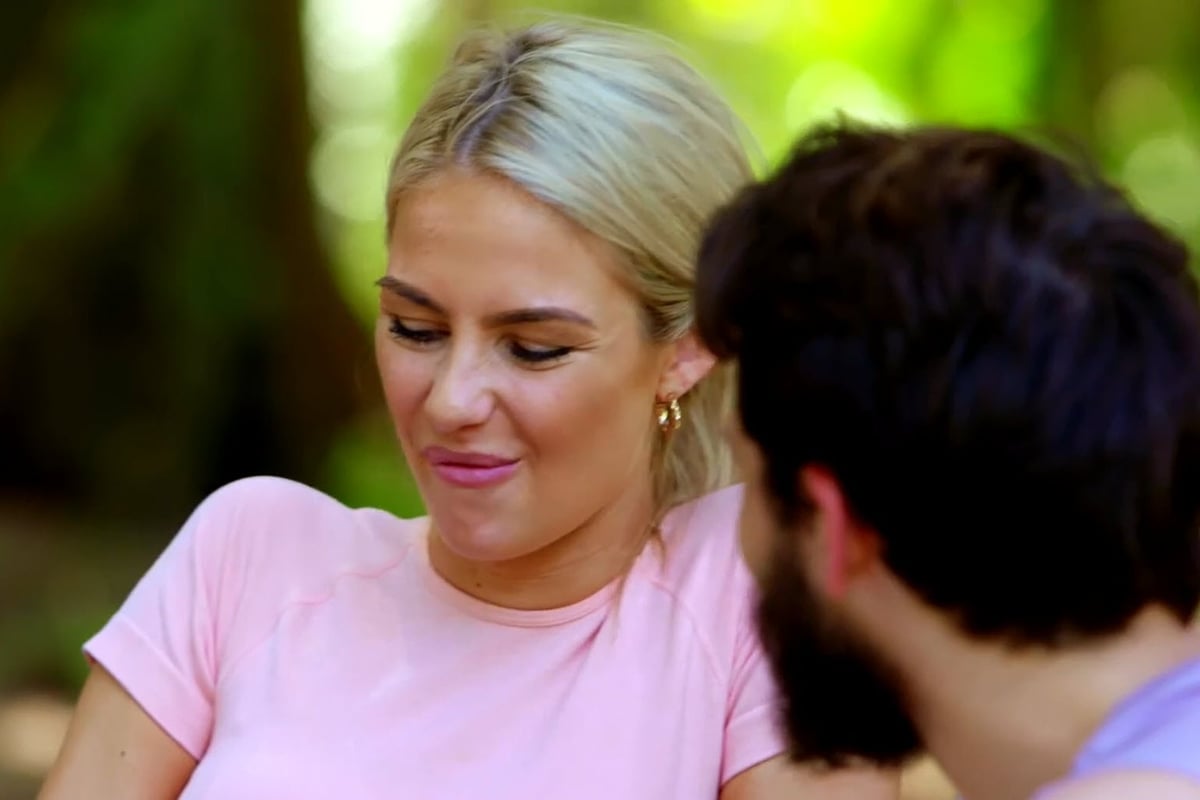 THE CRINGE. IT JUST HURTS SO MUCH. Image: Nine.

I feel like at this point she needs to take charge. Otherwise they'll be 80 years old by the time it happens.

At HQ, Mitchell tells that lads about how he told Ashleigh he loved her AND THEY ARE ALL SO PROUD OF HIM. 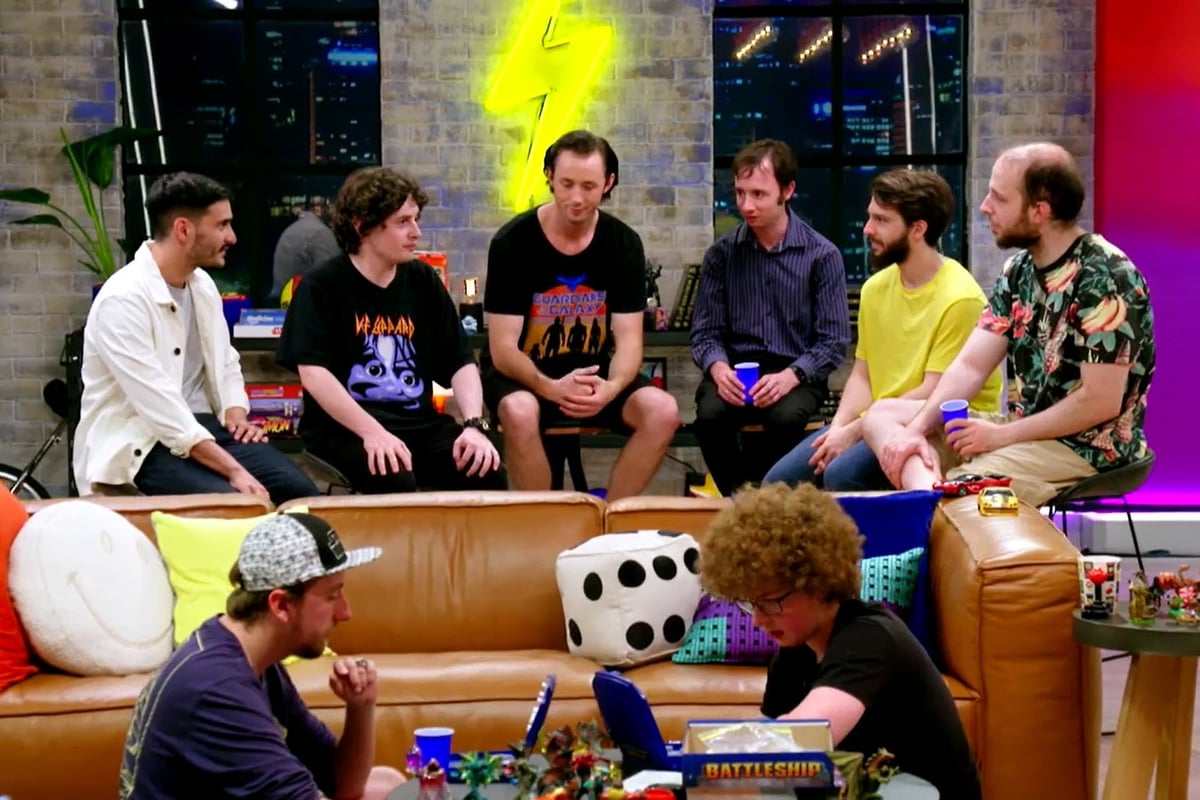 The bottom two are announced: Alex and Eliza and Kiran and Bryanna.

Hoy boy, it's time for my favourite part: A wholly unnecessary elimination challenge.

This time, there is a slinky tied to their... waist and they have to... shimmy a disc? And throw it into a box? WHO COMES UP WITH THESE AND CAN I PLEASE SPEAK TO THEM?

The teams spend 12 hours swirling their hips and it's incredibly uncomfortable for all of us. 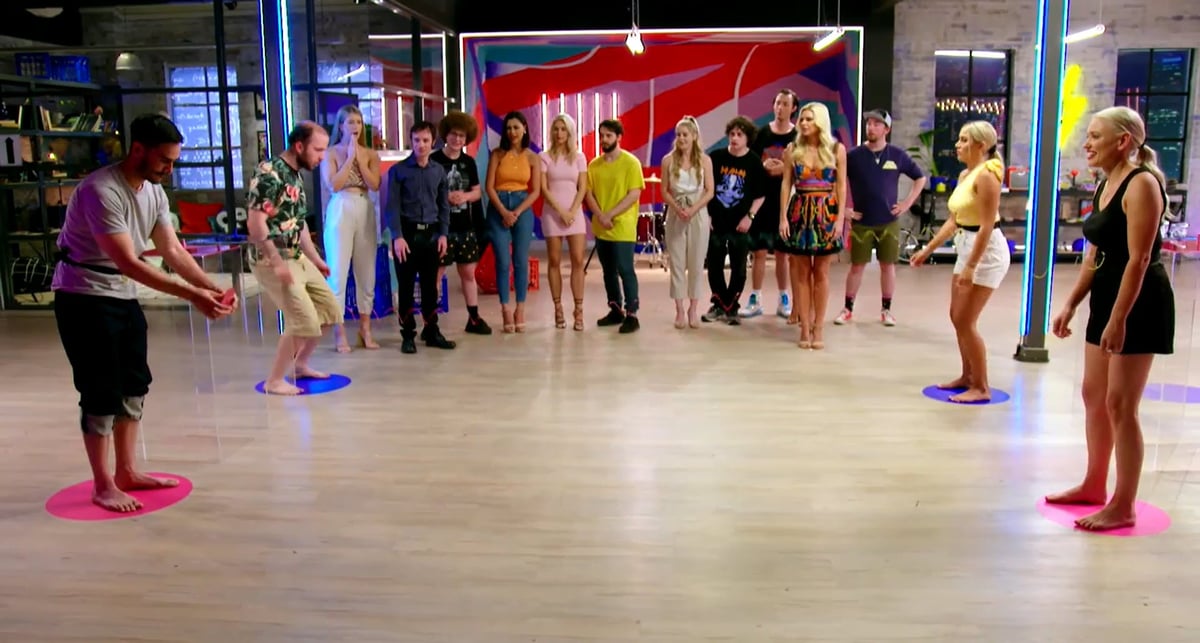 Can I speak to this challenge's manager. Image: Nine.

Alex and Eliza opt for small hip movements, and it's a winning strategy. They beat Kiran and Bryanna's... large hip circles, sending home the show's most solid relationship so far.

I'm so glad Kiran got a makeover and Bryanna chased him through a hallway for a kiss.

WE WILL MISS YOU AND YOUR SMILES.