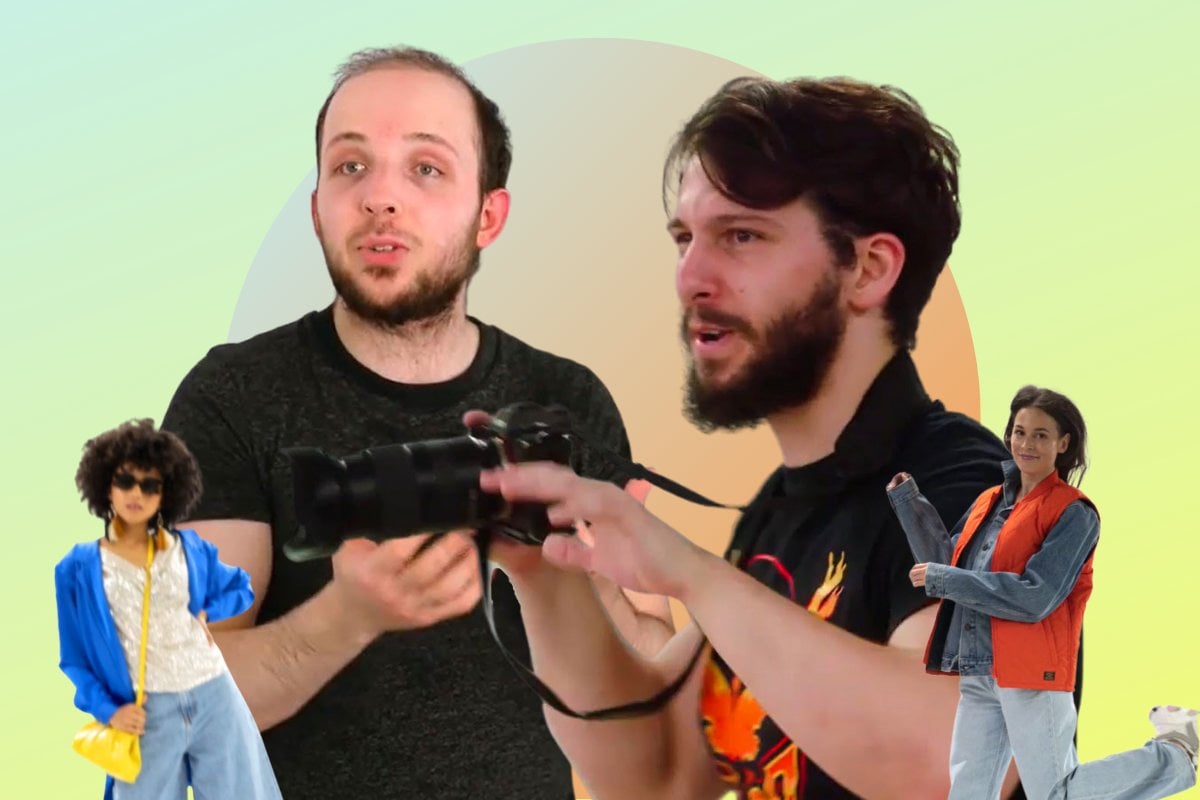 Good evening to you all but especially Mitchell.

We open with Sophie introducing us to the Beauty and the Geek headquarters, and she tells them their next challenge is for the geeks to act as stylists and photographers for a professional photoshoot.

Dr Frank says it's a little like getting kids to perform open heart surgery and... issss ittt? Is it really?

It's also entirely unclear why this needed to happen at 6am.

The models will have no idea the geeks are undercover and the one who is the least... bad will win a date with their beauty.

Eliza is confident that Alex can pull it off, because if he put a beret on he'd look like a fashion person. 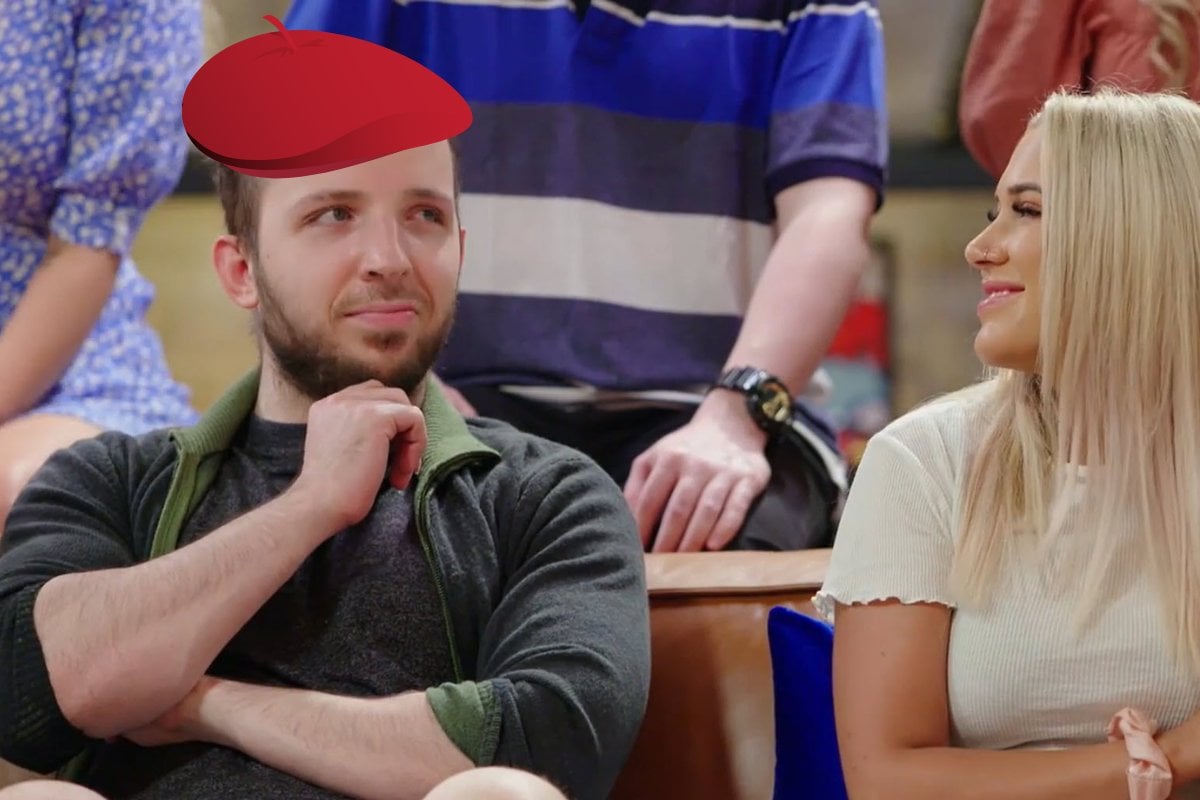 The beauties are given 20 minutes to word vomit all the fashion knowledge they have to help their geek, and again, I'd just like to ask... WHY DID THIS NEED TO HAPPEN AT 6AM?

These are things I learned:

Alex, bless him, is telling us about how he gets sweaty when he's nervous and then gets more nervous about how he is sweating and therefore MORE sweaty and MORE nervous until he's basically just a shaking puddle on the ground.

Jess tells Kyle to fake it till he makes it, so he adopts a French alter ego named Hans.

The name makes no sense geographically, but it's not as embarrassing as JESSICA CONVINCING JACKSON TO USE A BRITISH ACCENT FOR THE CHALLENGE WHEN JACKSON IS ALREADY BRITISH.

Angel Mitchell is showing Ashleigh how he intends to get his model to pose and she is such human sunshine that even when she's trying to say... "no that is a terrible idea", it sounds nice.

Alex didn't find a beret, but he's up first and he makes his model hold an apple, two giant googly eyes, a wind blower, a kitchen sink, etc. etc. etc. 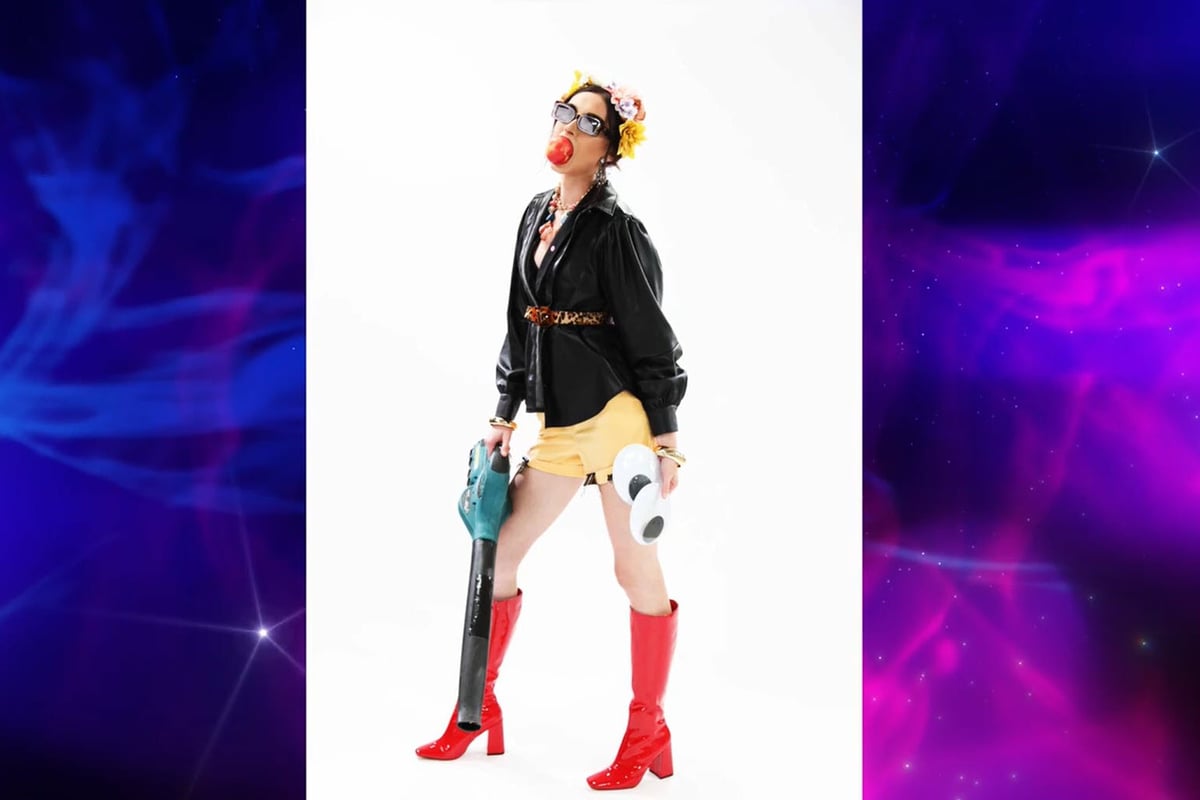 It actually looks good in a 'fashion is so weird' kind of way, but he's getting sweaty and nervous and MORE sweaty and MORE nervous. He says "I am absolutely suffering in this heat" and it's the most dramatic high fashion photographer thing I've ever heard.

Meanwhile, Mitchell is "metaphorically defecating" himself and MITCH I AM PRETTY SURE YOU ARE ALLOWED TO SAY "SH*T".

He makes his model change into the ugliest outfit I've ever seen and takes the worst photos to ever grace the earth, but Mitch is happy with himself AND THAT IS ALL THAT MATTERS. 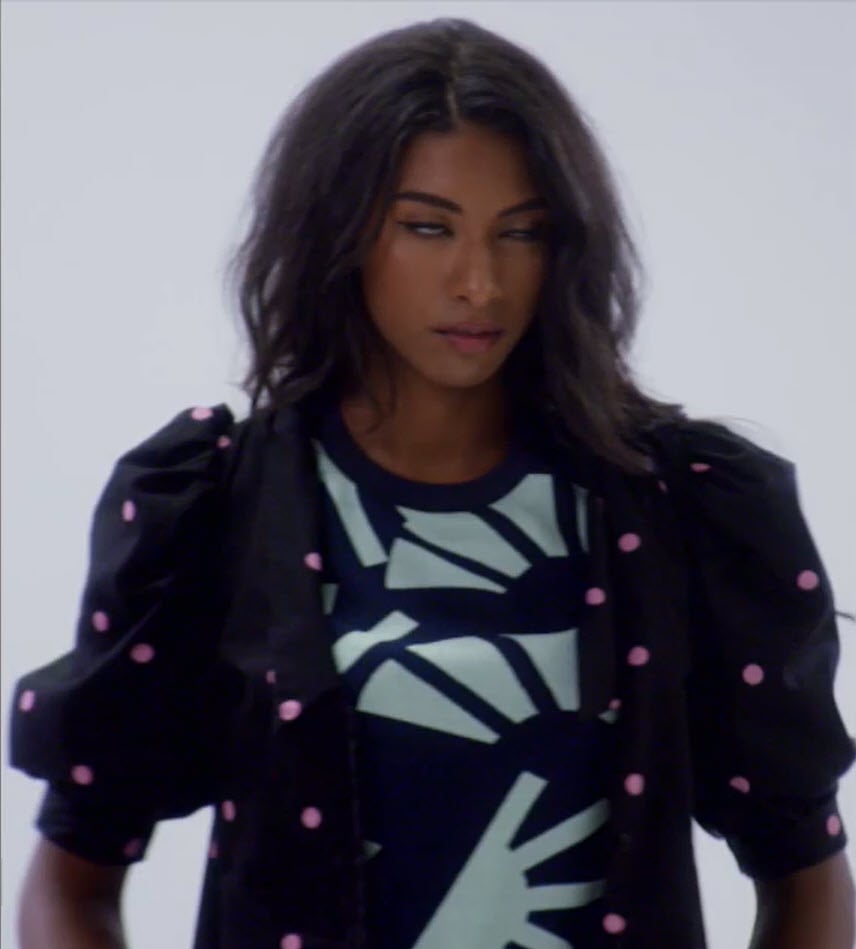 I am so sorry to this model. Image: Nine.

Kyle/Hans greets his model in a questionable French accent, and Jackson is suddenly 10 times more British than he already was. 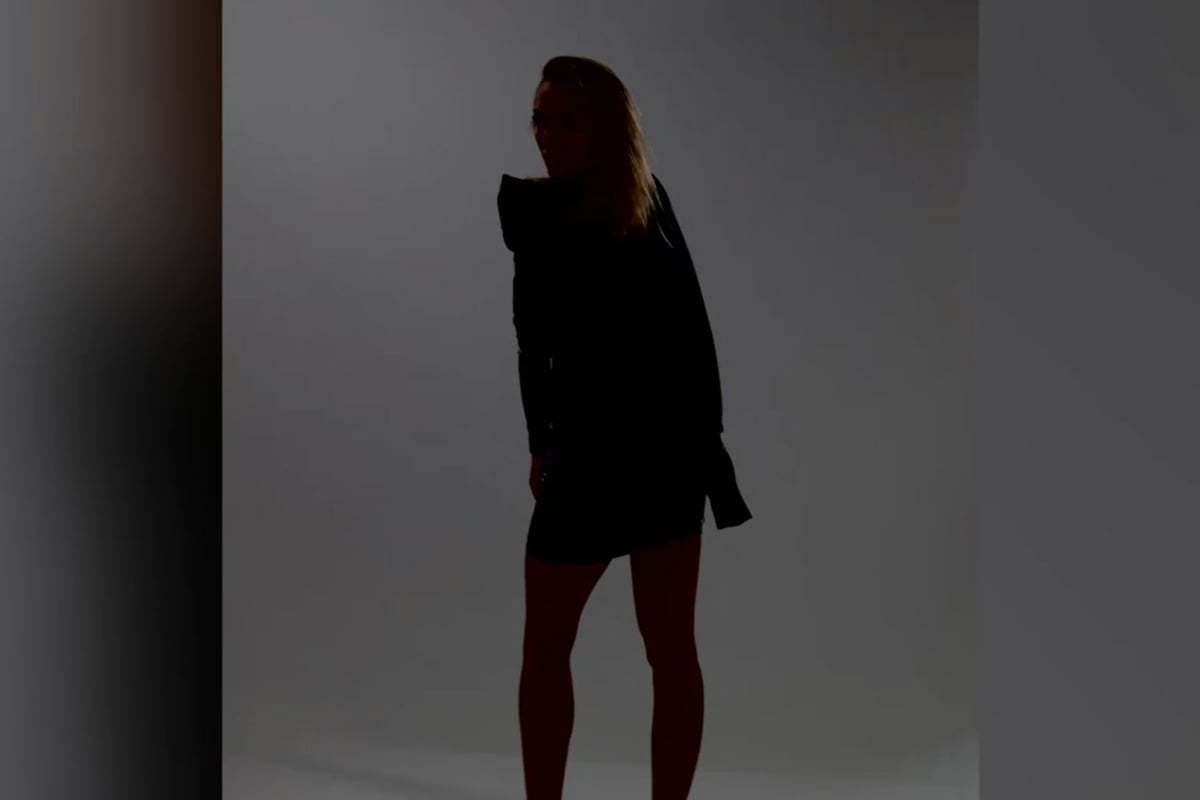 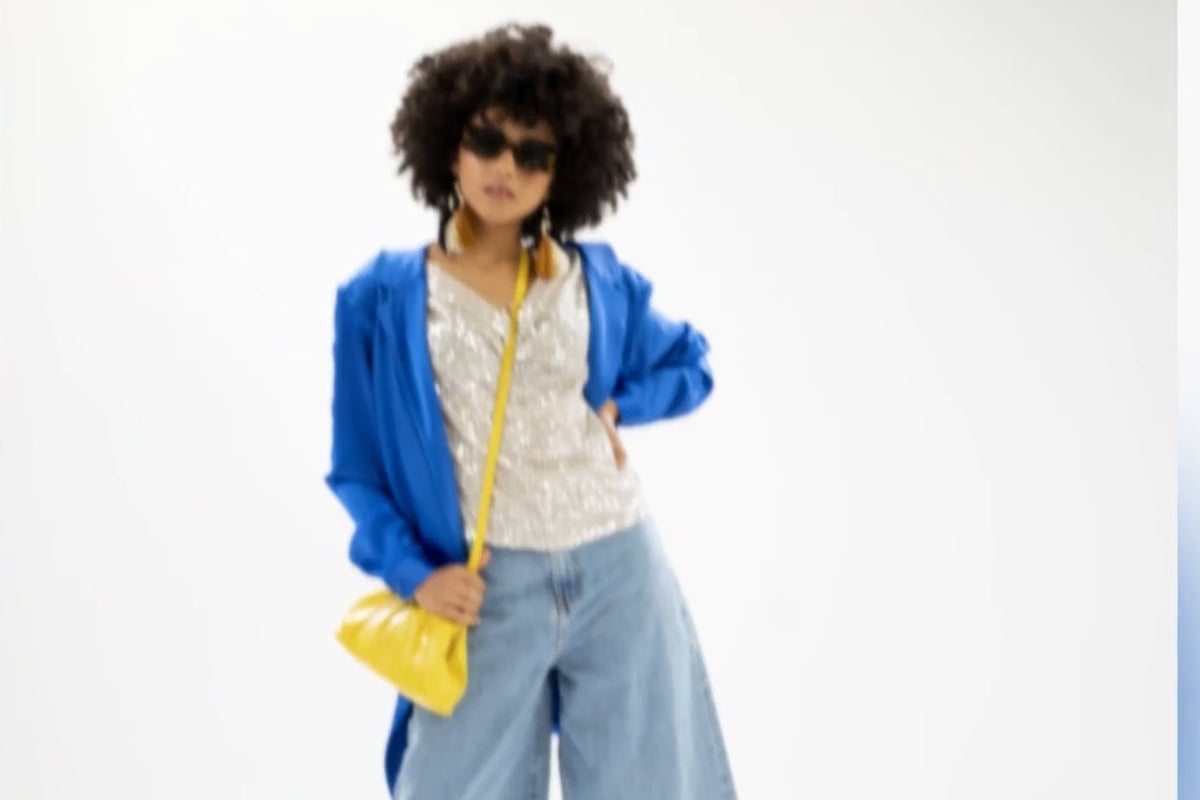 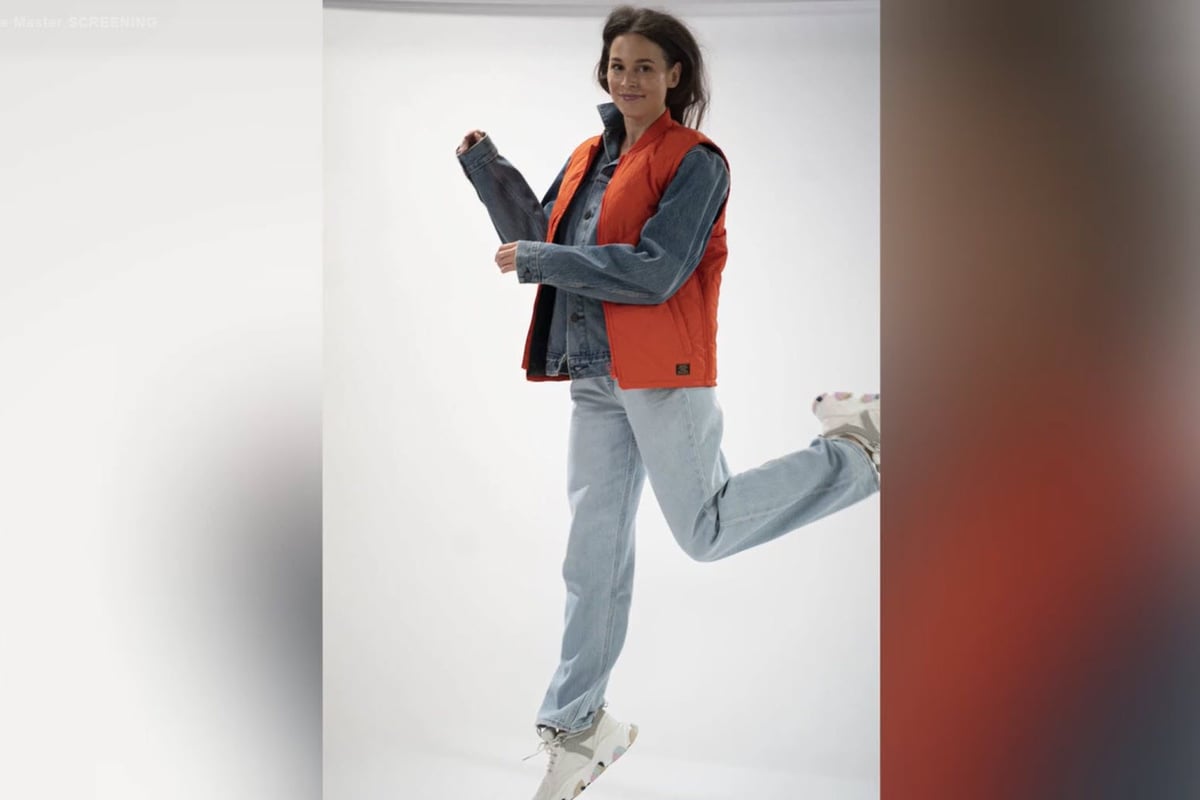 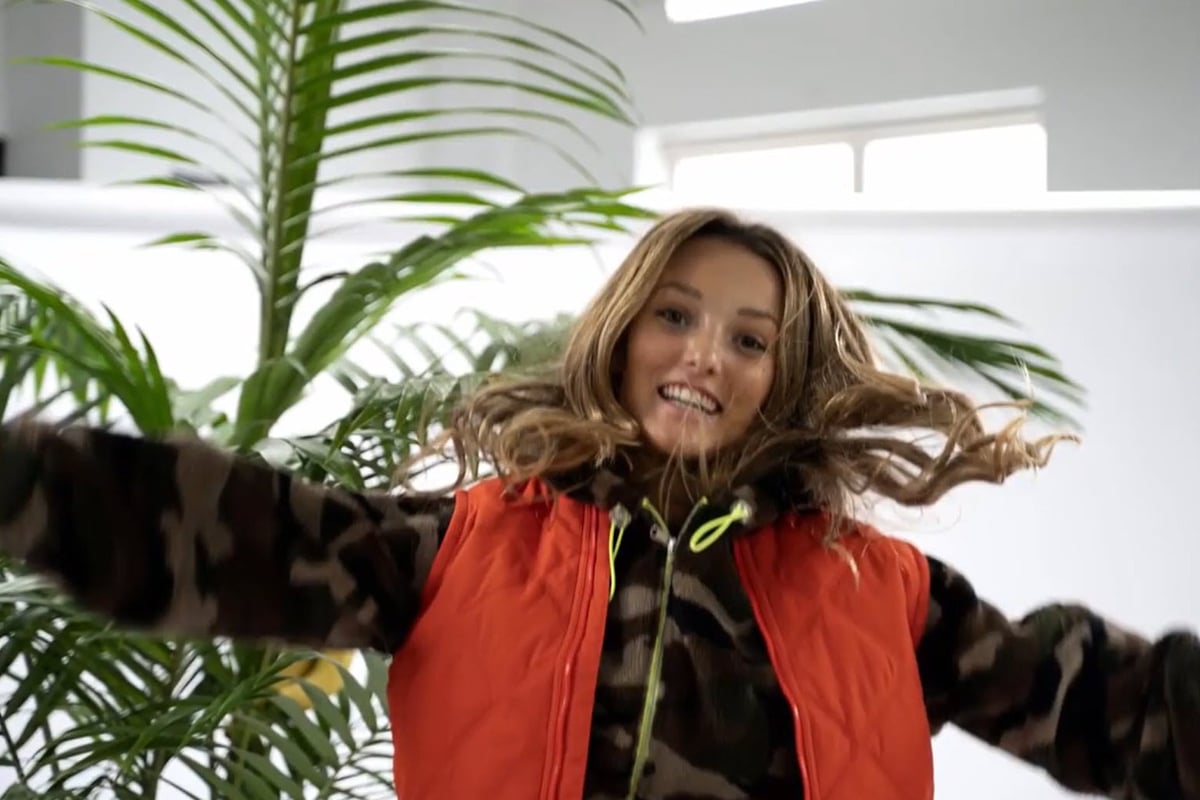 Alex easily wins the challenge, and he didn't even need a beret.

He has chosen his favourite jazz bar as the location for his date with Eliza. He says he has trouble flirting and progressing relationships with women, which is something he hopes she can help him with.

Eliza does not know what a jazz bar is, but she knows it has a piano and pianos are expensive ya'll!

Her ideal date is ice-cream and sunsets, to which Alex responds by... eating a fig. Eliza says he is different to all the other guys she's dated, who all cut up their figs beforehand.

He also does not have any tattoos, but jokes about getting one on top of his head where he is balding.

He then APOLOGISES to Eliza that she ended up being paired with a bald guy and NO, ALEX. DON'T YOU DARE APOLOGISE.

Eliza says bald people are a "vibe" and you'd rather bald than... someone with no hair.

HER HEART IS IN THE RIGHT PLACE.

Alex then plays the very expensive piano and as someone who learned 'Twinkle Twinkle Little Star' on a keyboard in her youth, I am impressed. 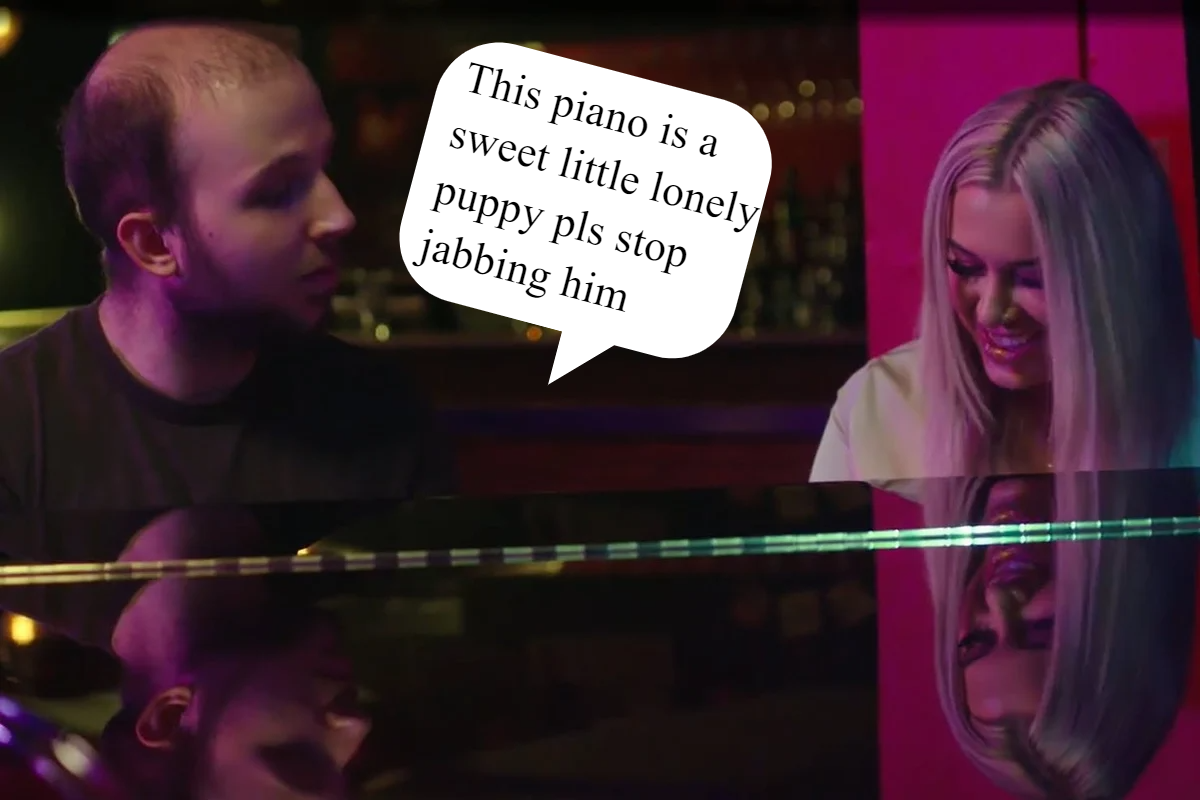 "YOU ARE WACKING A PUPPY." Image: Nine.

They play together and then Alex gets... sweaty. And also nervous. And also more sweaty and more nervous.

He opens about his dad's death and how he took up piano to continue his dad's legacy of music within their family, and I'm... definitely crying.

AND IT'S ALSO BOOK WEEK SO OF COURSE THIS MAN IS DRESSED AS DUMBLEDORE. 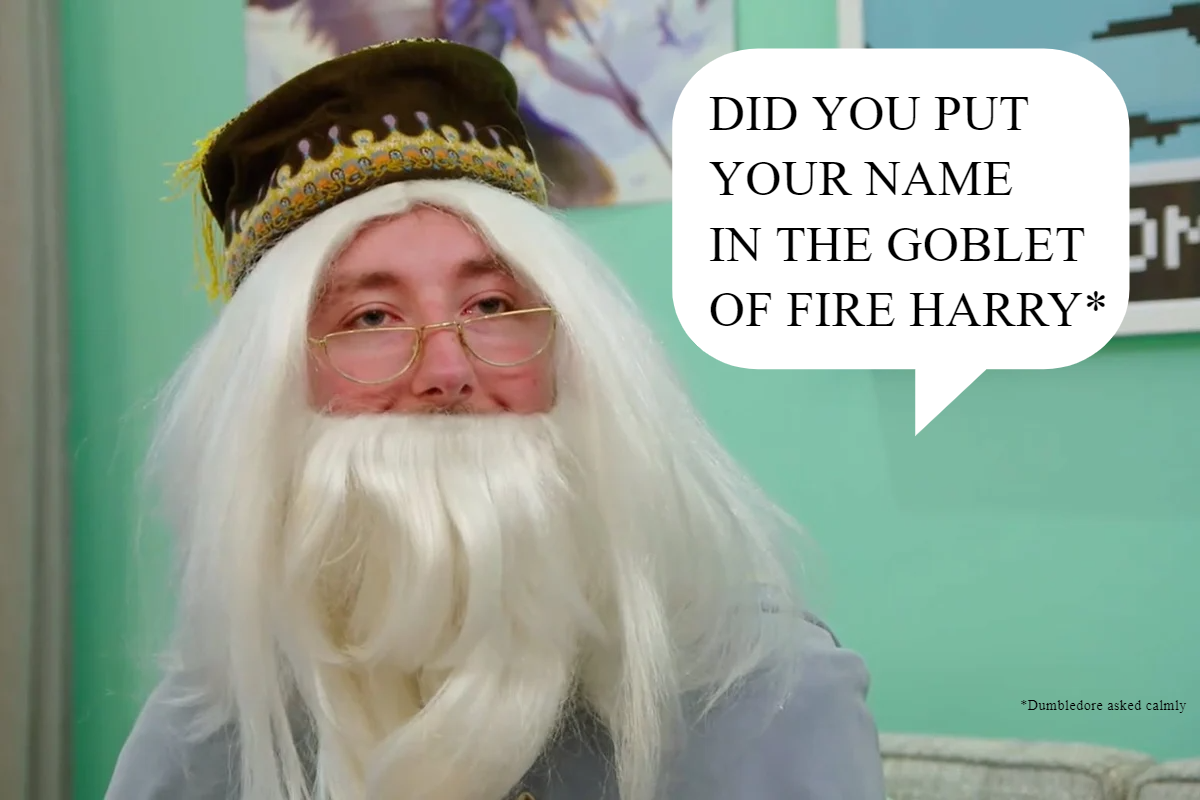 They arrive at a cinema that has been transformed into a library, and even though there's no Dewey Decimal System in sight everyone seems pleased.

Sophie does a Where's Wally gag with Lachlan and honestly, I fell for it. 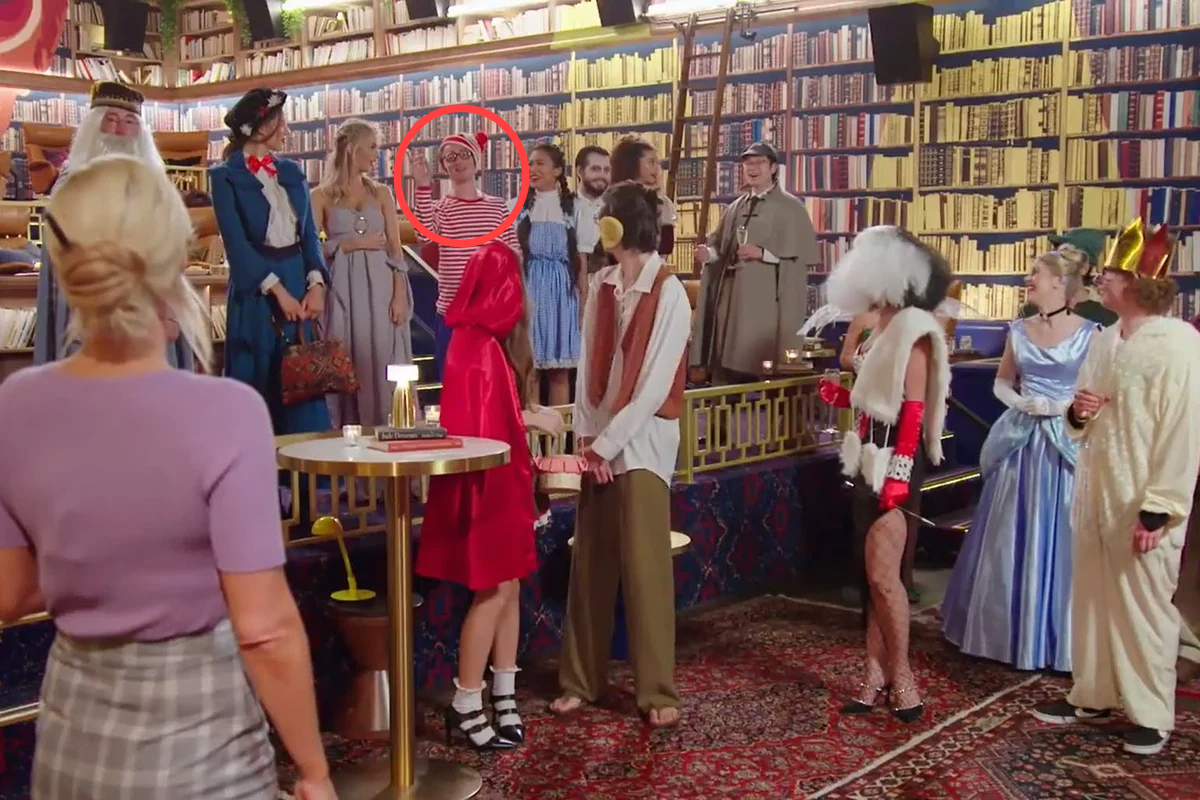 I was like, OH MY GOD SOMEONE HAS GONE MISSING.

IS THERE GOING TO BE DRAMA?

Alex spends the mixer acting like Gollum, and none of the beauties... get it.

1. I demand they have a Lord of the Rings marathon ASAP and,

2. How WEIRD would it seem to see a man acting like that without the context of the films?

Elsewhere, Mitch/Willy Wonka sings 'The Wondrous Boat Ride' so convincingly I half expect an Oompa Loompa to pop out from behind him, but the other's reactions to it are my favourite part: 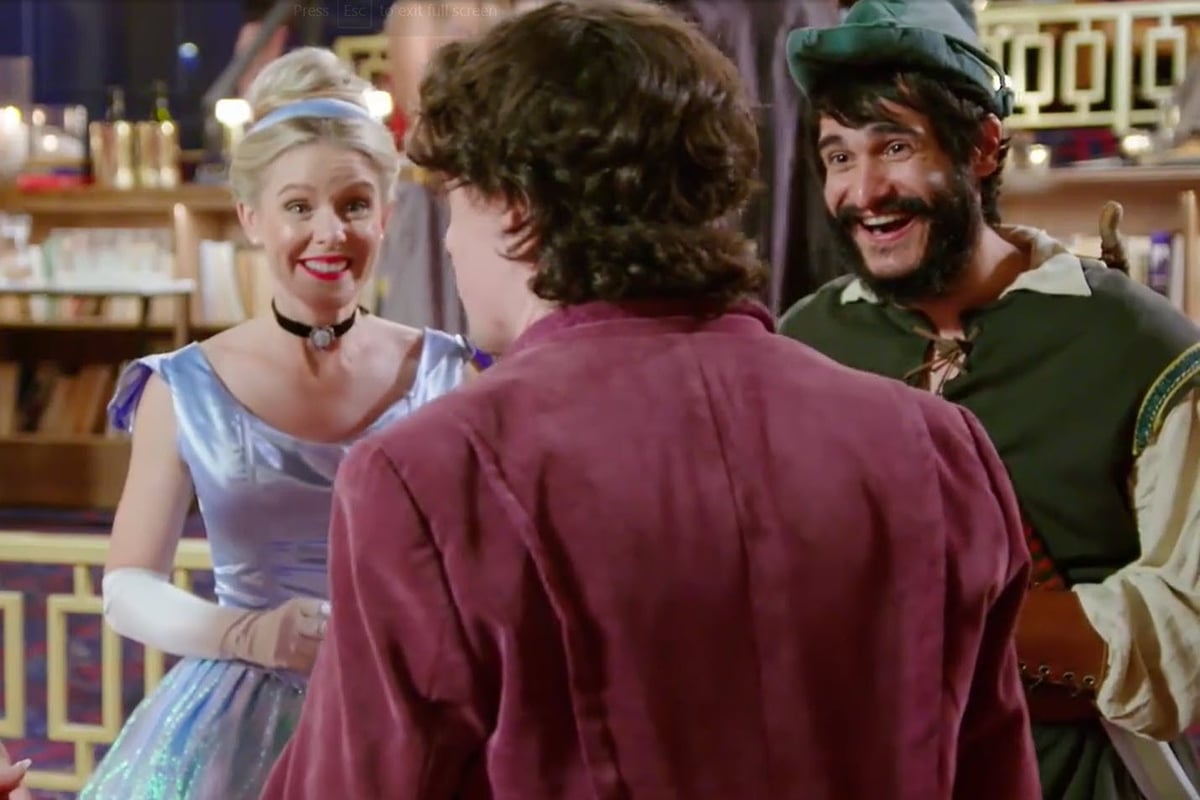 "THIS IS SO NORMAL" Image: Nine.

Sophie says Mitch's voice is amazing and he says "yes".

Bryanna and Kiran are getting along well, and oooooooooooooh we might have our first hint at ~romance~

We learn Kiran is a long-time introvert who has become too comfortable in his own company, and he's ready to reach out and make connections.

He says he likes seeing Bryanna's beautiful smile and MY HEART IS BURSTING. 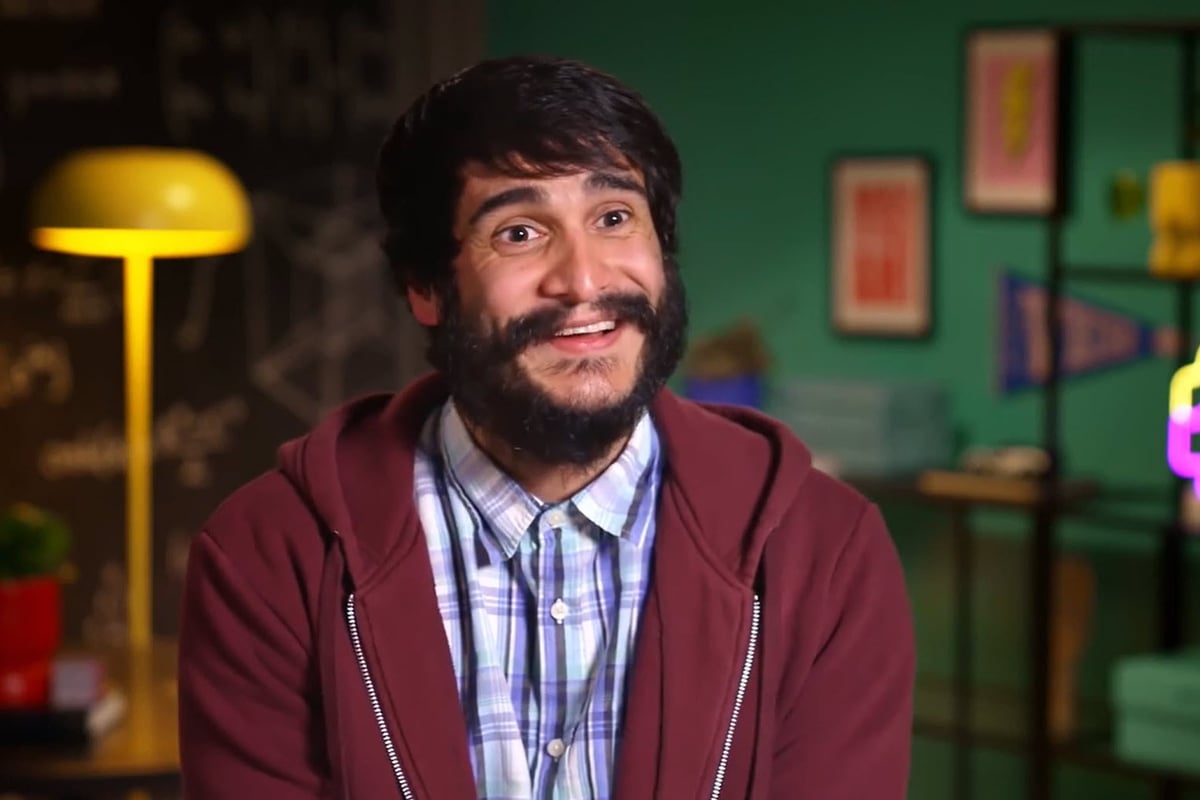 HIS SMILE WHEN HE TALKS ABOUT HER SMILE I CAN'T Image: Nine.

He shoots his shot and IT WORKS.

SHE'S INTO HIM TOO.

Lachlan, who "parties hard but not often", is asleep in his chair while Jackson tells Jessica about his podcast all about sliced bread.

Jess is digging Superman James, who is dressed as Harry Potter tonight.

She's a reporter who cannot recite the table of elements and she and James get along well.

They play with their wands... and then Sophie arrives for shuffling time.

SORRY KIERA BUT I THINK YOU'RE LOSING YOUR SUPERMAN TONIGHT.

Alex and Eliza are split, because even though they're a beautiful slow roasting beef brisket there are other culinary flavours out there to enjoy.

His words, not mine.

He's paired with Leticia, and Eliza partners up with Kyle.

Mitchell and Ashleigh remain together and all is well in the world.

Kiera and George are partnered together.

Bryanna and Kiran remain together and James is paired up with Jess, WHICH MEANS WE MIGHT GET SOME LOVE IN FUTURE EPS.

BRING ON THE KISSING PLEASE.